Elephant in the City 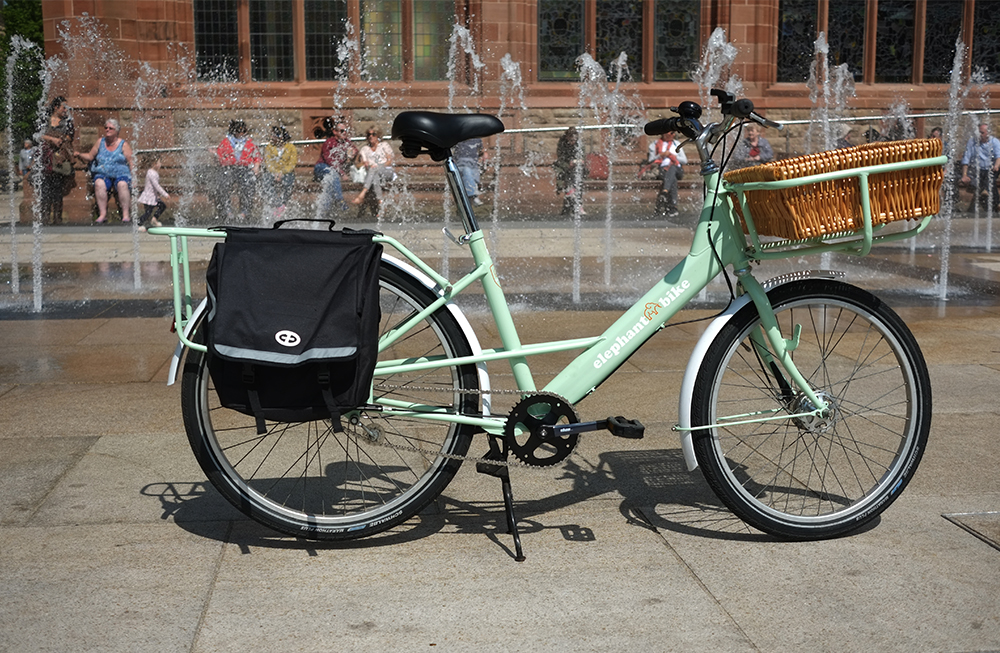 Meeting up with a friend in Derry for lunch yesterday, I was struck by the number of cyclists out and about. On the path by the river especially, they whizzed past us with merry abandon - a blur of fluttering garments and large wicker baskets... Wait, what! Wicker baskets?

While cycling in Derry has certainly been on the rise for these past few years, it hadn't quite normalised to the point of everyday clothes and full-on wicker basket mode last time I checked. So what bikes exactly were these? When yet another mystery rider went by, I turned to face the path and recognised it immediately: an Elephant Bike! 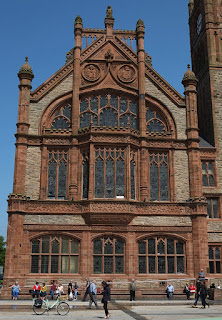 So excited I was to find out where these bicycles came from, that I took drastic measures... I followed one of them through the streets. And it led me where else, but to the city's Guild Hall. Ooh this conspiracy ran deep!

With some trepidation, I entered the grandiose structure and found myself in an echoey chamber with carved oak walls and stained glass windows.

"Just what is this wicker-basketness all about?" I asked the helpful gentleman at the desk, in hopes he would not think me insane. The answer made my day.

Turns out, the Derry City Council has organised a scheme to get bicycles for their staff, enabling them to run errands by bike during the work day. How wonderful is that? The programme was launched on the 16th of April, so it's a fairly new development. It was lovely to see them in use already.

In addition to a small fleet at the Guild Hall for government employees, more Elephant Bikes are available at the Tourism Office for the general public. They can be rented by the hour or by the day at very reasonable rates. Considering that Derry has no bike share programme, this is most excellent news for anyone who wants to visit the city and travel around by bicycle. 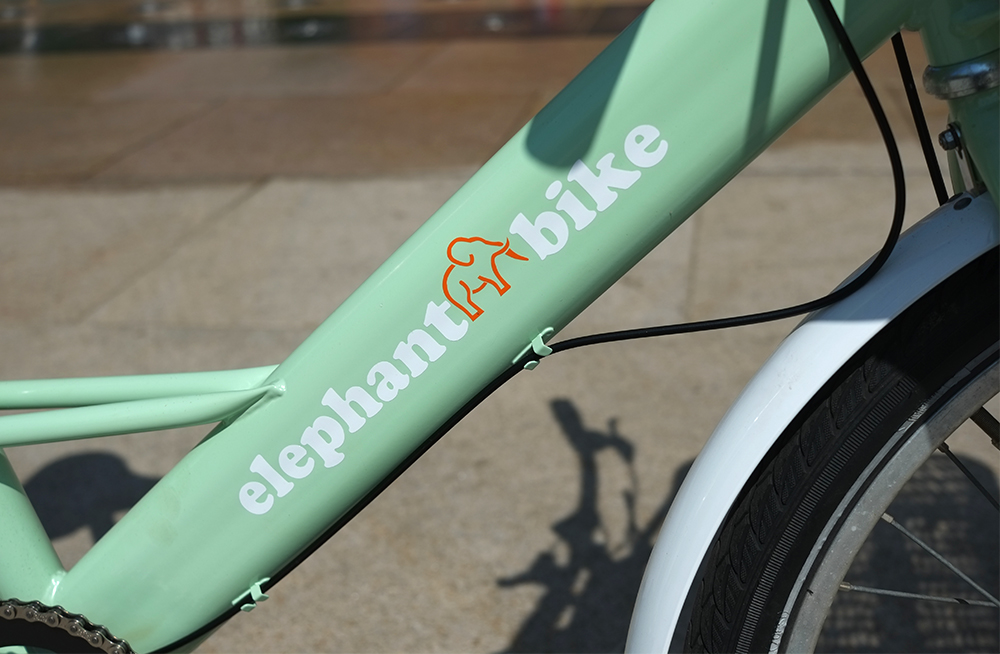 But to backtrack a tad, what are these bicycles exactly?

Elephant Bike (not to be confused with the custom framebuilder Elephant in the US) is a UK charity initiative. It collects decommissioned Royal Mail bicycles, refurbishes them for civilian use, then resells them within the UK. And for every bicycle sold locally, another one is donated to a social enterprise in Malawi through the Krizevac Project. I have a policy of not promoting causes and charities here, and so I mention all this solely in the context of describing the bicycle. But if you are interested to learn more, please do visit the Krizevac Project and have a look for yourself. 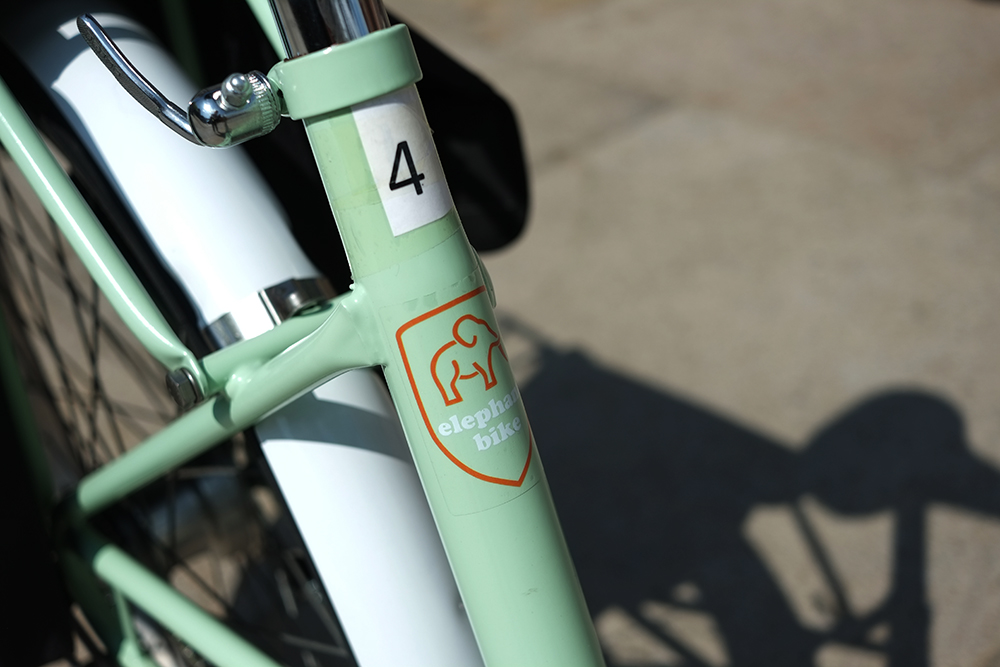 Elephant Bikes begin life as postal bicycles for the Royal Mail, handbuilt by Pashley Cycles in Stratford-upon-Avon (I featured one of these here earlier - albeit an older model). After about 10 years in circulation, the postal bikes are taken out of commission. And it is this decommissioned stock that Elephant has collected - some 20,000 units in all.

Those machines that are deemed salvageable are then sent to be worked on by inmates in a local young offenders prison, where they are stripped of parts and paint, as part of a skill-building initiative. The framesets are then powdercoated, and finally re-assembled in-house with a mix of new and refurbished parts. 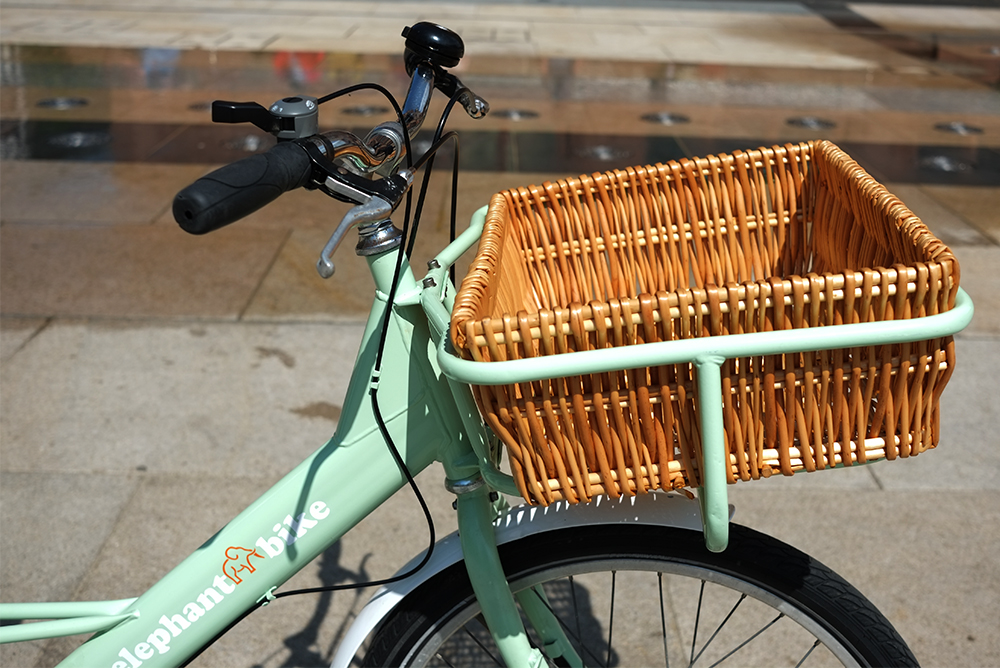 The bicycle, in its finished state, looks so shiny and new and pretty, it is difficult to see it as refurbished, or decommissioned, or as a charity project. It looks like a gorgeous, heavy-duty transport bike that anyone looking for a capable sturdy machine would be happy to own. And happily own it they can - for the price of £250. 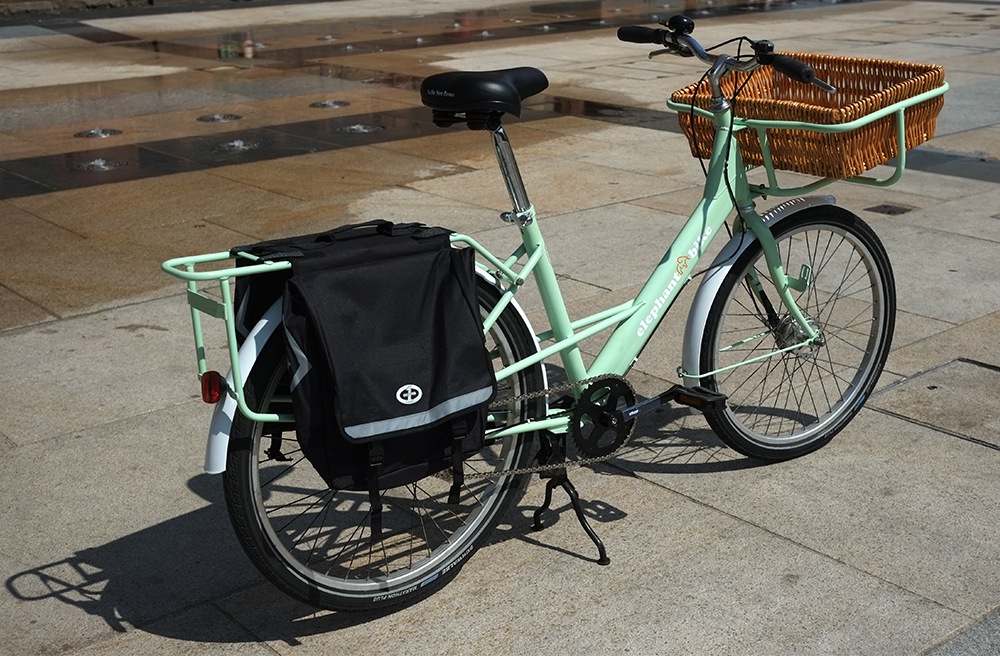 You read that correctly: pay £250 for what is essentially a Pashley Mailstar/ Pronto with custom paint. Oh, and free postage within Great Britain. With the Pashley Pronto model still very much in production, consider that new ones retail at £650. Its charitable function aside, the Elephant Bike is an amazing bargain. And did I mention the pretty colours? They are available in sage (shown), turquoise, or olive. And in a selection of two unisex frame sizes (18" or 22"). You can buy online, and current wait time is 3 weeks. 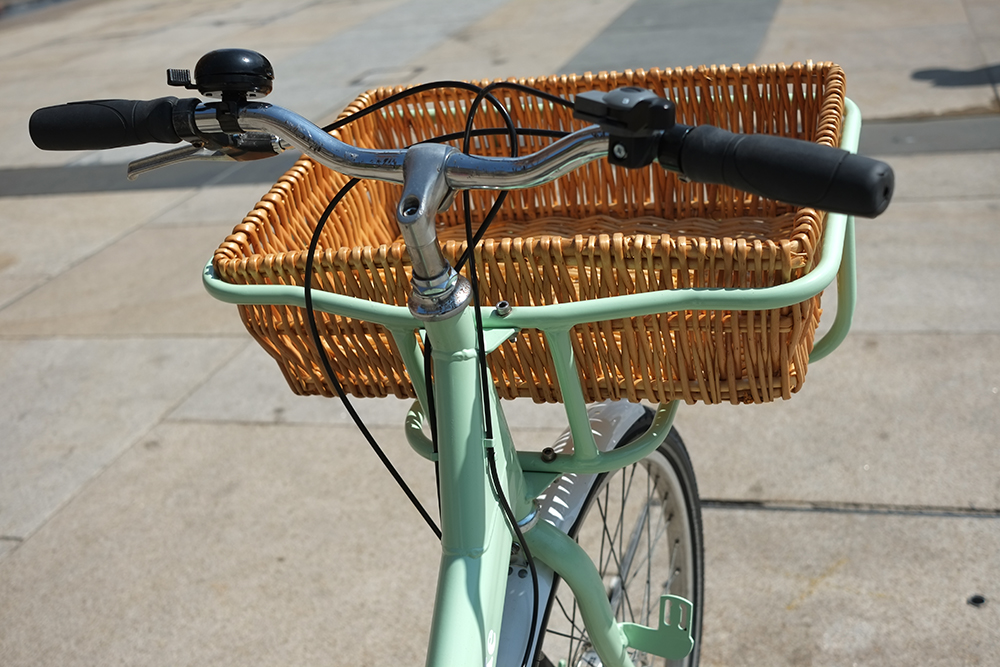 Accessories included mudguards, a double-legged kickstand, and a bell. There is no dynamo lighting. However, the original fork-mounted headlight bracket remains for affixing a battery light. 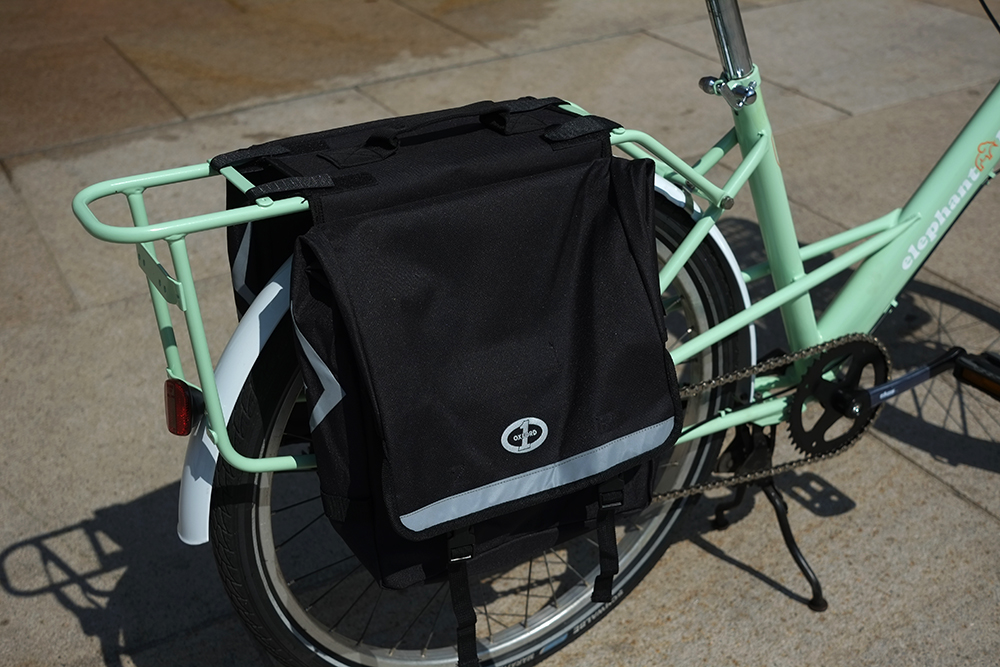 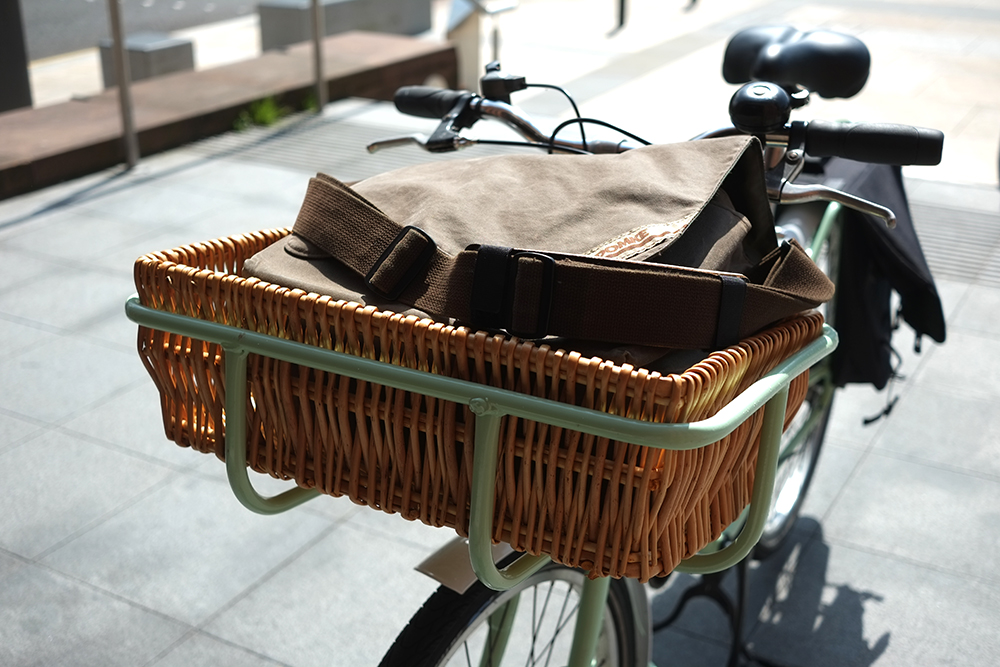 Never having ridden a Pashley Pronto of this era before, I was achingly curious to try the Elephant Bike. Understandably though, the Derry City Council staff were kind of skeptical of me ("Which publication did you say you were with again, Miss?.."). Still, I was allowed to pedal around the square while remaining within eyesight. And, you know what? This thing is delightful. I am serious: Delightful! The thick blocky tubes and welded construction certainly look industrial in comparison to, say, the Pashley Princess. But it is zippy and responsive as heck - so much so, that seeing postmen sprinting up the hills of Letterkenny on these things (An Post used the same machine for their postal bikes) now strikes me as distinctly less implausible. The small front wheel + frame-mounted front carry system is right up my alley, too. As is the low stepover and low bottom bracket. My favourite-handling Pashley of the ones I have tried to date. 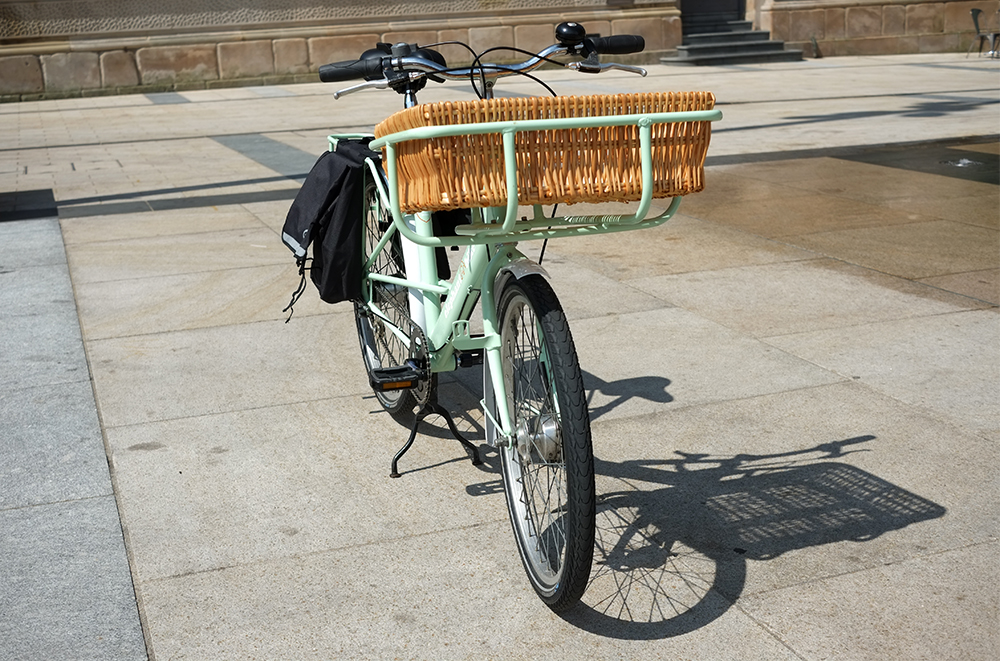 Later, I had a chat on the phone with Terry Richards of Elephant Bike (an exceedingly pleasant man to talk to) and learned some interesting things about their future plans. For instance, they hope that the wicker baskets - which are sourced now from a mass production facility - will soon be made in Malawi by hand.  They are also working on an in-house pannier design to fit the long rear racks, and that too shall be made in Malawi.

Finally, and this is only an idea at the moment, but some of the older (read: lugged and vintagey) postal bikes, if enough of them are gathered up in a salvageable state, might eventually get refurbished as well, and sold as a limited edition batch of perhaps 100 bikes maximum (the current production bikes are a limited run of 5,000).  I suspect there might be quite a lot of interest in that!

We also discussed the bikes' availability. For reasons to do with insurance policies, at the moment Elephant Bikes can only be posted within the UK (within GB at no cost, and to Northern Ireland for a small surcharge). But if you live elsewhere and want one, it is not impossible to obtain it - if you know someone with a UK address who'd be willing to forward it to you (remember that shipping to them would be free, so you'd only have to pay the one-time postage). You could even ask a UK bike shop to undertake this task for you, in the process encouraging them to become an Elephant Bike dealer! 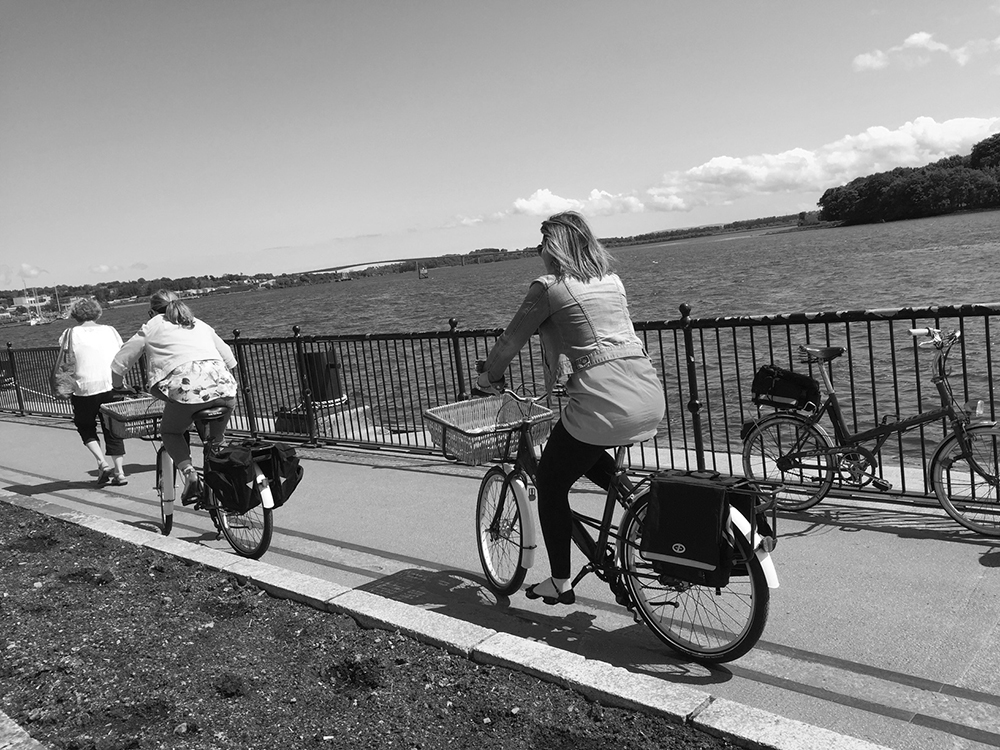 In the course of a month, the presence of Elephant Bikes in Derry has changed the city's velo-landscape visibly, and that to me is very exciting. Visitors - whether locals in the city for the day, or tourists from afar - can now cycle about the place easily. And it's nice to see that, when given the opportunity, they do indeed cycle about the place. Derry is fantastic to explore by bike.

I hope to see more of these lovely machines, everywhere, until all the discarded postal bikes are brought back to life and put to good use. With thanks to the Derry City Council for trusting me with this bike, I wish them the best of luck with their employee cycling initiative. And I wish Elephant Bike folks all the best of luck with their charity work. For a complete picture set of the bike I rode, see here. And visit Elephant Bike online to learn more.