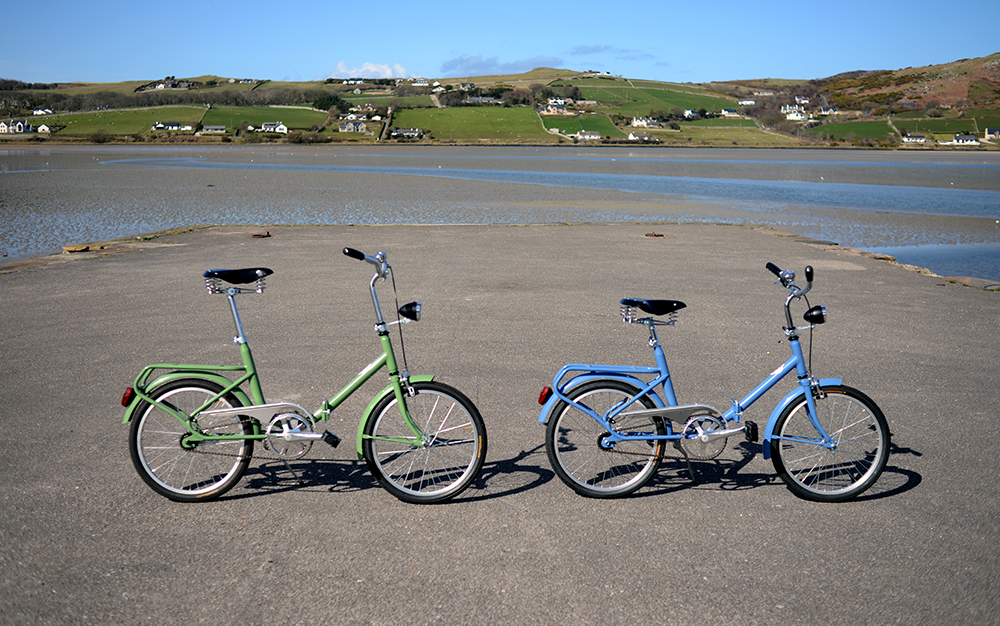 We spotted them through the window of the Narosa surf shop in Dunfanaghy. "Oh look," said my friend AJ, "they have a couple of vintage folding bikes in there. Can you tell what make they are?" Cupping my hands and peering inside, I scrutinised the pastel-coloured frames but could not identify their make. And as the shop was closed for the winter, we could not get in to have a closer look. But through the storefront AJ took a snap with her phone, zoomed in to read the writing on the unfamiliar-looking badge, and set off to investigate - with surprising results! 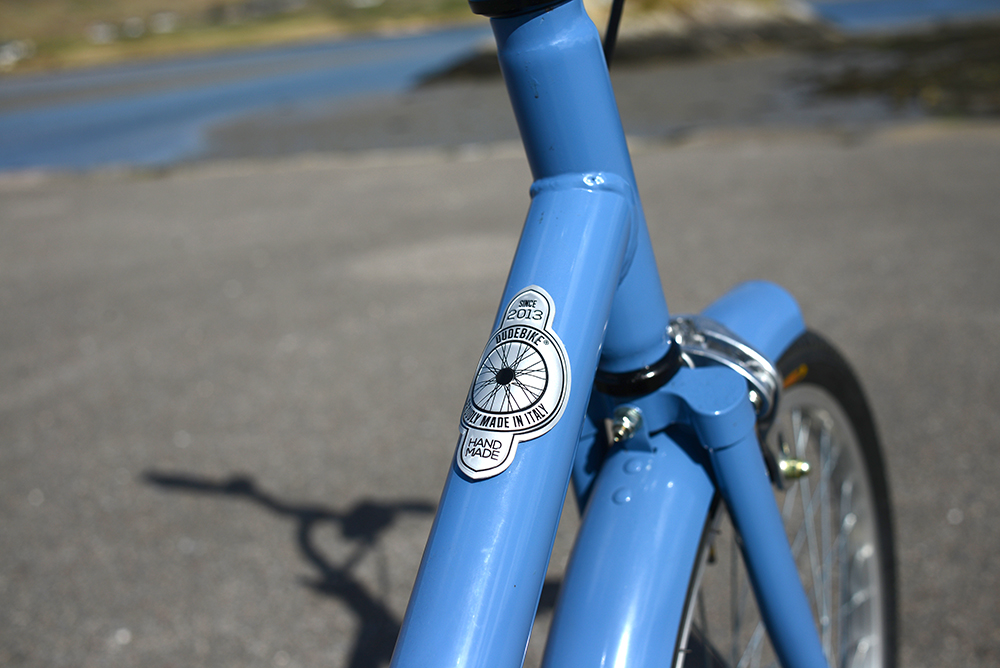 They were Italian folding bikes. And they were current production, not vintage. Hand-made in Millan since 2013, by the rather unexpectedly named manufacturer Dudebike (cue "Dude, where's my bike?" jokes) and priced at €385. At current conversion rates, that is less than $450 USD, and just over £300. 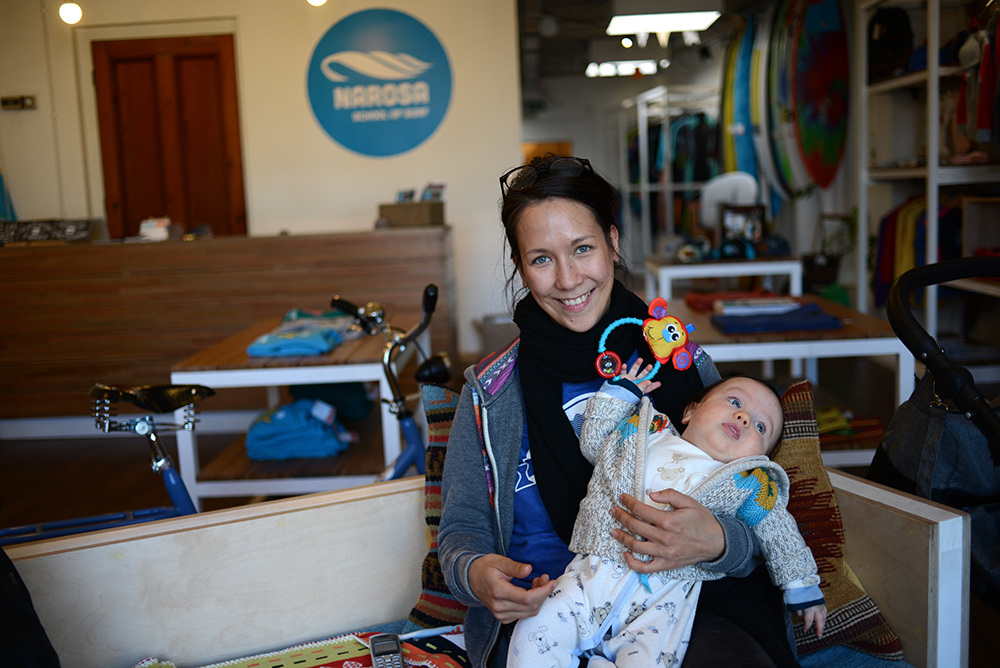 Intrigued, we eagerly awaited a bout of good weather when the Narosa shop would be open. By the time such a day came, word spread, and a small crowd of bicycle-loving women descended upon the shop from the surrounding towns and counties, followed by me, with camera in tow. Amusing the Narosa staff with our frenzied enthusiasm, finally we wrangled two bicycles out the door and onto the mean streets of Dunfanaghy. When the lovely Lisa and Clare graciously agreed to model the Dudebikes in motion, one feature that immediately became apparent is how widely adjustable they are for size. 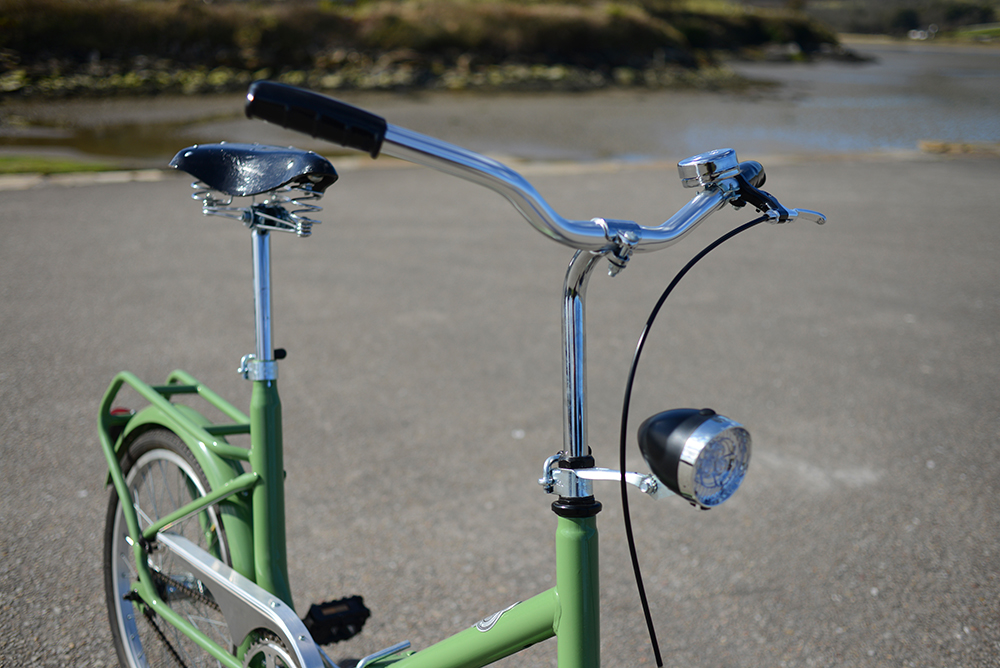 Both the seatpost and the stem can be pulled out considerably, allowing shorter and taller riders alike to ride these bicycles after some quick tweaks. With the two bikes adjusted to close to opposite extremes, they did not even look like the same bike, someone in our group pointed out -  the vastly different amounts of seatpost and stem giving them the appearance of different "body types" despite the identical frames. 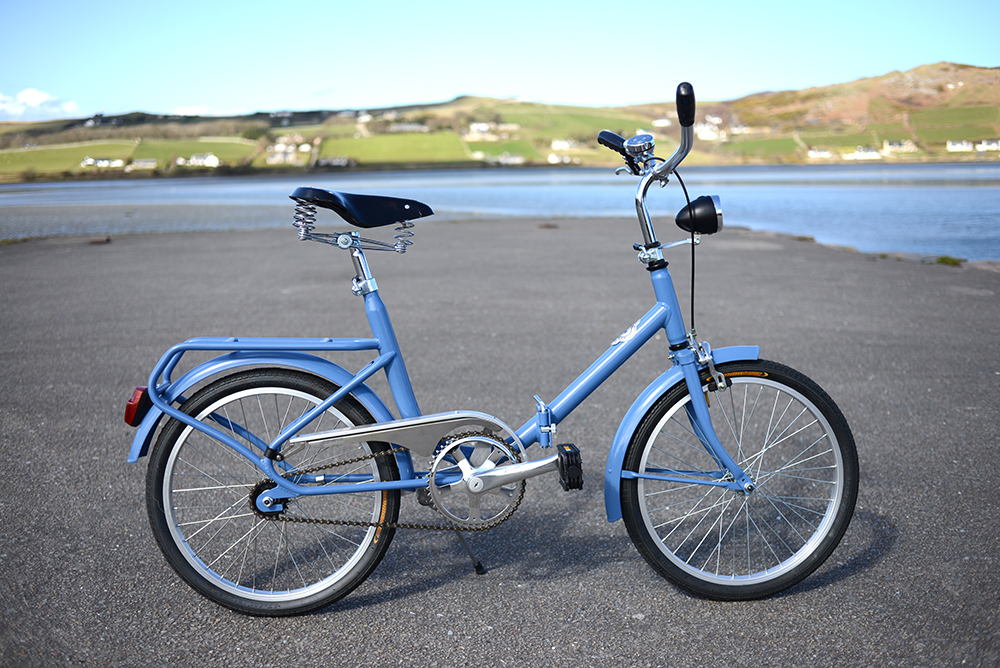 Of course the easy adjustability also accommodates riders with different handlebar heigh preferences regardless of height. So whether you want a slammed stem with lots of seatpost showing, or a sit-up-and-beg position with saddle low and bars high, the Dudebike accommodates. 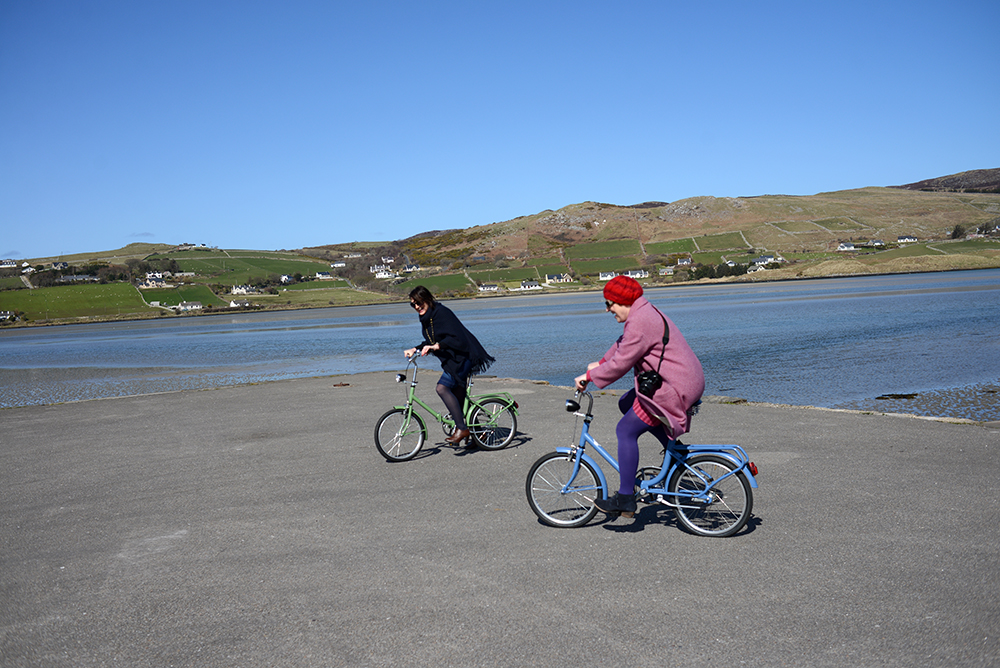 It was good to see such adaptability. And fun to see the two bikes ridden side by side - a whirl of small wheels, pastel frames, and shiny chrome bits glistening in the mid-day sun. It was equally fun watching the riders discover the joys of the coaster brake ("oh my god, it brakes when I pedal backwards?"). Ah yes, that it does. It's been a while for me as well. 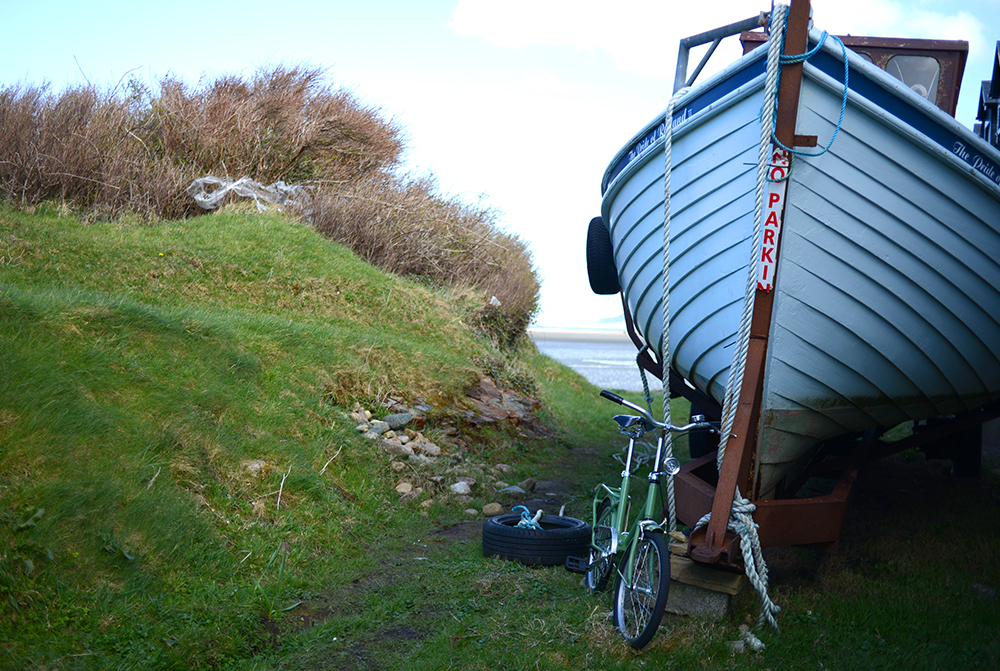 But getting back to the, erm... Dudebike itself. What exactly do we have here? If I had to guess (and I sort of do, as I can't reach the manufacturer for comment), I would say these aren't so much "retro" bikes - in the sense of modern bikes being made to aesthetically resemble vintage ones - as actual "vintage" bikes, whose production in whatever small factory used to make them back in the day has simply been re-started after a break of several decades.

In construction and geometry the bicycles look indistinguishable from older continental European folders. And the ride feel too, I must say (I test rode the green one on a spin around Dunfanaghy centre), is very similar to an actual vintage bike of this type. While of course the wheels, components, and frame tubing are modern, I believe the construction method and geometry are the very same as would have been used to make such folders in the 1970s. 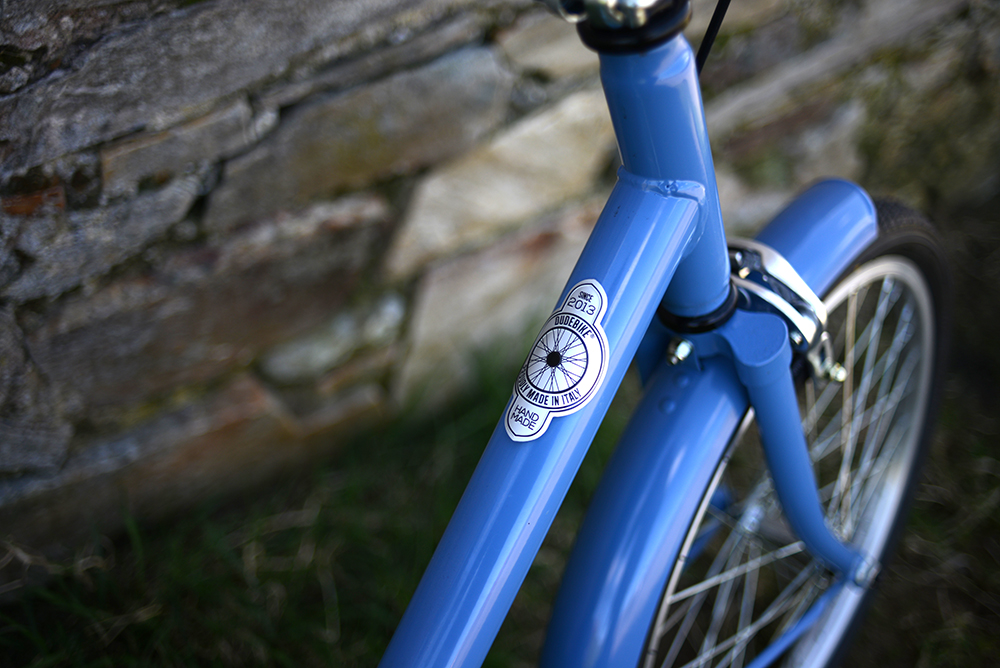 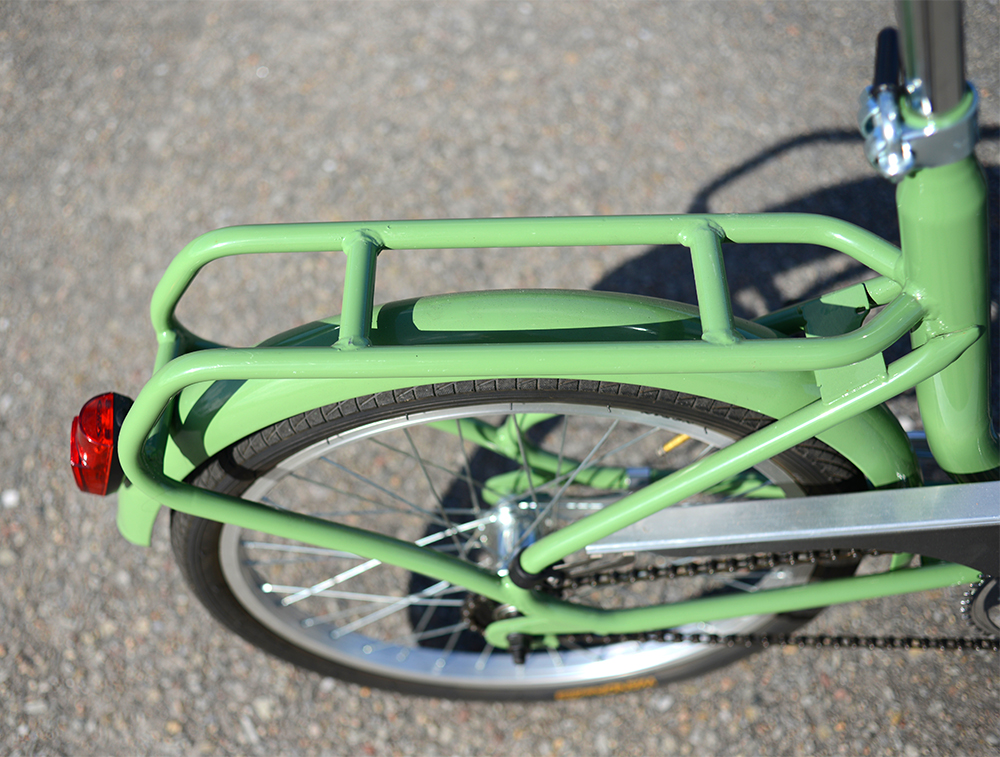 and integrated rear rack, makes for a 12kg (26.5lb) bicycle, according to the manufacturer's spec - which isn't exactly lightweight, but is certainly reasonable (for comparison, the Brompton is in the 20-25lb range, depending on configuration). And it is certainly lighter than the folders produced in decades past. 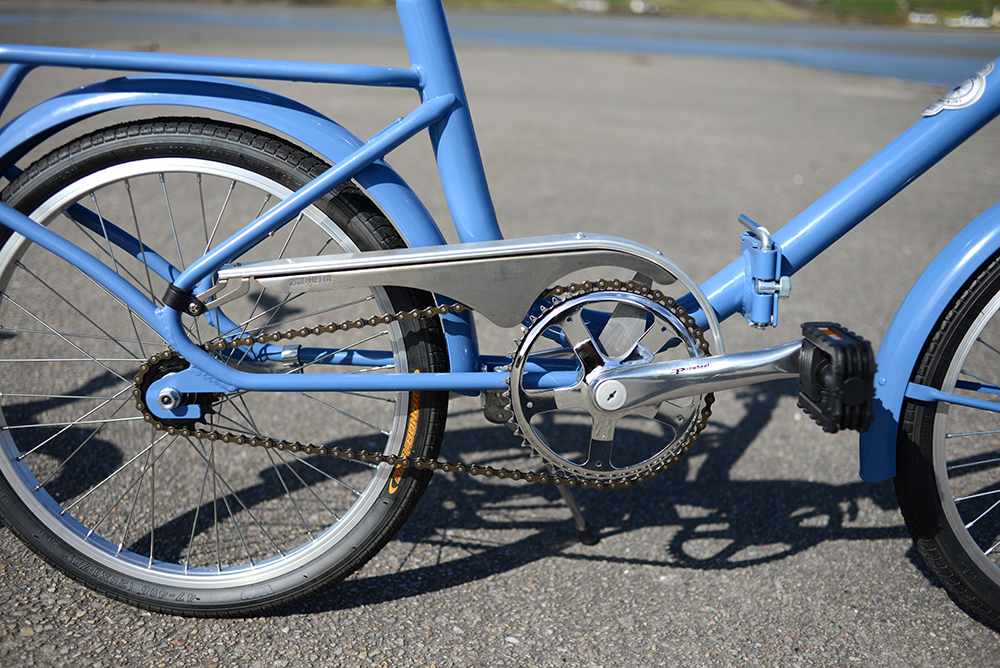 The single speed drivetrain with coaster brake (rear hand brake available instead on request), is of course limited, but in line with a bicycle that's designed for scooting around towns and beachfront areas without much in the way of hills or long distance involved. The 41/18t gearing is easy to push on flats and not too bad on reasonable inclines. 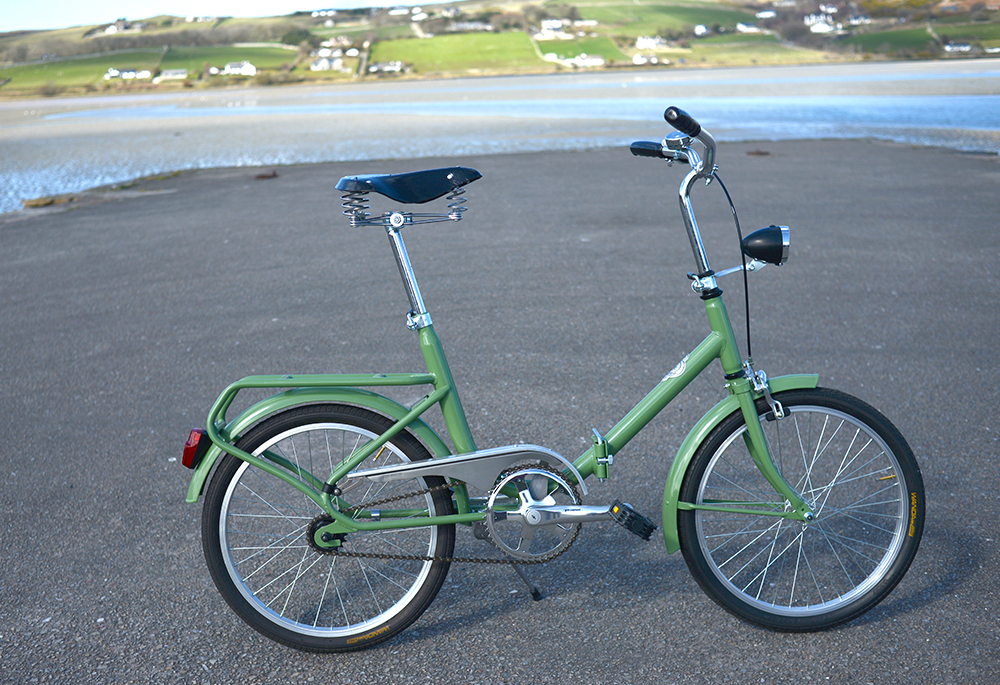 It is also quite nice that this bike comes fully equipped for commuting, with full, colour-matched mudguards, wide (20"x 1.75") tyres, a chain guard, rear rack, 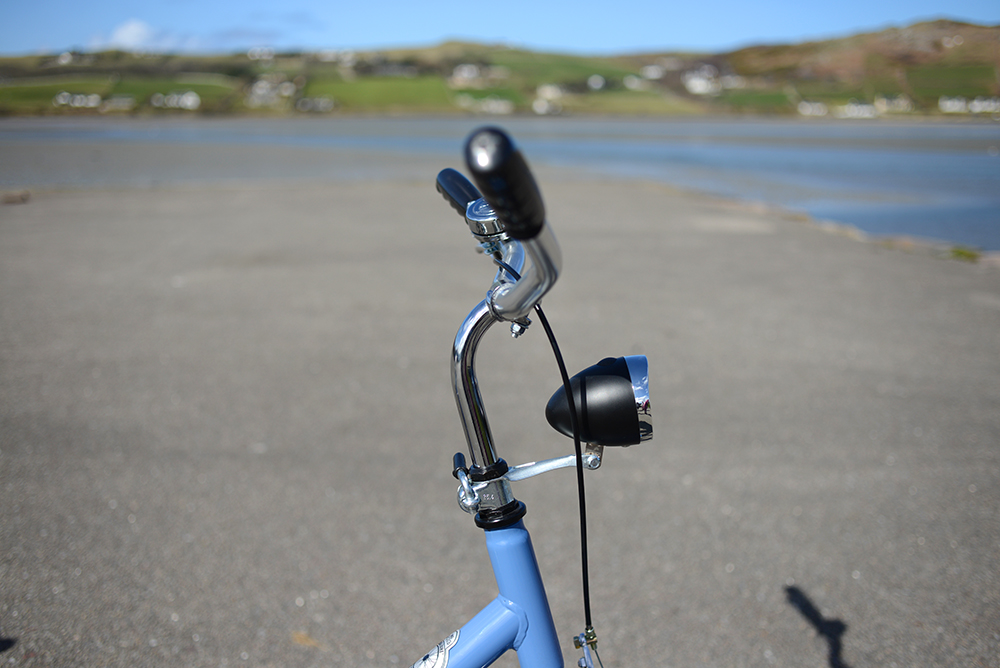 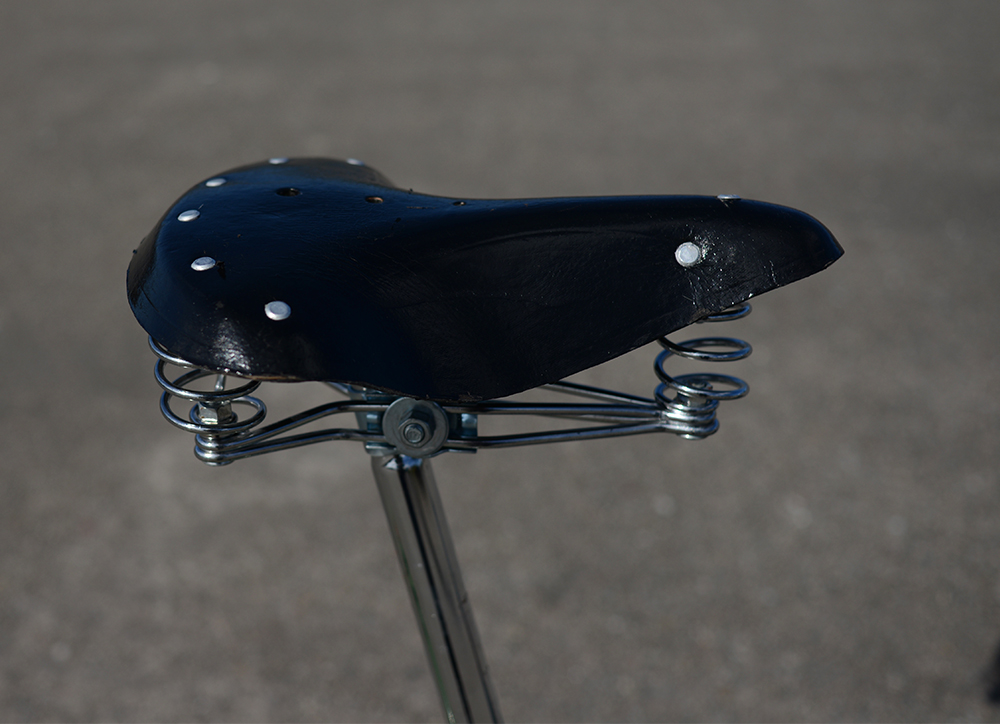 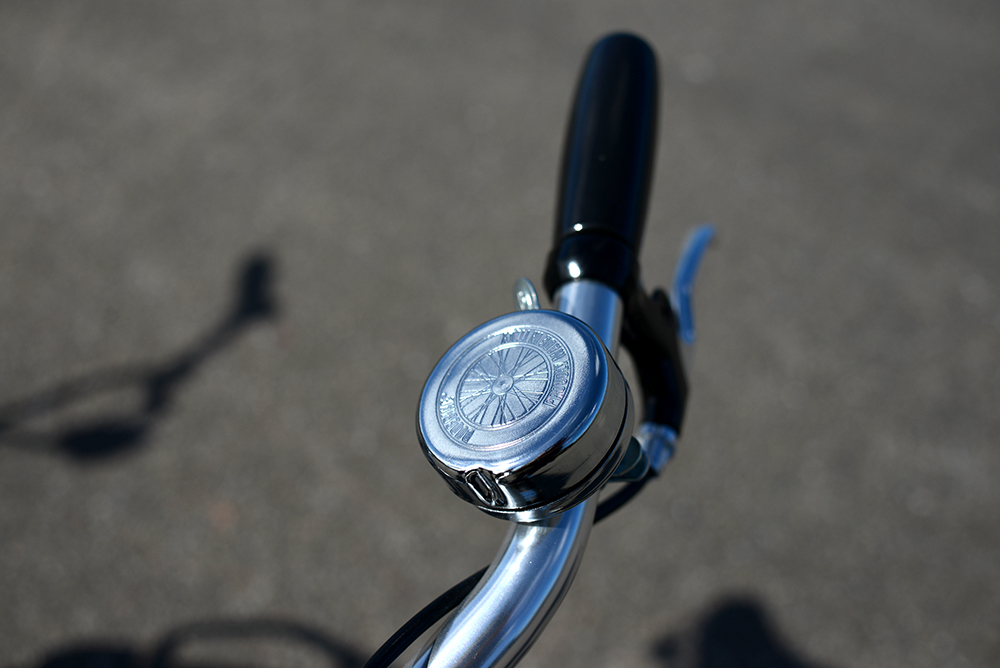 The fold itself is a simple, middle-hinge kind of deal. Undo the bolt and swing it around, folding the frame in half, then collapse the handlebar stem and seatpost using similar bolts. 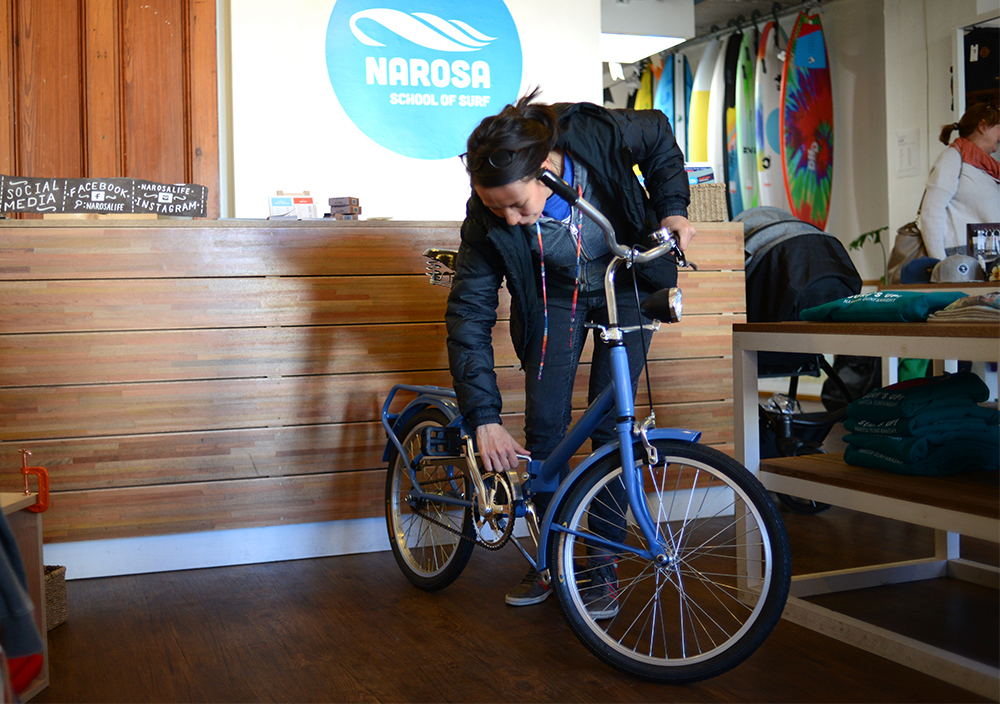 You would think I would have photos of the bike folded, but alas I do not. My bad, but here is a pic from the manufacturer's website to see what it looks like in its fully collapsed state.  To be sure, it's a hefty bundle compared to most modern folders. Nonetheless, it can be stuffed into a car, stored in a cramped indoor space, or taken onto public transport. 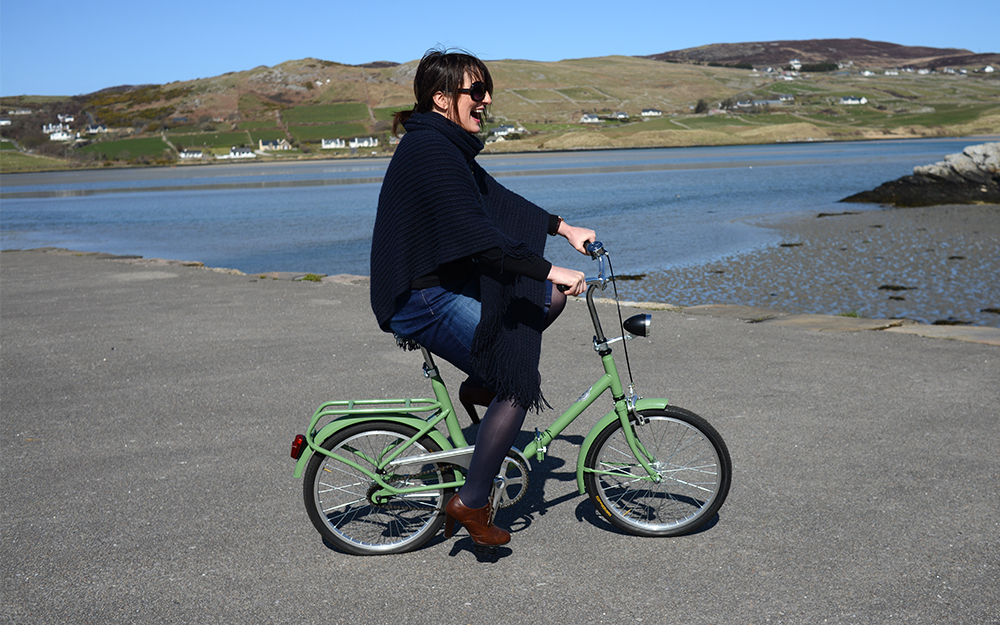 When all is said and done, the Dudebike is a traditional Euro-folder: an uncomplicated, compact, fully equipped and easy-to-ride bicycle ideal for errands, short distance commuting, and plain old cruising. It is handmade in Italy. And it costs under $500. How can I find fault?

It does concern me that the manufacturer has been quiet on social media for some time, so who knows what is in store for this brand in future. It would also have been nice to get some additional details from them about the manufacturing process and the history of the brand. Did they breathe new life into a disused factory? Hire a framebuilding outfit whose staff never thought they'd have to make another one of these things after the mid-1980s and had to dust off the crumpled, yellowed drawings retrieved from the bottom of a back drawer? If I ever find out, I will certainly post an update. 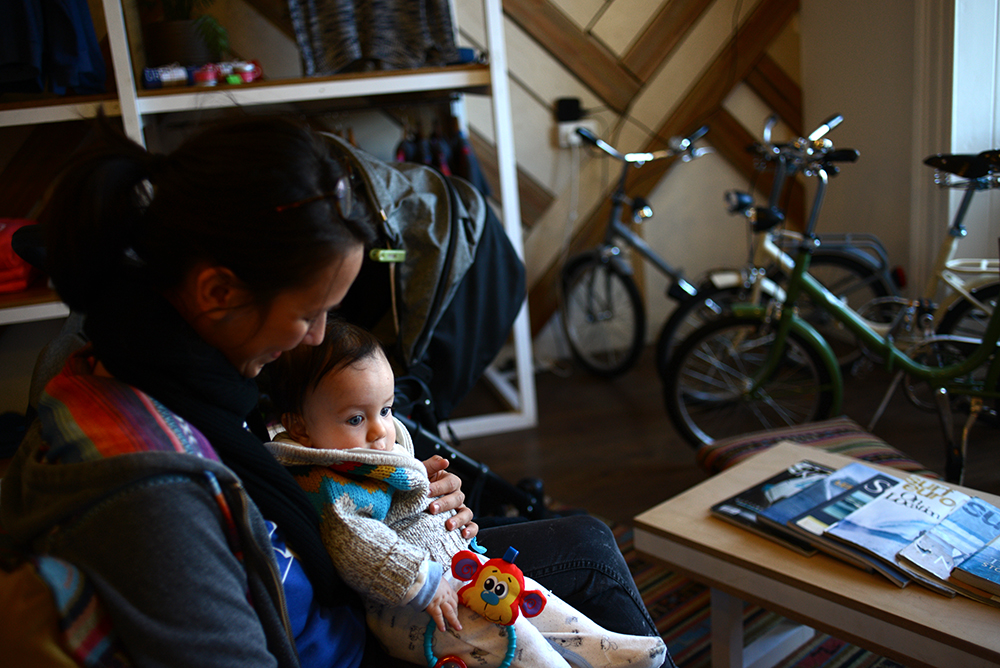 But for now, all I can tell say is that it does appear that you can purchase these bicycles direct from the manufacturer and get them shipped all over the world at reasonable prices. And, of course, if in doubt, you can always come to Donegal and buy a Dudebike from Narosa. I believe they have 4 in stock at the moment: in sage green, cream, periwinkle and gray.

My thanks to Jude, Oscar and Lee for the opportunity to test ride these bicycles! And should you ever find yourself longing to surf in Ireland, Narosa in Dunfanaghy is certainly worth a visit.