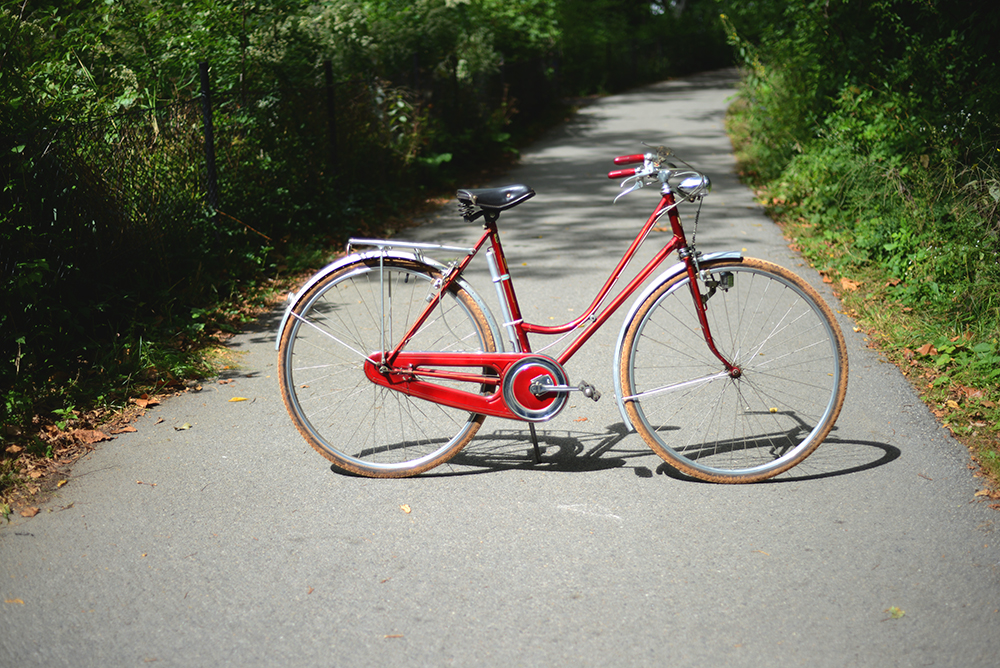 I suspect it was my exposure to Lindt Easter eggs over the weekend, with their shimmery red foil wrappers, that reminded me of her just now. But I don't believe I have ever told you about the Swiss Miss. A most beautiful - and, of course, most unusual - bicycle from the collection of Nick at Curious Velo.

Even beyond the Swiss connection, the Lindt comparison seems apt: When I first saw this bicycle it had the look, I thought, of an oversized confectionary product freshly plucked from within some giant gilded gift box, where perhaps several of such things had lain side by side in transparent tissue paper. It wasn't just red, but candy wrapper-red, with golden lettering and fanciful flourishes. And it looked utterly delicious. 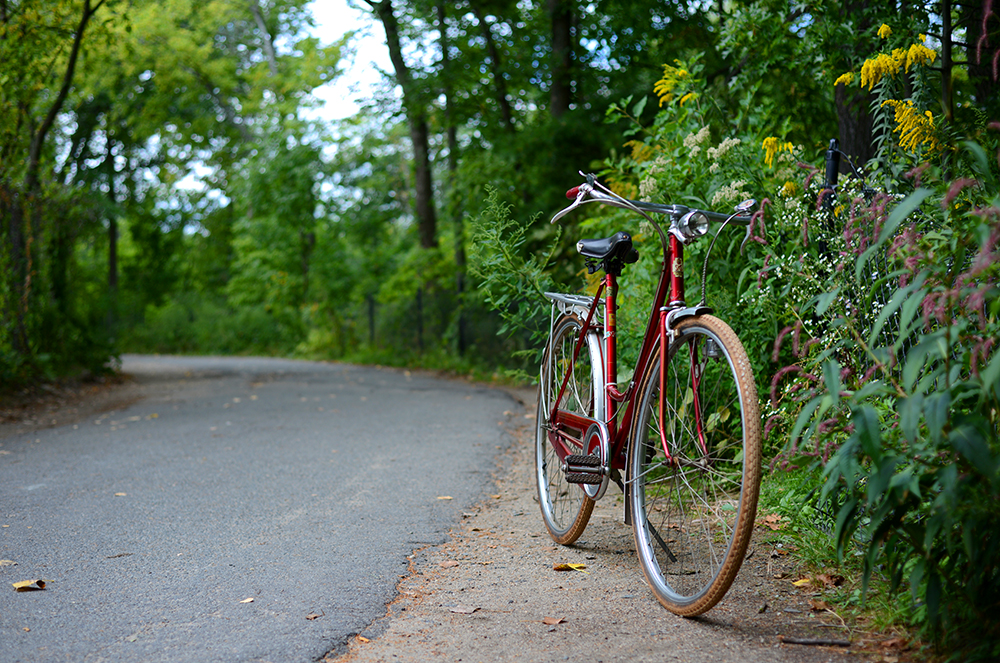 "What is it?" I immediately asked, from a distance unable even to guess its provenance. Despite the vaguely-Italian frame construction, the bike had an otherwise German look to it and the combination confused me.

"I don't know!" replied Nick, infusing that statement with the sort of urgent meaningfulness only he is capable of expressing. "But have a closer look..." 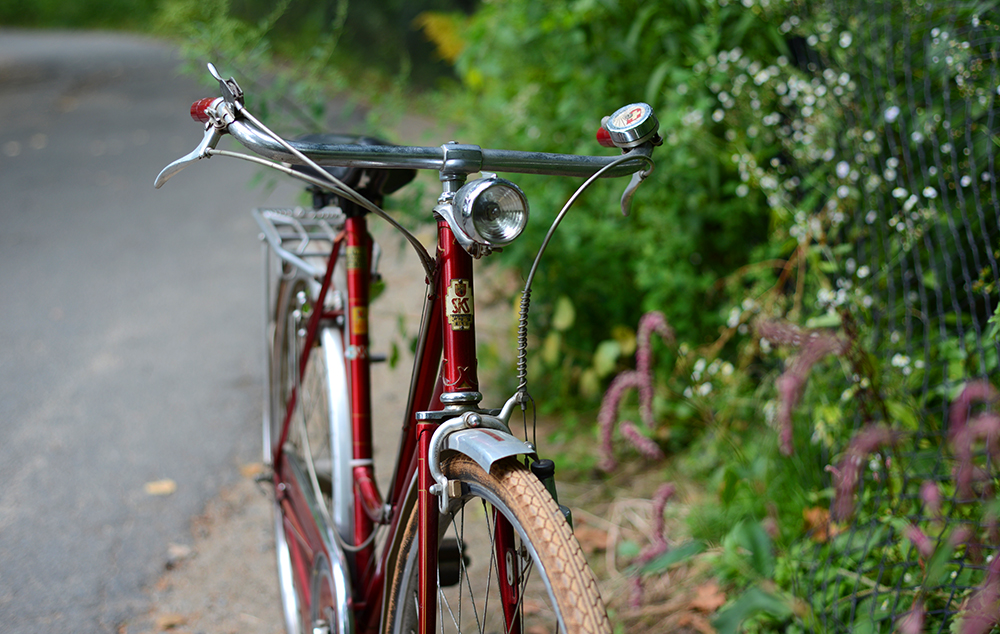 The first thing I noticed was the incredibly elaborate lugwork, of the sort not usually "wasted" on step-through frames in the mid-20th century era I had guessed this bicycle to be from. I then noticed the SKS headbadge. A German manufacturer of bicycle accessories best known for their pumps and mudguards (in the '80s they took over the British brand Bluemels), I was not aware SKS had ever made complete bikes. Most likely this was a one-off - a handmade display model made to exhibit their components? 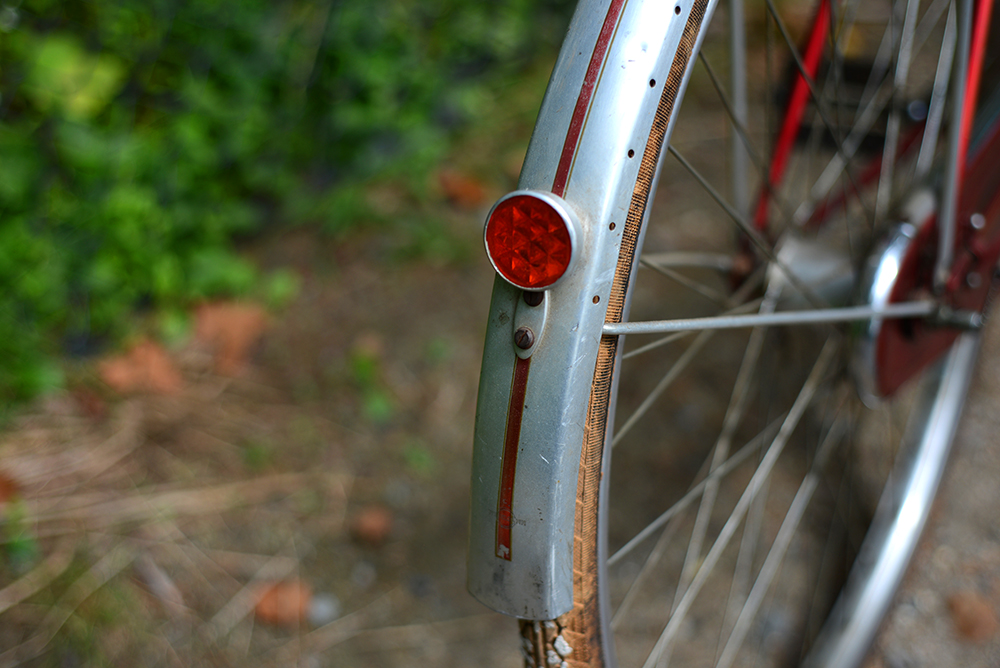 However, on closer inspection I began to notice a different theme. Many of the components - in fact nearly all of them - seemed to be Swiss. From the Weinmann rims, brakes and mudguards, 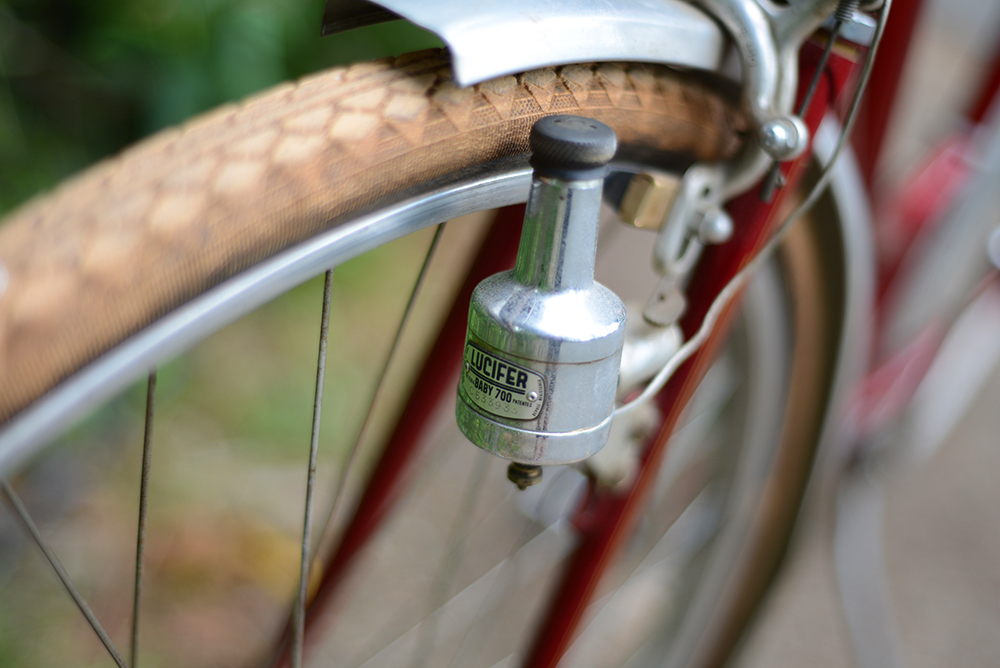 to the Pletscher rack and kickstand, and the Lucifer dynamo lighting, it seemed that Swiss parts dominated the build. 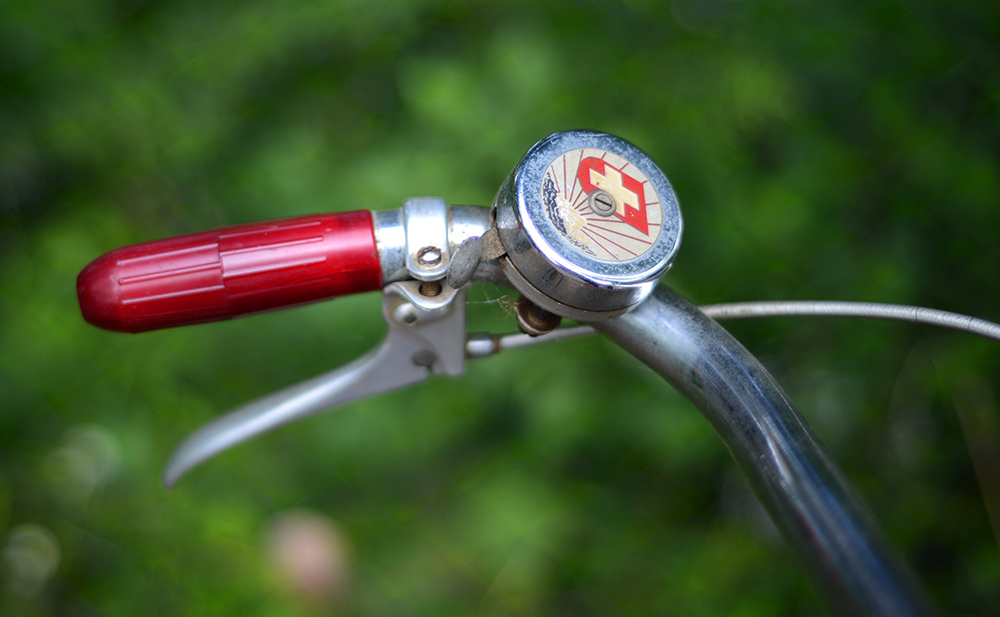 The un-branded bell was embellished with a Swiss flag. In fact, I realised, even the bicycle's coulour scheme - the red frame, the white tyres, and the red grips - reflected the Swiss national colours.

"And the hub," Nick whispered, having noticed my awareness of this, "Even the hub, I think, is Swiss! Scintilla - a Sturney Archer clone." 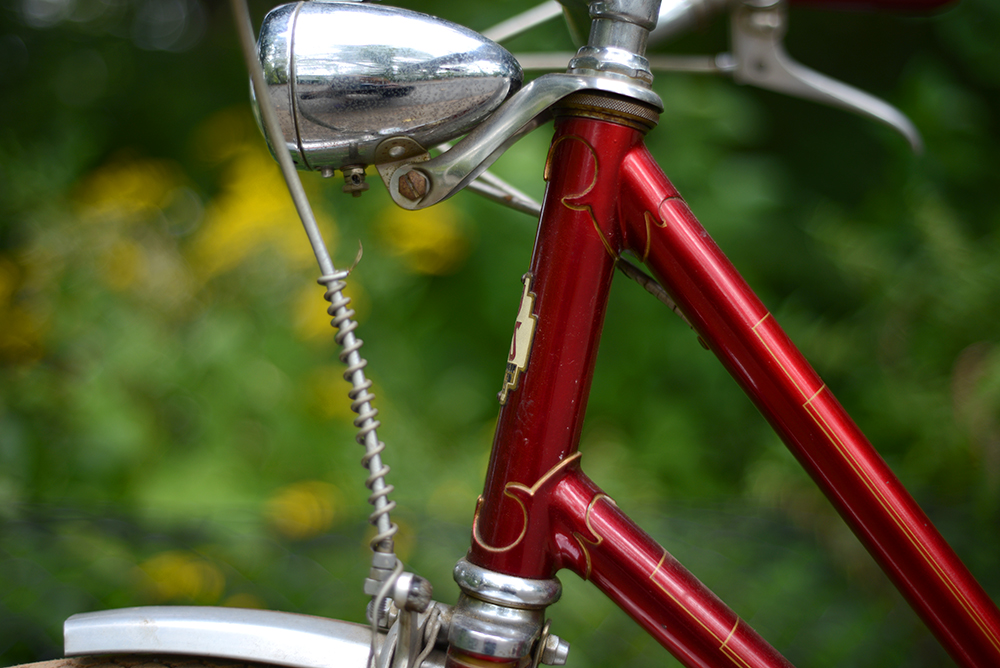 So what exactly was this bicycle and why was it so elabrately made? The Reynolds tubing, the Nervex lugs, the double-butted seat stays and the intricate paint job were above and beyond what one would normally see on a machine of this type. 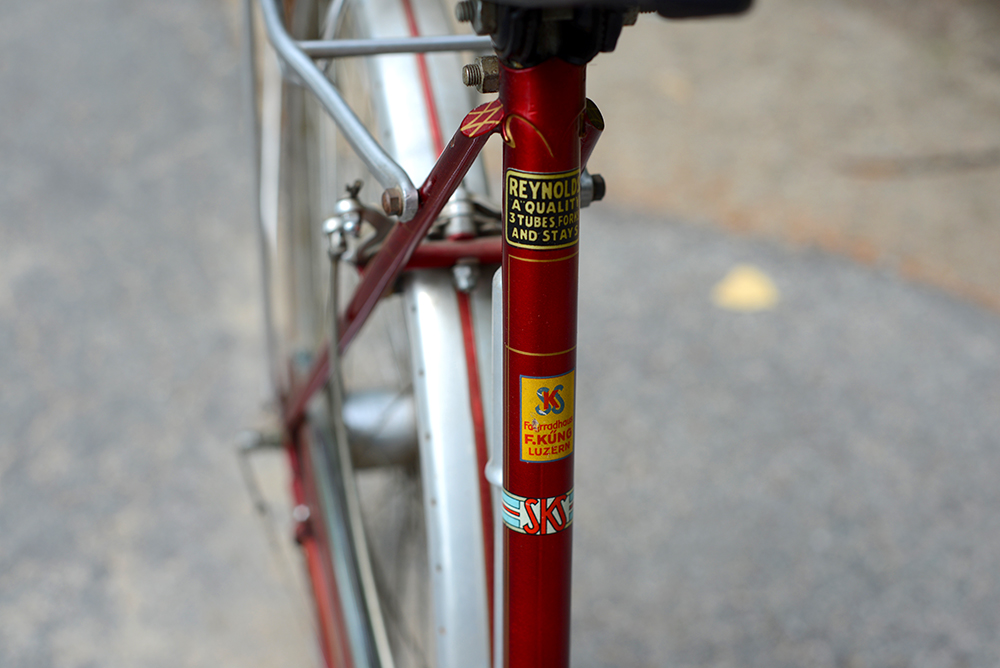 The only clue I could personally find was in a small seat tube decal:

I am deducing that Fahrradhaus (bicycle house) F. Küng was a bike shop, or importer, in Lucerne Switzerland, which must had been the Swiss rep for SKS components. This bicycle might have been made to celebrate either the start of this relationship or its anniversary. It could also have been given to F. Küng by SKS as a reward for excellence in sales performance. I am going to make the sexist, but historically probable, assumption that the owner of the Swiss enterprise was male, but that perhaps his wife or daughter loved beautiful bicycles and that knowing this SKS created this as a gift for her. 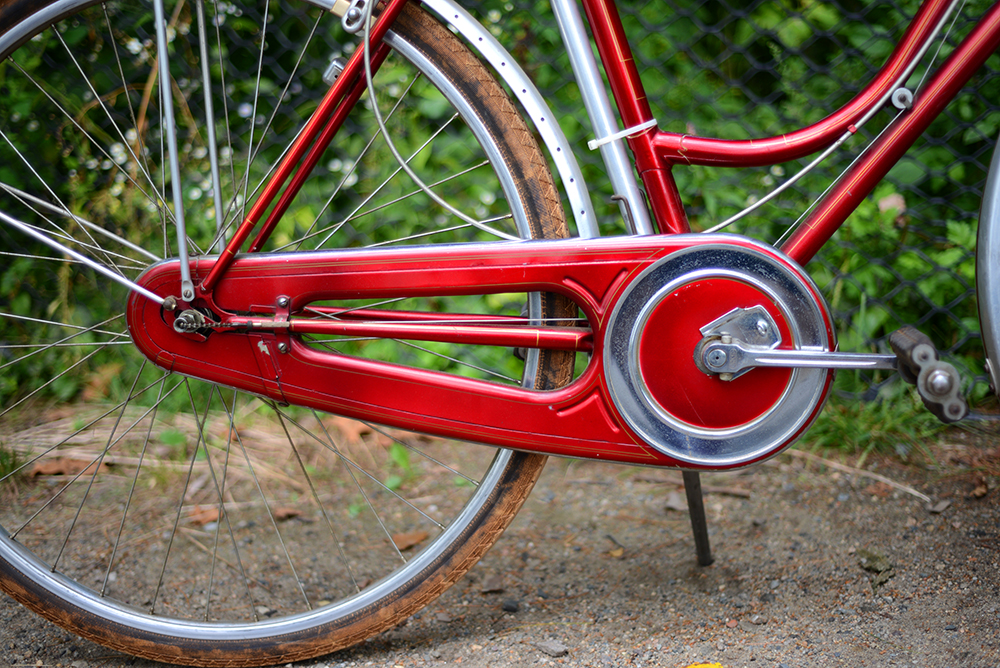 It's a plausible story I think. But unfortunately, the real story we simply do not know. There is no mention of SKS-branded bikes or of a Swiss "Fahrradhaus F. Küng" online. Neither is it clear how the bike made its way from Europe to Paramount Bicycle in Somerville, Massachusetts, from whence Nick eventually acquired it.

Based on the style of the hub (like all of the other components, it's undated, so precise production year is unknown) we can say the bicycle is of 1950's vintage. But that is pretty much it. 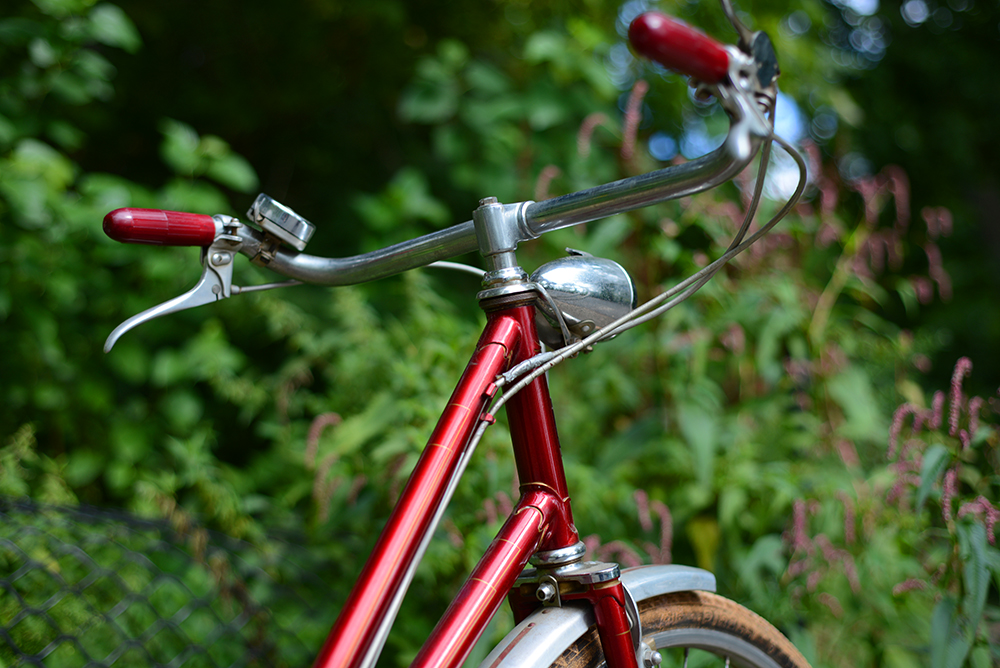 Why such excitement about a "mystery" that lacks significance, one might ask? After all, this bicycle has not won any races. It was likely not owned by a famous person. Its construction, while lovely, is not an example of anything that had been either novel or innovative in its time.

True enough. But for me it is about the lost dynamic of whatever had brought about this unusual "collabo." Clearly this bicycle had been an important gesture for whoever made it. There is such an optimistic and celebratory look to it, such an energy, I could almost feel the buzz that had gone into its creation through the fabric of time. I regret to think that whatever was being celebrated in the act of making it, has now been lost. 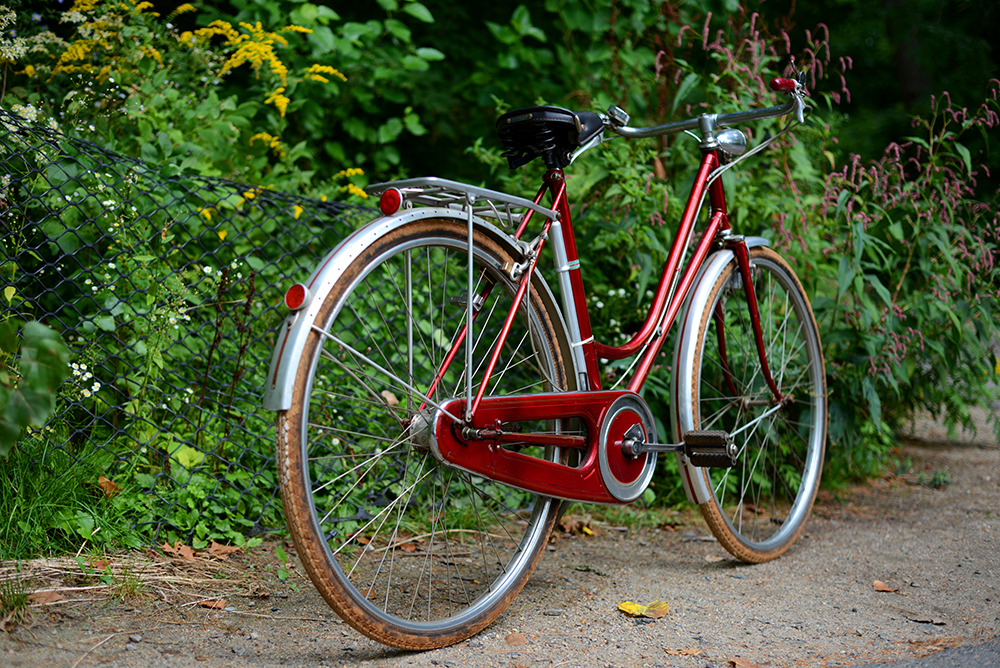 I have nearly forgotten to mention, that I've ridden the Swiss Miss. It was over a year ago now. We pedaled along the scenic, leafy cycle path around Fresh Pond and it handled beautifully. It is the kind of bicycle that passers-by point at, compliment, ask questions about - even if they aren't into bikes at all. And as we rolled along, I was reminded that this too has value. The value of making people curious, of making them fall in love with the idea of cycling even if they don't understand what exactly they are falling in love with. Whatever the notion, event or occasion that led to the making of the Swiss Miss, perhaps this was its true purpose.

If you are in the Boston area, the "Swiss Miss" is available to test ride at no cost (or to rent, for longer-term use) from the bicycle library at Curious Velo. With thanks to Nick once again for his endless supply of fascinating machines, the complete photo set can be viewed here.