Portrait of the Artist as a Cycling Man 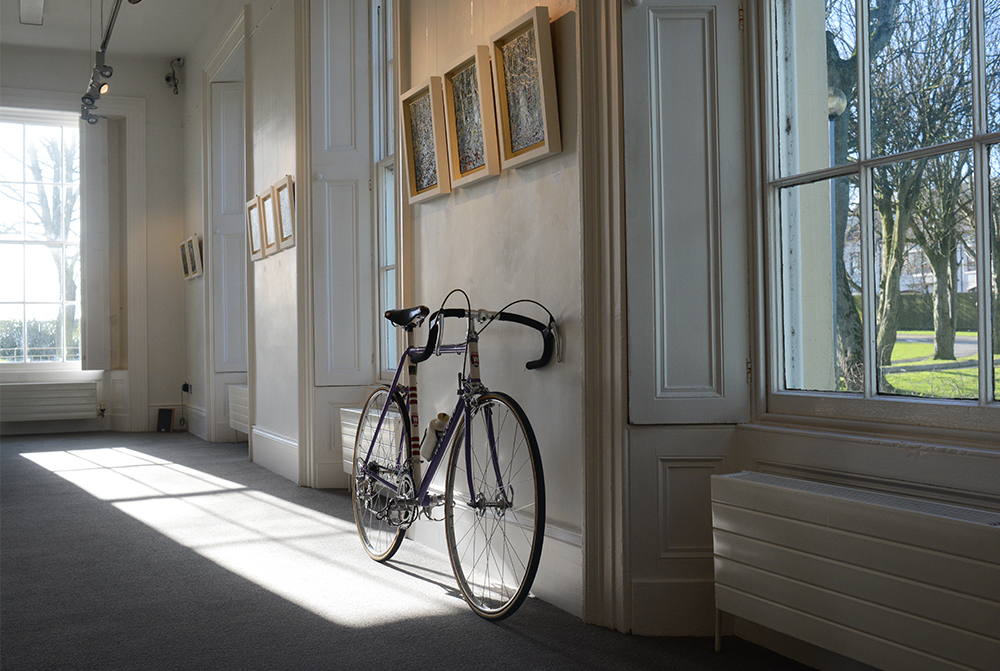 We had agreed in the event of rain to bring the bicycle indoors - a plan to which the staff of the white-walled, spotlessly-carpeted gallery had proved surprisingly amenable. However, that morning the weather was good - miraculously, amazingly good. And as I cycled to the Flowerfield Centre - along idyllic, tree-lined cycle paths with views of verdant hills and sparkling azure waters - I hardly knew it was a steady 4 mile climb from the train station.

It isn't often that I venture out to Portstewart these days. But on this occasion it was worth it. For having heard of Raymond Kennedy's show, I was intrigued. A painter and a cyclist. And his subjectmatter struck a cord. Now we would meet, and I would see his work as well as one of his bikes. With the gallery light so stunning, we brought the bicycle inside despite the sunny outdoors. And now we marveled as it stood in light and shadow, surrounded by rows of paintings. 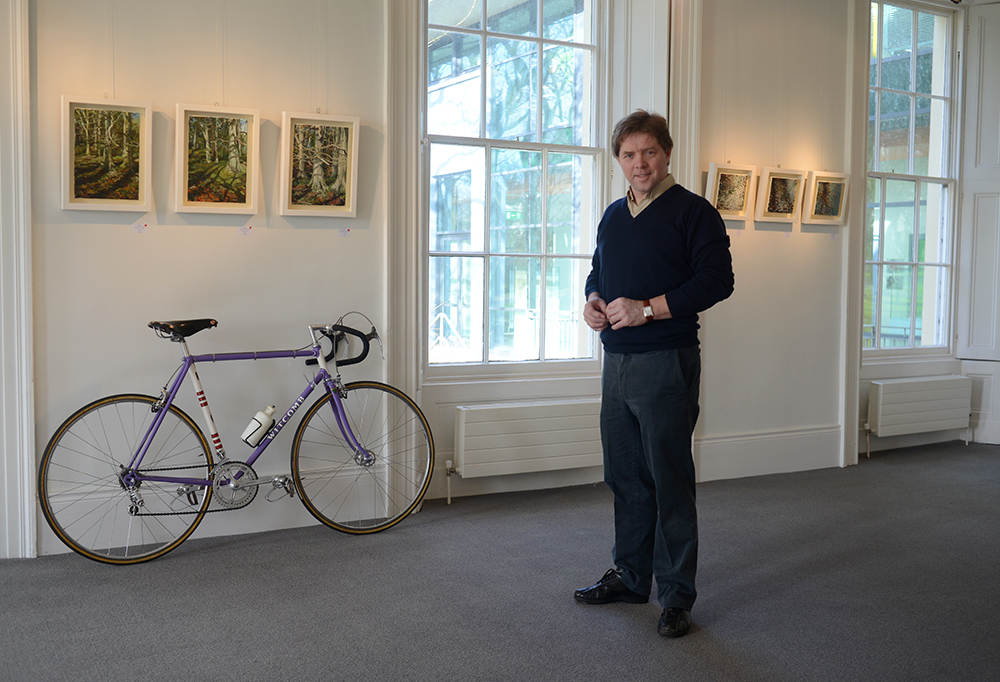 Perhaps it was the name - Raymond. And the magnitude of his painterly opus. But I had expected a somber, somewhat formal, perhaps even aloof individual. Instead the Coleraine man I met was boyish in appearance, easygoing in demeanor, and light on his feet - with an air of someone who spends lots of time outdoors and perhaps does carpentry in his spare time (which he does, as it turns out).

He had not ridden his bicycle much over this winter, Raymond explains, following a leg injury in November. Today was his first day back in the saddle and he looks forward to more. But the silver lining to having been stuck in the house all that time was the finished body of work that was now on display all around us. 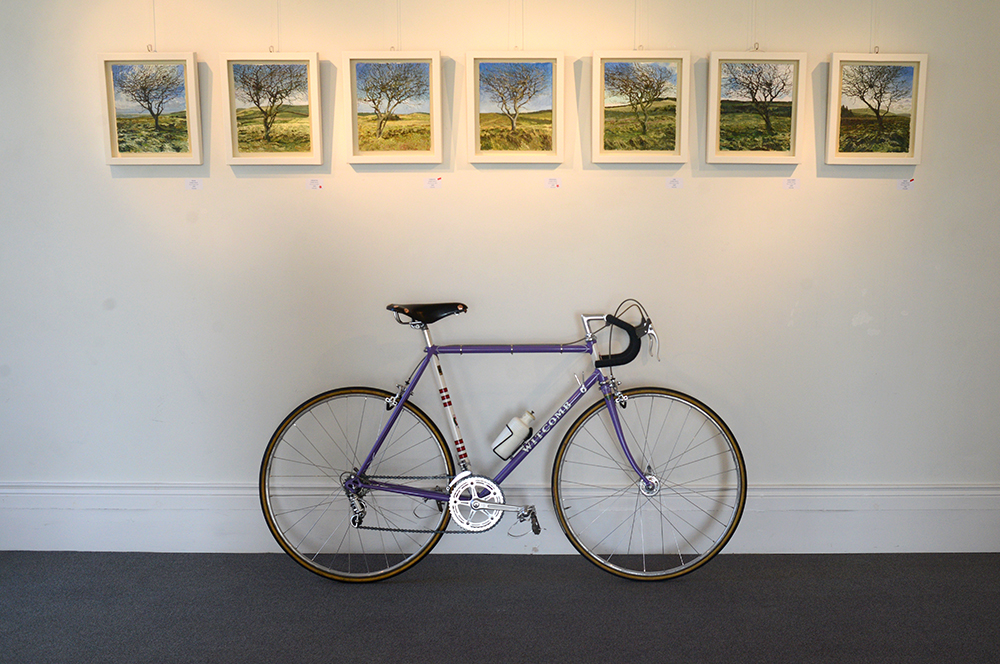 To say that Raymond Kennedy is a landscape painter may be technically true, and yet it is somehow inaccurate. Closer to the mark might be to say that he paints particular types of things within the landscape, and he paints them in a particular way. His approach is unique, yet lacking in the sort of gimmicky stylisation that is encouraged in the artworld these days as a means of setting one's work apart.

In the series above, the same tree is depicted from 7 different vantage points, resulting in a thought-provoking examination of viewpoint and familiarity. These works especially appeal to me, because the type of crooked, permanently wind-swept tree they depict has fascinated me since I moved here (see: Taming Trees), and I myself am forever photographing and sketching them from various angles. 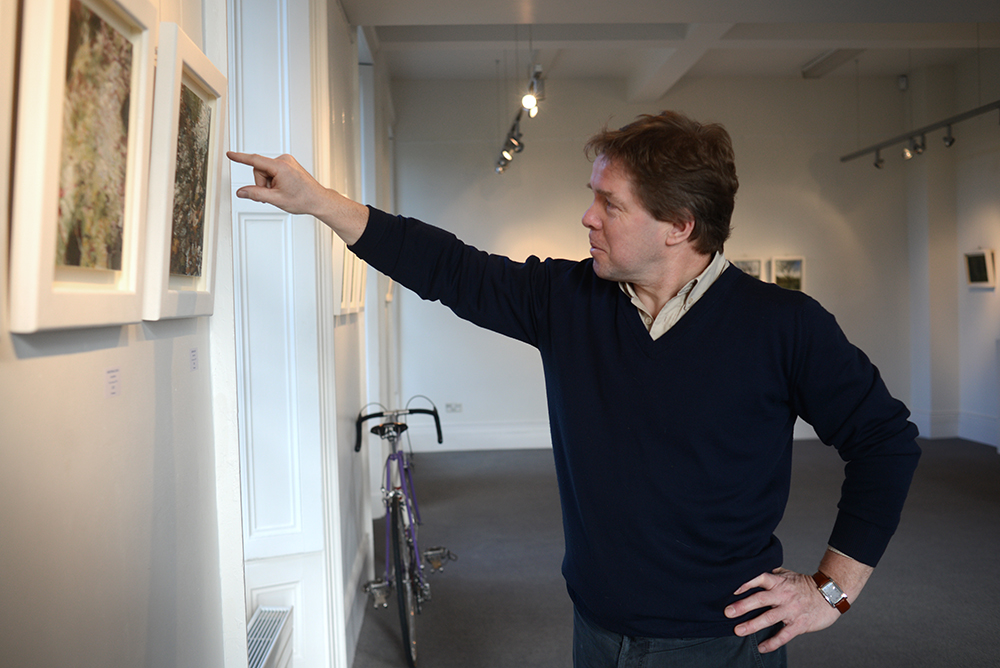 One thing I find compelling about Raymond's paintings is that, while they look nearly photo-realistic from a distance, up close they are a mess of improbable squiggles, textures, and colours which do not look like they could possible form a recognisable, let alone natural-looking image. 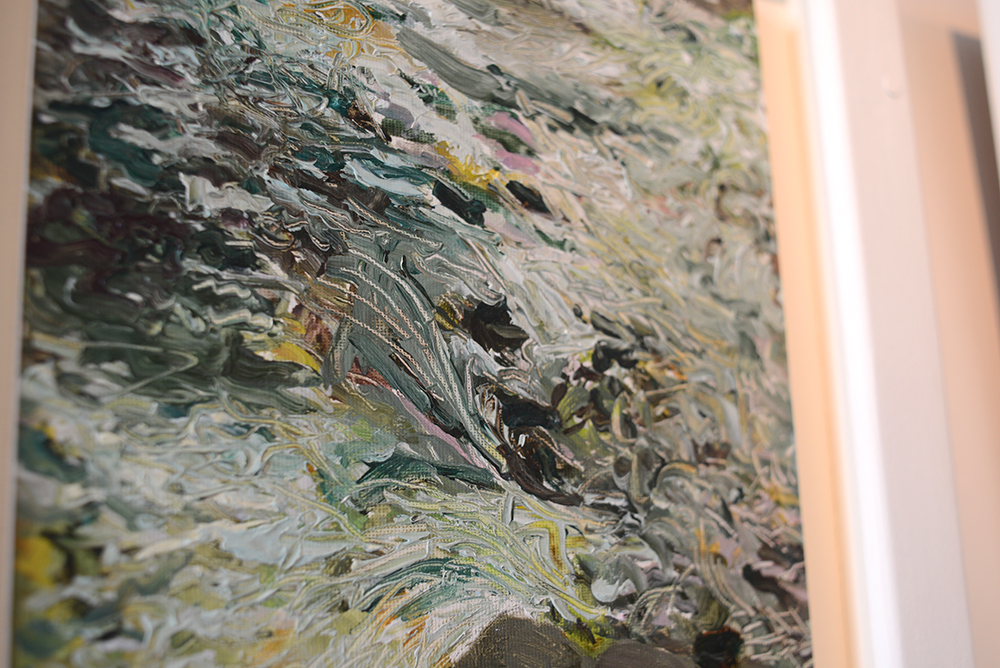 In a series of paintings depicting a tree-shaded river past which I have cycled many times, the water is laced with suspicious shades of lilac. It is a colour I myself remember observing when gazing into that water - then thinking I had imagined it. Where would such lilacs come from in a river that runs through a forest, all moss and sage and umber? 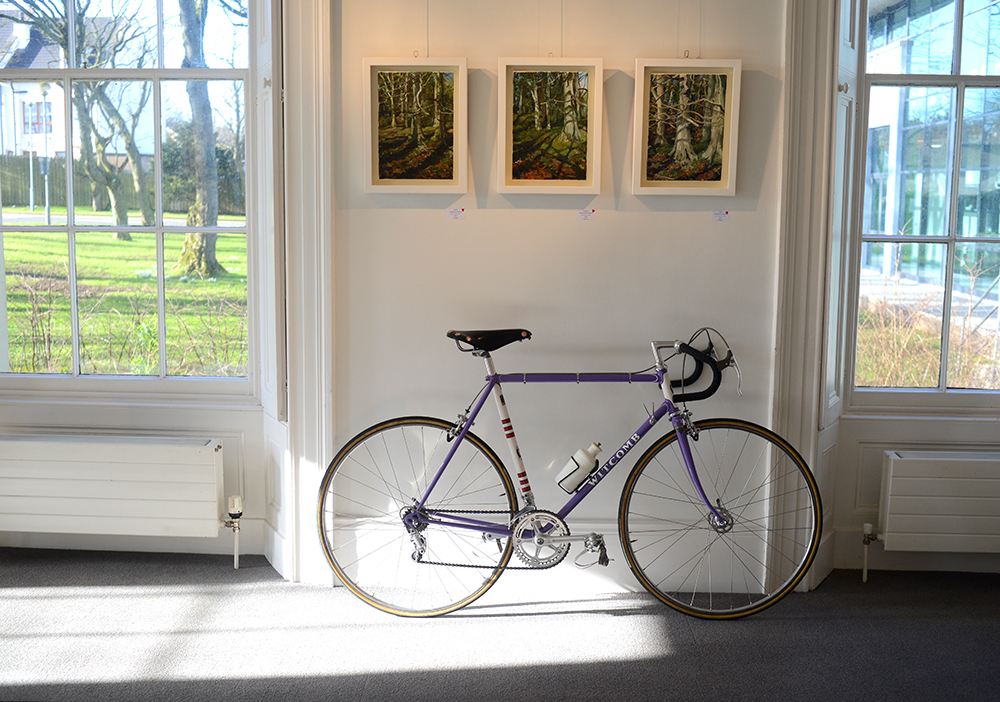 Perhaps the lilac question occupied Raymond as much as it did me, because the bicycle he had arrived on was of this same delicate shade. He had consulted me as to which of his bikes to bring, and when he started listing them I stopped him at the Witcomb. I had never seen one in person. Yet, I'd heard much about the brand and thought that it would be of interest to others. 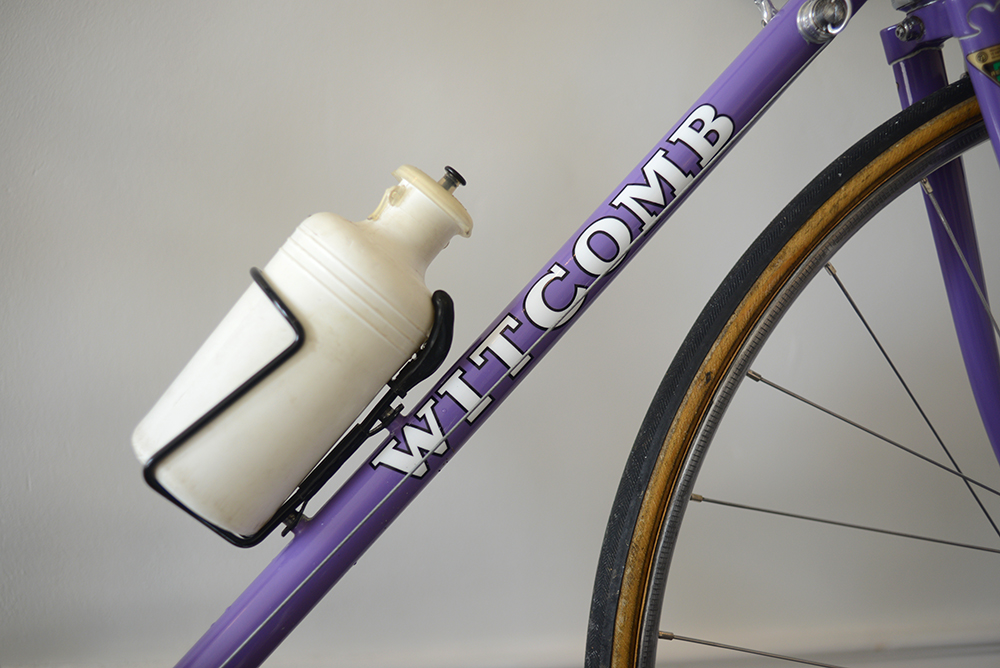 An English builder of production and bespoke bicycle frames, Witcomb Cycles was in business from 1949 till 2009 and thrived best in the era of British Lightweights. But the company is doubly interesting for its US framebuilding connection: Some of the best-known and most influential American builders got their start at Witcomb - namely, Richard Sachs, Peter Weigle, Chris Chance and Ben Serotta. Richard Sachs in particular writes about his time at Witcomb quite a lot. If you are interested in some detailed and entertaining personal accounts of the history of this connection I recommend browsing through his online diaries. 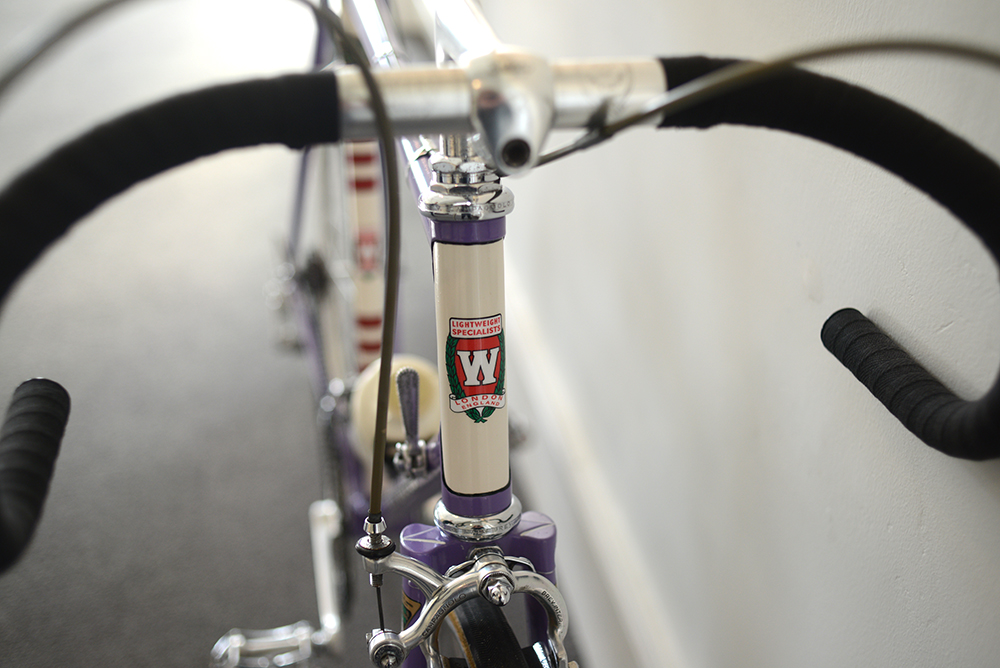 Raymond's Witcomb bicycle is of 1978 vintage. Having dreamed of a lovely lightweight for several years prior, he had finally saved up for one and was deciding between Witcomb and Mercian. Just then an article appeared about Witcomb in one of the cycling magazines of the time - it was one of those full spread deals, with stunning, evocative photographs. And thus, Raymond's mind was made up. At the time, Dave Kane Cycles had just opened in Belfast and they were a Witcomb dealer. He was able to pick up his completed Reynolds 531 frame there, then get it built up with worthy components. 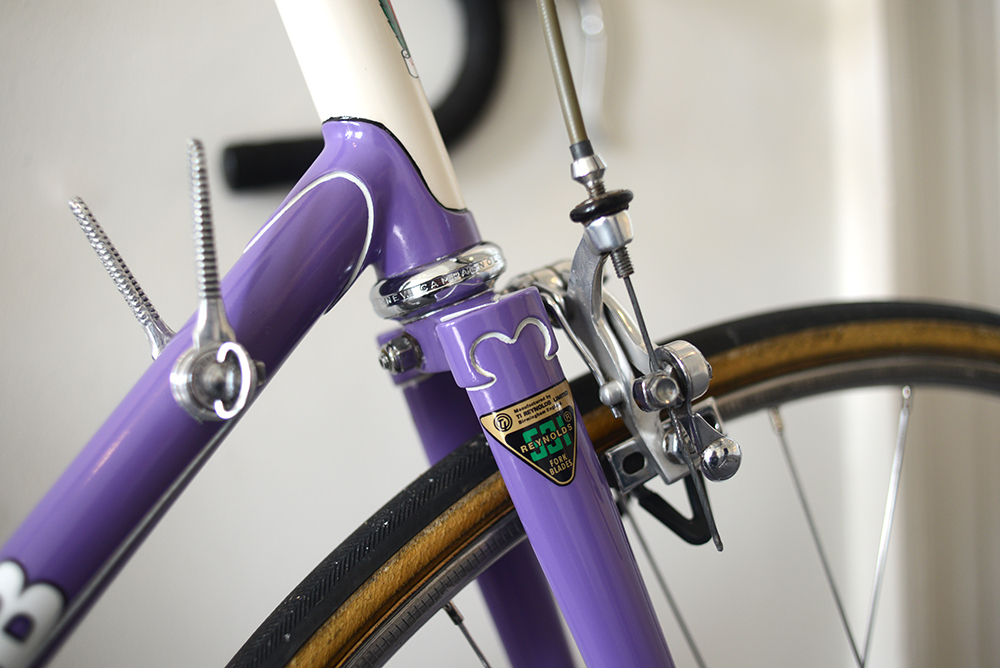 Originally, the bicycle had been white, with red accents. For a couple of seasons Raymond raced it. He then used it as a commuter, all-arounder, and tourer - including on a "very memorable 6 week trip" with a friend who later documented it for an Irish newspaper.  Touring through continental Europe in 1984, they cycled through "such glamorous locations as Flanders, SW Germany, Alps, Dolomites, Venice, Florence, the Cote D'Azure, Monaco, Provence and up as far as Macon in France."  For this trip, the Witcomb was set up with different gears and wheels, and with Carradice panniers.

Later still Raymond drifted away from cycling and let the Witcomb languish, neglected. But thankfully, this state of affairs did not last. When Raymond rediscovered cycling with a new vigor, the Witcomb was not only retrieved from storage but treated to a makeover. 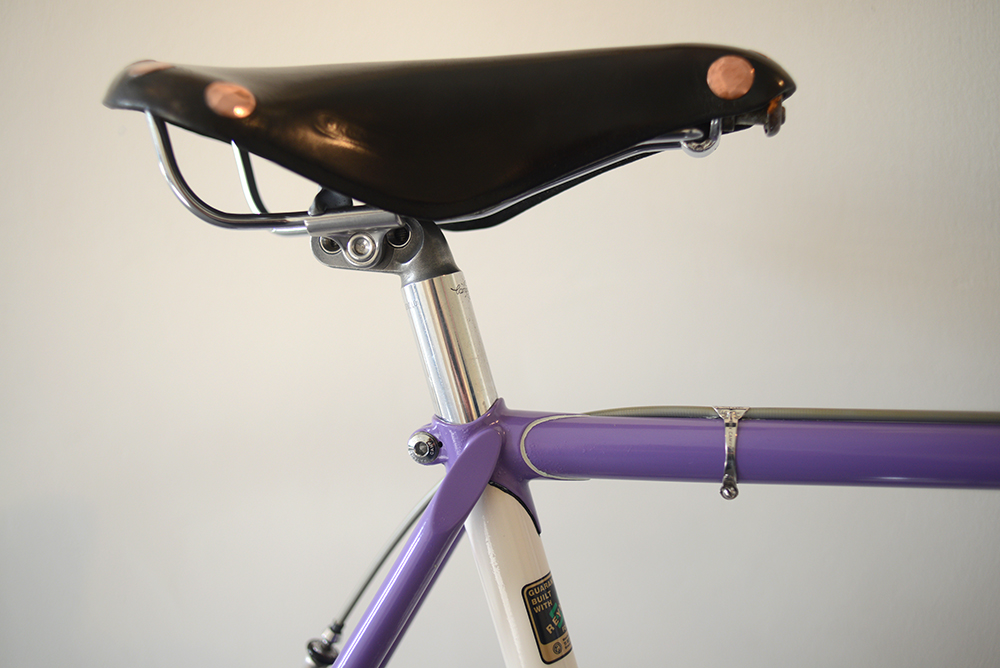 By that point the bicycle was in rough shape, cosmetically, and so Raymond decided to get it repainted from scratch. Being - well, a painter - he undertook this process himself, using "2-pack paints and lacquer, and an awful lot of patience." He chose the lilac colour as a nod to the 1970s Witcomb racing team colour scheme (you can see what the original looked like here, and even buy this 57cm beauty from yr'man in Boston!), though chose a shade that was not exactly the same.

Personally, I think this bicycle looks so well in lilac and cream, I cannot imagine it in any other colour scheme. Beautiful job, and I regretted not having arrived on my own lilac Mercian to compare. 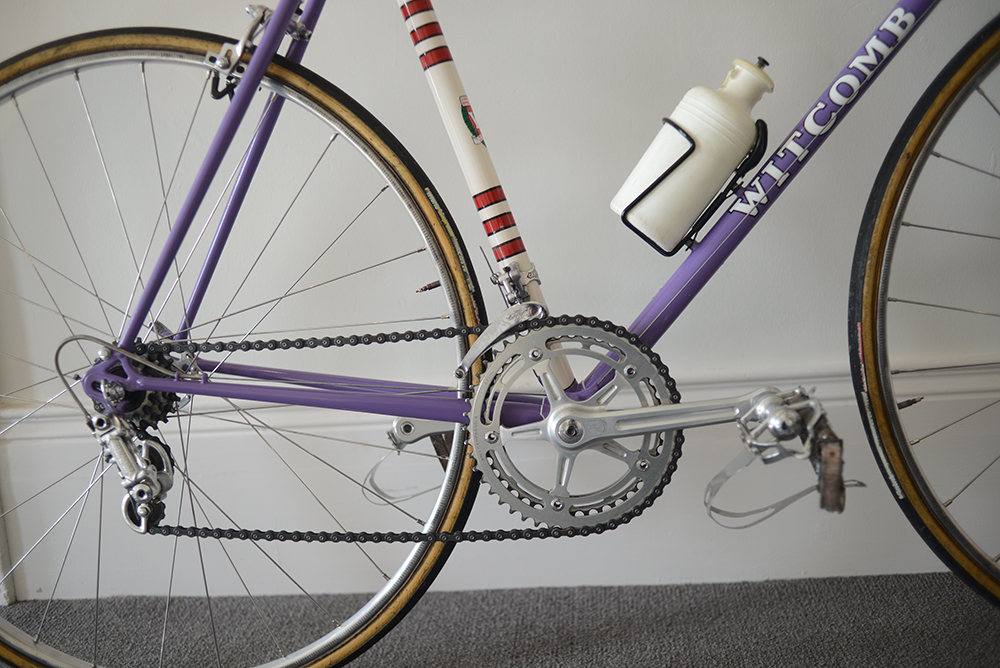 The parts on Raymond's bike are originals, including the wheels he'd built himself. Painstakingly cleaned and polished, they components include: 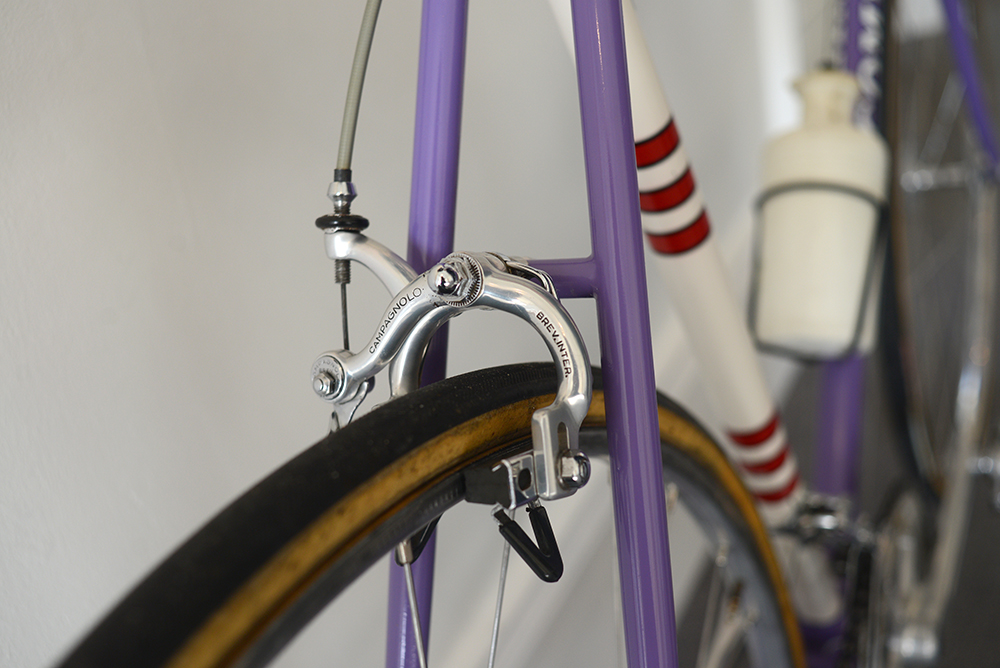 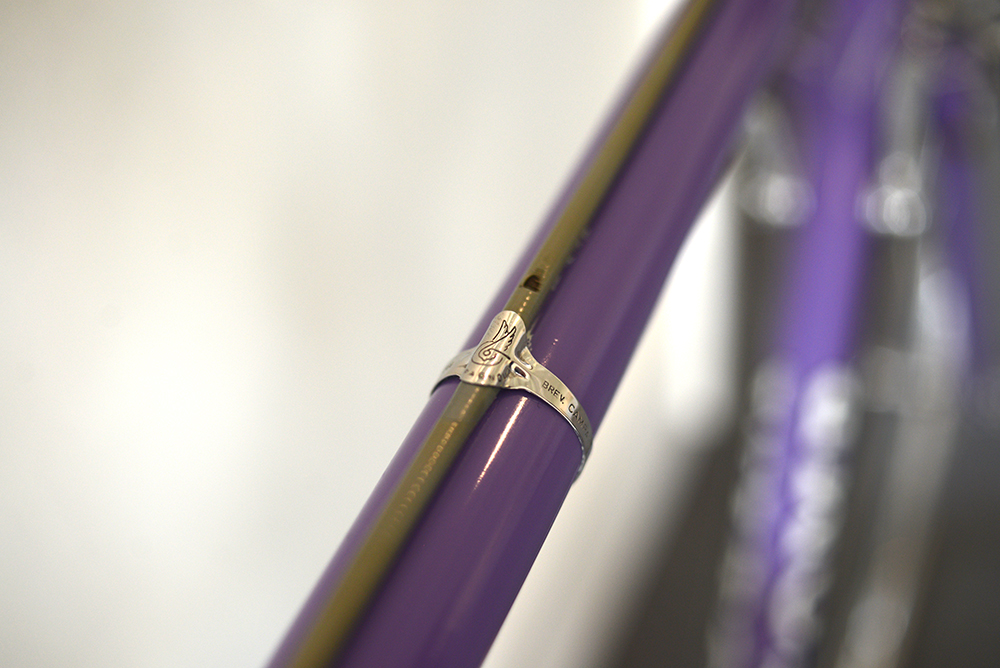 The pedals and cable clips are original Campagnolo as well. 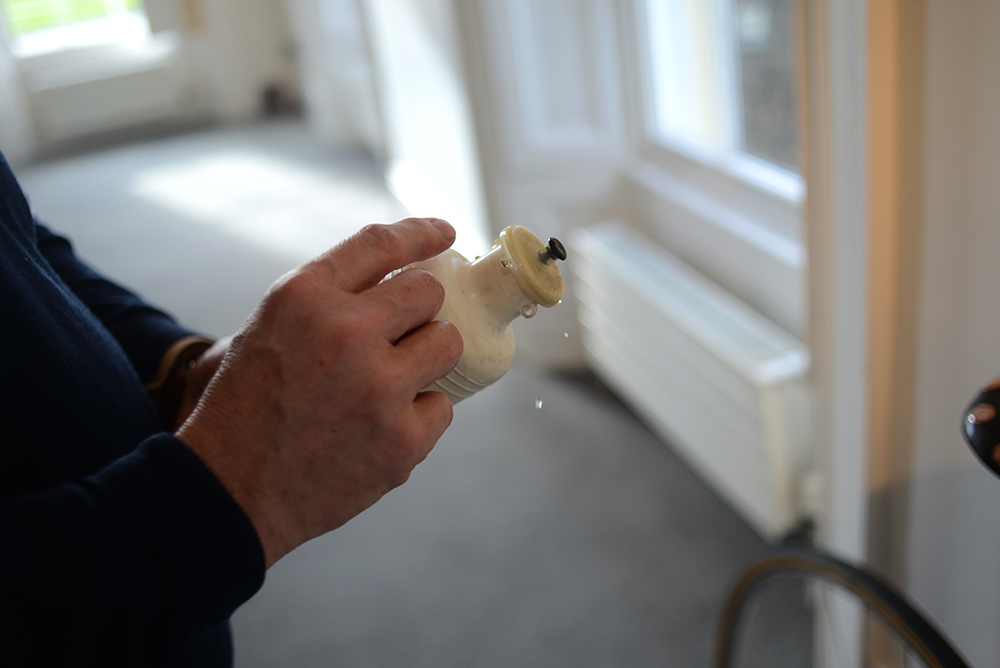 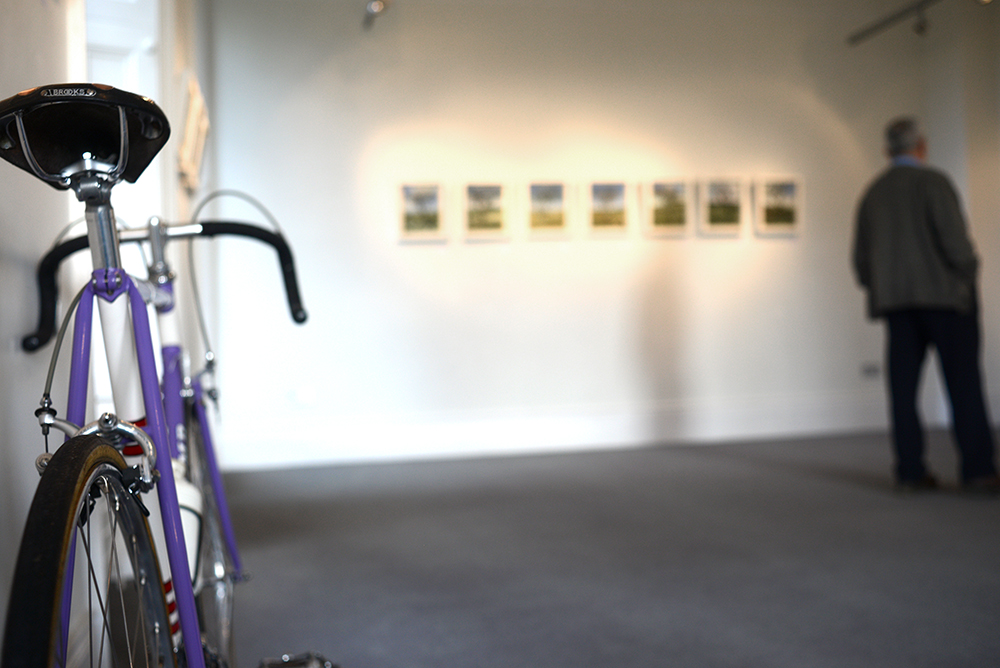 Raymond's life is different now than it was when the Witcomb had been first in use. He is married now and often cycles together with his wife (on individual bikes, as well as on tandem). And for the first time in his life has recently been able to work as a painter full-time, the exhibition we were now viewing a testament to how beneficial that has been for him. Most of the paintings on display are marked as sold, and I am tremendously pleased on his behalf. 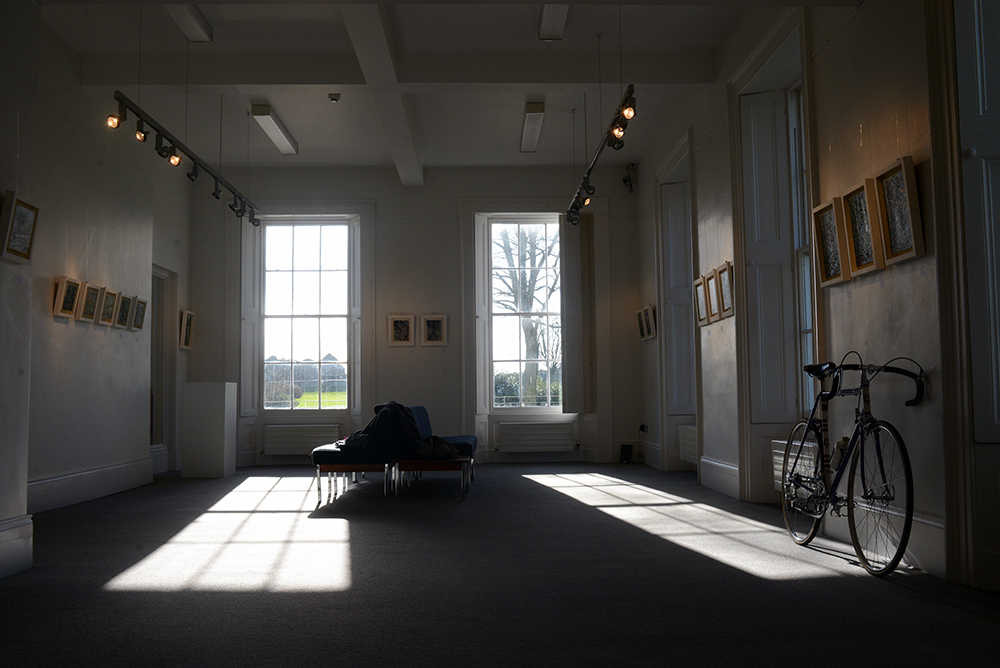 Discussing his work and his bikes, at length we left the hushed space of the gallery and coasted downhill as Raymond accompanied me to the train station. "My wife likes old French bikes," he mentions in passing. In turn, I reveal that "I know a guy," then proceed to corrupt him with information on where to acquire said type of bicycle for a bargain. And with this, I know that I will see Raymond again, if only to catch a glimpse of his paintings, and his other bicycles... including, some day - why not! - that gorgeous 1940s Frech mixte he will have restored for his wife, a work of art of another kind.