Gravel, Dirt, or Pavement... the Song Remains the Same 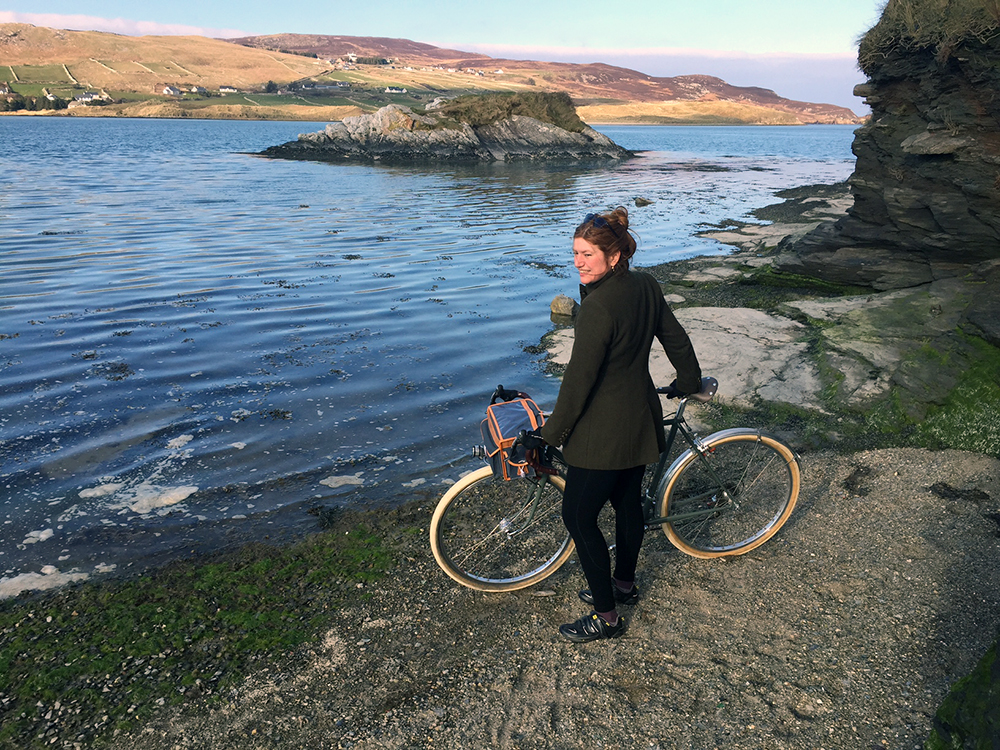 On reading Jan Heine's useful recent post about bicycles for gravel riding, I was reminded once again that the industry still lacks a standard, shorthand term for the sort of bicycles he describes. For while gravel riding is part of what such a bicycle is suited for, so is dirt. And mud. And sand. And, for what it's worth, smooth pavement! For this reason some describe such machines as "mixed terrain roadbikes." Or "all roads" bikes. Yet somehow even these more inclusive labels are not quite right - or, rather, not quite sufficient, to communicate the full extent of what these machines are all about. For, in addition to handling paved and unpaved terrain, they are also performance-oriented: Designed with speed and agility in mind,  they "offer a spirited ride and encourage you to go faster and further" [Heine]. So for instance, a touring bike, mountain bike, or transport bike with all-terrain capacity, would not fall into this particular category. On the other hand, a cyclocross bike would. As would a traditional randonneur. Or a standard road-racing frame fitted with wider tyres.

Communicating this concept in one snappy phrase has proved challenging for lovers of such machines - myself included. Nevertheless, as I ride my own bike of this un-named type, I realise just how crucial of a role the whole concept has played in my own cycling experience over the years.

In the late 2000's, both the Rivendell and the Bicycle Quarterly folks introduced (their own takes on) the idea of the 650B fat tyre roadbike. And in 2009, as a fledgeling cyclist who had only recently mastered riding an upright city bike without veering into traffic, I was immediately attracted.

At the time, all the chatter about tubing and geometry was pure gibberish to me. What attracted me was how accessible and friendly such a bicycle seemed. I wanted to try road cycling and dreamt of flying along country roads on a speedy bike with drop bars. But the roadbikes then-available in shops, with their racing-oriented fit and razor-thin tyres felt impossibly scary. The fat tyres, I thought, would help me with balance, enabling me to master the drop bar position. I also liked the idea of fenders, light luggage, and dynamo lighting that went hand in hand with such bicycles. And so when Rivendell introduced its reasonably priced Sam Hillborne model, I snapped one up - in the beautiful metallic pea-green colour. 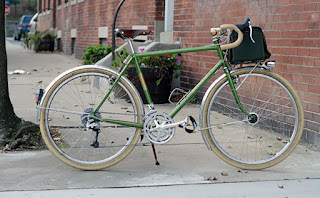 The 2-year saga of my Sam Hillborne ownership played out on this blog in a way that, in hindsight, I feel had been rather indelicate on my part - reflecting my then-lack of experience in writing for an online audience. What I will say about it now, though, is that this bicycle played an invaluable role in my development as a cyclist. At the time I got it, my balance problems were so severe that without the Sam Hillborne, I don't believe I would have learned how to ride with drop bars. This bicycle felt so stable, safe, predictable, and cushy, that with each ride my confidence grew exponentially. I started out riding it on paved roads, then gradually began to venture out on packed dirt, and finally gravel and even sand - which I had previously been terrified of.  As my cycling skills developed with the Sam's help (I even rode this bike on my first paceline ride with the local racing club!), it also helped me learn about my preferences - from the fit and position I felt most comfortable with, to which components and accessories I actually needed for my use case scenario, and which I did not.

In the course of owning and constantly riding this bicycle, I made some unexpected discoveries: For example, that I liked modern drivetrain components, that I disliked loaded touring, and, finally, that the more I cycled the more I came to prefer a fairly aggressive position, feeling compelled to set my handlebars lower and lower, until finally they "wouldn't go any lower" considering the frame size. It was this that led to my decision to sell the Rivendell. It was an excellent bicycle for the purpose it had been designed for. But with its 57cm virtual top tube, the frame was simply too big for the fit I had ultimately settled on (I now ride 53cm frames). And its relaxed, load-optimised geometry and tubing were wasted on me, since I seldom loaded it with anything heavier than a change of clothes, a camera, a snack, and a book. 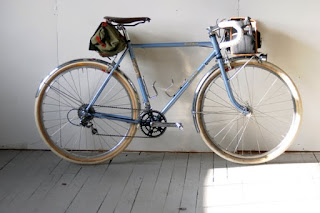 In deciding what bike to get next for all-terrain riding, I tried a few cyclocross machines. But what I actually wanted was very similar to the Rivendell Sam Hillborne: a bike built around wide 650B tyres and equipped with fenders, dynamo lighting and a handlebar bag - only with a smaller, lighterweight frame.

At this time I was still living in Boston and was friendly with Mike Flanigan of ANT, who had just started offering framebuilding classes. A fan of the fat tyre roadbike concept, Mike encouraged me to replace my Rivendell with a bike I would build myself. And that was exactly what I decided to do. However, as I had an inkling that this process might, from start to finish, take a bit longer than planned, in the interim I replaced the Rivendell with the Rawland Nordavinden - an exciting new model with lightweight tubing and low-trail geometry that had just come out at that time.

When I started riding the Nordavinden, I felt it was really everything that I had wanted - except still a bit too big for me (they did not offer sizes any smaller). In fact I liked that bike so much, that I basically built my own frame to be its replica - only half a size smaller and with a few modifications, such as a slightly lower bottom bracket and shorter chainstays. To the extent of my ability, I also tried a few tricks to reduce the overall weight of the frameset, such as thinning out the dropouts and lugs. 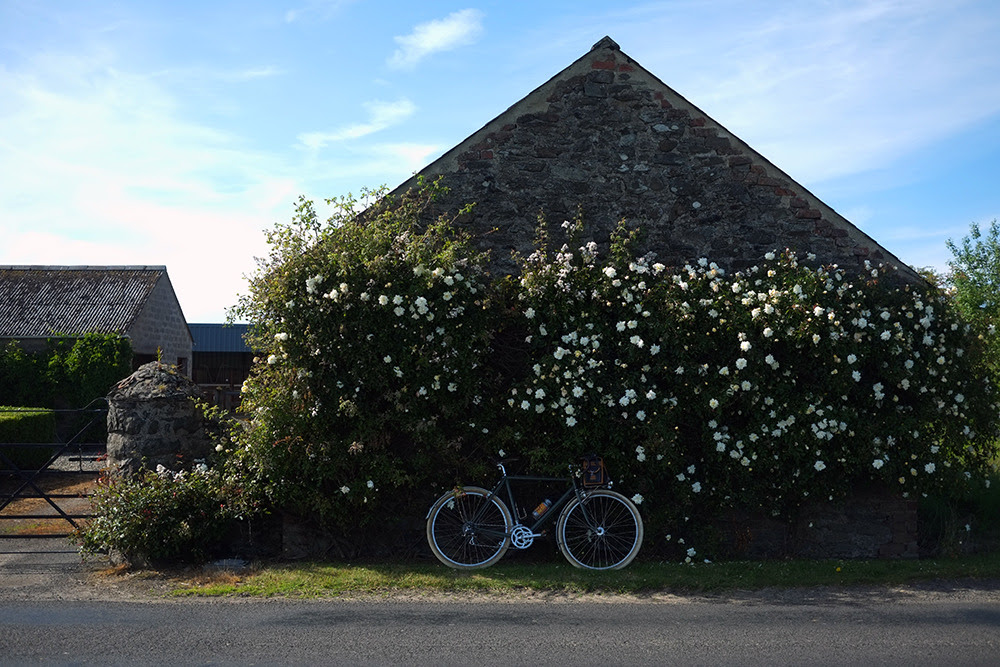 As I had predicted, it was quite some time before the frame I built under Mike Flanigan's instruction was actually fitted with components and ride-ready - two years to be exact! What a relief that, in the course of that time, my riding position and other  preferences had not changed much. In addition to the all-terrain Rawland, I now owned an "ordinary" skinny-tyre roadbike for cycling on pavement. My ideal would be, for the fat tyre bike to be just as fast, nimble and lightweight, accounting for its extra accoutrements. The Rawland had come close to that ideal, and I was hoping that my DIY bike might come closer still.

And that it did. It was rewarding to discover that whatever subtle tweaks I'd made in sizing and geometry translated into (equally subtle, but nonetheless noticeable) improvements in performance and comfort. I brought the DIY bicycle ("Alice") with me to Ireland and it is now my second year of riding it here.

And I'll be honest: Even with my "optimised" design and best attempts at lightweightness - I cannot eek out quite the same performance out of this bike as I can out of my skinny-tyre roadbike with titanium frame, carbon fork and racing wheels. Were it my intent to take part in competitive unpaved rides, I might opt for a pared-down machine made with more contemporary materials. Happily, I have no such plans at the moment and use this bicycle for what I would describe as "spirited sight-seeing": Long-ish distance rides over paved and unpaved terrain, with my camera in tow. And for that purpose it is pretty much perfect - transporting me, and my camera equipment, wherever we might wish to go speedily and comfortably.

I have been riding a gravel bike, all-roads bike, mixed terrain roadbike, or whatever we might want to call it, for exactly 6 years now. And while the machine has changed twice, in a sense it really hasn't. When I ride the bike whose frame I built with my own hands to my own spec, I still see and feel the "ghost" of the Rivendell Sam Hillborne, and the tremendous influence it had on my development as a cyclist. It is a kindly ghost, neighing and smiling in the knowledge that I've found my own path.