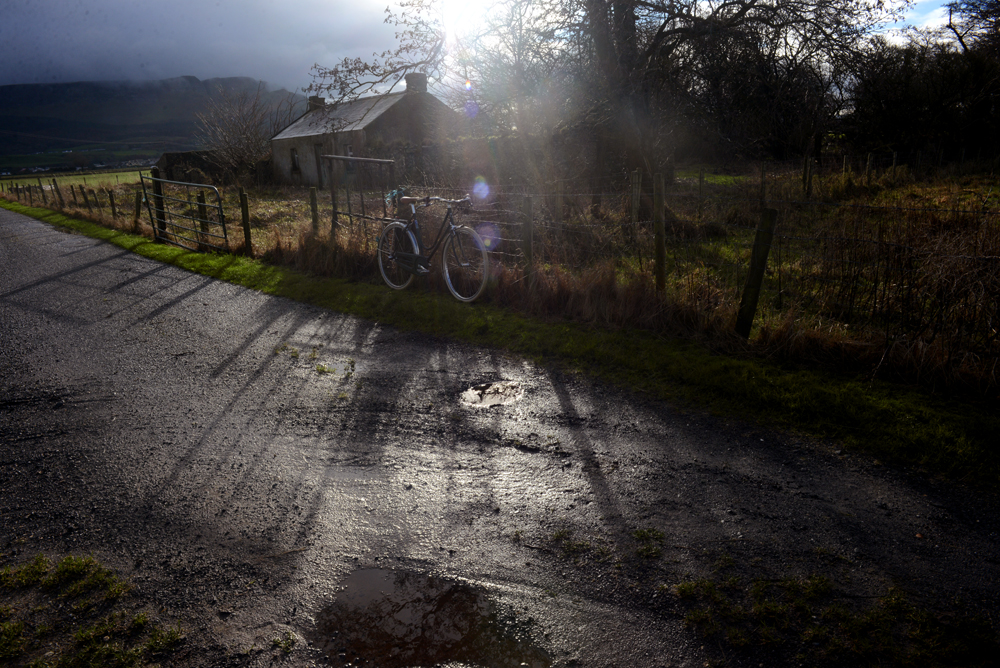 That morning we woke to a most unnatural circumstance. So strange and utterly different it was to the state of affairs we had known previously, that at first our senses could not work out what exactly was happening. As we walked through the house, every room was filled with the same eerie sensation. And when we stepped outdoors it persisted.

Not one to give into panic before breakfast, I gathered my powers of concentration and tried to determine, first and foremost, which of the five senses this thing which was happening around us fell under the auspices of. Was it a new quality to the light that disturbed me? Or perhaps a strange smell in the air? I decided at length it was most similar to a sound. It was then the situation revealed itself finally: It wasn't so much sound we were perceiving, as the lack of it.

Absent was the low, loud hum of wind against windowpanes and its high-pitched whistle through wire fencing. Lacking was the knock and crackle of tree branches against the roof. Utterly gone was the rattling of metal drums dragged and flung against the concrete surface of the farmyard, the hysterical mooing of cows, the hissing of grass in the fields as its blades collectively swelled and fell like sea waves. At the start, these sounds - mixed and mashed into a mad howling song - had alarmed us. But over the week of continuous storm weather they had become a normal soundtrack to our lives, morphing into a familiar and not unpleasant background noise - so much so that the sudden and total removal of it now came as a shock to the system. Our environment was completely, disconcertingly empty of auditory input. And that emptiness, in its novelty, was itself a sort of heavy presence.

Mesmerised by its spell, it took us a good hour to grasp the practical implications of this situation. We could go out on our bicycles without fear of being lifted from the ground and deposited into a field in a neighbouring county!

No further encouragement was needed. Down went the coffee. On went the jackets, the gloves and hats. We grabbed a pair of flat-pedaled bikes and set off.

The trip down the lane was idyllic. In comparison to the previous days' weather, the 20mph headwind felt downright mild and playful, slapping our faces in jest and pushing the bikes about half-heartedly, while still allowing us to make forward progress. And the sun - while not, in the strictest sense of the word, out - was making its presence known by illuminating the gray thicket of cloud from within in irregular, flickering bursts. The puddles beneath our wheels reflected the swaying trees, the dilapidated homesteads, and the changes of light with remarkable clarity, and in it all there was a cheerful, fresh morning energy of the sort you can only get after a bad storm.

Turning onto the main road we continued to pedal, observing fields strewn with wind-blown debris, snapped tree trunks and crumbled stone walls. Grateful for the chance to finally get out and cycle in each other's company, we were full of positive feeling and hardiness. When the sky began to spit moisture, we ignored it entirely. When the spitting turned into weeping and the wind picked up, we pulled up the hoods of our jackets and kept going, rejoicing at our resilience against the elements. Only when the waterworks were such that our view of the road ahead grew obscured, did we finally relent and give each other a look acknowledging it. "Shall we keep going or turn?"

Some quarter of a mile ahead was a forest entrance. We decided to pull into it and ponder this question under the shelter of evergreen canopies. Leading the way, I cycled across the empty lot toward the nearest cluster of trees. And just as I came to a stop, the ground jolted beneath me and my ears rang with the sound of a terrific explosion.

It was a bang so deafening and powerful, that for a moment I froze in place as if the pause button had been pressed in a film. I then dropped my bike and ran back toward my companion, while recalling, with a sick feeling, the stories of WWII-era mines still buried in fields and forests exactly like this one.

Of course the sound was not that of an exploding mine, but of a burst bicycle tyre. And my companion was fine. But the devastation to his machine was remarkable. The rear tyre was in shreds. The wheel rim was bent. The mudguard had blown clean off its bracket and stays, and buckled in half, at an almost perfect 90° angle, from the force of the blow-back. Wiping the streaming rainwater from my face, I could discern that bits of mudguard were missing - jagged holes in the alloy where it was once connected to the installation hardware. A good thing I was not cycling behind him, I thought. And made a mental note to always wear eye protection.

As the wind began to howl and the rain to pour in one continuous frigid stream, we leaned against the pleasantly spongy pine trunks and contemplated our predicament. This contemplation did not prove time consuming, as there was really only one solution. I would cycle home, then return in the car to scoop up the mangled velo-victim and its shivering rider.

Excited by the prospect of my first rescue mission, I rode in the lashing rain and gusting wind with surprising deftness, using the cuff of my left sleeve as a perpetual windscreen wiper for my glasses, and pushing the pedals with all my might whilst counter-steering jauntily to achieve an overall forward direction in spite of erratic wind patterns. I arrived breaking no speed records, but also, thankfully, no parts of bicycle or body. And then, with surprising calmness, I got into the enclosed motorised contraption whose manual transmission I had only recently been deemed as competent enough to handle unsupervised, and propelled it, successfully, toward the woodsy spot of the explosive incident.

Much of the rest of that day was spent by the fire, the sky outside black and the whine of the wind competing with the volume of our voices, as we revived the morning's events with colourful retellings and speculated on the cause of the treacherous tyre failure.

The following day I awoke again to an eerie calm with hints of jagged sunlight. But I remained suspicious and kept my travel radius small, braving only a trip to the shop and back. And so this time, when once again the storm returned to sweep away both bike and human, I sheltered in an abandoned cottage and listened to the sounds of hailstones pelting its roof. When the storm took a breather, I high-tailed it the rest of the way home, the thunder roaring rabidly behind me all the way.