Restoring to What Never Was 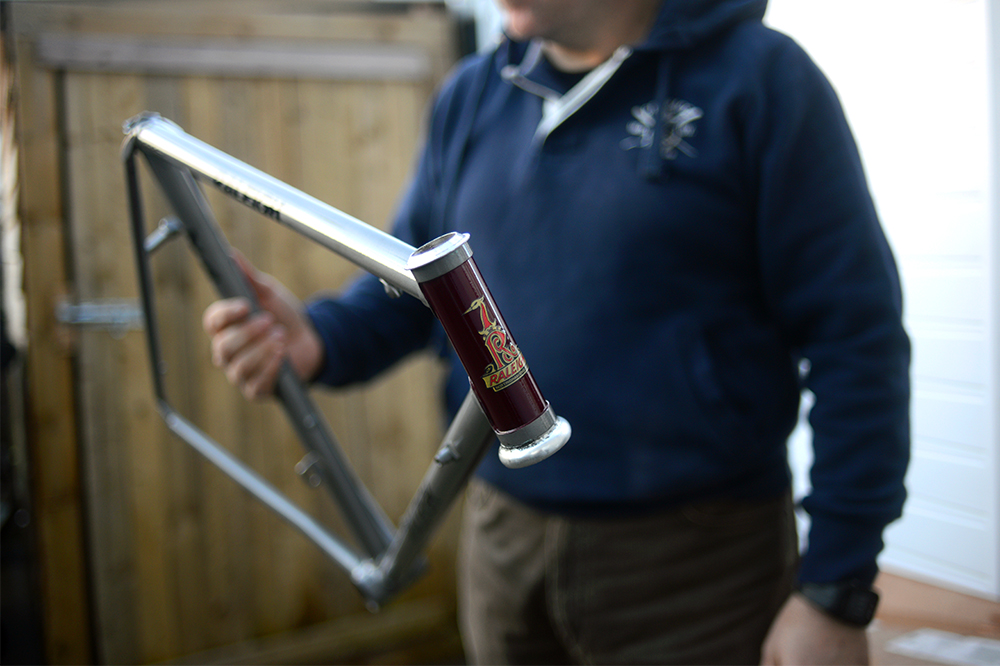 It seems that whether I live in the densest of towns or in the remotest parts of the countryside, I am fortunate to have neighbours who are bicycle-mad. So much so that, wandering past their houses of an evening, I might spot them in the act of polishing a set of wheels, or perhaps restoring a frame in their shed.

"When did you get that one?" I asked Owen, peering over his fence. He was holding up a vintage Raleigh frameset, waving to me with it as I made my way through the field behind his garden.

"Don't you recognise it?"

I did not recognise it in fact.

The frame was silver with a sort of dark maroon headtube. A model I had seen, no doubt, before, just not in Owen's collection. My gaze traveled along the tubes for clues to something out of the ordinary, but I could spot nothing - until my eye was drawn to the seat cluster. Those seat stay endcaps, they reminded me of something...

And then all at once it hit me what this bicycle was. 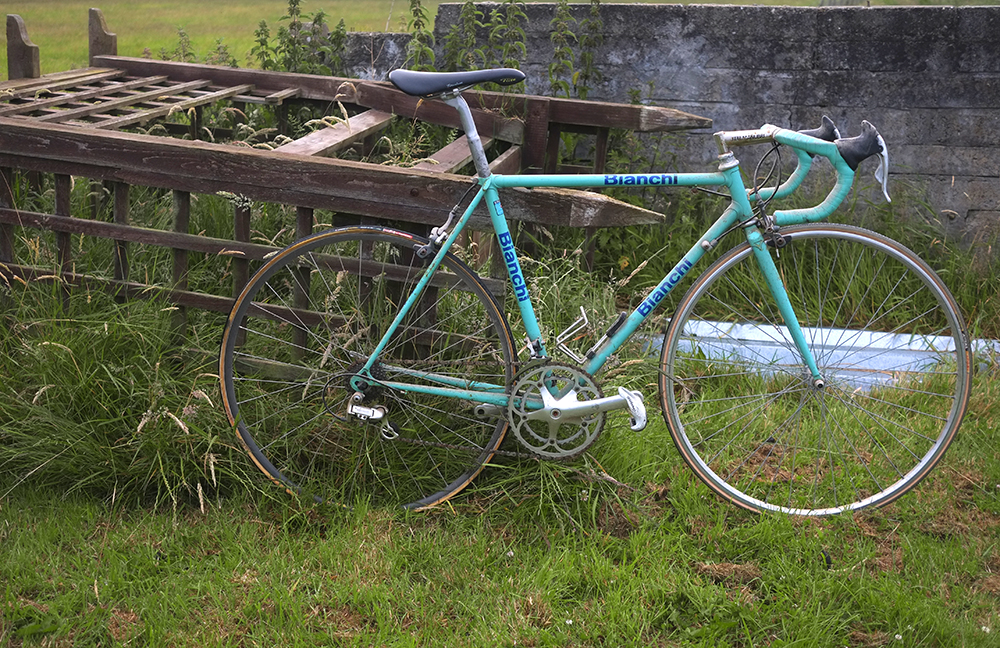 Over the summer I wrote about a rather unusual bicycle (here) that had made its way into Owen's stable. At first glance an iconic celeste Bianchi, it was actually a Team Raleigh 753 in disguise. To recap the history of this bike, it was initially owned by a local cyclist who had raced for the Belgian team Maestro in the '90s, which was sponsored by Bianchi and required its riders to ride Bianchi-branded bikes (apparently what lay beneath the paint did not matter, as long at the bike appeared thus branded!).

Having acquired this local legend of a machine, Owen decided to re-build it with newer components. And, while he was at it, to de-Bianchify it. Why? Because the falseness of it felt wrong I suppose. The bike even "looked wrong" to the eye somehow, its proportions and details un-Italian even if the decals said otherwise.

Interestingly, Owen decided not to chase whatever look the machine originally had as a Raleigh Team 753, but to go with his own colourscheme. After stripping and sandblasting the frame, he treated it with a rust-proofing agent and then simply clear-lacquered. And indeed on closer inspection I saw that the tubes were "raw" rather than silver. The headtube he painted maroon for a pop of colour, then sourced the relevant decals, and hand-lacquered clear again over the entire frame - employing a technique not dissimilar to the one he uses when repainting vintage aircraft.

As darkness fell upon the small back garden strewn with tools and components, I decided to postpone a photoshoot until the frameset was fully finished and the bicycle assembled. And I could not help but feel a tinge of regret that the "Ralianchi" was no more. Granted it had been an "incorrect" bicycle. But it had also served as evidence of the much-mythologised practice of re-branding bicycles for promotional purposes in racing. This, I thought had made it a historically interesting specimen.

The repainted frame looked friendlier, less aggressive, more homey. It was not so much a restoration as yet another re-invention of a frame that had already lived two lives and had many adventures.

Meanwhile, no sooner was the celestial glow scrubbed off the Ralianchi, another creature, similarly hued, appeared in our 'hood.

A Bianchi? Nope. It's a Raleigh. And not a repainted one either, but an all-original 1980s Raleigh Rapide Handbuilt, with Reynolds 531 tubing and rather attractive art-deco style lugwork. But that is a story for another time.