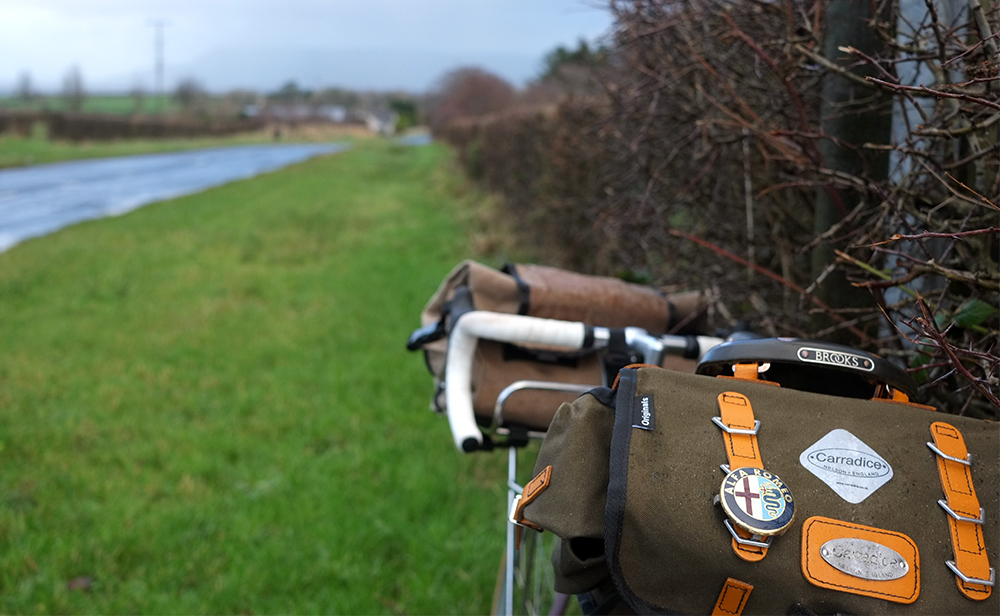 "No! Wait till you approach the markings... Okay, now! Brake. Clutch. Second gear. Look right. Is it clear? Keep going."

As we proceeded through the roundabout on our bicycles, mine possessing no gears what so ever, the humour of the situation was not lost on me.

I had wanted a lesson in slowing. In the car, which I’d only driven on the open road a total of 3 times at that point, under heavy supervision, I was downshifting far too early, anxious that if I left it late I'd “forget” how to operate the manual transmission under pressure, plow straight through an intersection. Now every bike ride turned into a driving lesson.

“What speed would you be doing on that horrible wee bend coming up?”

“Right. I think you'll have better control next time.”

We roll on in the cold morning air.

You should never, ever attempt to teach - or learn from - your spouse how to drive, we are told. Generally speaking this is probably true. But it's always been a pastime of sorts for us to share skill sets. We fall into the roles of teacher/pupil willingly and reverse them with ease. Now it was me who wished to acquire a skill, in which he happened to excel.

Oh to drive a car with manual transmission!

Okay, but… why?! Well, firstly - because outside of North America, it is a useful skill to have. The majority of cars are “stick.” Over the past two years in rural Ireland I’ve been in situations that had made me feel helpless and useless, unable to be self-reliant or to help others in need, unable to take charge in emergency situations - all because I could not drive a manual motor vehicle. It did not sit well with me. If I elected not to drive, I wanted it to be out of choice and not lack of ability.

And also...  What the heck, I am just going to say it: Manual transmission is a lot of fun.

I discovered this two years ago, when I first gave it a try on the beach. There was something about changing the gears, feeling the engine… I had never enjoyed driving until that moment. But this, I had to admit, was intoxicating. Of course it was also the car owner's company.

But shortly after that day, his lovely old Saab conked. And he replaced it  - "for my sake!”  - with an automatic one he managed to find in the local used car ads. I would borrow it on occasion, but never experienced the same enthusiasm as I did that day on the beach. And so two years passed and I never learned the skill of manual driving.

Luckily, the man's approach to purchasing cars is to buy them well-used, then drive them into the ground. So recently it was time again for a replacement. Or, actually two replacements: for he now had a work vehicle and a second car, the latter of which I was welcome to use… as soon as I learned how to drive manual. I would need to for the driver's test I would soon have to take anyway (you must take the test in a manual car for a full operator's license). This would be good motivation.

The learning curve was steeper than I had expected. It had been one thing to drive on an empty beach. Taking the car out on the road was another matter. The problem for most learners is that they stall the engine when starting and stopping. This part I never had trouble with. Even uphill starts (which is to say, most starts around here) proved surprisingly intuitive once the process was explained to me. But the problem I did have was more dangerous, in that once I would get up to speed I could panic and "forget" how to change gears or use the clutch, reverting to my automatic-driving reflexes. Have you ever experienced going from 5th gear straight into 2nd (instead of 4th) while doing around 40mph? It's a displeasure I recommend avoiding, if at all possible!

Naturally, when something is scary we do not want to keep doing it. But it's only through repetition that the nervousness can be driven out of us. And so we repeated the maneuvers that made me anxious until they simply lost that effect.

I am making it seem like this took ages. But it all came together in the course of several intense lessons. In about 2 weeks I was pronounced road-safe. And was welcomed to borrow The Car if I needed it.

And I have to admit, I loved The Car... an older Alfa Romeo, far too sporty for me and in a horrid shade of electric blue that somehow only contributed to its charm. The door handles stuck and the low leather seats managed to smell of the '70s, though the car was considerably younger. But it ran well. Too well. In fact, "well" is not even the right word. It ran beautifully. It handled beautifully. It was an instrument of precision and the sounds it made were music. It was not a car for the neurotic and so, to do it justice, I could not be neurotic in it, half-reclined and holding the stick with a loose, gentle grip. I could drive it. I could truly, calmly, safely drive a manual vehicle.

"Perhaps you can truly, calmly, safely drive it to the mechanic tomorrow then? It needs a dust cover for one of the hubcaps and the man has spares."

"Ok no problem. I'll get it tomorrow."

And that I did, traveling to the mechanic's place 12 miles in the rain, then back over the misty mountain, feeling free and capable.

"Hey, I stopped at home mid-day and saw the car in the driveway. Did you not go out to get the dust cap?"

Shiny and colorful with its ludicrous mystical symbols, the dust cover glistened with raindrops. Naturally, I had cycled over to get it.