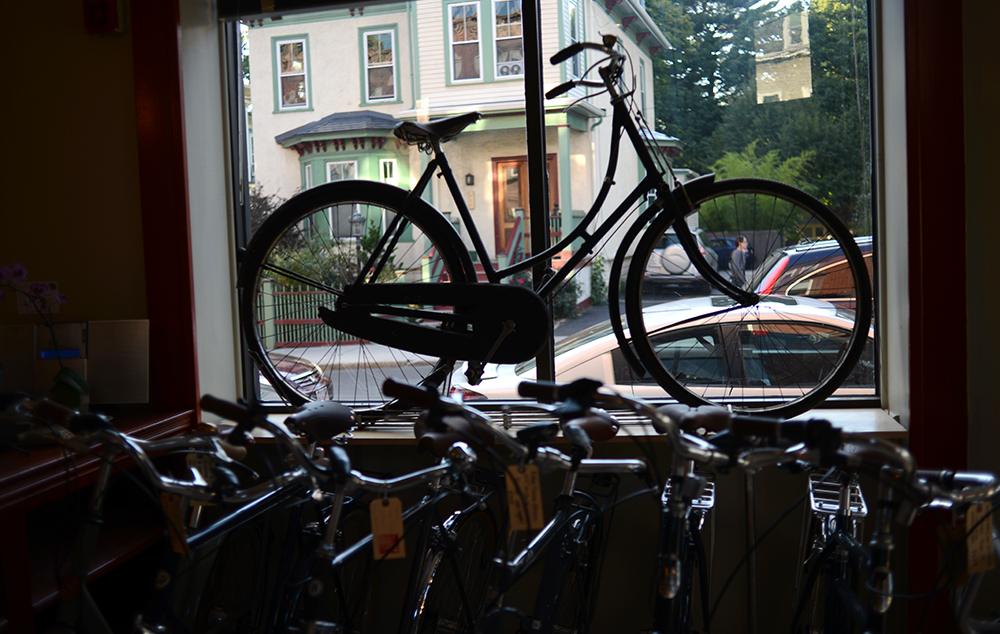 Earlier this week on twitter, the Flying Pigeon bike shop in Los Angeles has mentioned they’d be renting Brompton folding bikes come spring 2016. In Boston and Portland Oregon Bromptons can already be rented at Broadway Bicycles and Clever Cycles, respectively. And of course in the UK, an entire network of bike hire docks has been set up by the manufacturer directly, which, rumor has it, might spread to cities in Ireland soon.

But while these folder rental announcements have perhaps been the most newsworthy, a rental market for bicycles of all types has been quietly thriving across the US and Europe. From shops throughout many cities you can now rent vintage bicycles, cargo bikes, utility bicycles, even high-end roadbikes. You can rent them for a day, for a weekend, sometimes even for a month or longer. While some bike shops promote their rental services, others offer them upon request but do not advertise. In fact, a lot of it, quite frankly, is informal and known about through local word of mouth. If you are looking for a bicycle to rent, it never hurts to ask around, even if it may not seem that a culture of it exists in your neck of the woods.

But why rent a bicycle to begin with?

One obvious reason is if you are a visitor. While many major cities now offer bike-share programmes, these can be awkward for non-residents to use or expensive to use beyond one short trip at a time. The bike-share bikes may also lack features that the visitor might want while they are in town - for instance, extra storage capacity for shopping, low gears for hills, compactness for use in public transport, etc. And while private companies that specialise in bike rentals exist as well, experienced cyclists tend to be less than ecstatic about the quality and condition of their offerings. Many would much prefer to explore their new surroundings on the type of bicycle they are used to riding at home, and the idea of renting one in well-maintained condition, from a friendly, knowledgeable, flexible bike shop appeals.

Renting can also be a valuable resource for those in the market for a new bicycle, providing opportunity to test ride long term before deciding whether a particular make and model is right for them. As you might have noticed, nice bicycles can be quite expensive. And for potential customers, the lack of sufficient opportunity to try a bike before buying is frustrating. Even in the US, where it is customary for bike shops to allow for test rides, these test rides are usually limited - both in the milage considered acceptable, and in the terrain to which the bike shop's location restricts the tester. In other countries (Northern Ireland, for instance, based on my experience), test rides can be out of the question altogether. You can stand over a bike, lift it, examine it - but the tyres mustn't roll off the shop floor!

In both the limited test ride and the no test ride scenarios, shop owners are (understandably) concerned over their bicycles losing retail value once ridden, since they'd no longer be "new." Not every shop can afford a fleet of demo models, destined to be scuffed and sold at clearance prices at the season's end. Offering the floor models for rent would solve this problem for the shop owners, bringing in revenue that would certainly make up for the machines' devaluation, while at the same time offering a valuable service to their customers.

I myself have used bike rental services twice, with pleasing results. In Vienna, I rented "with option to buy" a vintage Waffenrad from Heavy Pedals. This unique, just-right-for-me bicycle improved the quality of my work commute gazillion-fold and satisfied my love of vintage bikes, without committing me to ownership in a country I only lived in part-time. And before I bought my Seven roadbike, I rented one for a month from the Ride Studio Cafe in Boston - which, no doubt, was largely responsible for why, once I did order my own Seven, the fit and feel came out so perfectly.

Potentially beneficial for all parties involved, I believe the rental market is something bike shop owners should consider. How nice would it be, if rentals were promoted openly, with a guide to where to rent what kind of bike, by country and city, available as an "app"?  It could happen!