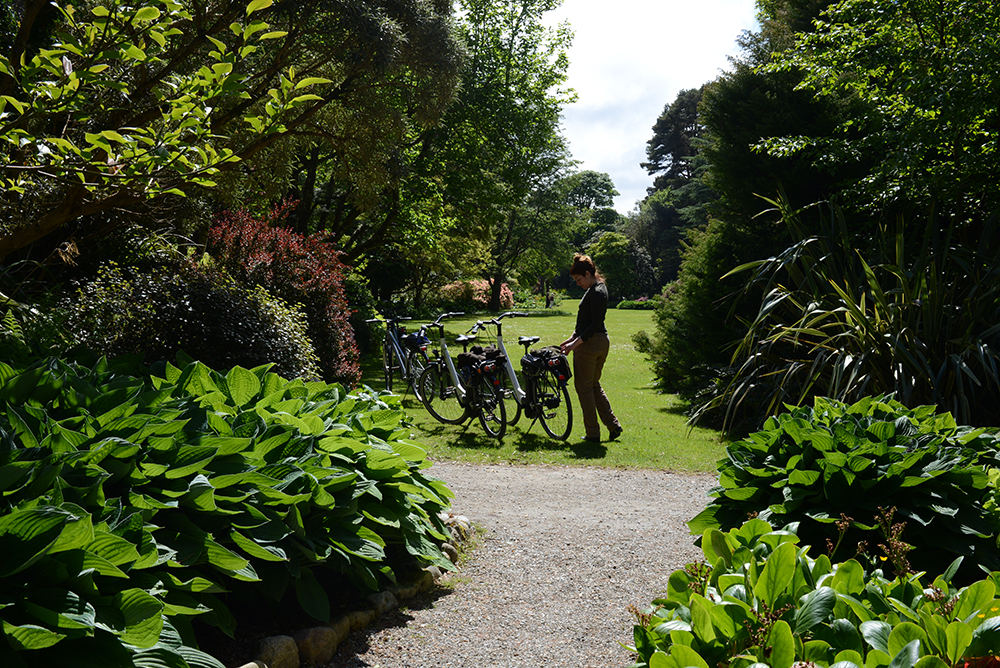 When I owned and drove my first car, I began to observe a funny phenomenon. Often I would park beside whatever other cars would happen to be there, only to return and find my vehicle in the company of a "cousin" - a car of the same (somewhat unusual) make and similar vintage. On a few exciting occasions it would even be a "twin" of the same colour. And on rarer occasions still, it would be an entire gathering of several "related" vehicles. It was as if, given the option, like would gravitate to like, the machines compelling their drivers to gather them into a flock. When the mood was right and my parking skills up to the task, I too would play along.

Having all but forgotten this game a decade later, I was delighted to emerge from a municipal building in Vienna one evening to find not one, but, seemingly, three exemplars of my bicycle locked up to the fence where I'd left it. The two extra bikes were deliberately "posed" in a similar manner to my own machine; the rhythm and symmetry of the three of them, casting long shadows in the setting sun against the chainlink fence, was breath-taking. As I approached from a distance, I could not even tell which was mine, and it was only when I drew closer that its broken, duct-taped headlamp mount gave it away. With a silly smile on my face I looked for a sign of the owners. Had it been a couple of friends who had arrived together? Or, more improbably still, two entirely unconnected persons who happened to own beat-up old Waffenrads similar to mine, each with the good humour to collaborate in staging this tableaux?

Later in Boston, I would play this game with vintage English 3-speeds and with mixtes, with Dutch bikes and - for the brief, glorious 2 months that I owned one - with Xtracycles. Sometimes - if a coincidence was especially uncanny - other cyclists would leave notes on my bike or I on theirs. But most of the time, it was a matter of returning to where I'd locked up my bike and discovering a lookalike, tethered meaningfully to the same pole despite the availability of other spaces. It was a silly game, but it always made me grin.

In the town of Coleraine which I sometimes visit, an old Viking mixte stands locked up beside the bank, always in the same spot. Once, I locked up my own Viking beside it. I had no idea whether the owner noticed, as when I came back for my bike the Coleraine Viking was still there. So, probably not, I thought. Some time later I did it again, with the same result. Then on a third occasion, I must have arrived on the lunch hour, because the other bicycle was absent. I locked my own bike to a different rack this time. When I returned, its Viking cousin was nestled beside it, instead of at its usual rack. I'd be lying if I did not admit that this little "victory" brought a tear or two to my eye (though of course it could have been the 30mph wind).

In the Glenveagh National Park, we once rented electric(!) bikes and rode them all over the lovely hilly trails. Then, taking a tea break, we left them in a secluded clearing (instead of the usual spot designated for bike parking), as we'd forgotten to take locks and did not want them to attract attention. Three quarters of an hour later, we returned to behold an amazing scene: The entire clearing was now teeming with rental bicycles. Having spotted ours, others must have decided that this was the place to leave one's rental bike if you did not bring a lock - and duly followed suit. After that, the more of them were gathered, the more legitimate and inviting the spot began to look until the bikes were over a dozen in number.

For some inexplicable reason, the sight of the green, shaded clearing, with a flock of bicycles gathered upon it, made me stupidly, disproportionately happy. I would have nearly left notes on them all - saying what, I don't exactly know.
Labels: bike friends commentary stories