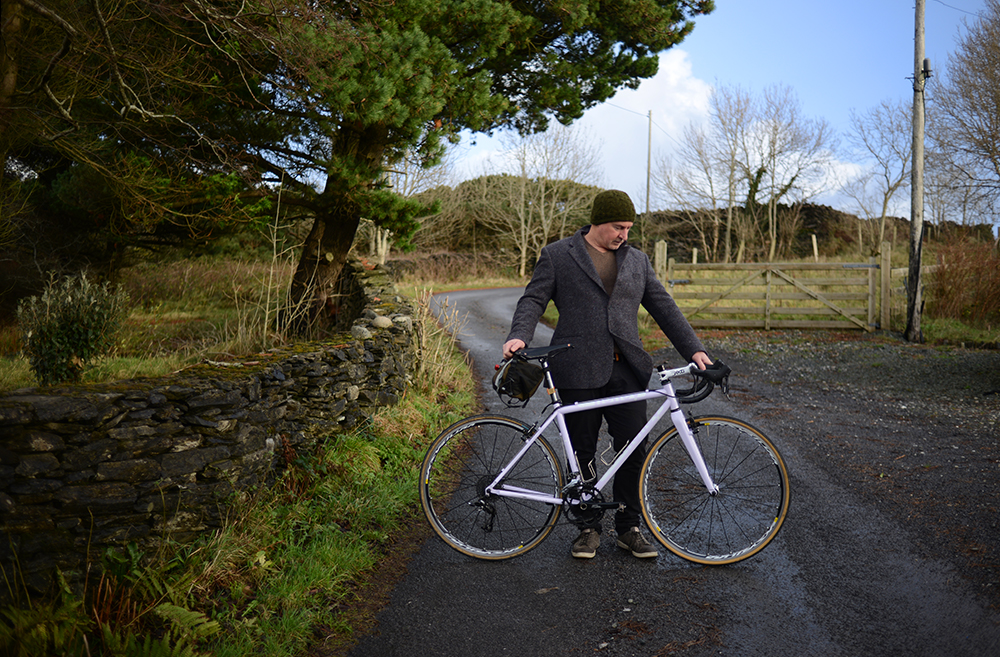 I did not meet my spouse through cycling. He was a pilot instructor at a small airfield I happened to be photographing one day (a meeting I unwittingly documented here!). It was only some time after, perhaps as an attempt at wooing, that he mentioned he too rode a bike. Turned out he had been a rather strong club cyclist some years ago ("back before everyone was doing it"). But by the time we met he'd been off the bike for nearly a decade, focusing instead on running and weight training. His machine, circa the early 2000's, had since been wilting in a shed: a battered aluminium road frame with a worn Ultegra drivetrain, 21mm tyres, a thin wedge of a racing saddle, and decomposing Look pedals. He remembered the bike as being fast, albeit uncomfortable - which he saw as a logical, and tolerable, trade-off. When he tried it after the long absence, however, the discomfort proved too much while the speed he remembered was no longer there to compensate. He rode with me a few times, but it clearly did not feel nice. I proposed he buy a more comfortable bike and made some suggestions. But he was skeptical a new bike would make a difference. It was him that needed work, he said, not the bike. Well, these things are not mutually exclusive, I ventured - but decided not to push the subject further. Perhaps this was for the best, as cycling as a couple is not always a good idea! 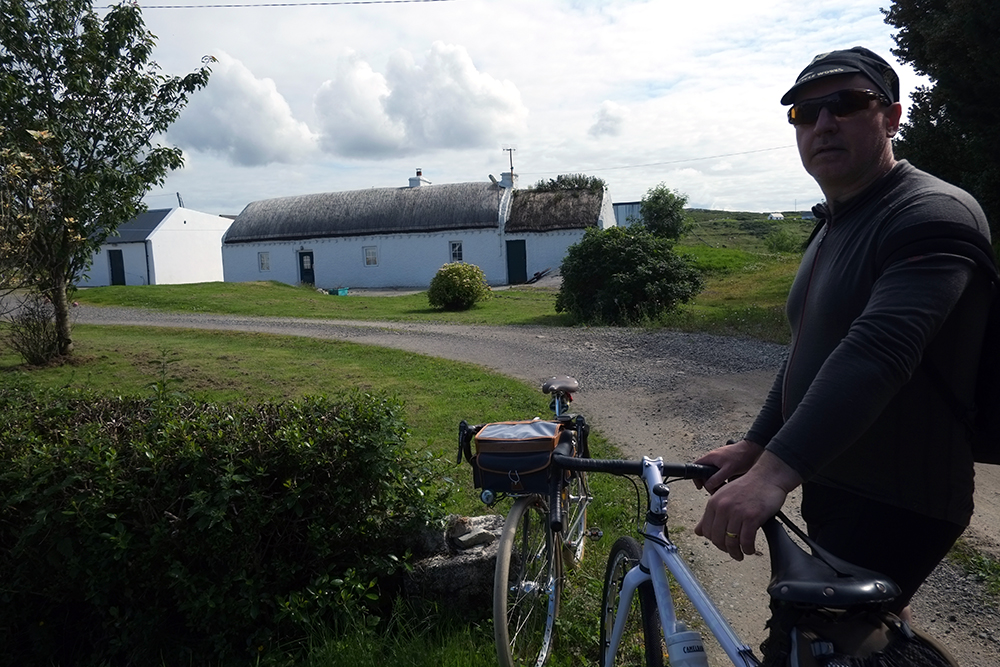 Fast forward to the following year. We were now sharing a household, and that household soon began to fill with all manner of bicycles. One of the bikes I eventually brought over from Boston was my Honey Cyclocross: an aggressive racing bike, with an ultra-lightweight steel frame, carbon fork and clearance for wide tyres. I had already lent this bike to a few male friends in Ireland - who had enjoyed it tremendously and commented on how comfortable and fast it was. So when I noticed Gary eying me wistfully when I would set off on road rides, I suggested he take the Honey and join me.

The lilac Honey CX is pretty small, and the gentleman in question is 4" taller than I am. But after fiddling with the saddle height and setback, and replacing the stem, he was able to get the fit surprisingly close to his ideal. Although most of the components and accessories on this bike were alien to him, he immediately loved the SRAM brake levers, the 50/34 by 11-32 gearing, the Crankbrothers pedals and the Selle Anatomica saddle - preferring them to the components he had hitherto used, and declaring after the first ride than any bike he buys himself in future will be fitted with same.

The bicycle itself he found "extremely comfortable" and "eager to accelerate." However, being steel, he speculated, was certainly a handicap compared to a carbon fibre or even an aluminium bike from the same era. "Not necessarily," I said, trying to stay calm and not go into Preacher Mode, instead gently pointing him toward information on contemporary lightweight steels, oversized tubing, custom builders, et cetera. He was interested, but remained skeptical. He would ride my comfy bike to get himself back into shape, then shop for a "proper" road racer once ready. Sounds good, I said. On request, I described my impressions of a dozen or so carbon fibre bicycles I've tested over the years (Parlee still being my favourite). Truth be told, I actually began to look forward to having a full-on carbon fibre bike from a mainstream manufacturer in the house. It was not something I would ever get for myself, but variety is a good thing. I was not uncurious about the Pinarellos and Scotts he was eying up. 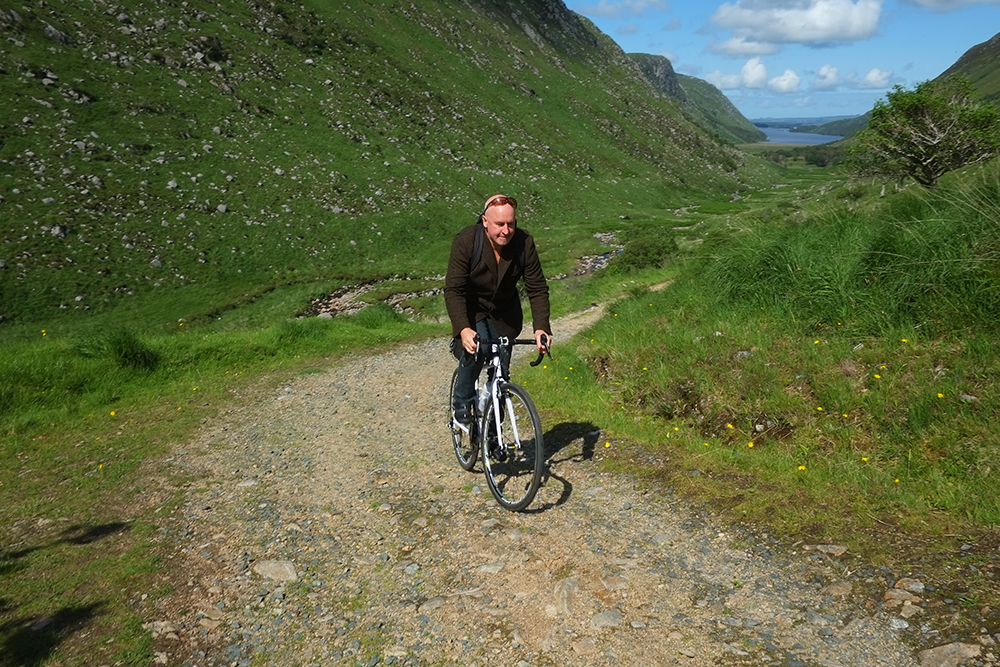 Fast forward another year. It took my now-husband some time to get back to his former cycling shape, but eventually he did it - maintaining a 20mph pace on flats with ease and scaling 20% grades nonchalantly. In the process, we rode together a lot and got on surprisingly well despite our radically different approaches to cycling - but that is a topic for another time! More to the point, he began shopping for a bicycle of his own.

As planned, he started off looking at carbon fibre frames. Happily, I accompanied him to local bike shops, spending hours browsing rows of Giants, Kuotas, Focus bikes, Cervelos. At one point I fully expected us to come home with a Pinarello Dogma, but that too was dismissed. Generally he was not wowed by any of the bikes he looked at, compared to the bike he was borrowing from me. After spending some time on internet forums and talking to some local club cyclists, he also grew alarmed at reports of the carbon bikes being easily damaged in crashes (during one infamous Sunday morning club ride a few months ago, a crash resulted in something like 6 riders snapping their frames in half!). Finally, having done some research on pricing, he was perplexed to find that custom and semi-custom bikes made by builders specialising in lightweight steel performance frames were not more (in fact, often less!) expensive than the mass-produced options. Did I think a steel bike might suit him better after all? It's possible, I said, but reiterated that there are different kinds of steel, and different kinds of carbon, so it's not as simple as a linear hierarchy of materials - adding that, moreover, geometry matters a great deal as well. So which bikes did I think might suit him? I then gently pointed him toward the likes of Dario Pegoretti, to the Velocipede Salon, and waited for the magic to take effect.

A month later: "You know the wee Honey bike I'm riding?"
Yes, I think I recall the one.
"They do a road racing model like."
Yup.
"What size do you think I should get?..." 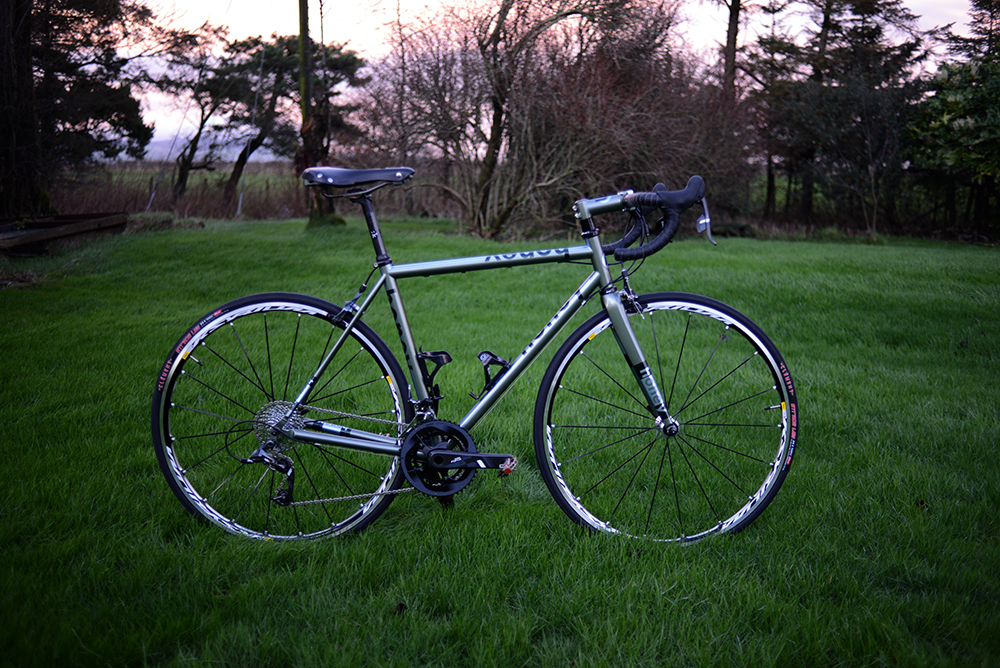 Erm... I mean, it's nice he came to his own conclusions. Heck, when the flooding and hurricane winds subside, he might even actually get to ride his brand-new beauty and let me know how he likes it! 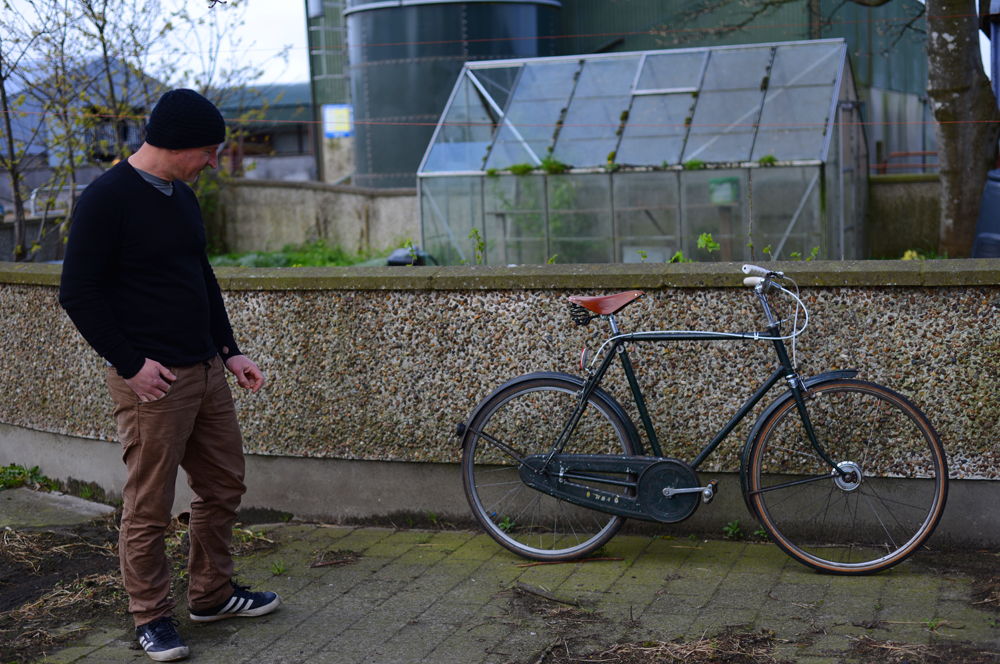 This is not to say that all my gentle steerings have been successful. The beautiful BSA roadster we "inherited" from my friend Clive, which I thought would suit him perfectly as a "dress in regular clothing" beater, was categorically rejected after several tries ("too heavy, too slow, and uncomfortable" - what!). On the other hand, the long and low Dawes I'd thought would be too decrepit for his liking, was embraced with enthusiasm (minus the PowerGrips and front rack). 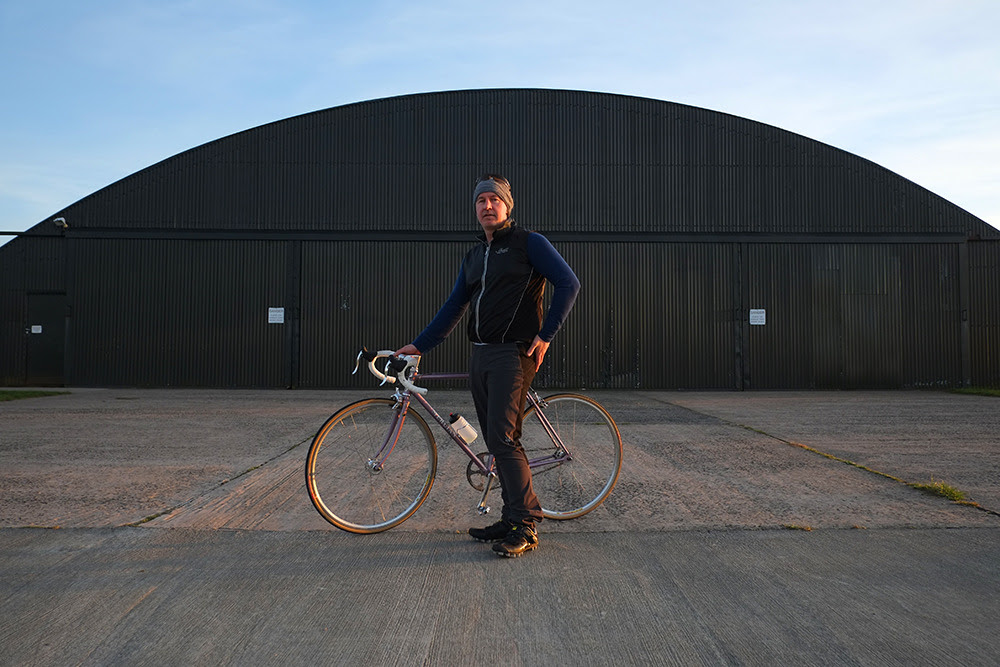 To my initial delight, but subsequent regret, he loves my Mercian single speed - to the point I had to pry it away before he modified it so much I wasn't able to ride it myself! On the other hand, I am trying not to be offended that he dislikes my DIY 650B bike. For what it's worth, he dislikes any low trail bicycle he tries, with surprising consistency, and without knowing they are low trail.

Rather mystifyingly, he loves racing my loopiest, frilliest "ladies bikes" to the shop, yet finds the unisex Brompton embarrassingly "girly" to be seen astride. And, despite many attempts to show him The Light, he hates, and I mean hates any sort of rack or bag attached to a bike other than the teensiest saddle wedge, preferring instead to carry a backpack (can you imagine?) if needed.

Being passionate about bicycles can make it difficult to remain neutral as we watch our friends or family make their own choices. But while we can certainly make suggestions and offer advice when asked, ultimately we cannot control other persons' preferences, tastes or desires. It is good to know when to lay off. Better, I find, to sit back and let them enjoy their own journey - including making their own mistakes, if it comes to that. In the end, they will accumulate their own experiences, good and bad - which will make their decision better informed than any advice we can offer.