In a World of Our Own Making 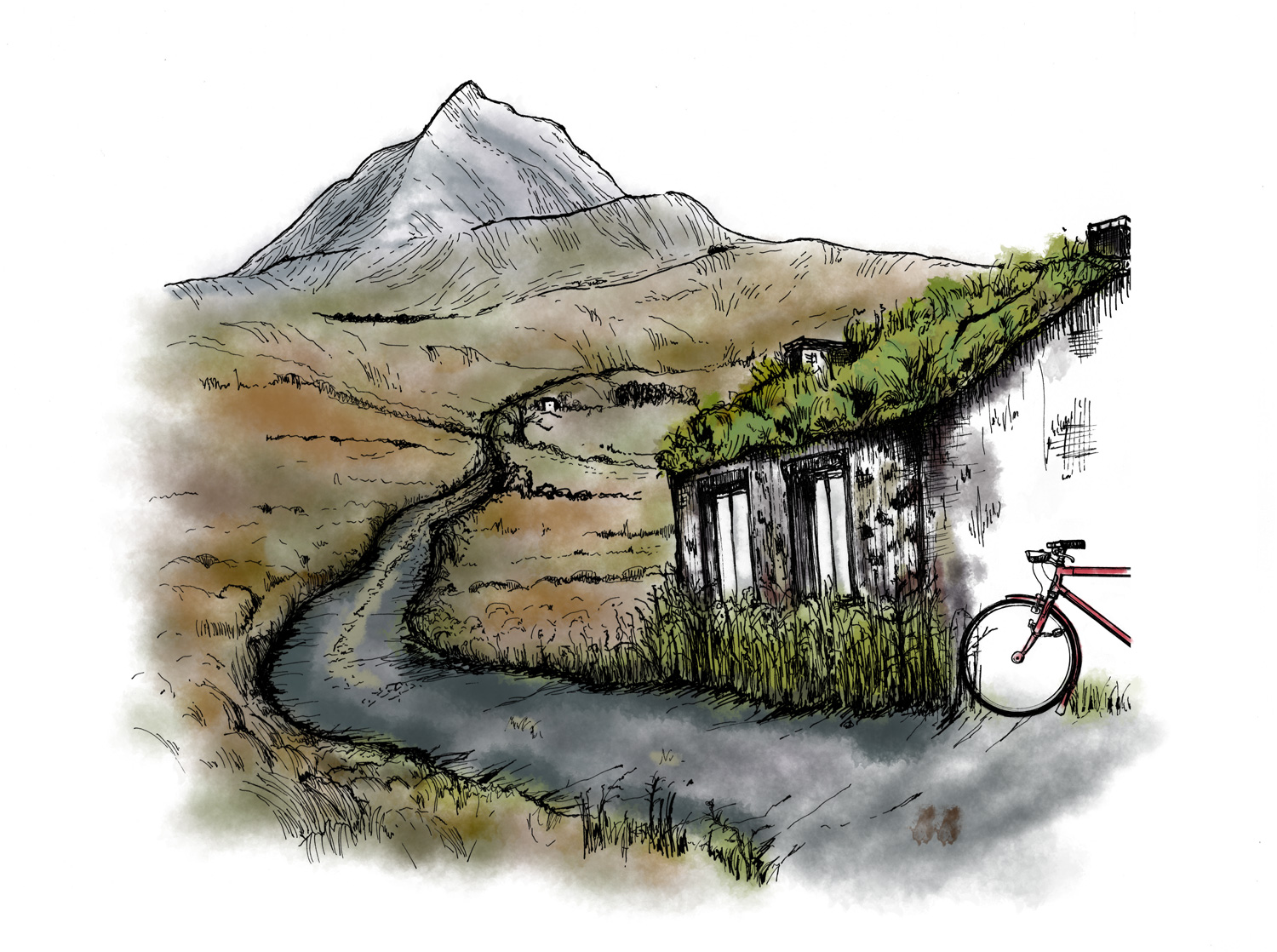 {drawing by pixelgraphix}
Having spent the past two years in "recovery ride" mode, at the start of 2016 I finally feel... well, more or less recovered! Creatively I am on surer footing and have a better sense of direction. It has also, I think, only now truly sunk in that my move to Ireland is permanent and real, rather than some bizarre dream I am about to wake up from. As a result I've been less tentative in making connections, less reluctant to plan. And in the coming months I look forward to several new projects that I'm either starting myself, or am taking part in.

One of these is the Slí na gCopaleen festival, which I feel exceptionally lucky to be helping to organise. Translatable roughly as "na gCopaleen's way," the festival's name is a reference to one of the pseudonyms of the Irish writer Brian O'Nolan, aka Flann O'Brien - author of that bicycling metaphysics bible, The Third Policeman. It was just over two years ago now that I read this book (see: Is This About a Bicycle?) and fell in love. I fell in love not only with the author's writing, but also with his unique ability to shape language to accommodate his ideas, rather than allowing for the more usual, reverse, relationship between the two. Well, I won't get too deep and analytical in this wee bicycling blog, but anyway: There is a Flann O'Brian festival in Donegal coming up, and it will be lovely, and free to attend, and will feature dinner talks and live music and a themed bicycle ride, and if you would like to join us check the website for info and updates. 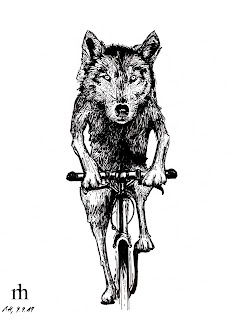 Among the things I have enjoyed while involved with this event, has been working with the excellent Berlin-based illustrator Manuela Hoffmann - aka pixelgraphix. I "met" Manuela through instagram, where we connected over our mutual love of bicycles and fountain pens. For years I had followed her snaps, and watched her develop as an illustrator. So when several of my own projects required graphics (I draw and paint myself, but illustration is quite different!), I turned to Manuela for her striking pen-and-ink style, as well as for her cyclist's perspective.

Having cycled in central Berlin for years ("messy and cramped infrastructure, but you can get almost anywhere by bike!") Manuela now lives to the south of the city. From there, she often rides to the forest and the Havel lakes - either alone on her Stevens touring bike, or with her family on their PedalPower tandem. The imagery found in her work is much inspired by these trips.

"A lot of my ideas and projects stem from long bike rides where my thoughts are free to ramble about," Manuela tells me. And somehow, looking even at the work where the subjectmatter is seemingly not cycling-related at all, I can sense that.

For the Slí na gCopaleen festival image, I sent Manuela some photos I'd taken and described the look and feel I was going for. I wanted to combine a vast Donegal bogscape, I explained, with a more intimate scene of a bicycle "crouching in wait, expectantly." Undeterred by such a description, Manuela set to work. And after some back and forth feedback, and some closeup shots of "Katy" for reference, the scene I had visualised was brought into existence, as if by magic - complete with expectant crouching. 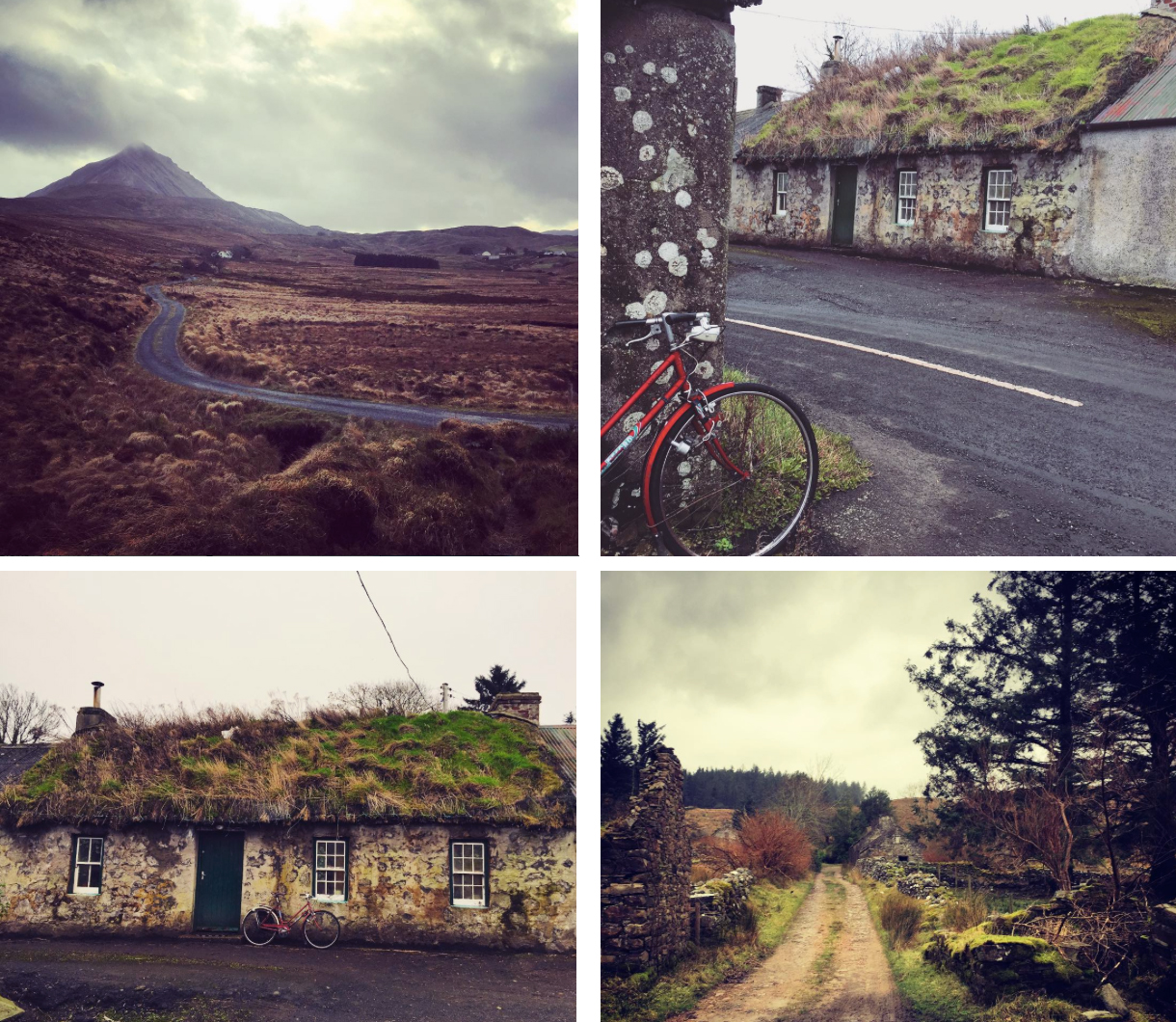 One interesting thing about the end result illustration, is that the landscape it depicts is ultimately fictional - combining a mountain road in western Donegal with elements of rural County Derry. Even the bicycle is a fiction - the otherwise meticulously replicated Lady's Record anatomically altered into a diamond frame model.

We did these things initially, because we thought it would make for a stronger image. But on reflection, this collaging of geography and objects also serves to reinforce the Flann O'Brien tribute: referencing his life on both sides of the border, and his tendency to morph ideas, concepts, things, before the reader fully grasps what is being done.

The magic of drawing and writing, is the magic of imagination: we can create entire worlds of our own making, willing things into existence that might, strictly speaking, not exist in the exact form or configuration we would like them to.

And in a way I am finding difficult to articulate, there is an element of this same creativity to the act of cycling in itself. The combination of the bicyclist's pace, vantage point, and heightened senses has the effect of loosening the imagination. The winding road ahead becomes our canvas, our blank piece of writing paper. And so we cycle through a world of our own making - in equal measure beautiful and dissonant.
Labels: art bicycle events bike friends Ireland