The Human Factor: How Do We Gauge Rider Preferences? 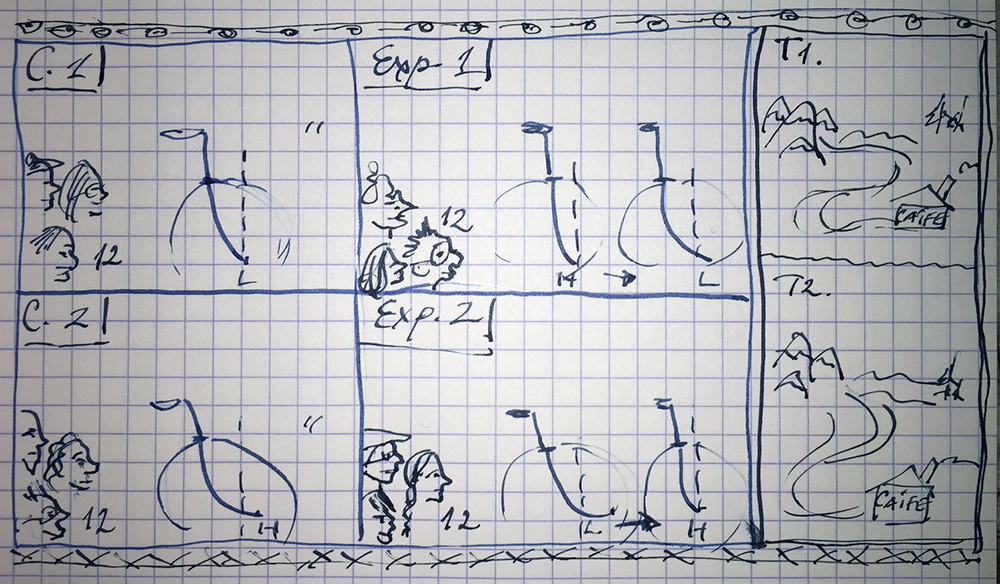 So I feel like a completely hopeless case of bike geekery after having spent an entire evening "working" on this! But after I posted about the Bella Ciao two-fork project, a friend from my former academic days directed my attention to the bit where I wrote the following:


...there is no question of this project being an experiment in the scientific sense - if only because the tester (myself, that is) was aware from the start which version was which, and had pre-conceived notions of what to expect from each. But I think that, at least in theory, it would be possible to arrange a blind test of this bike with the two forks. ...The visual difference is quite subtle - so that [potential testers] might very well not know which version they'd be trying, even after switching from one to the other.

"Oh come on, you can't just leave it at that! Why not describe how you'd go about doing that blind test?"

"Like, if someone were to do an actual experiment?"

"Hmm... Because it would be a colossal waste of time?"

"Yes, I suppose it would. But what fun!"

With a drink in hand and a long stormy night ahead, it began to look that way.


So how would we gauge rider preference in bicycle handling, and why would we even care? Well, to backtrack a tad, here is the thing. Most of what we know about bicycle handling is derived from the field of Physics. That seems only right and proper - we've got stuff like energy, momentum, rolling resistance, centrifugal forces to deal with - clearly all in the Physics domain. Now, Physics is a hard Science, chalk full of laws and numbers and formulas and stuff. Therefore, we expect it to yield concrete, unambiguous answers to our bicycle handling questions - which it does, and which are the answers that much of bicycling literature presents as fact. And don't get me wrong: It is fact. Nevertheless it does not tell the whole story. Because physics alone fails to address something quite crucial: the human factor - that is, the rider's perception of handling, which in practice, is really the final product that interests us. "How will this bicycle feel for us to ride?" Is the question we are really asking when we ask about its handling. And that question cannot be answered by physics alone.

Take as an example the "low trail" question. It is fair to say that there is disagreement among riders as to what effect, or cluster of effects, this aspect of front-end geometry has on handling. Anecdotally, some riders report that they find it conducive for riding no-hands, others feel it makes riding no hands impossible. Some find it easier to corner at high speeds, others find it more difficult. Even in a broader sense, some find the general sensation of low trail handling intuitive whereas others describe it as disconcerting. Of course the problem is that all of this feedback is anecdotal. Furthermore, it tends to come from riders who are passionate about the topic, and have pre-conceived notions about bicycle handling or design which might bias their impressions (present company included!).

Like it or not, we are in the realm of subjective human sensations here. So if we want to learn the real answer to a question such as "How do riders tend to respond to a bicycle's trail properties?" we need to design a proper experiment, in a controlled environment, and in a way that cuts through these potential biases. And for that it is useful to turn to the field of experimental psychology.

As it happens, this is a field I've dedicated a good few years of my life to in the past. If I were designing a study to gauge trail preferences based on the two-forked bike sent to me by Bella Ciao, it would look something like this (complete with pained attempt at catchy title):

Aims
The purpose of this study is to determine how cyclists will respond to a bicycle with standard vs low trail geometry.

Method
Several groups of participants will be asked to ride bicycles over a pre-determined course, then provide feedback about their experience.

Participant Recruitment
To attain statistical significance in data analysis, a minimum of 48 adult participants should take part in this study. The target participant is an experienced transportation cyclist within the height range appropriate for the sample bicycle used in the study, and with limited knowledge of (or interest in) bicycle geometry.

Initial participant recruitment may take place at bicycling events, popular bike parking facilities, etc., where such persons are likely to be found. Participants may be offered compensation for their time. In the first instance, potential participants will be asked two basic qualifying questions: whether they’d be interested in taking part in a bicycling-related study, and what is the nature of their cycling experience. Those who answer “yes” to question 1 and report a minimum of 2 years regular bicycle commuting experience will be deemed eligible for the study and invited for further screening.

Potential participants will then be given a number of screening questions to ensure that their knowledge of bicycle geometry is appropriately limited. Participants who "pass" (i.e fail) the geometry test will be invited to take part in the experimental trials.

Procedure
Participants will take part in the study one at a time. Upon arrival, each participant will be told that they will take part in two back-to-back trials, where they will be asked to ride two very similar bicycles over an identical course, then report how each bicycle feels. The exact nature of the difference between the two bicycles they will try will not be explained to them.

Trial 1:
Each participant will be given a bicycle and asked to ride it along a pre-determined loop over varied terrain. Upon completion of the course, the participant will be handed a questionnaire designed to solicit feedback about various aspects of ride quality and handling, as well as to gauge their attitude toward the bike (i.e. how much they like it).

Trial 2:
After a short break, the participant will be given an identical-looking bicycle. They will be told it is very similar to the first bicycle they tried, and that they might notice some differences, or they might not. The procedure described in Trial 1 will then be repeated.

The bicycles which participants receive in trials 1 & 2 will differ according to the group they are assigned to, in the following manner:

Control Group 1:
Participants in this group will ride the standard trail bicycle in both Trial 1 and Trial 2 (while still believing they are trying two different bikes).

Control Group 2:
Participants in this group will ride the low trail bicycle in both Trial 1and Trial 2 (while still believing they are trying two different bikes).

The purpose of the two experimental groups is to control for potential priming effects, whereby the order in which the bicycles are tried might colour rider experience. The purpose of the control groups is to control for potential placebo effects, whereby the mere awareness that they "should" sense a difference between the two bikes might colour rider experience.

Materials
Bicycle: A single bicycle will be used over the course of the study, fitted, as appropriate, with either the manufacturer's standard fork (resulting in mid trail), or a modified fork with longer rake (resulting in low trail). The bicycle's saddle and handlebar height will be fitted for each participant individually.

Course: The course over which participants will cycle should be approximately 3-4 miles long, and include aspects that make front-end geometry noticeable, such as tight turns, descents, bends.

Questionnaire: The questionnaire used to gauge riders' feedback should be designed by a team of social scientists with experience in conducting similar studies. A combination of free-form and Likert scale questions will likely be used.

Analyses
After all 48 participants complete the study and questionnaire data is collected, statistical analyses will be conducted to compare riders' responses to the low trail vs standard bicycles, once other factors are controlled for. The analyses will also test for patterns based on rider characteristics such as gender, height, weight, age, and cycling experience.

Predictions
Anecdotal evidence suggests that riders' perceptions of a bicycle's handling differ, and, consequently, so do their preferences for low vs mid trail bikes. I expect the results of this study to confirm this. Statistical analyses should show a split both in the types of characteristics participants attribute to one bike vs the other, and in participant preferences for one over the other.

It is not incompatible with these predictions that an overall pattern in rider perceptions and preferences may nonetheless emerge (i.e. that riders on the whole tend to prefer X trail, and report such and such characteristics for low vs mid trail handling). I personally have no predictions as to what shape this pattern will take. Either way, the results might prove informative for bicycle manufacturers, framebuilders, and others in the industry for whom the topic is of relevance.

Soooo dear readers! If you have managed to read this far, congratulations (and double points if you don't have a drink in hand)! And if you are wondering what the point to all of this is - as surely it is unrealistic to expect any interested party (Bicycling Quarterly comes to mind) to dedicate the time and financial resources necessary for a study of this type to actually be developed and conducted professionally - it is mainly this: In order for anyone to make claims about what any aspect of a bicycle's construction, ride quality or handling feels to "people in general" (rather than just to themselves and their similar-minded friends), they would pretty much have to conduct a study like this. A study designed by someone who knows how to do it right, involving a statistically significant number of randomly-recruited participants, controlled conditions, etc., etc. Otherwise, we are all just asserting our own preferences with nothing but cherry-picked anecdotal evidence to back it up. Not that there's anything wrong with that, if it's all in good fun. But if you want to be scientific about it? Offer some food for thought to your friendly neighbourhood social psych grad student, and see if they're up for a project!
Labels: bicycle industry geometry handling low trail silliness