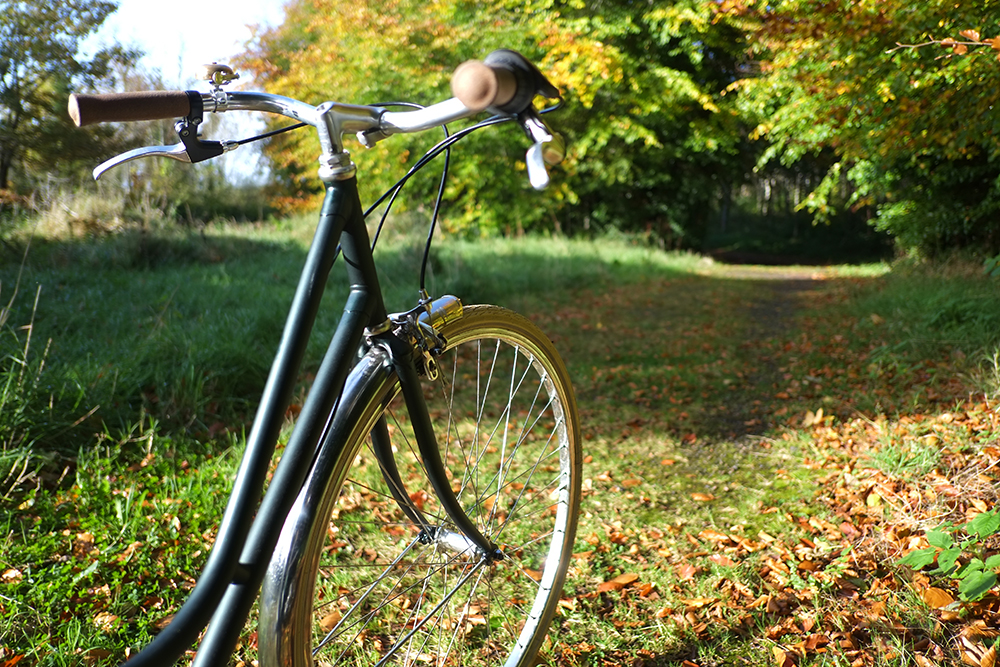 Over the summer I wrote about a dream project I had instigated with Bella Ciao Bicycles: They were to send me an upright step through bicycle (the Neorealista model) with two forks - their standard fork, and an alternative, low trail fork. I was to try the bike with both forks and tell them what I thought of the difference. 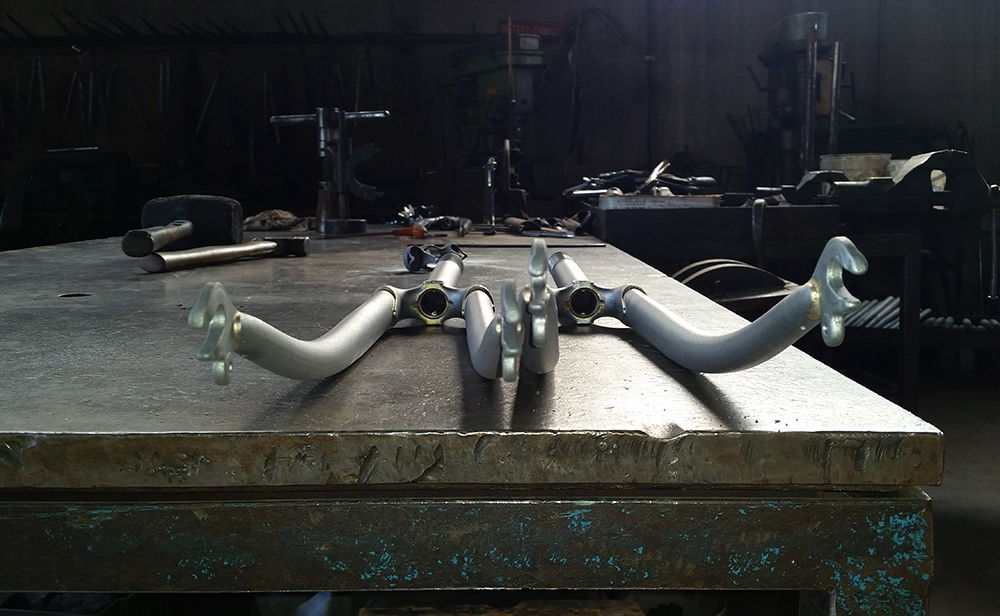 To re-cap for those who are not bike geometry geeks: A bicycle's trail, in layman's terms, has to do with how far forward its fork blades jut out (i.e. the "rake"), in relation to its headtube. The more forward the fork, the lower the trail number (measured in mm). A trail figure in the 50s is said to be neutral or mid-trail. A number in the mid-60s or higher is considered high trail. And trail in the 40s or lower is considered low. This aspect of a bicycle's front-end geometry is thought to affect handling in a variety of ways - notably, its steering behaviour and its ability to carry a front load (you can read more about all that here). While most bicycles produced today have trail in the mid to high range,  trends in this respect have varied through the decades. And increasingly, manufacturers are beginning to experiment with low trail again.

For a good few years now, I have been fascinated with this obscure bit of bicycle geometry. And so when the two-forked Bella Ciao bicycle arrived, I was excited beyond words to try it. To begin with, I fitted it with the standard fork and rode it that way for a month and a half. Then about a week ago, I switched to the low trail fork. 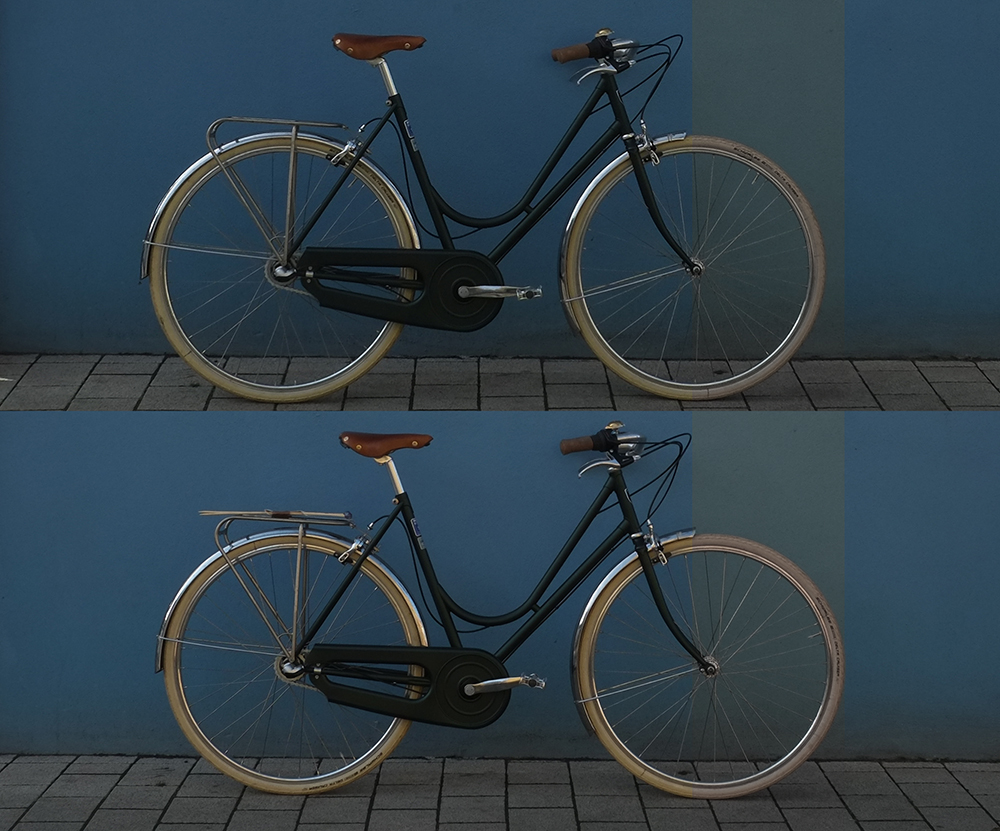 Despite my casual use of the word "experiment" here, there is no question of this project being an actual experiment in the scientific sense - if only because the tester (myself, that is) was aware from the start of which version was which, and had pre-conceived notions of what to expect from each of them. But I think that, at least in theory, it would be possible to arrange a blind test of this bike with the two forks. As you can see in the photos above, the visual difference is quite subtle - so that unless testers are equipped with tape measurers or pay attention to small differences in the distance between their toe and front tyre, they might very well not know which version they'd be trying, even after switching from one to another.

In any case, here you can see the bicycle in the before and after state for comparison. The standard fork is fitted in the top photo. The low trail fork if fitted in the bottom photo. Now, as far as concrete figures, the only one I can give you is that there is an inch difference between the rakes. As Bella Ciao does not release its geometry charts, I cannot give official trail numbers of the two forks. But according to my own guesstimates based on crude measurements, it is something like 65mm for the standard fork and 40mm for the low trail fork. This latter figure is at the high end of what is considered "low trail" territory, so it was really a rather conservative alteration. Nonetheless, the difference should produce some corresponding difference in the bicycle's handling. 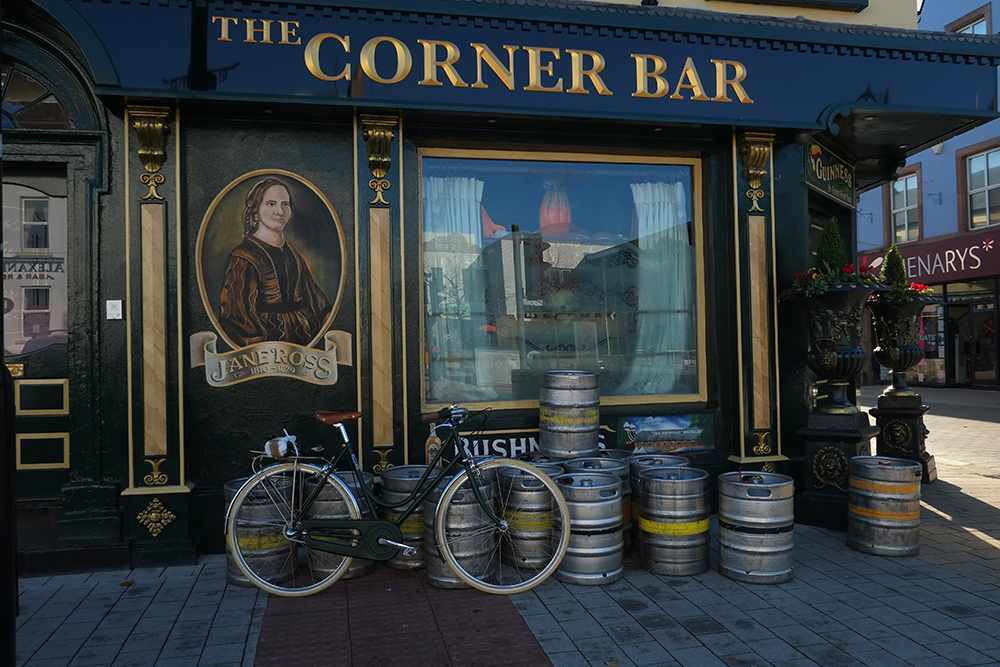 Excited to experience these differences, I set off from the bustling metropolis of Limavady. Here I should explain that when it came time to fit the second fork I noticed a small problem (one of the fittings had been powdercoated over and required re-drilling), which caused me to seek the assistance of a bicycle shop. This actually worked out pretty well, as it resulted in back to back rides of equal distances, with the new fork tested while memories of the original one were still fresh on my mind.

Riding with the low trail forked bike in this manner, I immediately felt a difference. But that difference was not what I had expected. Rather than feeling a change in the handling, what I felt was a very distinct change in the feel of the road: The ride was noticeably plusher, cushier, less jittery over bumps and uneven patches - just overall smoother. This is not to say that the Bella Ciao is a rough ride to begin with. But those who switch to it from, say, a vintage roadster or a Dutch bike (which is often the case), will notice that it isn't quite as smooth. It is a far more responsive, faster, more lightweight category of machine. But you do feel the texture of the road beneath you a bit more on it.

Now with the low trail fork, I felt it only as a distant echo. The same 8 mile stretch of crumbly chipseal I had just cycled on with the standard fork, was now transformed beneath my wheels, as if a crew of pavers had arrived to smooth and polish its surface. 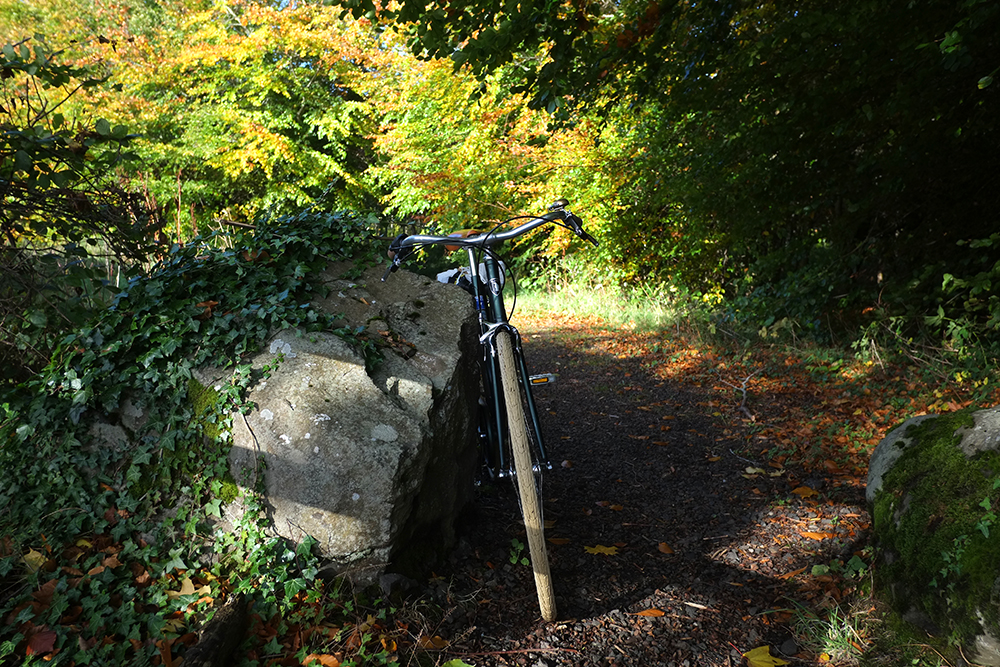 To investigate this side of things further, I veered off into the woods and rode along the unpaved forest trail for as long as I could manage before it disintegrated into MTB territory requiring skillz I lacked. Whether going over stones, roots or rutted-out stretches of hard packed dirt, I couldn't help but marvel at how much more dampened the roughness felt with the new fork. In truth I had not expected such a difference from the additional 25mm of rake. In fact, my expectations had been so focused on handling, I had forgotten to even think about any other aspect of things.

Now, as far as the handling itself (the way the bicycle steers, corners, etc.), in the first instance I was rather disappointed: I could not really sense much of a change. The main reason I love low trail bicycles, is that I find their handling more intuitive, particularly when cornering and maneuvering. On a low trail bike, I can take tight corners more confidently and at higher speeds; I can deal better with hairpins and tight alleyways. I also feel more comfortable riding no hands, or with limited hold of the bars. This time, however, I did not feel a pronounced difference in this respect; the bike just did not scream "low trail!" to me.

But as I continued to ride the bike on that and subsequent days, I began to notice that my behaviour on it was different than it used to be on the standard-forked version. Namely, I was multitasking more than previously - taking things out of my pocket, eating (I have a long commute!), checking my phone, removing and putting on articles of clothing. Clearly, I now felt comfortable enough with the amount of control I had over the steering to do all those things, whereas previously I didn't. Having noticed this, I immediately sent an email to one of the guys behind Bella Ciao mentioning it, lest I forget... and I did this while cycling (on a very quiet road, don't try this at home, etc.).

These differences aside, I do not yet have anything else to report. I did not notice any change in speed what so ever. No change in responsiveness or acceleration either. One nice thing about Bella Ciao bicycles is that they feel kind of racy and aggressive despite being utility bikes. The new fork did not diminish that character in any way. I have not yet tried the bike with a front load (ironically, it sports a rear rack that I designed a few years back), but that will happen soon and will no doubt yield a new crop of impressions. 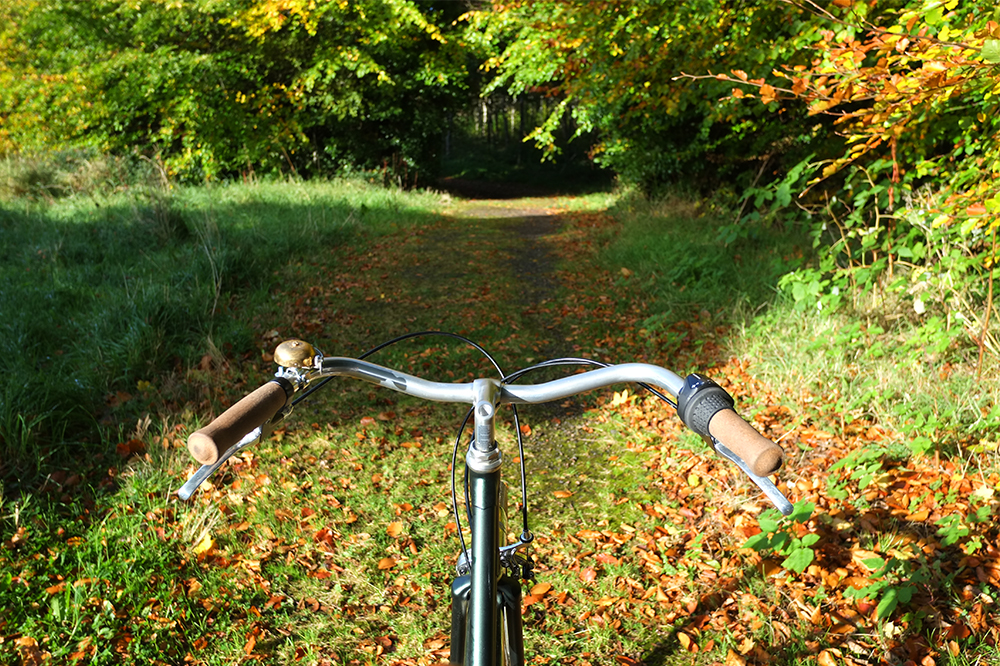 The subject of trail is a rather tricky one to raise. It only serves to needlessly confuse those who don't know or care about it. And it can polarise those who do. Overall I prefer the handling of low trail bicycles, especially when it comes to upright bikes. But there are many who feel differently, and all of our preferences are valid, by virtue of being exactly that - preferences.

Considering my experience so far with Bella Ciao's experimental low trail fork, I can say that (1) I definitely prefer it to the standard fork, and (2) I think that for my personal bike I would prefer for the difference to be even more pronounced - another inch added to the rake wouldn't hurt!

But looking at it objectively, the current version of the low trail fork would certainly be more successful than my extreme ideal, as it is actually subtle enough in its effect on handling to appeal to a wide variety of riders, while offering vibration-dampening benefits that would be universally appreciated. At this stage, my suggestion to Bella Ciao would be to simply use this low trail version as their standard fork and mention nothing special about it. Or why not go all out and offer (albeit perhaps in small print, so as not to freak out the majority of their customers!) a choice of 3 forks: standard, low, and super-low trail. Whether they consider actually implementing this or not, is of course up to them. Either way, it is exciting to be a part of the R&D process of a company that is small, flexible, and - well, a little eccentric. Thanks Bella Ciao, and happy trails!
Labels: Bella Ciao design geometry handling handmade low trail