The Pyramid of Garvagh 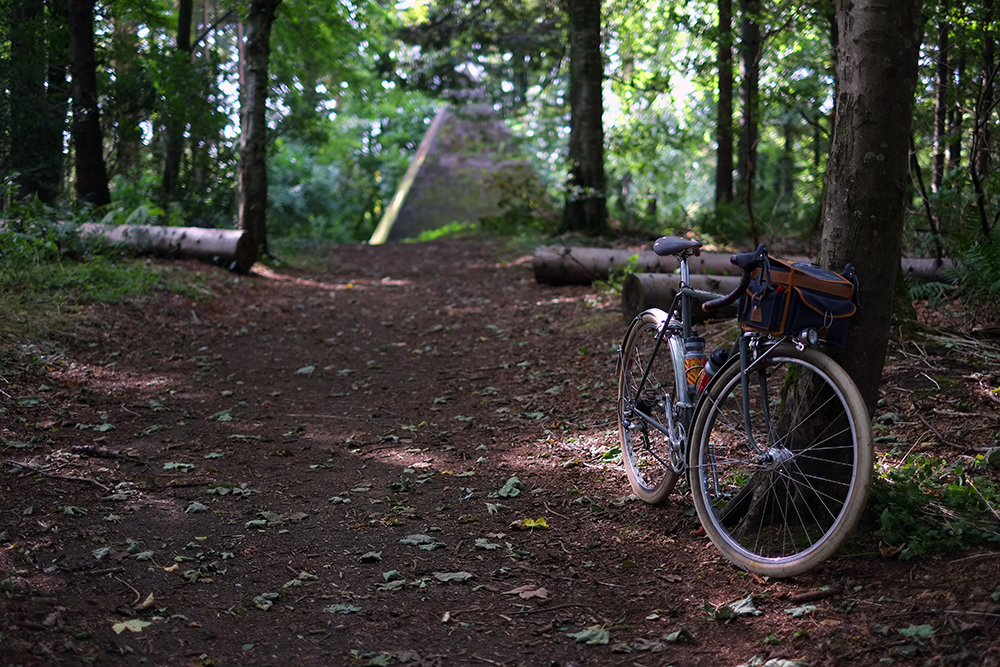 One of my favourite destinations for day rides is the village of Garvagh. Located just over the hill to the south, it makes for a convenient midway point of a metric century ride with some breathtaking views. The first half of the trip involves some sustained climbing, but the lovely descent with panoramic layered mountain vistas more than makes up for it. The village of Garvagh itself is tiny, but interesting. It began as a large private plantation in the 1600's, settled by the Canning family. Gradually it developed a market-town center - essentially one street, which today is lined with shops and cafes housed in attractive old stone buildings. There is also a museum and a handsome clock tower. The original plantation manor has been knocked down to make way for a school some decades ago, and most of the land has been parceled out and developed. A portion, however, has been preserved as public parkland. 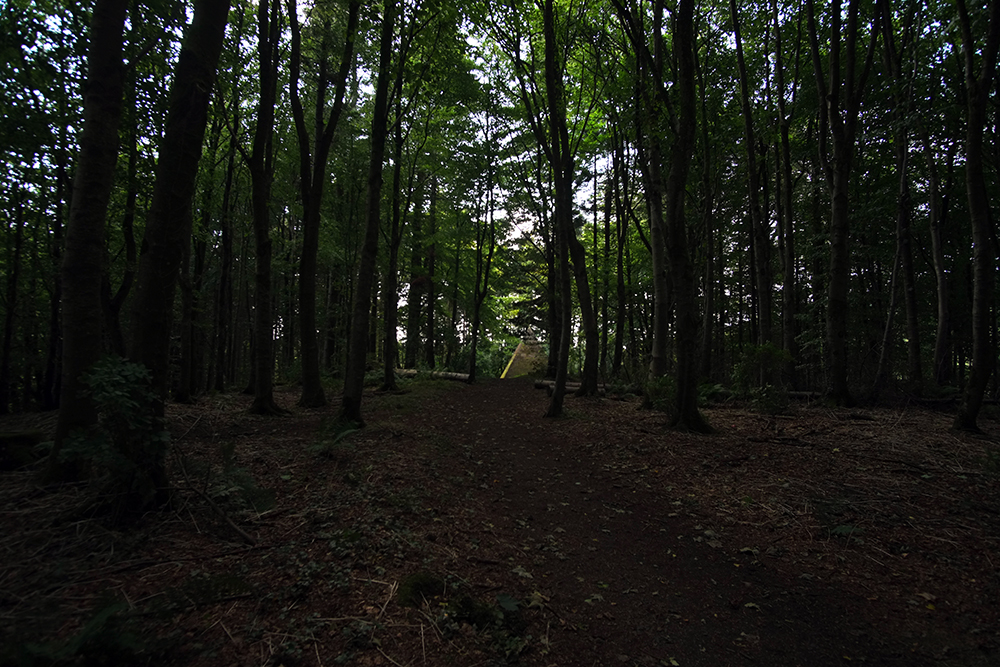 The Garvagh Forest covers 550 acres and offers 7 miles of walking/ cycling trails. Many of these are rough, tight and winding, with sharply pitched flicks, making the forest a popular destination for mountain bikers. And although some of the trails are too technical for me, every time I pass through Garvagh I will usually at least do the easy outer loop through the woods on my roadbike, fat tires or not, enjoying any chance to get some unpaved riding in. 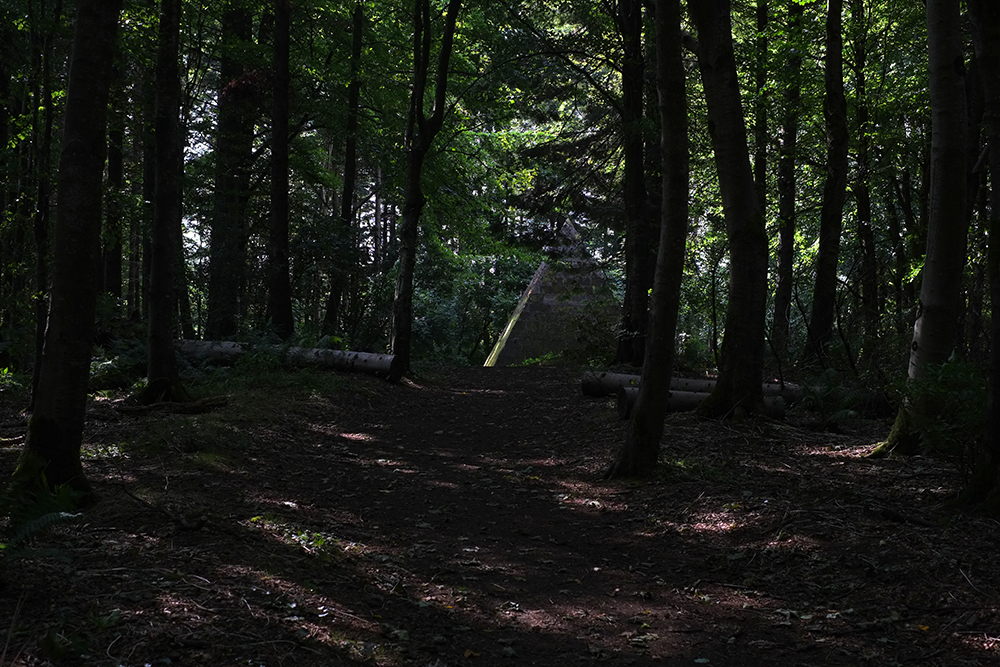 It was in doing this for the first time that I "discovered" it - almost literally stumbling upon it, as I shredded gingerly picked my way through roots and mud. It was the pointed shape of it I noticed first, catching the flickering light that streamed through the tree tops. Curious as to what the structure was, I made my way toward it. 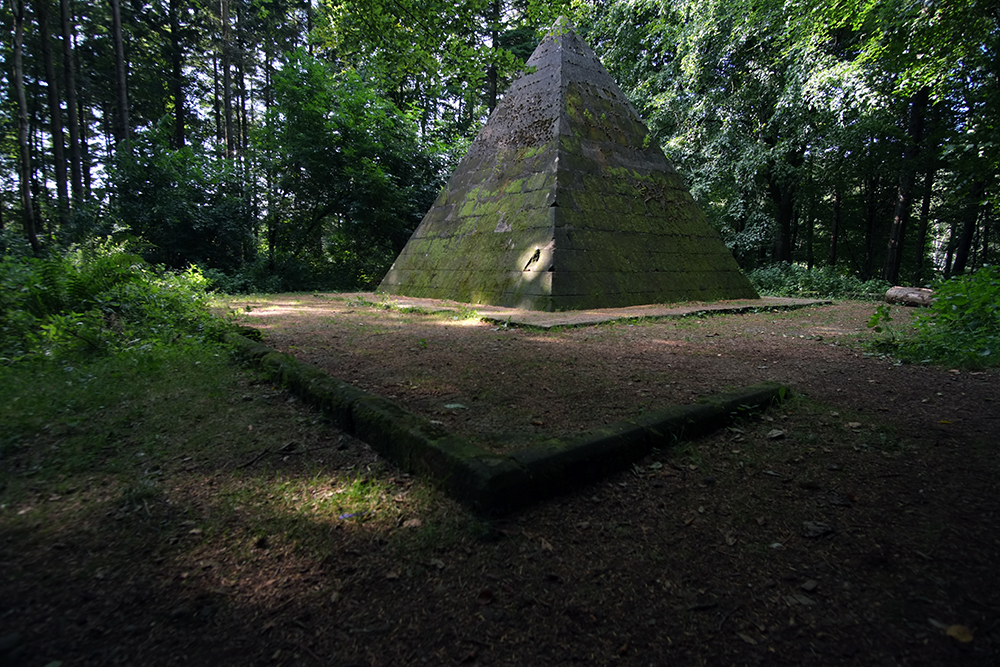 In a clearing atop of a thickly wooded hill, there it stood: a pyramid. Modestly sized and lacking any extravagance of appearance, it was almost inconspicuous in its surroundings. Excepting, of course, for the fact that it was a pyramid. In the middle of an Irish forest! 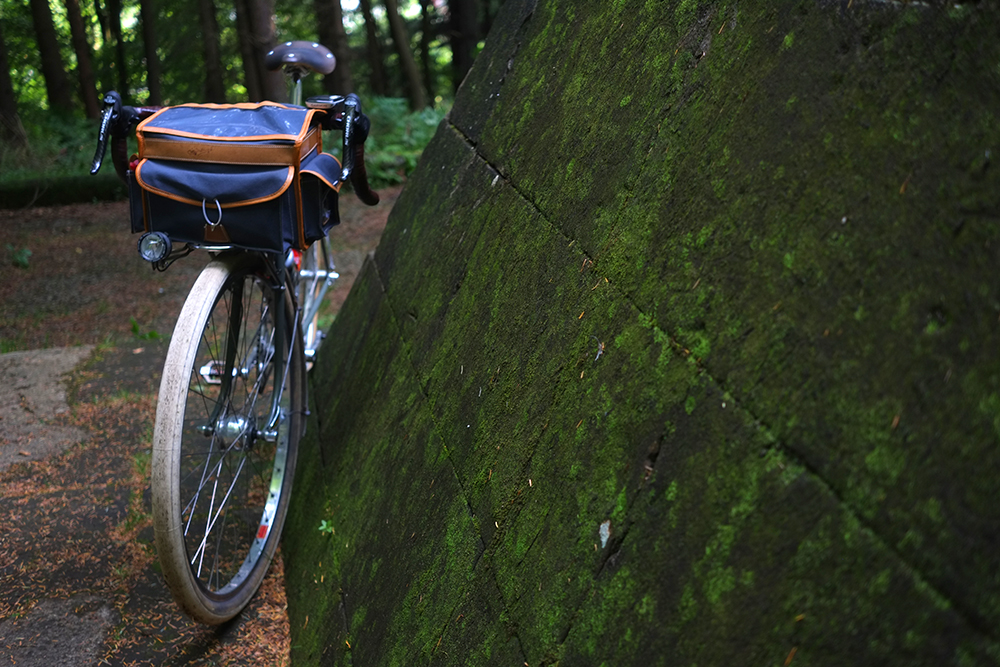 Overgrown by moss and unaccompanied by any sort of plaque offering an explanation of its existence, the pyramid looked oddly native to its environment. It was also invitingly tactile, compelling me to circle it and run my hands along the green-gray mossy brickwork to assure myself of its realness. 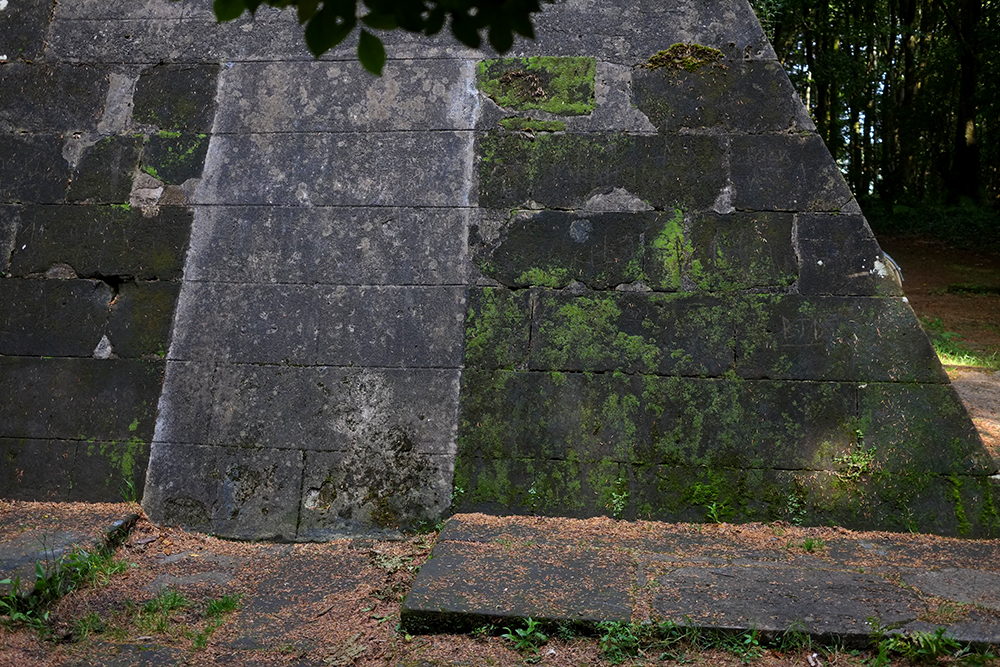 Other than the sealed doorway at the back, and the writing (usually initials) scratched into the moss, no features broke up the structure's uniformity. It was a pyramid, plain and simple: a square base and 4 triangular walls converging at a point. 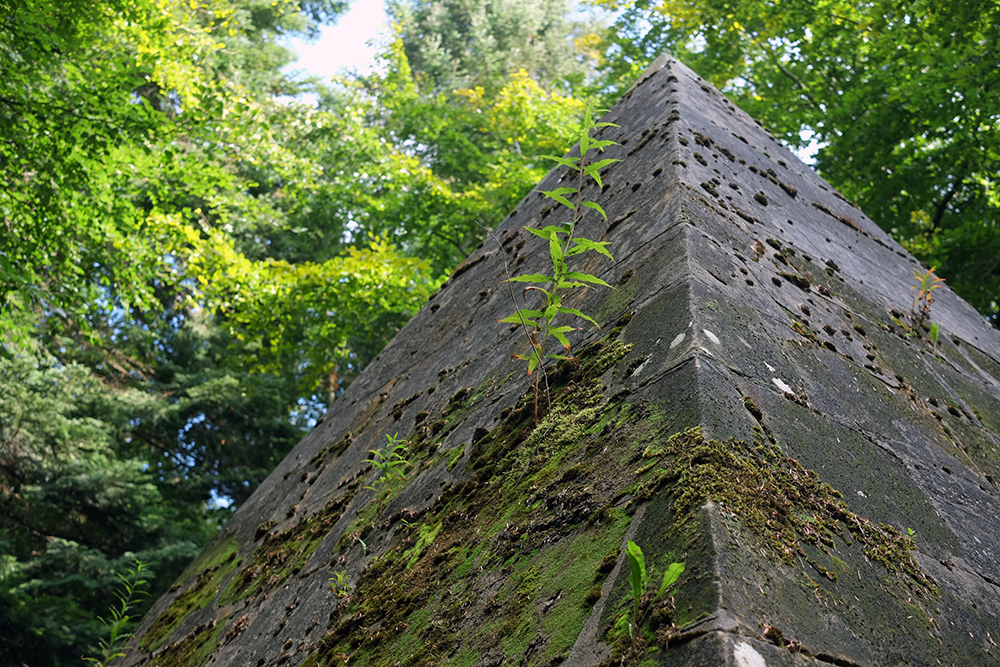 I do not know why it had such a tremendous effect on me. But I found the structure's incongruous presence more than merely intriguing. There was a mystical feel to it, a magnetism - its forest setting and mossy brickwork infused with a meaning that felt just beyond my grasp.

When at length I managed to tear myself away, I raced home eager to learn all about the pyramid. Information, however, was sparse. Far from being promoted as a local feature, its existence was kept rather low key - so that even most of the locals I'd mention it to had no idea there was such a thing on their doorstep. "A pyramid? In a forest? What are you on about!" 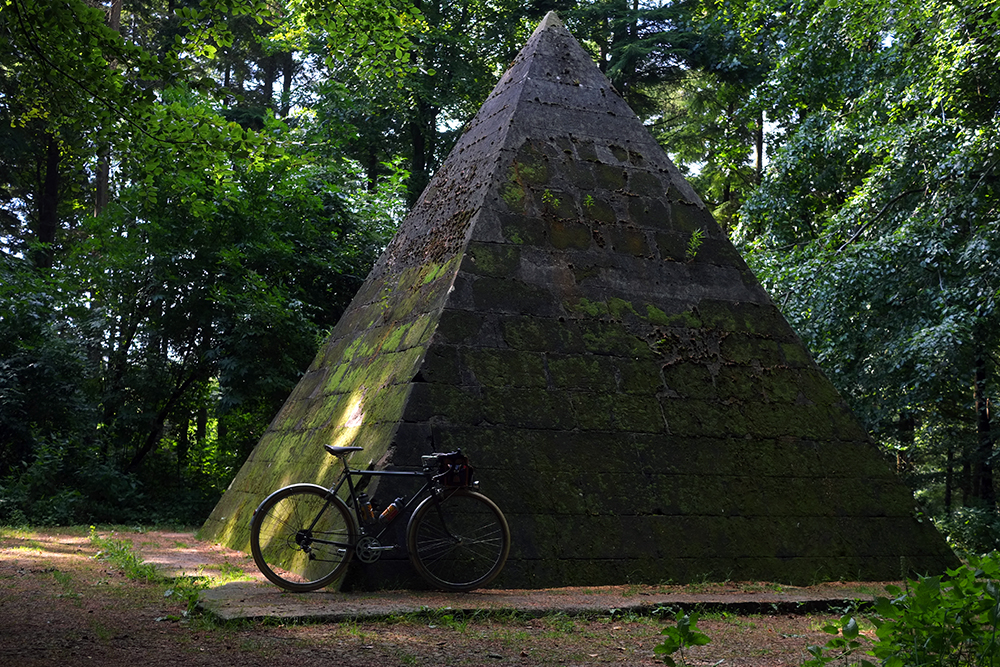 The truth about its origin was rather a let-down. Some time in the 19th century, the then-Lord Garvagh (Baron Leopold Canning, most likely) set off on a Grand Tour of Egypt. So inspired was he by the pyramids there that, upon returning home, he - naturally - commissioned his own. Built of freestone blocks 18 square feet at the base and 21 feet high, I am not sure how the proportions and construction methods compare to its Egyptian models, but Lord Garvagh must have been happy enough. Originally he had intended for the pyramid to be his burial chamber. But as he reached old age, it seems the idea ceased to appealed to him, and he was buried instead in a more conventional manner. Its doorway eventually sealed, the pyramid languished on the Canning property - the structure surviving, it seems only though the sheer luck of the land it stands on ending up as part of preserved public land and not the bit sold off for private development.

There are those who propose a connection between ancient Egypt and Ireland, suggesting links between the two civillisations. Unfortunately the Pyramid of Garvagh is not one of them. Like many other unusual structures around the North Coast, it was built as a folly - an architectural toy - by a wealthy, somewhat eccentric landowner.  Devoid of any special meaning or mysticism, it nonetheless has the power to surprise. Delighting walkers and cyclists who happen upon it, it is particularly striking in May, when it sits upon a carpet of bluebells.
Labels: Alice Ireland stories travel unpaved