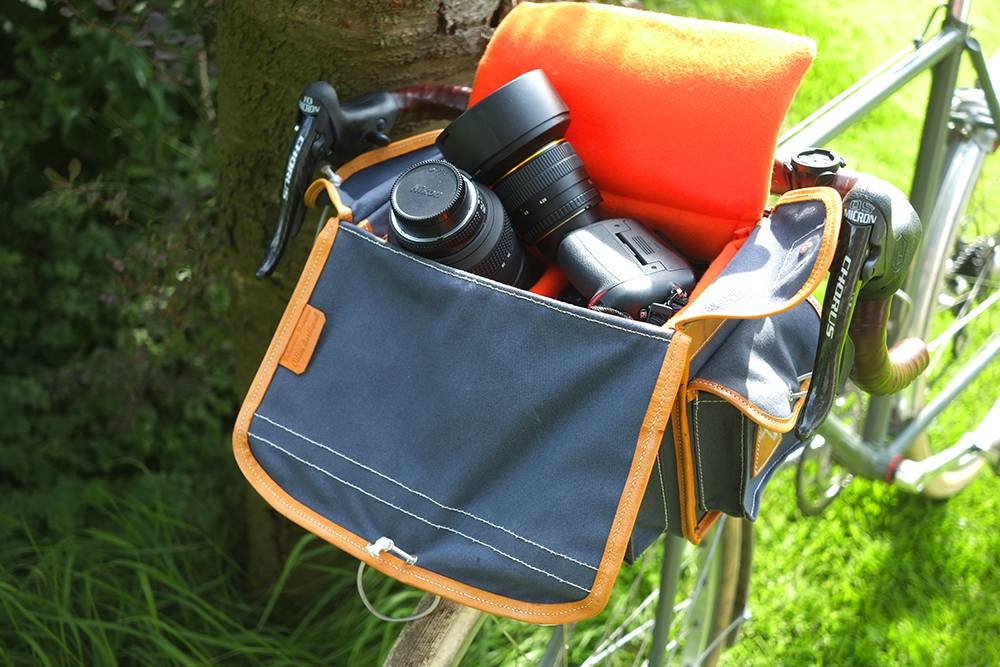 Over the past week I’ve been doing a site photography project that required me to travel with most of my camera equipment. The distance was a bit further than I typically cycle with that much weight, but I enjoyed the challenge. The first couple of times I rode an upright bike with my gear in the front basket and pannier, since that was the only way to fit it all. It had been a particularly windy week, and the combination of the headwind, the couple of daunting inclines along the way, the extra weight, and the upright position left me pretty tired after these 20 mile trips. So on my last day of shooting, which called for fewer pieces of equipment than required at the start, I decided to make things easier on myself and take “Alice” - my DIY roadbike.

This 650B bike with fat tires, fenders and a front rack is equipped with a handlebar bag that, albeit small, is surprisingly roomy. On a recent mini-tour, for instance, I was able to pack everything I needed for an overnight stay into this bag. Now I stuffed it with a DSLR camera body, 3 lenses, a flash unit and a bunch of spare batteries. In total, it was close to 8lb of weight in the front.

Of course, on a beefy utility bike that kind of weight hardly registers. But on a roadbike with super lightweight tubing and fork blades? I was basically carrying a third of the entire machine’s weight in its front bag. Lifting the loaded bike to get it down the small set of steps out my front door, I became aware of how ludicrously front-heavy it was.

Luckily, this little devil of a bicycle carries a front load exceptionally well. The weight neither dulls its responsiveness, nor pulls at the steering; it is simply not noticeable once the bike is in motion and, as far as I can tell, has no effect on handling at all. Its effect on speed, however, has been more difficult to gauge - as I don't exactly try to set speed records when I ride with camera equipment. But at a cruising pace I am not really aware of the extra weight.  And on this occasion, I was still a great deal quicker to arrive than I would have been on an upright bike, with the added bonus that the trip did not feel as tiring.

I did my work and, still full of energy, started to head back home - when I heard someone shout my name from across the road. A friend of mine, in full lycra, was out for an evening spin. And hey, did I want to join him? I explained that I was heading home from a job and my bike was full of camera equipment; I would only slow him down. Nonsense, said he, having already crossed the road to join me and now tracing lines in the air to suggest a route. And so instead of heading home, I found myself on a bonus little road ride - of the "putting the power down" variety.

Admittedly, putting the power down with an extra 8lb over my front wheel required extra effort! Never before had I attempted to do an all-out road ride with my handlebar bag loaded, and this unexpected detour proved exhausting. Still, I tried my best to keep up and to maintain a good pace up inclines, and when we arrived at the crossroads where we’d head our separate ways, my friend gave me a hardy pat on the back. “Hey, you weren't too bad!” To satisfy his curiosity, he then reached out and tried to lift my bike’s front end by the stem - in the process nearly loosing his balance from the unexpected heft of it. The expression on his face was priceless.

Later at home, it occurred to me that I’d had my computer on and could now check my speed. Just how much slower was I going than usual? I had a look and saw that my average was just under 15mph. At my very best effort, I've been able to eek out a 17mph average along this route - albeit on my other, faster roadbike. On Alice, with an empty handlebar bag, I can do 16mph. All things considered, I thought the difference in speed was very acceptable.

Among those of us who go on spirited road rides, there is a tendency to strip down our bicycles to the bare minimum, for fear of bits of extra weight slowing us down. Saddlebags are replaced with the teensiest of saddle wedges, fenders are removed, pumps are swapped for CO2 cartridges. It's a ritual, and, as such, I actually rather enjoy it sometimes. If nothing else, it puts me in the mood to go fast. But psychological effects aside, in practice it's hard to gauge to what extent those shaved grams really matter - particularly when the weight is placed in such a way that it does not effect handling.

While I don't plan to make a habit of doing go-fast rides while carting around camera equipment, it's nice to know that I can. We can all use a bit of weight training now and again, after all!
Labels: Alice bags portage roadcycling