Box vs Superbox - and Other Updates in Bike Shipping 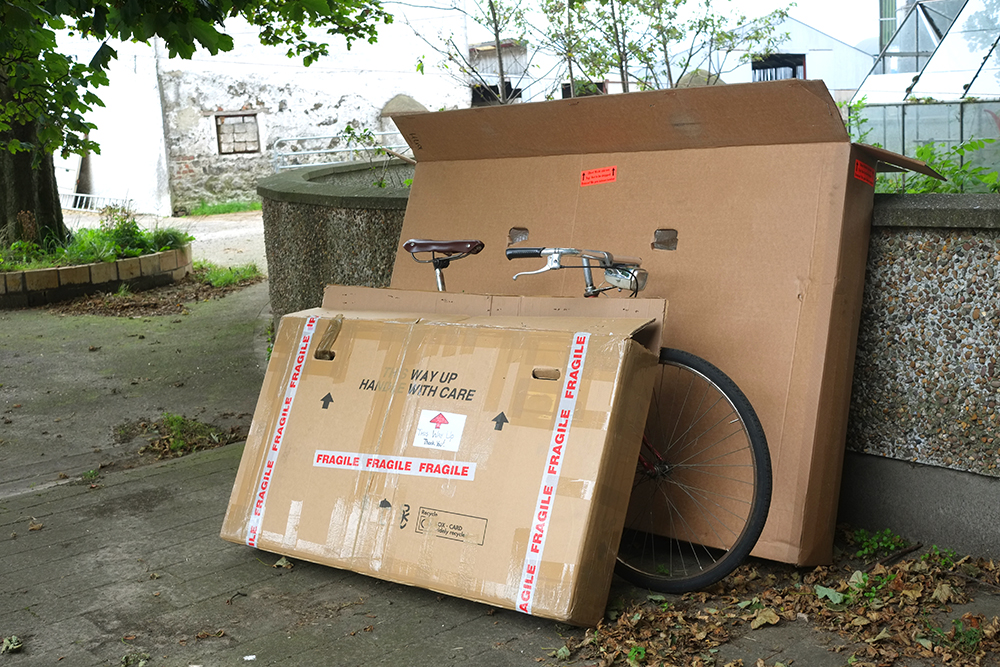 Some time during my last visit to the USA I was talking to a bike shop employee about the difficulties of posting complete bicycles to non-local customers. I mentioned the existence of bike boxes that are large enough to fit an entire, fully assembled upright bicycle of Dutch/utility-sized proportions. He told me such things did not exist - that bike boxes are getting ever-smaller, so that anything but a fully disassembled roadbike is becoming impossible to fit inside them. I insisted that I'd seen with my own eyes the kind of box I was describing, whereupon he led me to the shop's computer and asked me to show him. We tried the search a few different ways, but could not find an example. And while I vowed to get back with proof of my claim, life's relentless current got the better of me and I promptly forgot about this debate. Until yesterday. When the two-fork project I am working on with Germano-Italian manufacturer Bella Ciao arrived at my doorstep in all its glory - in just such a box! For scale, here it is shown with a standard sized bike box in front of it, and an especially large upright city bike sandwiched in between. 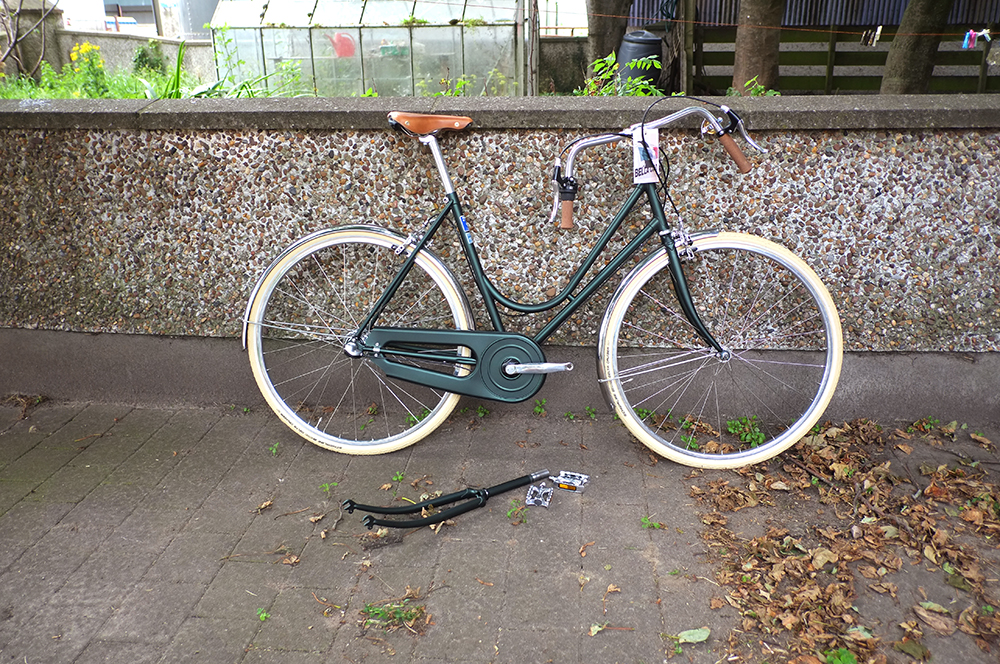 With its generous dimensions, the Superbox can literally swallow a full-sized bicycle whole, so that it emerges ready to ride once the pedals are screwed in, the handlebars flipped and the saddle adjusted - a process that took all of 10 minutes.

The particular box pictured here is approximately 70" by 42" and about a foot deep. It is produced by Wellpappenwerk Lucka in Lucka, Germany. But lest you think the availability of this size is limited to Europe, boxes with similar dimensions are apparently sold by AmTrak for $15. So for bike shops or manufacturers looking to buy in bulk, a North American supplier must exist as well. And individuals looking to ship a bike while minimising disassembly/reassembly, can simply visit a train stations and buy one of these. 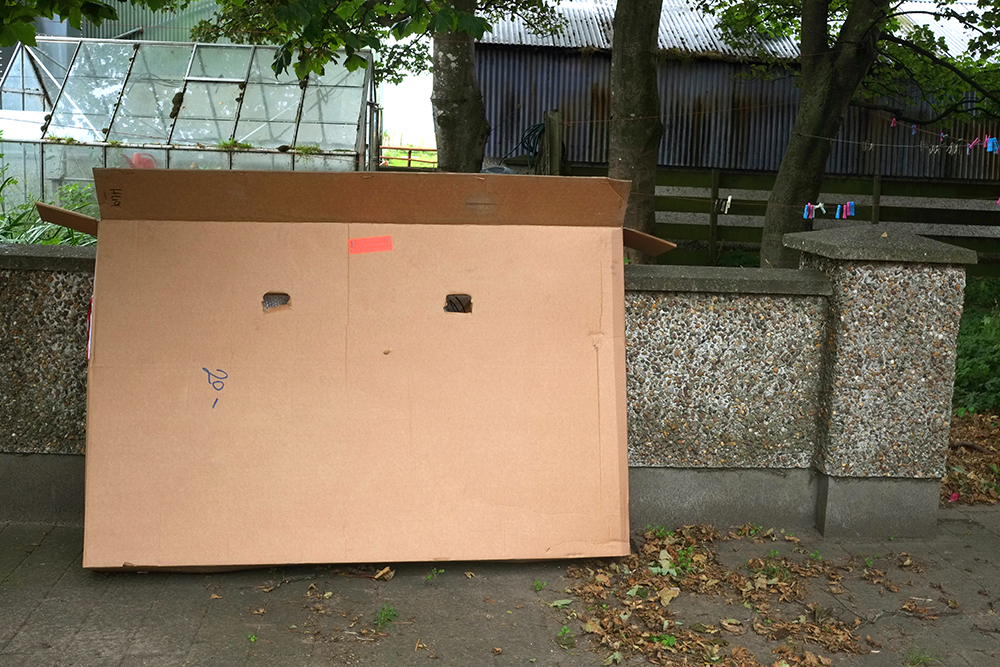 Hypothetically, the availability of such enormous containers makes it convenient to both send and receive fully assembled bicycles. Unfortunately, there is the pesky little fact that postage rates in much of the world have run completely amuck.

Four years ago, I walked into a post office in Vienna, Austria and asked how much it would be to ship my vintage Francesco Moser frame to Boston, USA. The clerk took the frame from my hands and weighed it, then swiftly wrapped the tubes in some brown paper, slapped a postage sticker on, and charged me 14€. "Are you sure it's safe to ship it this way?!" I asked, as taken aback by this method as I was by the low price. "The most safe," he replied. "Everyone sees it's a bicycle." The day after my flight landed, the frame arrived at my doorstep without a scratch (aside, of course, from the dozens of scratches it already had from decades of use).

But things are no longer so simple. A few years back I wrote about the increasing difficulty of shipping bicycles from, to, and within North America. The problems included rising costs, size restrictions, and - perhaps most alarmingly -  the fact that damage in transit was becoming increasingly common. Today, I am sorry to report, the situation has only grown worse. At some point fairly recently, postage rates rose dramatically, so that at present time, to ship a bicycle from the US to Europe costs upward of $300 and often closer to $500, with domestic shipping rates not far behind. This came as a nasty surprise to a few framebuilders and vintage dealers/collectors I know, whose business was hit pretty hard by the change. This is also why, after my move to Ireland, most bicycles I had in Boston were re-distributed to new owners, with the ones I truly wanted to keep gradually smuggled in bike bags on flights. Shipping them over was simply out of the question.

More depressingly though, if I am to go on anecdotal evidence, it seems that damage in transit is becoming not only common but almost the norm. The last bicycle I sold non-locally arrived to the buyer with a gaping hole in the box and half the accessories missing - despite having been professionally packed and shipped by a bike shop. A friend of mine, who used to "flip" vintage bikes on a regular basis, informs me that his last 4 sales in a row suffered some form of damage in transit. 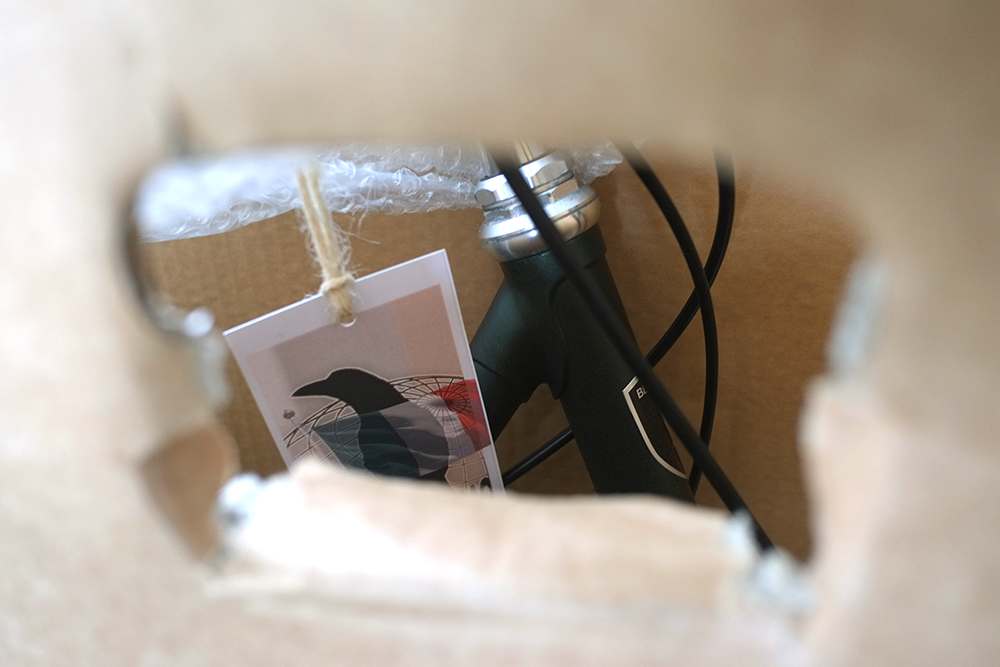 In Europe, things seem a bit better. Within the EU, you can get a bicycle frame shipped for under $50 and a complete bike for under $100. Stories of damage are comparatively rare, too. It makes me wonder: Is it only a matter of time until things here catch up to the way they are in North America? or is there something inherent to the postage process here that makes it less costly and less prone to damage?

Either way, for those planning to either ship or receive a bicycle in the near future I will re-iterate two pieces of advice from my earlier post: (1) insure the shipment, and (2) go through a bike shop if possible, as the involvement of professionals - on both the packing/shipping and the receiving end - will make it more likely for the case to go in your favour in the event of a dispute with the shipping company over damage.

And of course, better yet: Try to buy, and sell local. It may seem like you can get a better deal by casting your net wider. But, Superbox or not, nothing beats the peace of mind and gratification of an in-person sale or purchase. You might even make a new bikey friend!
Labels: shipping