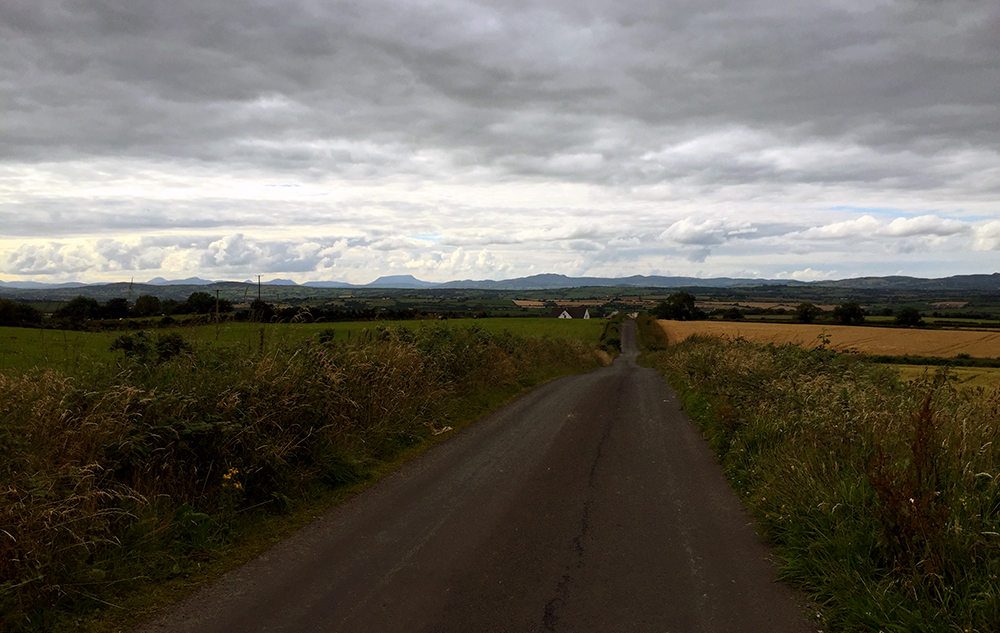 I do not subscribe to the notion of "earning" things on the bike. You know - like the idea that you earn a descent by climbing, or you earn a cafe stop by doing a strenuous club ride. Sure it can be rewarding to experience sensual luxuries after bouts of effortful pedaling. But framing things in this way implies there are aspects of cycling that are a chore, only to be done for a reward. I prefer to think of every part of the pedaling experience as rewarding in its own right. There is beauty and pleasure to be gleaned from climbing, even without a breathtaking view at the top. There is satisfaction in pushing against a headwind even without the anticipation of a good hot meal after. That is just my way of thinking. And it has kept me in love with cycling through thick and thin.

Nevertheless... There are times when the cycling gods throw a curveball and even my zennish approach proves insufficient to put a positive spin on things.

I had plotted a route that began in the city of Derry and meandered along quiet back roads of County Donegal just over the border. It was a route I had already done on my own and found nice enough - one small mountain to cross, but nothing too difficult. However on the day I'd first tried it, a fog had set in, obscuring the views of the Foyle and Swilly valleys I had expected to see and making the ride rather bland. So when my Companion expressed an interest in joining me on a repeat attempt one clear afternoon, I took him up on the offer.

"Hmm those look like some tiny wee roads in the middle of nowhere!" he said, having glanced at my map before we set off.

We rode along the scenic bicycle trail on the river Foyle as it led us across the border, then pedaled past flowering fields and through the village of Carrigans, where we stopped for provisions. Finally we were on the sort of empty, endless, lonesome-looking country roads where a dwelling is not to be seen for miles. A couple of sharp turns, and the mountain was upon us, panoramic views awaiting at the top.

We began to climb, the tarmac - the consistency of chipseal at the best of times - feeling rough and loose beneath our narrow tires. It was a tight, narrow climb, of the sort where the lane twists and you do not know what's around the bend until you are there. But more often than not, what awaits you around the bend is an ever-steepening pitch, the gray crumply road, nearly vertical, resembling a castle wall to be scaled.

But the climb was finite. And the pitch, in our lowest gears, was manageable. And with each bend we came around, we knew that we were getting nearer to the top.

It did worry me slightly that I did not recognise my surroundings from having done the same route earlier. I have a very strong visual memory, and usually a sense of familiarity will accompany a climb I'd done before - as if the strain in my legs and the switching of gears become affixed to certain markers in the landscape that I later come to recognise. This time no such recognition was happening. But these mountain backroads can be bland and unmemorable. And besides the last time I was here in a fog.

Somewhere in the distance I could hear the barking of dogs, which surely meant there were farms nearby. Maybe seeing them would jog my memory.

But around the next bend was a scene that I definitely did not recall from my previous journey. Here some half dozen houses were scattered along a near-vertical stretch of the road, separated from one another by what looked to be scrapyards. Surrounded by tall chainlink fences, their rusty gates opened onto the road.

It was then that two realisations hit me simultaneously. First, that whatever this place was, we were not supposed to be there. And second, that the sounds of the barking dogs had been coming from here. And they weren't harmless farm dogs.

No sooner did this thought enter my mind than I saw the unmistakable figures of rottweilers. Entire flocks of them, like crows, were emerging from the depths of the scrap yards, and, practically choking on their own bark and foam, rushing toward the open gates. And that was when the atmosphere of the ride changed from that of a relaxed meander to an all out "fight or flight" adrenaline fest.

Externally, I managed to stay matter-of-fact just long enough to warn my companion some paces behind me - Much in the way I would yell "Car up!" I now yelled "Dooooogs!" while keeping my line of travel steady.

And then it was as if someone had attached a motor to my saddle. Switching into a higher, then again higher, gear, and without any sensation of pain or even strain in my legs, I pedaled up that mountain so fast the blood began to drain out of my head - the sounds of crazed barking, of a mad rattling of chains, and of hefty violent dog bodies being flung against rusty chainlinks spurring me onward.

Faintly I could hear a voice behind me shouting something about the dogs being chained, or trained. "Pay them dogs no heed, only don't stop!"

As if there was any danger of my stopping. I could see plainly that not all of the dogs were chained. And while it's true that something - either training or an invisible fence - must have been holding them back from attacking - it would only take one rottweiler free of such constraints to do serious damage. Nothing has ever encouraged me to cycle up a hill "at pace" faster and with more enthusiasm than this thought, accompanied by glimpses of the creatures' twitching jaws in my peripheral vision.

In this manner I pedaled and pedaled and did not stop, until I'd gone well past the nightmarish little settlement and even the barking itself was no longer audible. Only then did I finally take a breather and turn around.

Some distance behind, my companion was grinding his way up the incline, red in the face from strain and from laughing. "By god, you took off up that hill like a rocket!"

Recovering from escaping the dogs and from being laughed at, I busied myself with studying my GPS map. It was then I discovered we had somehow managed to go off course. Somewhere near the base of the mountain we missed a left turn and were now climbing it a different way than planned (naturally, a longer and steeper way!). The business with the dogs had distracted me from noticing this sooner, and now we were quite a ways up the hill in the wrong direction.

"Sure we'll just retrace our steps then?"

My genuine moment of panic was met with the sort of laughter that might be unique to Irish men, for whom teasing women is a form of sport.

We continued pedaling to the top, planning to then descend the mountain and navigate back to a familiar point on the route. I had finally calmed down and was capable of chatting again, and we speculated on the nature of that strange settlement we had stumbled into. A travelers' camp? A "provos" hideout? Our imaginations grew fruitful.

Then at length we reached the peak. And when we saw over the crest, we fell silent. In front of us was a view stunning not just in its beauty but in its sheer unexpectedness. It was not the Foyle and Swilly valleys, but an altogether more distant view: We were looking at the west coast of Donegal, its entire Derryveagh mountain range spread out before us, as if delivered on a platter like some peace offering. There stood the daunting Muckish, with its unmistakeable flat-top shape. And there stood the pointy Errigal, its characteristic strips of quartz near the peak giving it an Alpine, snow-capped appearance. We had not realised we'd get high enough, or close enough, to glimpse this lovely, iconic mountain range in the course of this journey. But the "wrong" road up the mountain led us straight to it.

For some time we stood there - just gazing at the view, nothing else, letting the glory and the vastness of it permeate us before leaving it behind with the inevitable descent. The surprise reveal felt like a well-earned reward. And for once I was okay with thinking of it that way.
Labels: Ireland psychology roadcycling stories