A Look at the HOY Vulpine Performance Range 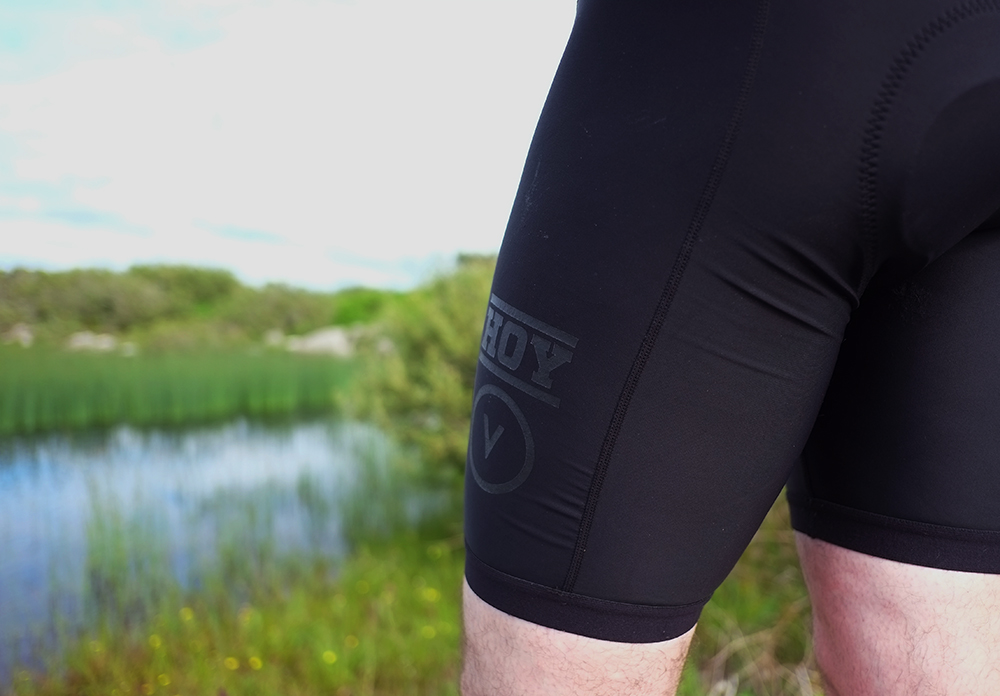 Ever since their launch in 2012, I have been a fan of the small British cycling apparel company Vulpine. But when they teamed up with olympic cyclist Chris Hoy to start the HOY Vulpine range earlier this year, to be honest the news did not really turn my head. I'm into Vulpine because I am into wool, quality, and good tailoring - not so much "collabos" with superstar racers. So the venture only really came up on my radar when gentlemen readers from the UK began emailing me to ask for a review. It was then I finally had a look at the attractive and surprisingly economical (made even more so by the massive sale currently on) HOY Vulpine range. And while a women's line was released simultaneously with the men's, since the inquiries I've been getting were coming exclusively from men, I tasked my in-house male model with putting it through the ringer - which he has dutifully done for about a month now. 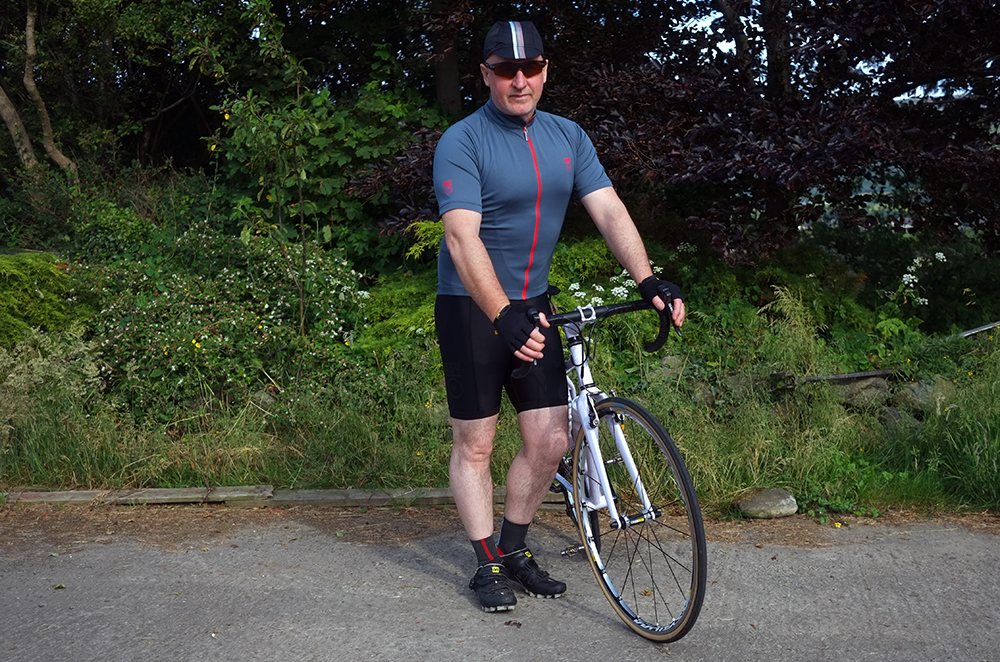 As far as the overall design, the HOY Vulpine Performance Collection (there is also a Casual range) looks and feels decidedly less eccentric than the pure-Vulpine offerings. The sleek El Toro bib shorts and lightweight Valldemossa race jersey follow fairly traditional roadcycling design parameters, with no functional deviations from what you are likely to find in so-called "normal" race or club fit cycling kit. 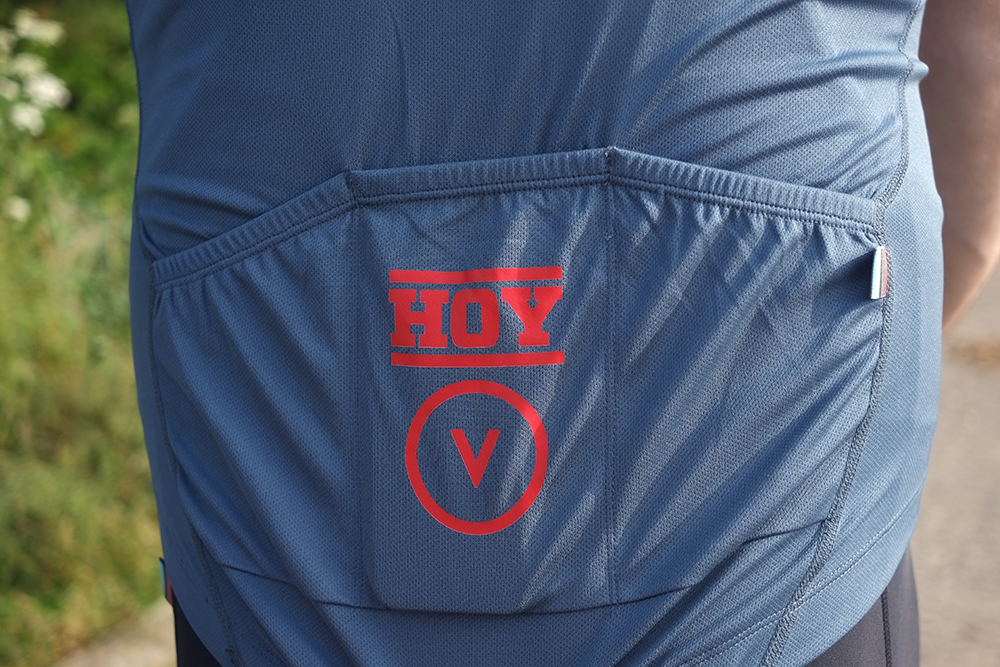 Whereas Vulpine apparel is liable to surprise you with buttons instead of zippers, unusually shaped pockets, and all manner of hidden quirky doo-hickeys, the HOY Vulpine kit is far more "normal," for lack of a better word, with prototypical road racing features. 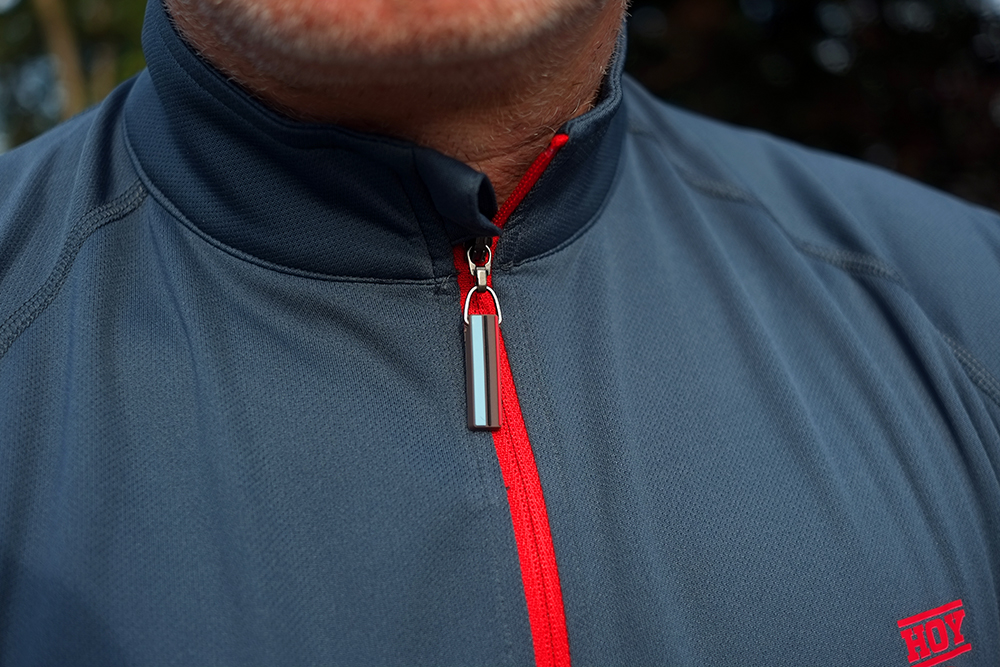 Nonetheless, it is not without flair. The colour schemes - rich slate blues and charcoal grays with unexpected pops of red - makes it look quite lovely and "smart." The branding logos are visible, but tastefully incorporated into the overall aesthetics. And the contrasting stripey emblem that pops up in the zipper-pull and other details, adds an unexpected bit of visual ad tactile interest. The result is a cycling kit that looks tastefully minimal without coming across as stark or boring. And as with all Vulpine clothing there are no scratchy labels or irritating seams; the garments are streamlined and comfortable on the body. 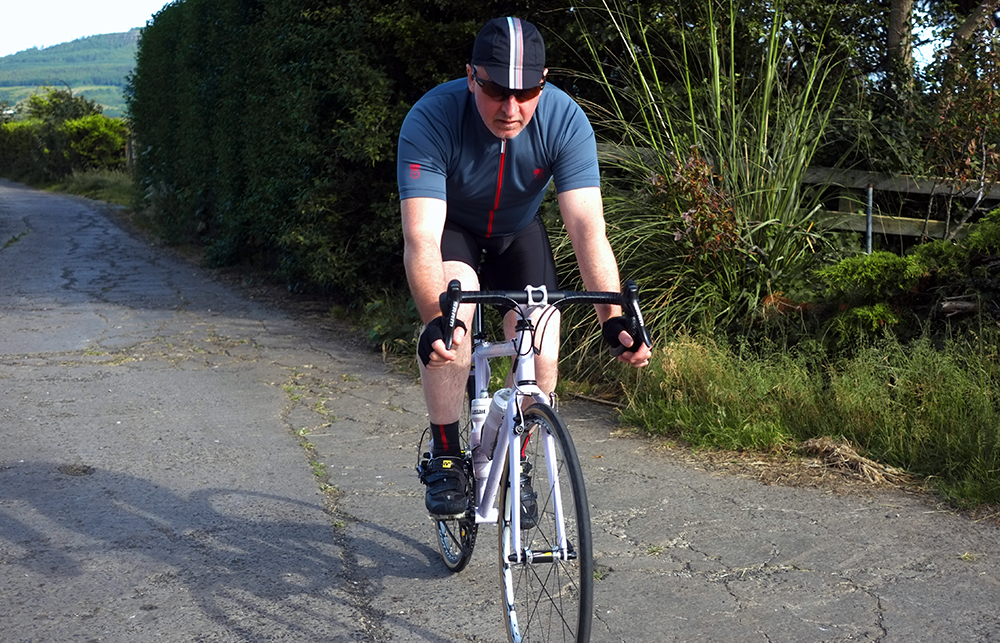 I would describe the fit of the HOY Vulpine Performance Collection as optimised for big guys. And I don't mean big as in out of shape. The shorts and jersey are quite form fitting and will not disguise rolls of tummy fat. What I mean is: big arms, big legs, broad-shoulders kind of big - the body type of a sprinter like Sir Hoy himself, or else of a muscular, broad-backed kind of guy whose physique just does not fit the scrawny-armed "cyclist" stereotype. 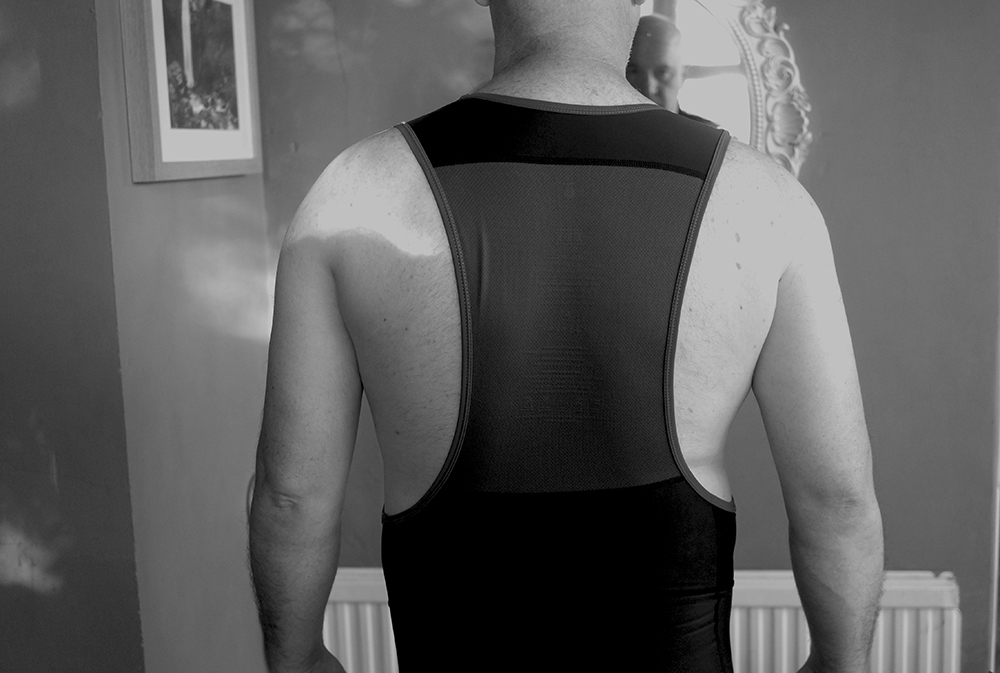 My model, for instance, finds it difficult to find cycling jerseys where the shoulders do not burst at the seams in the drops position and the sleeve openings actually fit around his biceps without swathes of fabric fluttering in the wind around his torso. Likewise, he has trouble finding cycling shorts that go around his legs without being uncomfortably loose around the hips and crotch. The HOY Vulpine kit is one of the very few he has tried that actually fit him properly. 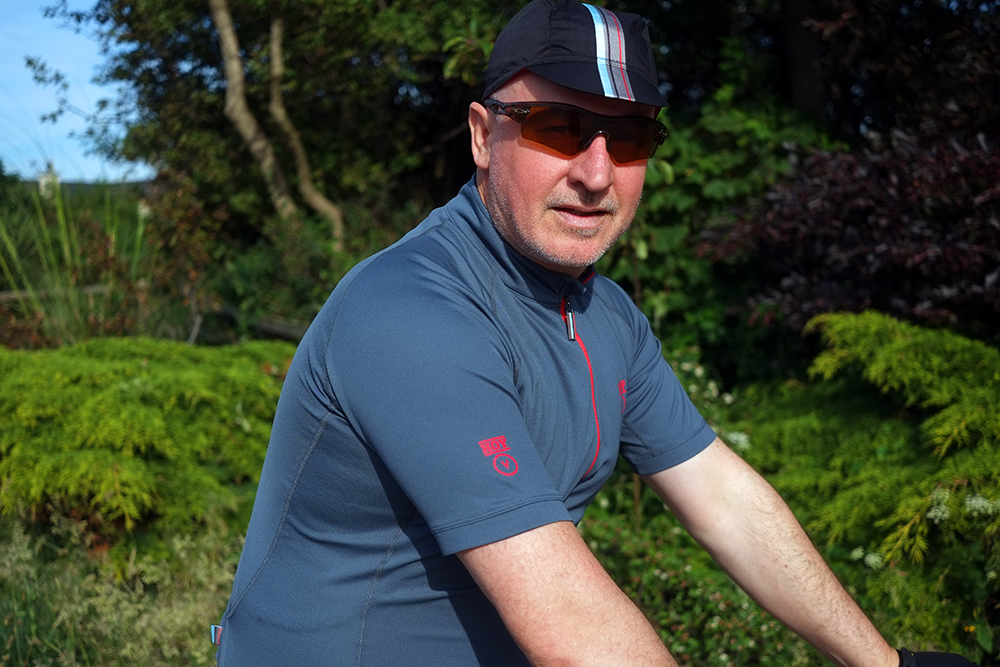 Why, there is even a bit of looseness around the sleeves when he is not in the cycling position!

Both the jersey sleeves and shorts legs are on the long side, which is convenient for our rather cool "summer," as well as flattering. The perforated fabric of the full-zip jersey is silky-soft and drapes exceptionally well. It is also described as fast drying, temperature regulating and UV-resistant - made apparently with an "S.Cafe yarn" produced from coffee grounds. The bib shorts feature a mesh upper, non-irritating round grippers, and a CyTech pad that my model reports as very comfortable for distances of up to 50-odd miles.

All that being said, there is one other feature of the El Toro shorts that I am reluctant to bring up, as I am not sure how to say this tastefully... But okay, since this is a review say it I must: Compared to other cycling shorts, these bibs seem to have a bit of a "wonder-bra" effect on my model's front-end geometry (if you know what I mean!), accentuating it to a degree where it's impossible not to notice. So, gentlemen... whether you consider that a fantastic feature, or a mortifying one, is up to you. Just be aware that you may experience some "Hey, my eyes are up here!" moments whilst wearing the HOY Vulpine shorts. 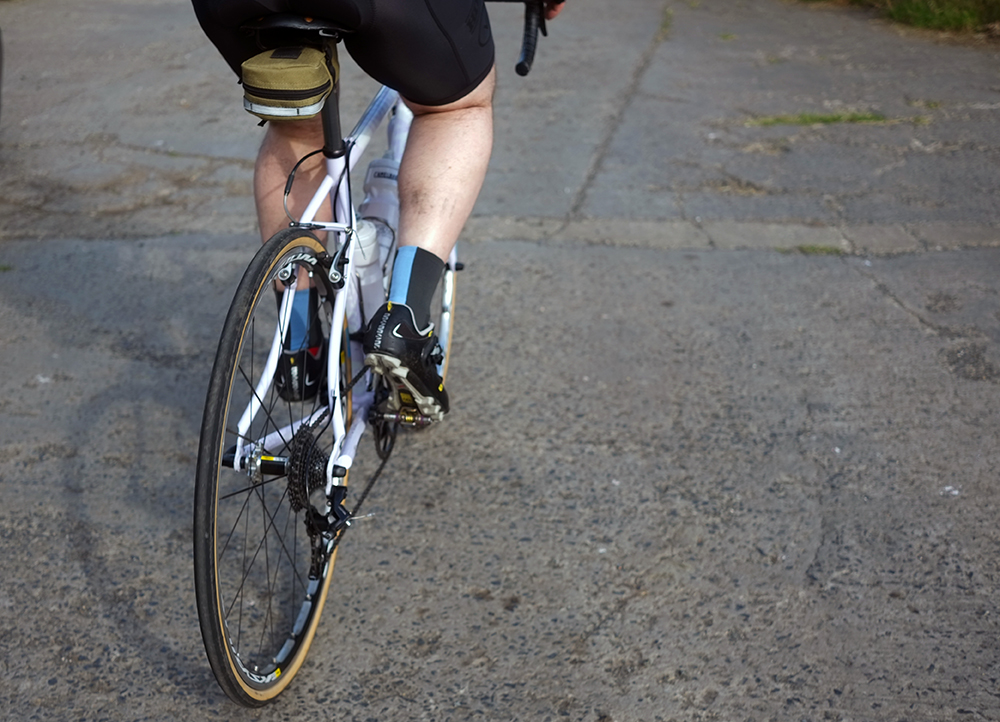 Swiftly moving on to the accessories! The HOY Vulpine Performance range includes some pretty  "Sprint" socks, which, my model reports, not only make him sprint faster but stay dry and non-smelly longer than ordinary socks. 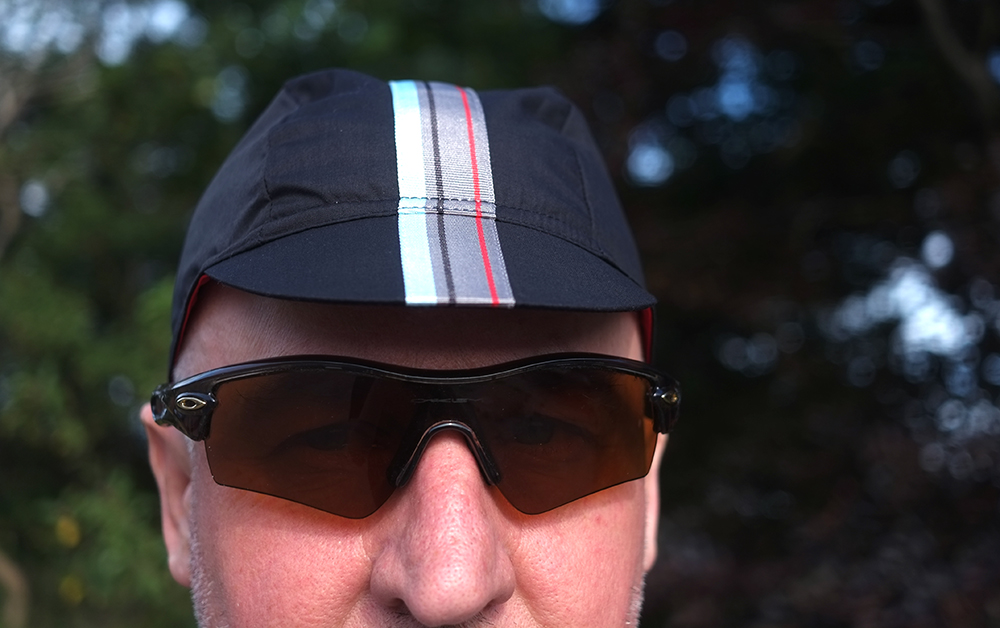 The simple and elegant cotton Trackside cap (available in the colors shown here, or gold!) features a flattering 3-panel construction and does all the things a cycling cap is meant to do with aplomb. When it comes to accessories, my model also notes that a set of arm and leg warmers might also be nice, in light of the Irish Summer! 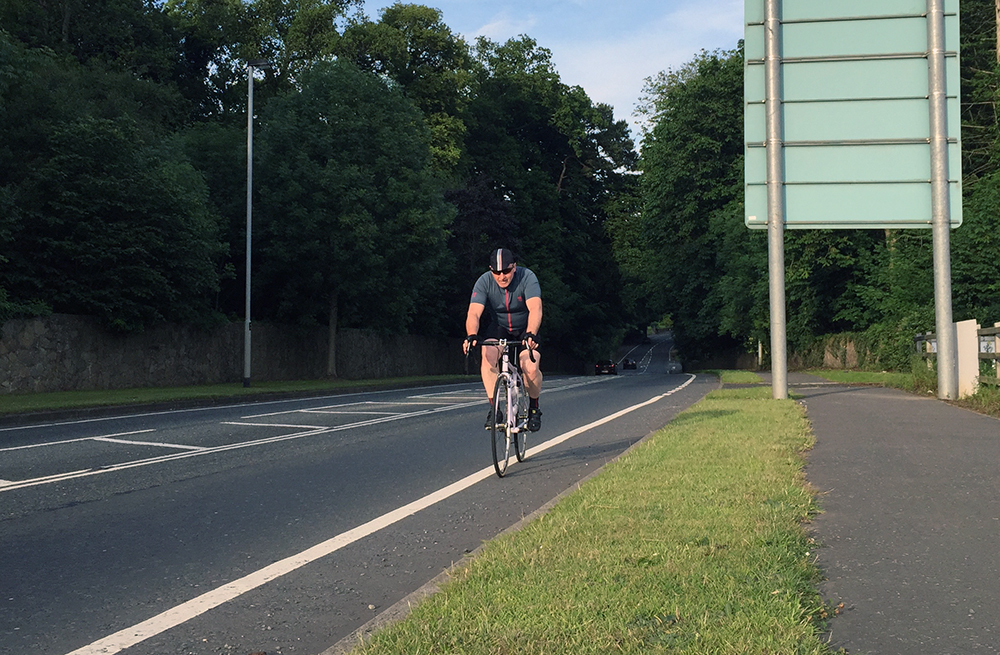 To summarise, the HOY Vulpine cycling kit for men is a performance-oriented, sporty, attractive, lightweight, and somewhat de-quirkified yet no less comfortable cousin of all that is Vulpine itself. At the moment, it also happens to be a downright bargain as far as quality cycling apparel goes, with the shorts on sale for £40, the jersey for £35, and the socks and cap for £6 each (both the men's and women's lines are on sale, while supplies last, prices are temporary, etc.).

With thanks to HOY Vulpine for the opportunity to review their new range, I wish them the best of luck and look forward to seeing how things develop in future.
Labels: product reviews Vulpine