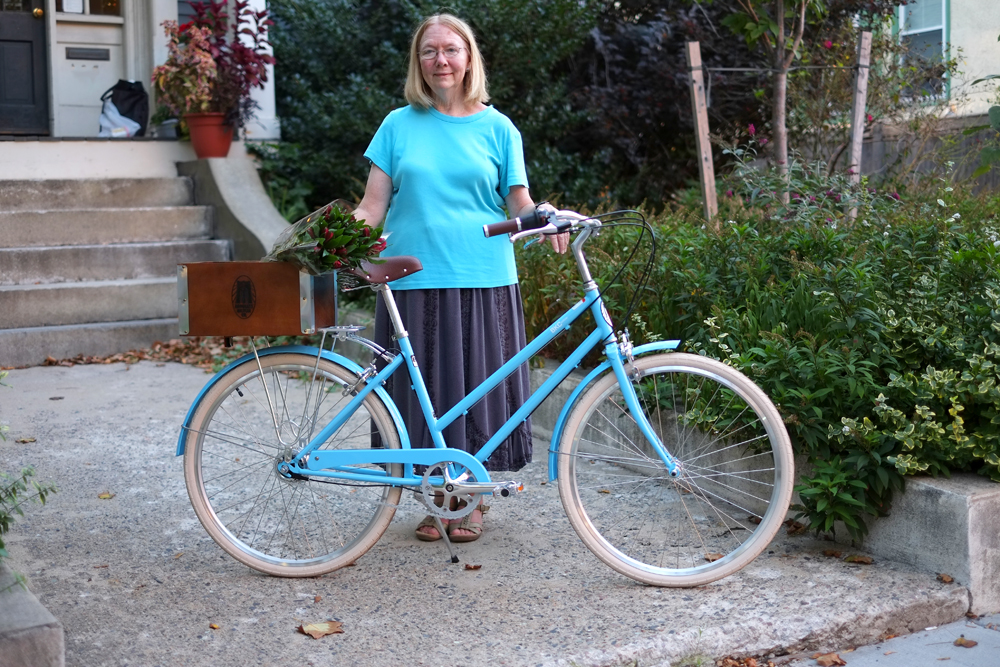 In a funny roundabout sort of way, I was reminded of Brooklyn Bicycle Co. this morning whilst browsing the website of a Scandinavian bicycle manufacturer, one of whose models happens to be named Brooklyn. This was not the first European brand I have recently come across using American references in their product descriptions. And it made me think of how funny it is that the trend goes both ways now. For the past 6-7 years, American companies have been naming their bicycles after Amsterdam and Copenhagen to suggest certain European characteristics. Now European companies are using references to places like Portland and NYC to suggest... what exactly? I had to think about that for a bit. Perhaps a more casual aesthetic, pared-down build, nimbler handling, brighter colour palette? As I thought of this combination of features, the image of a bicycle came to mind - made, as it happened, by a company that is not only named after Brooklyn but is actually based there. Since having met them at Interbike some years back, I have tried Brooklyn Bicycle Co. bikes a number of times, yet have neglected to write about them. Today this fact I shall remedy. 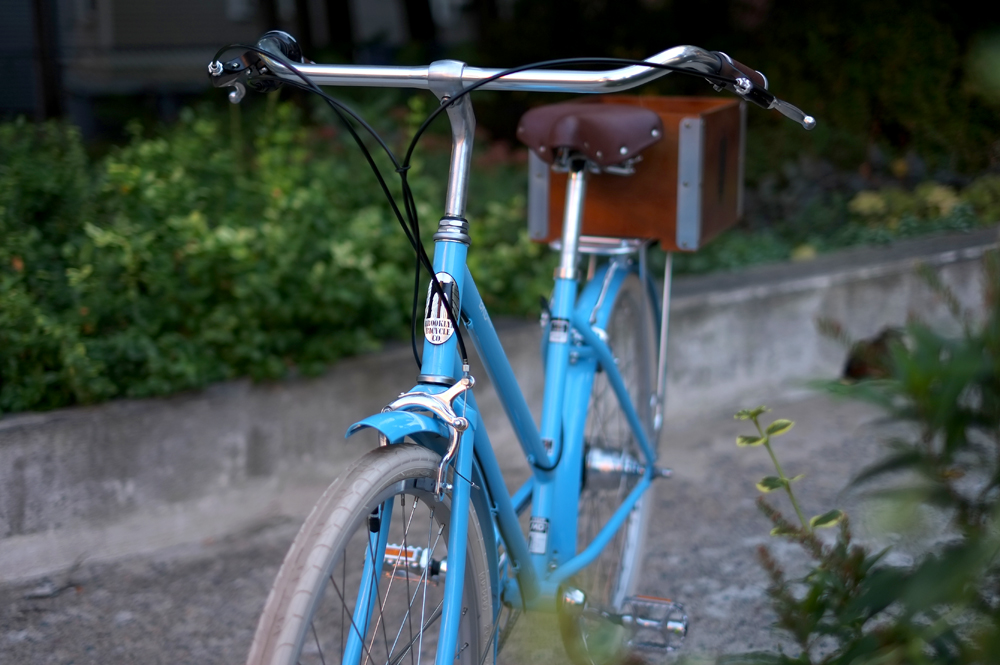 Here is something I find interesting about Brooklyn Bicycle Co. machines. At first glance, they are nice, moderately priced bicycles with decent components that are basically updated versions of the classic 3-speed. Yet while other bikes of similar aesthetic, build and price tend to polarise opinions (on both value and ride quality), the Brooklyn Bicycle Co. bikes seem to evoke mostly approving, or at worst neutral reactions. Can it be that they've hit upon a sweet spot of sorts? Based on my test rides of several Willow and Franklin models, I admit that I can see the appeal. 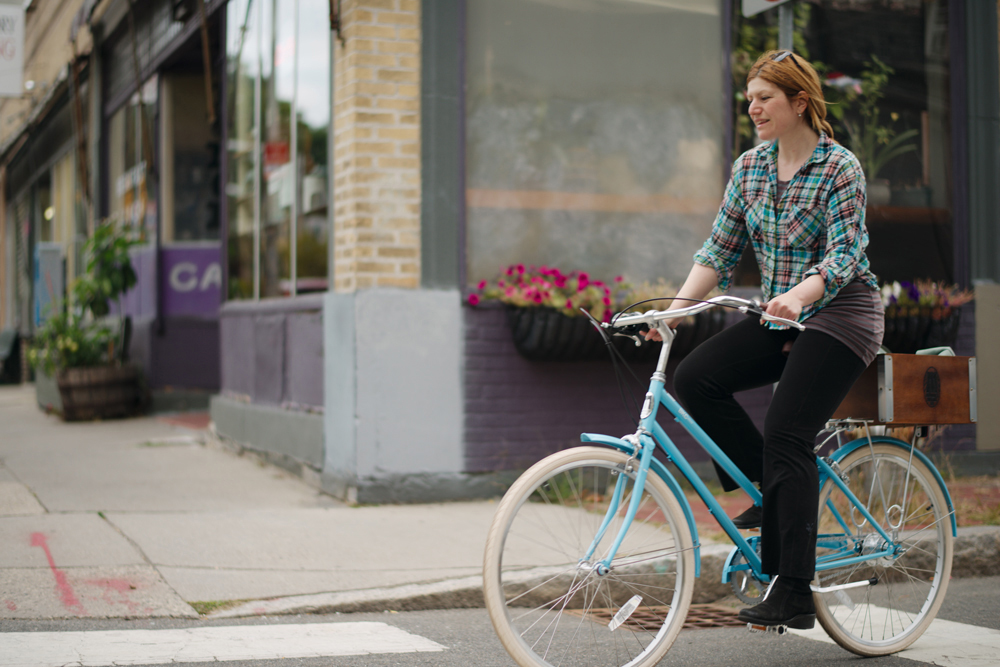 My favourite aspects of the Willow and Franklin step-through models (geometrically identical, except in that the Willow is built for hub gearing and the Franklin for derailleur), is their ride quality. In fact this aspect of the bicycle comes more readily to my mind than details of its construction or even its overall look. The $599 Willow "feels" like a more expensive bicycle to ride. Its ride quality over bad roads is excellent, handling is delightfully stable, responsiveness to pedaling effort is immediately apparent, components seem solid and rattle-free. In many ways, it reminds me of a smaller (obviously), nimbler, version of the Xtracycle Radish (which I looooved, oh my god did I love it). This is not surprising - as both the Willow and the Radish were designed with input from Grant Petersen of Rivendell Bicycles (whose true calling obviously lies in city/transport bike design!) and share some similar build characteristics - 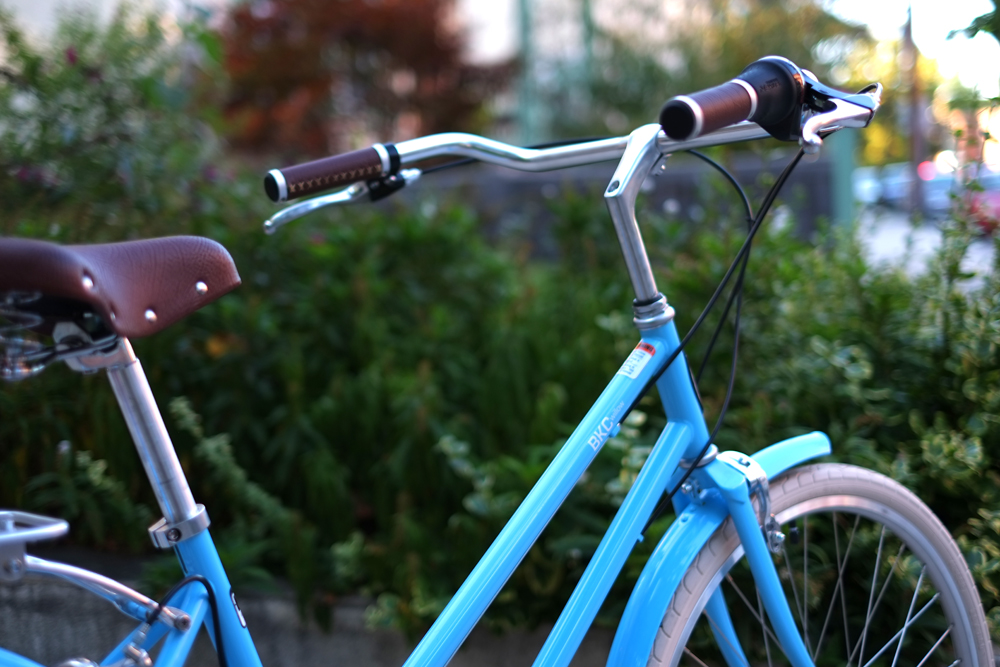 including the low bottom bracket, long chainstays, mid-highish trail front end, semi-relaxed angles (71° head and seat tube), generous "cockpit" and wide, swept-back handlebars - resulting in a rider position that is at the same time leaned forward and open, at once active and relaxed. 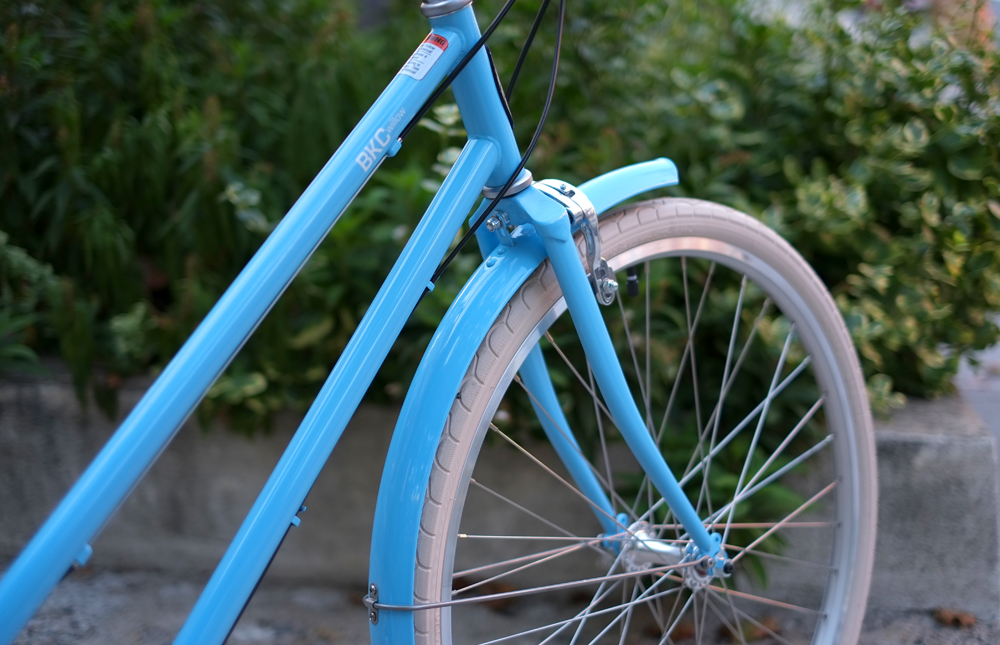 The cro-moly steel frames (built in Taiwan and China) are tidily welded, with cast crown forks on the Willow frames and unicrown forks on the Franklins. The framesets are built around either 700C or 26" wheels, depending on sizing, ensuring a nice proportional fit (and reducing chances of toe overlap with the front wheel). 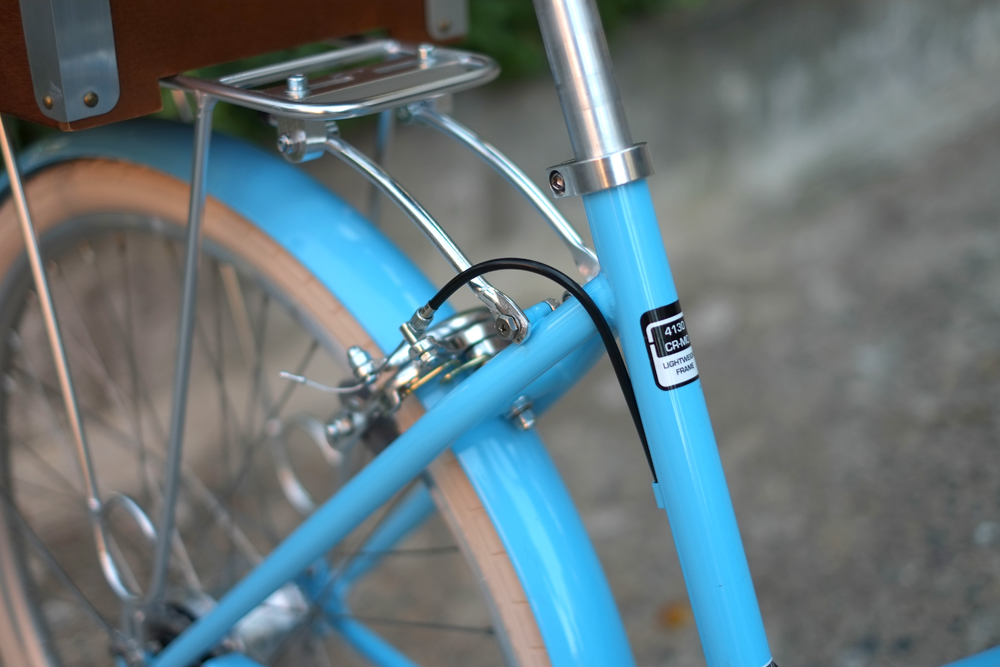 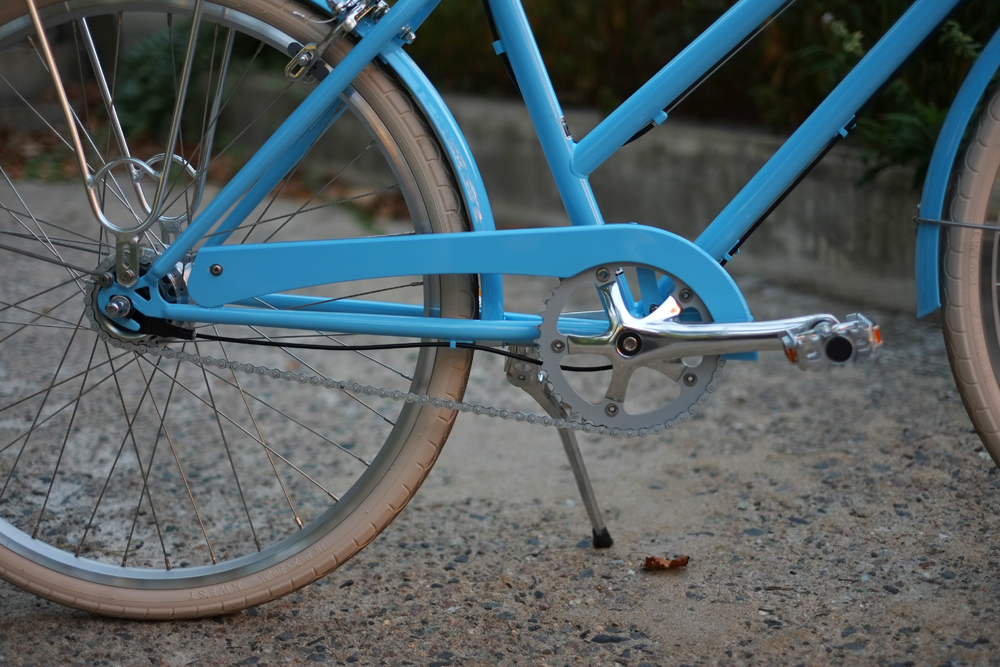 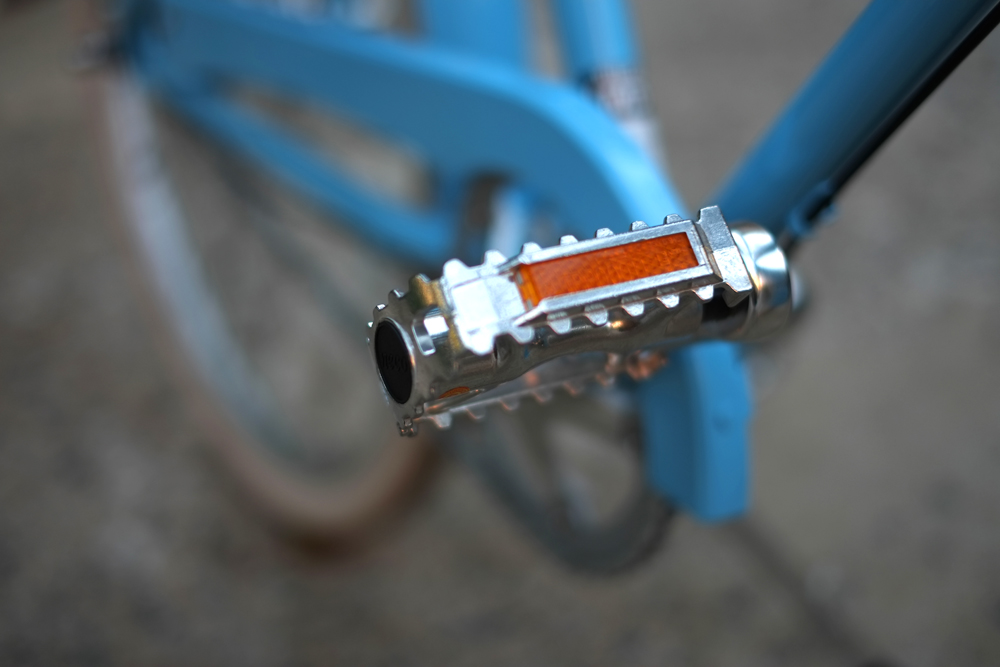 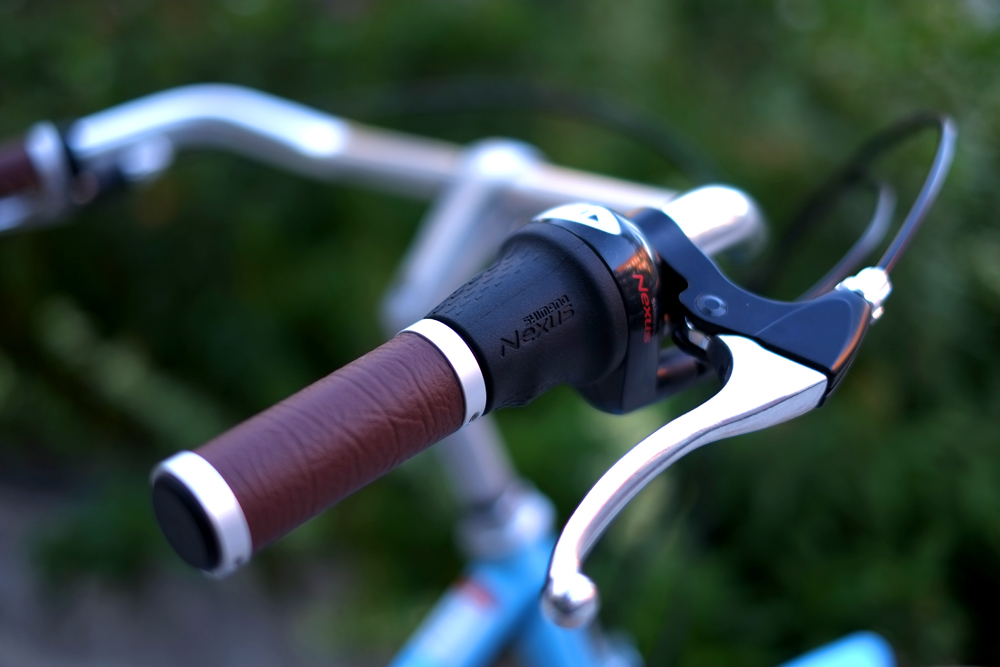 and "vegan leather" saddles and grips. Full specifications for the bicycle pictured here can be found on its product page, where the geometry chart is available also (under "sizing guide"). Weight is listed as 28lb for the hub geared models. 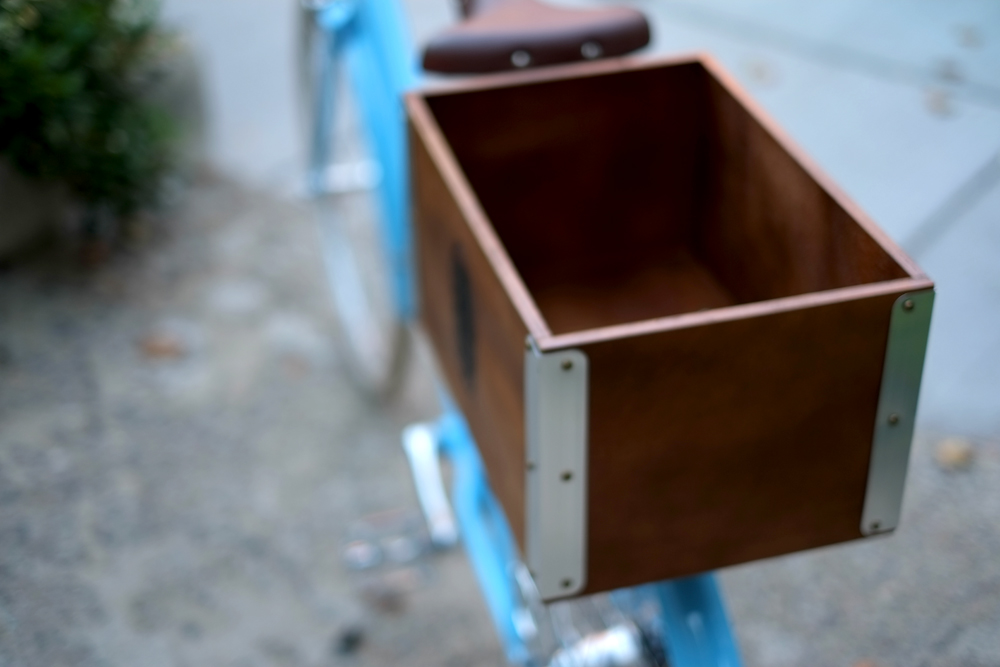 Of course the aspect of these bikes that passers-by tend to notice the most is the lovely big handmade wooden crate on the rear rack. Available as an accessory, Brooklyn Bicycle Co. has recently redesigned this crate to be significantly lighter than the version I tried, and has also added a front crate to the lineup. 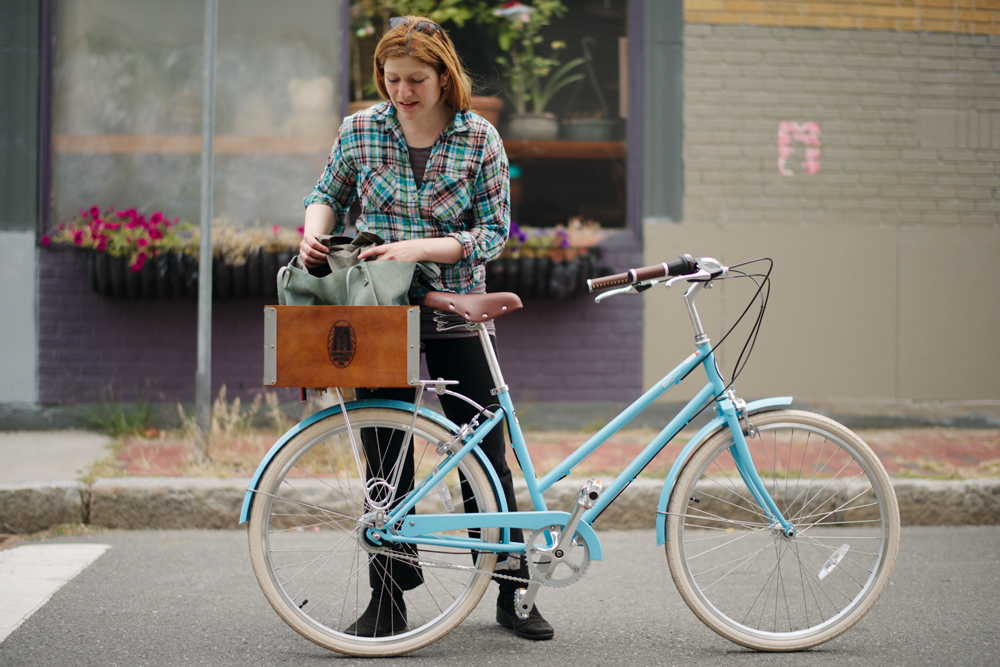 I found the size and depth of the crate to be just right for the secure portage of my bag and other possessions, and enjoyed using it very much. And I think this particular one would be even more popular, were it offered with a option to customise the engraving (what I'm really saying is that I'd like one with the Lovely Bicycle logo please!). But in seriousness, crates are a fantastically useful accessory for someone like me: keeping the messy pile of stuff I tend to tote around easy to access yet out of sight. 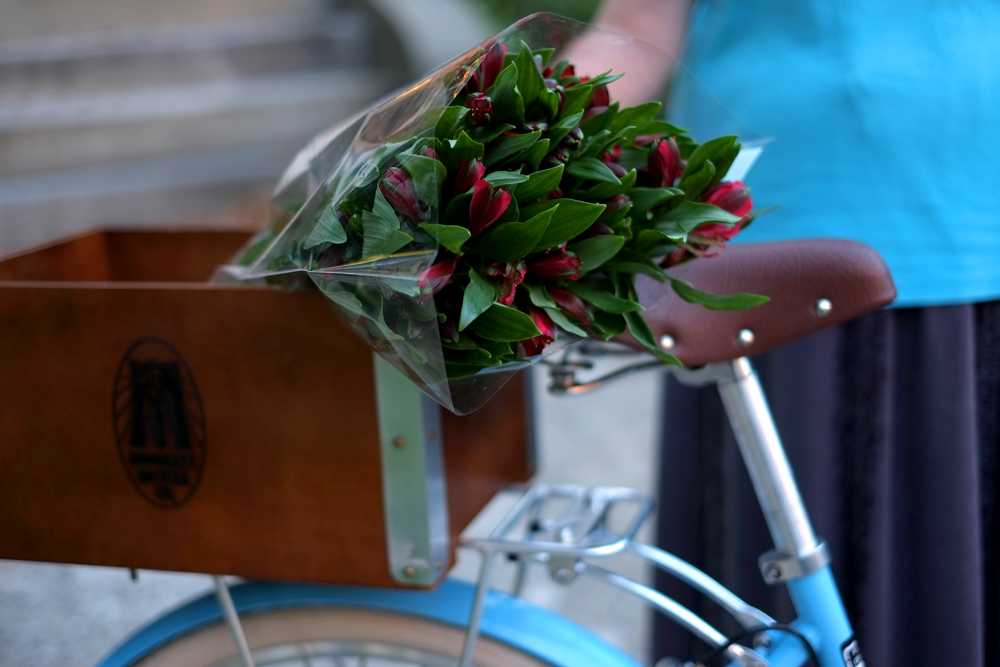 Speaking of things out of sight, I am reminded of a recent chat I had with Ryan Zagata of Brooklyn Bicycle Co. When I told him how much I liked the bicycles' ride quality, he said he was glad and added, almost shyly: "There is a lot we put into these bikes that may not be visible, but makes a difference when you ride them." He was referring to using superior parts; to spending money on better wheels in leu of aesthetic flourishes, to the extra steps taken to ensure the framesets are rust-proof even if left outdoors in winters. "I know that you don't love the way our bicycles look," he added, "but I appreciate that you notice the other stuff and appreciate them despite that."

Actually, I'd never said to Ryan that I didn't like the way the bicycles looked! But I must have been pretty easy to read, because he was right. And it isn't anything specific about them either: I am fine with the straight step-through frames, with the welded construction, with the utilitarian aesthetic. For some reason, the way it all comes together on these particular machines just doesn't speak to me. But you know what? Jeez, so what. I mean, I like the look of bikes that other people don't; it's only a personal preference. 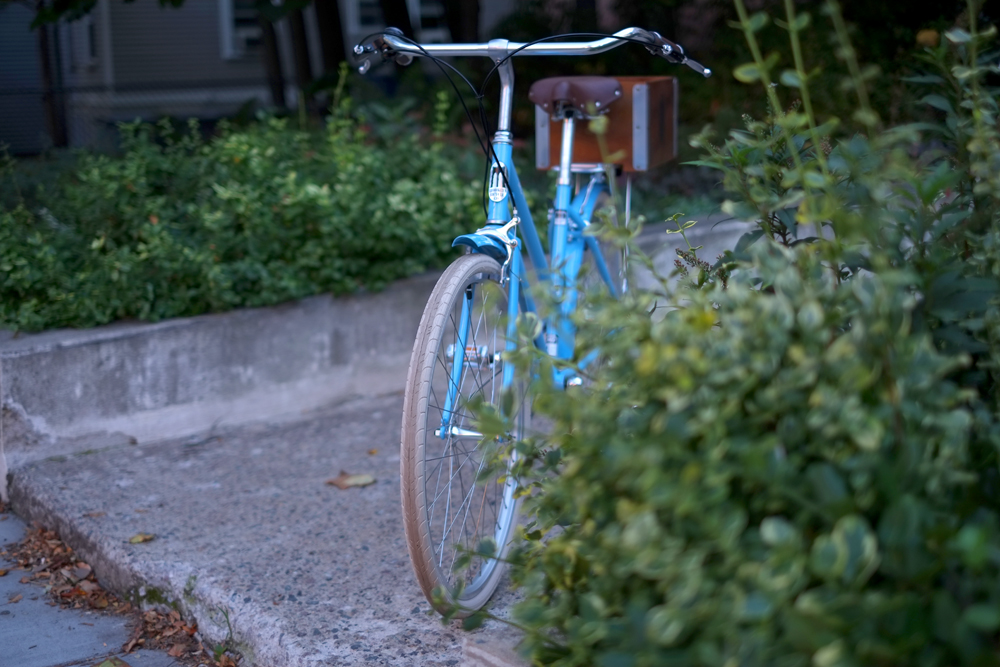 The Brooklyn Bicycle Co. bikes ride great, are priced very reasonably (prices for step-through models start at $399), and plenty of folks find them attractive. They are also, judging by some reader feedback I've had, quite durable (and I'd love to hear more from owners on this end, if you care to contribute in the comments). Are they the prototypical American urban bike representing all that the Brooklyn reference suggests? Perhaps we ought to ask the Europeans! In any case, it's nice to see the cross-pollination - and the increasing number of nice, ridable, affordable bikes on both sides of the pond.

Brooklyn Bicycle Co. machines and accessories are available online or from local retailers. With thanks to the Bicycle Belle in Boston for the test rides! Full picture set of the Willow here.
Labels: bicycle reviews