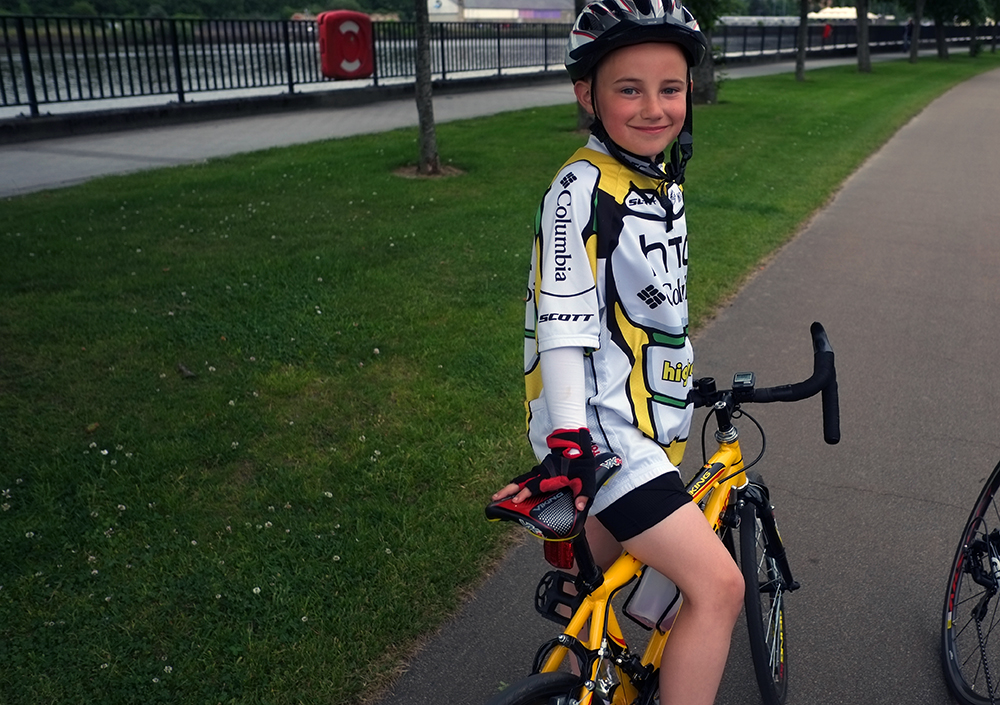 Along the Foyle bicycle path in Derry, I have grown accustomed to seeing all sorts of cyclists on all sorts of bikes. But I did a double take today, when I noticed beside me what appeared to be a perfectly normal, perfectly proportioned roadbike - only shrunken to a diminutive size. I have seen junior roadbikes before. But this one was one step smaller still, its wheels similar to those on my folding bike. And the rider was a boy whose age was almost certainly in the mid-single digits. The overall effect was like seeing a child on a Shetland pony, except a road cycling version of that. Unable to contain my delight, I complimented the fellow on his machine and asked a few questions. 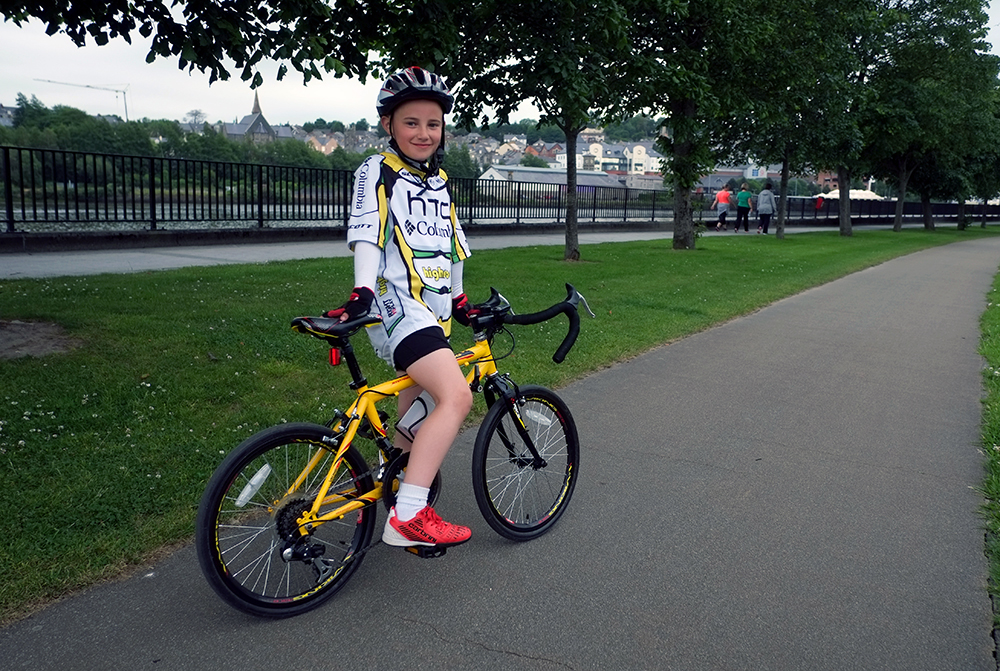 The bicycle he's riding - which I'd assumed at first was a concoction of parts assembled by a parent - is in fact an off-the-shelf Viking Jetstream - a 20" wheel roadbike equipped with teeny drop bars, a short-armed crankset and a miniature racing saddle. The bike is intended for children 6-8. The single water bottle cage takes up most of the space inside the main triangle, which should give you a sense of its size! 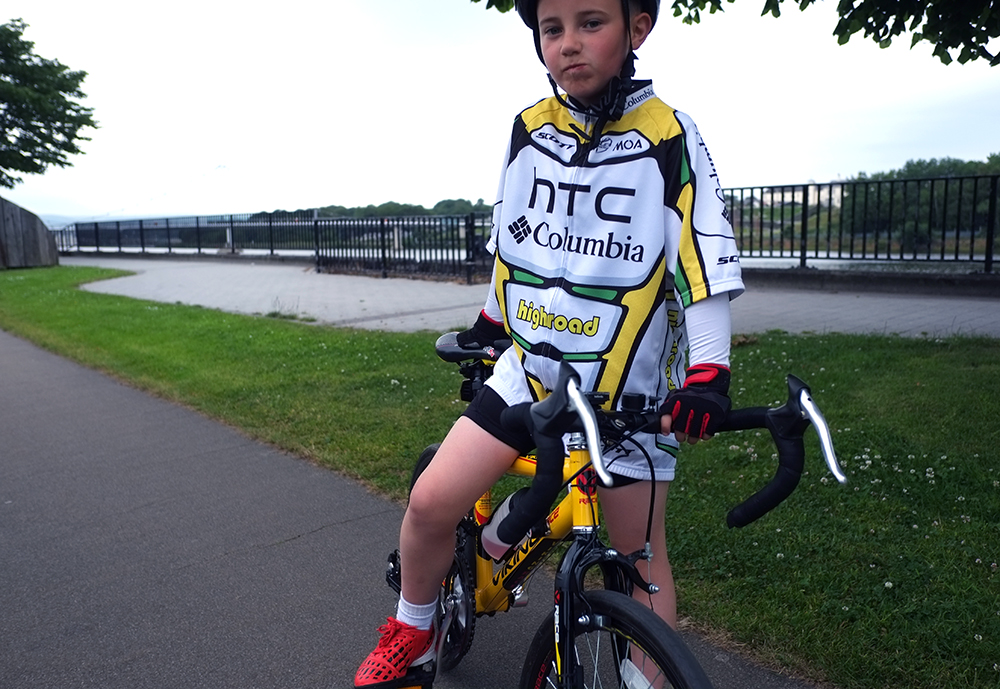 While at first glance the frameset looks pretty modern, it is in fact hi-ten steel. And on closer inspection, the downtube shifters create a bit of a vintage vibe. The 28cm tires are a nice, comfortable width (the only problem being, unable to find tubes with Presta valves for the 20" wheel size). The bell and cycling computer finish off the pro look.

Also interesting, I thought, is the rider's position - which is pretty aggressive for his age, with bars slightly below the saddle. That, plus using the downtube shifters, calls for a great deal of balance and flexibility, which this boy clearly has. I asked T whether his bike was comfortable, and he assured me it very much was. The furthest distance he's done so far has been 16 miles - accompanied by his Dad - and he looks forward to going further still. 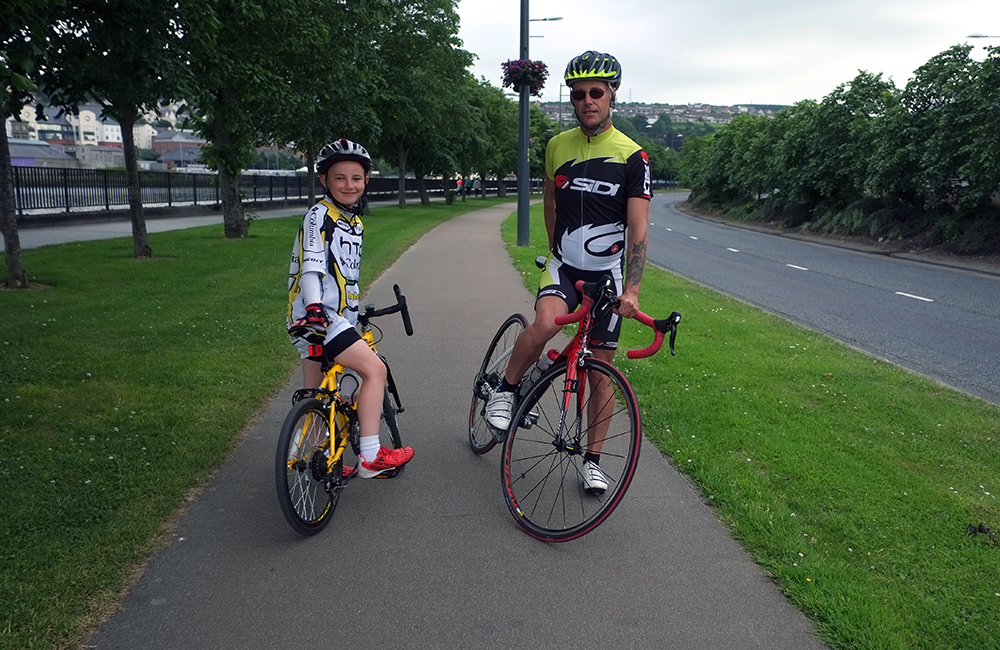 When I see young children riding with their roadie parents, it is usually on an upright MTB-type machine. This, combined with never having seen a roadbike this small in person before, led me to assume that bikes like this are pretty rare. But upon doing some research I was pleased to discover that tiny (pre-junior?) roadbikes are not uncommon here. In the UK in particular, there appears to be a handful of bikes-direct type brands that sell 20" children's roadbikes at a low cost, including Viking and Dawes (in fact, here is an entire handy list of them). And while the quality of components and choice of materials vary, a knowledgeable parent - or bike shop - could easily make some tweaks to ensure the machine is safe and functional. Having written about children's bicycles before (see here, here and here), the topic of cost vs quick rate of outgrowing the bike always comes up. In light of this, it's good to know there are affordable, off the shelf options available for even very young children who'd like to try roadcycling.

But all that aside, the sight of a little kid whizzing past on miniature roadbike, in the deep drop position, just put such a big smile on my face. Thank you, speedy T, for making my evening!
Labels: children roadcycling show and tell