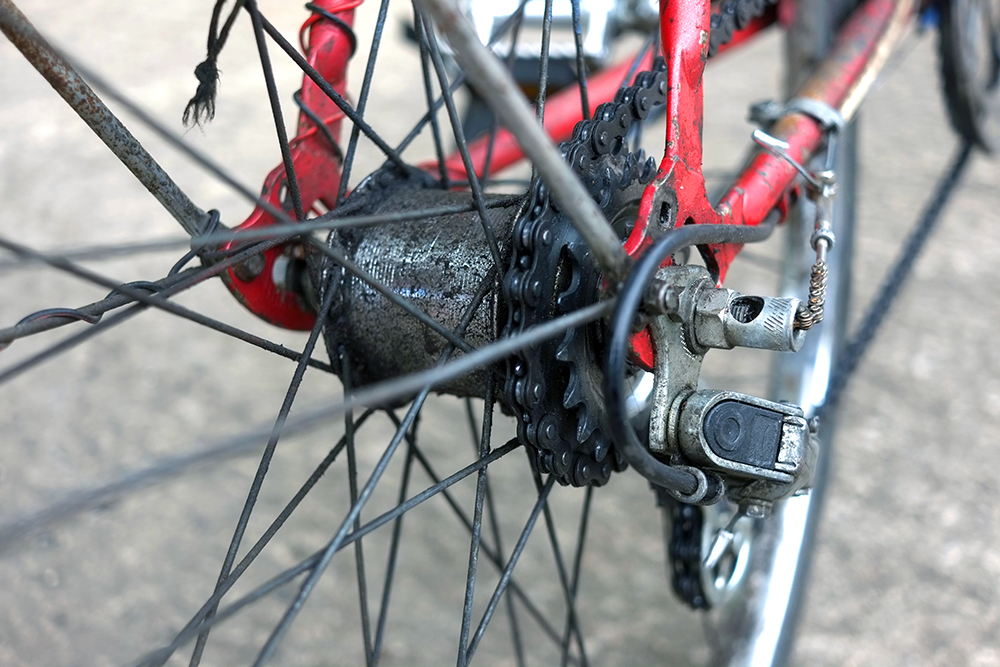 On my Brompton folding bicycle I have a drivetrain that most people who notice it find innovative and exotic: a 3-speed hub combined with a 2-speed derailleur. "Leave it to those engineers to come up with a solution like that!" a man on a train exclaimed the other day, awed by the eccentric pulley and cog medley. But while exotic it may be, mixed hub/derailleur gearing is hardly innovative - considering it dates back to the late 1930s, when the Birmingham-based Cyclo Gear Company began offering conversion kits for turning one's hub into just such a drivetrain, as a means of achieving a wider gear range. 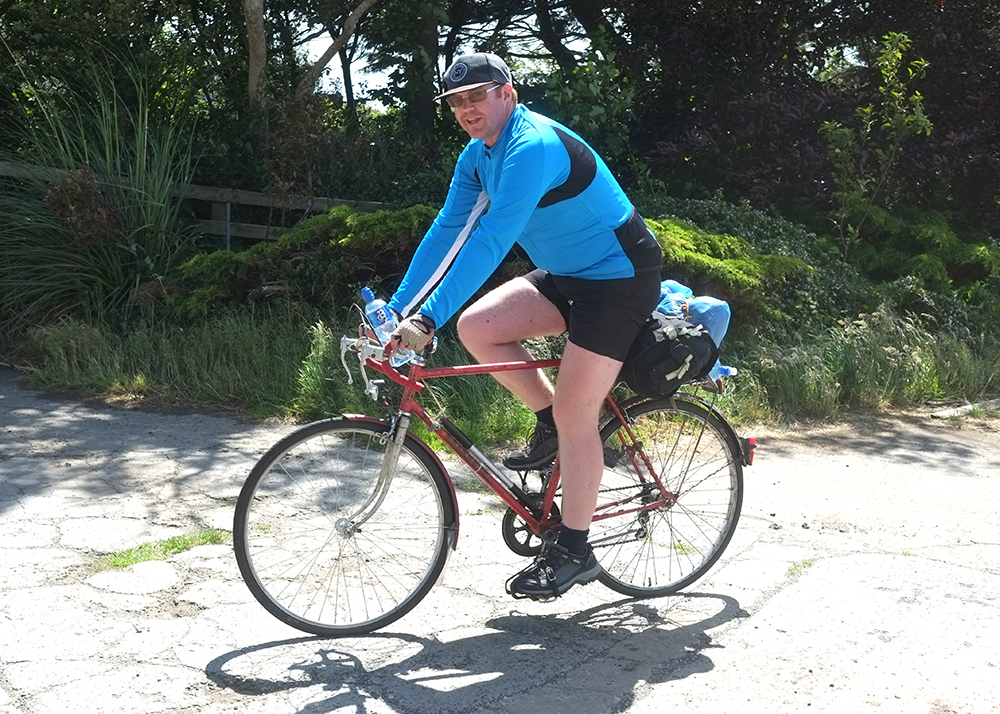 I was reminded of this fact when visited by my friend Bryan over the weekend. Bryan enjoys a variety of vintage bicycles, from the locally produced Viking featured here last year, to my early Claud Butler mixte, of whom he is the original owner. This time Bryan arrived astride a delightful velo-concoction featuring a DIY hub/derailleur drivetrain. 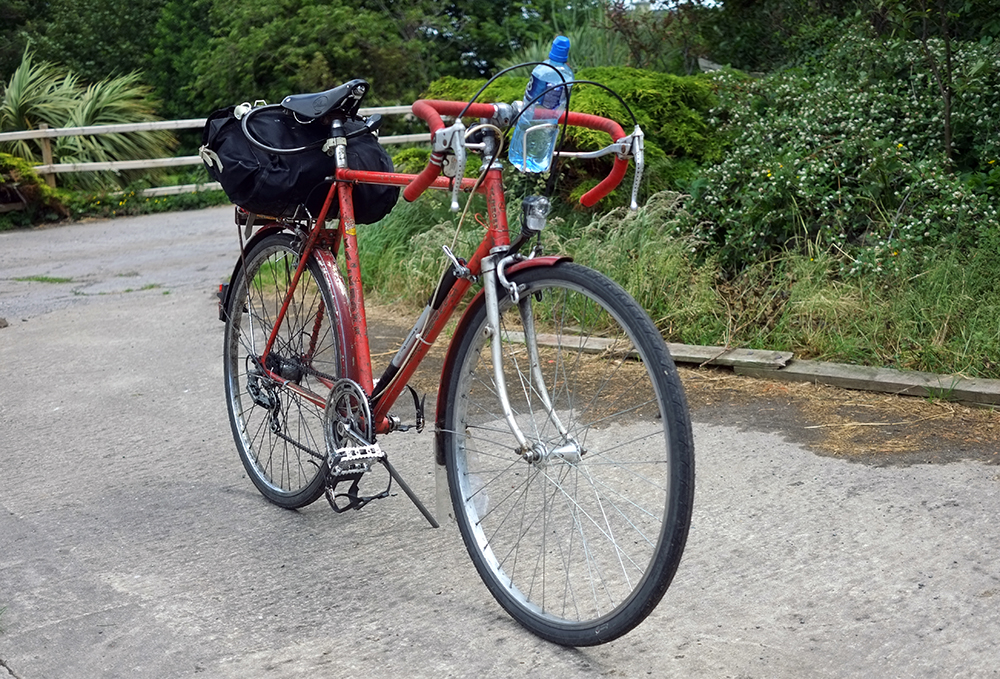 The bicycle, funny enough, is a Kalkhoff - whose present day e-bikes I only recently wrote about. This one, however, is from the 1970s - a light touring model, originally equipped with fenders, eyelets for racks, clearance for wide-ish tires, and internal routing for dynamo lighting. 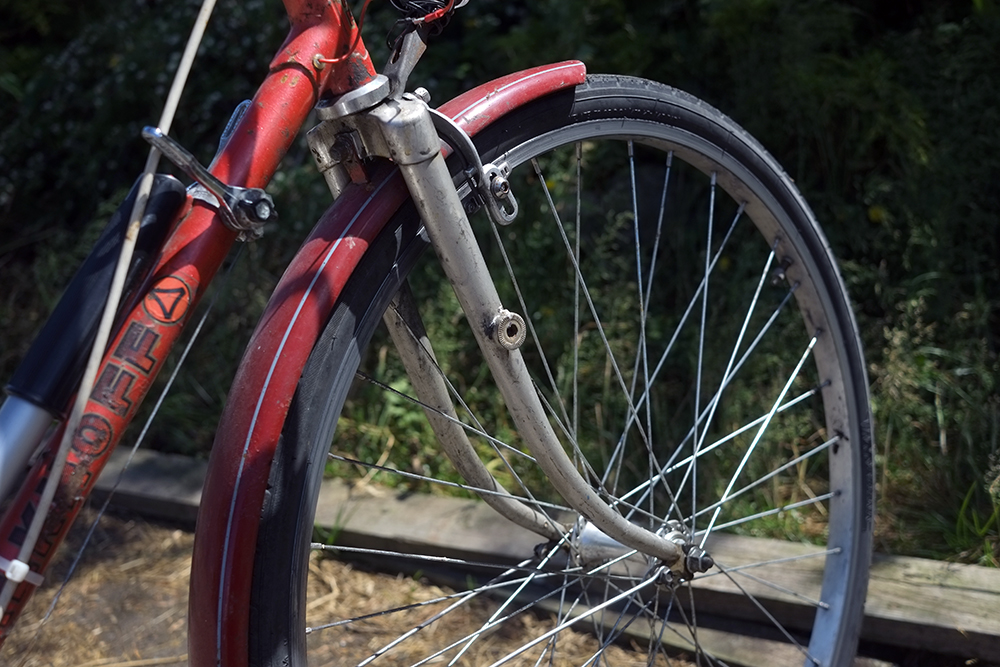 The fork is a replacement, belonging to a much older bicycle. The history of either it or the frame is not known to Bryan, beyond the fact that it was initially purchased in a bike shop in Ballina, County Mayo, according to the seat tube decal. 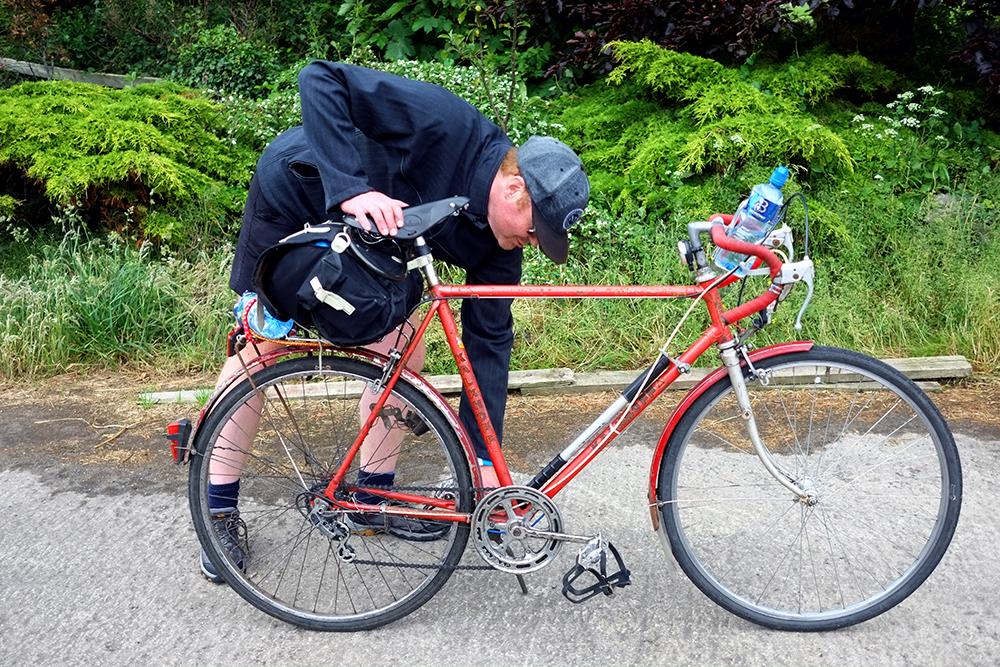 Having found it discarded and in poor condition, he thought the Kalkhoff, with its semi-horizontal dropouts, would make an excellent candidate for experimenting with hybrid hub/derailleur gearing. 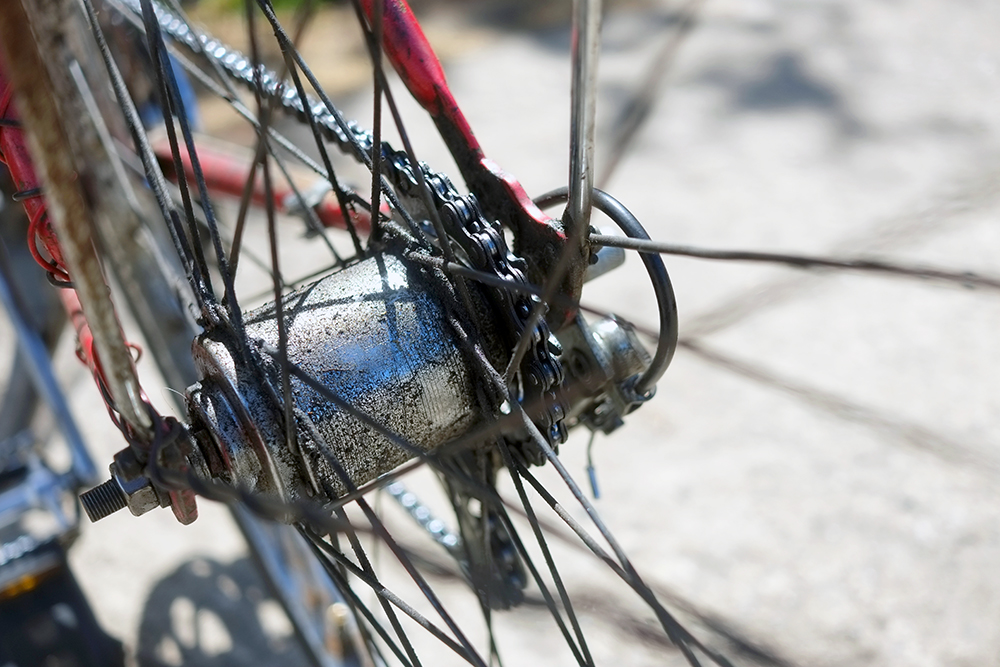 There are several ways of creating a mixed drivetrain of this kind. This write-up from Sheldon Brown and this detailed article from Classic Lightweights pretty much cover them. Pre-1951 Sturmey  Archer hubs had screw-on sprockets, making it possible to replace them with threaded multispeed freewheels. Bryan, however, used a standard Sturmey-Archer AW3 hub from 1981. He explains that Sturmey hubs have two shims plus the sprocket, which allows you to tweak the chainline. If you leave out one of the shims you can fit two dished sprockets back to back - which was what he did.

To create his 6-speed drivetrain, Bryan combined the 3-speed hub with two cogs (19t and 22t) meant for Shimano Alfine 8-speed hubs. He opted for these, because, unlike Sturmey's own, they come in a 3/32" size, allowing him to use the standard derailleur and chain from his stash of components. As the Shimano cogs are not entirely compatible with the Sturmey hub, he had to file a little off to make them fit. All this worked out grand, enabling Bryan to avoid using conversion kits or seeking out rare, expensive parts. 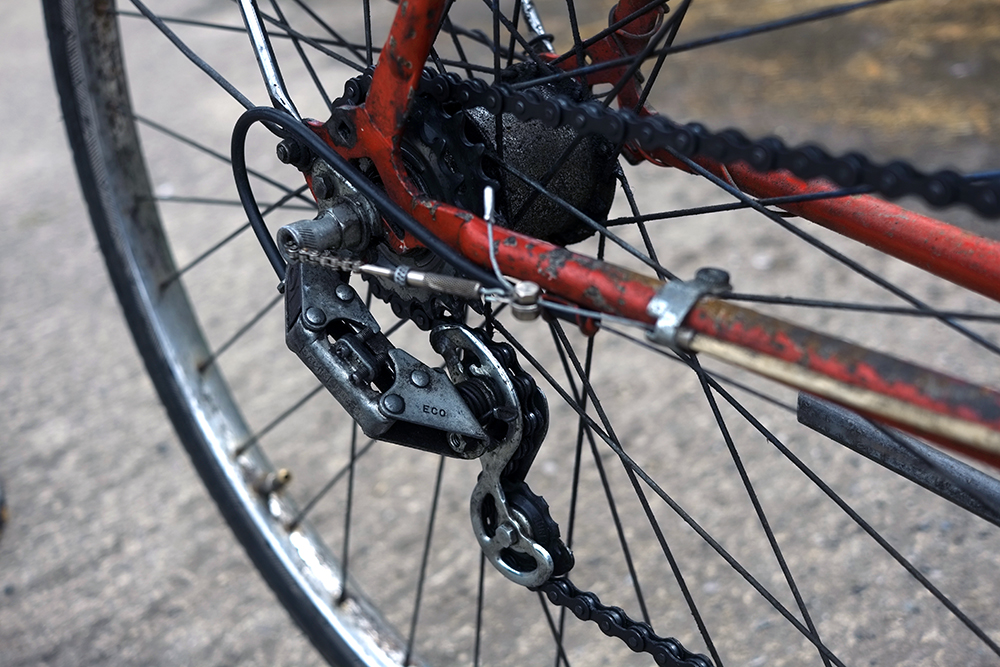 The derailleur is the one that came originally with the Kalkhoff: a Sachs-Huret, typical of mid-range roadbikes from the late 70s and early 80s before Japanese components became commonplace. The chain is an NOS bushings type chain from his stockpile. 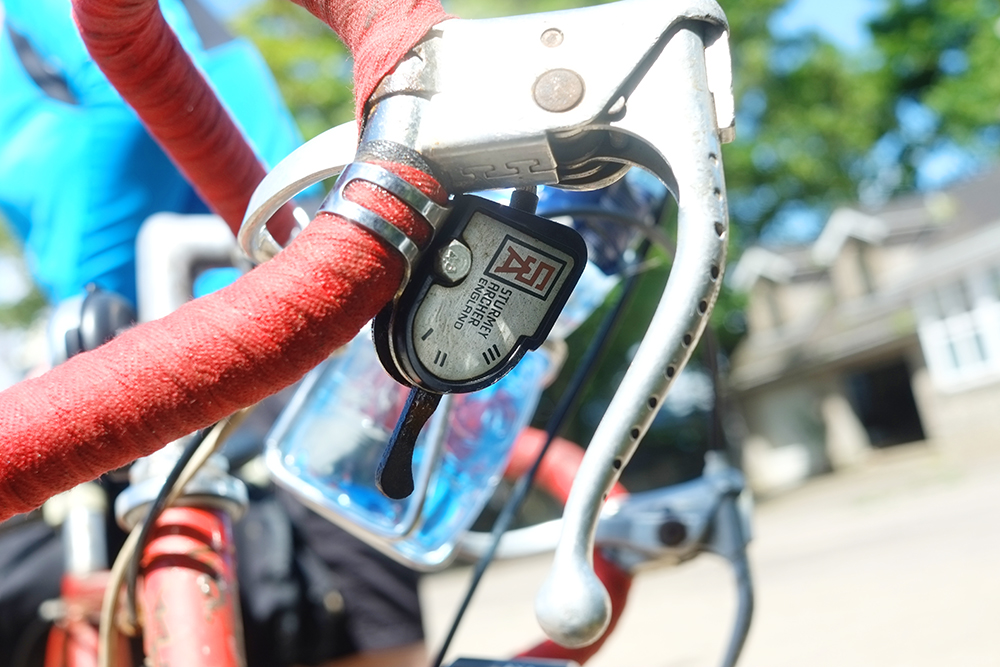 Shifting is controlled via two systems: The trigger shifter is for switching between the 3 hub gears. 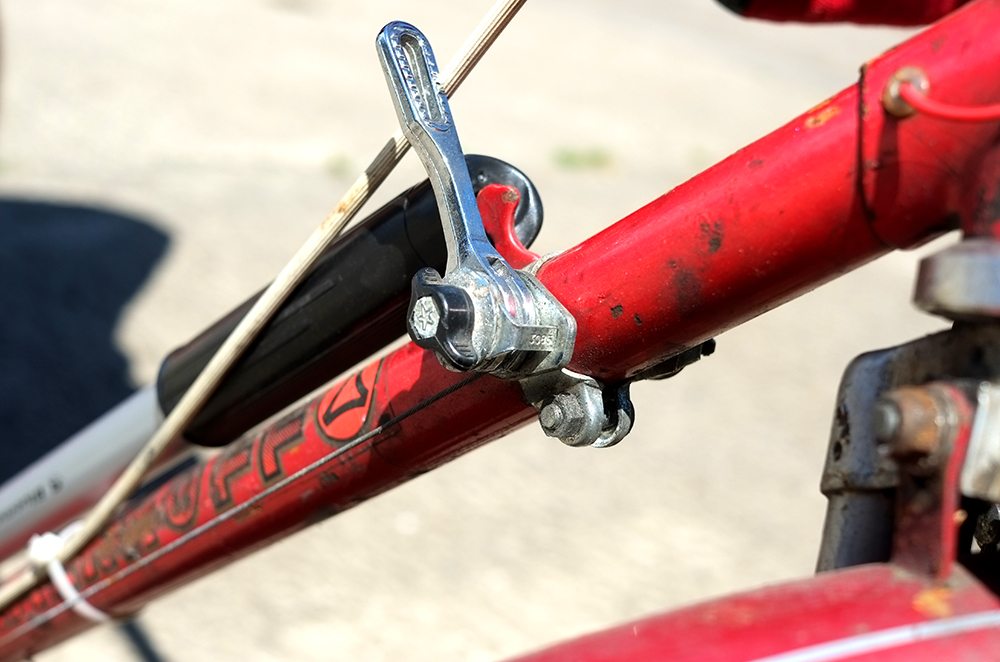 The downtube shifter controls the derailleur, for switching between big cog and small. 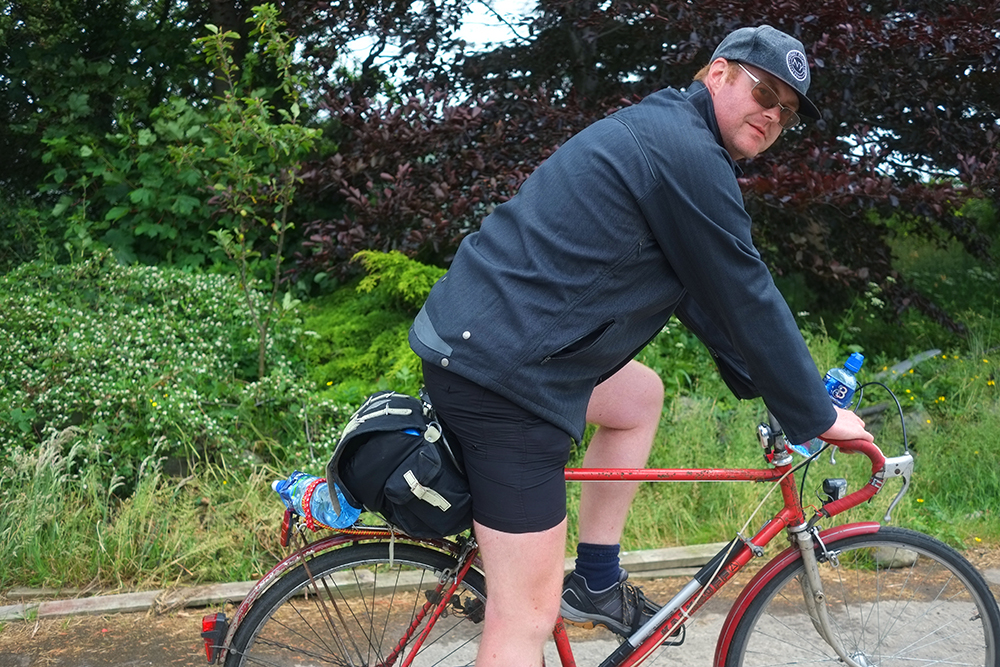 The combination of the 46t chainring that came originally with the bike and the 22t/19t sprockets, gives a nice gear range of 40-83 inches for everyday riding - which is good, as the owner has come to use the Kalkhoff hybrid as one of his everyday bikes. As for why he built it? Here is what Bryan has to say:


I built it more as an experiment to see how it would work than for any practical benefit. But after a few hundred miles on it I would say it does offer obviously a wider gear range than a normal 3 speed hub with one sprocket. And it's a wider gear range than would have been possible pre-1960 with a derailleur and single chainwheel, as those old derailleurs couldn't handle big tooth differences so typical derailleur systems then had maybe a 3 or 4 speed block with 2 tooth difference between gears. It also fills in the gaps between the 3 gears of a Sturmey hub so it's easier to find a cruising gear in a headwind.

The shifting can be confusing to begin with, but once you get used to it, I find it quite intuitive to use and very easy. And to anyone who rides in an urban environment, it offers the additional advantage that even if you need to stop unexpectedly in top gear, you can still flick the Sturmey back into first to take off again.

I would say the system works well although [for most types of bicycles] there are easier and cheaper options out there nowadays to give a wide gear ratio, so it's probably not worth the hassle unless you like to experiment.

But if you do like to experiment? Well, obviously it can be fun! As well as offering a solution for those who love internally geared hubs and derailleur gearing equally and do not want to choose. 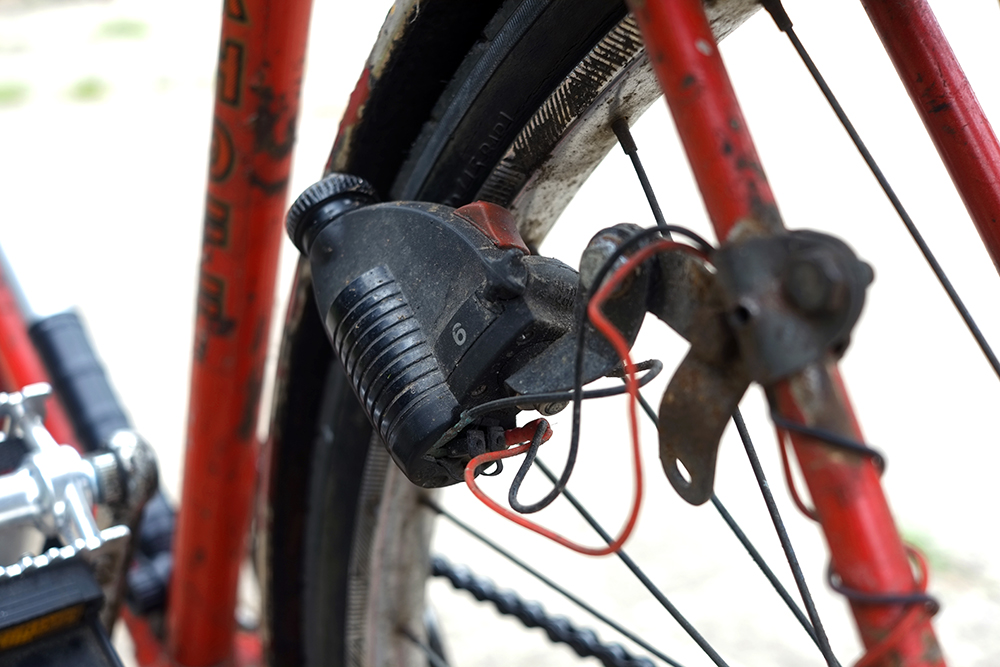 In addition to the cool drivetrain, Bryan outfitted the Kalkhoff with a bottle generator and LED lights, 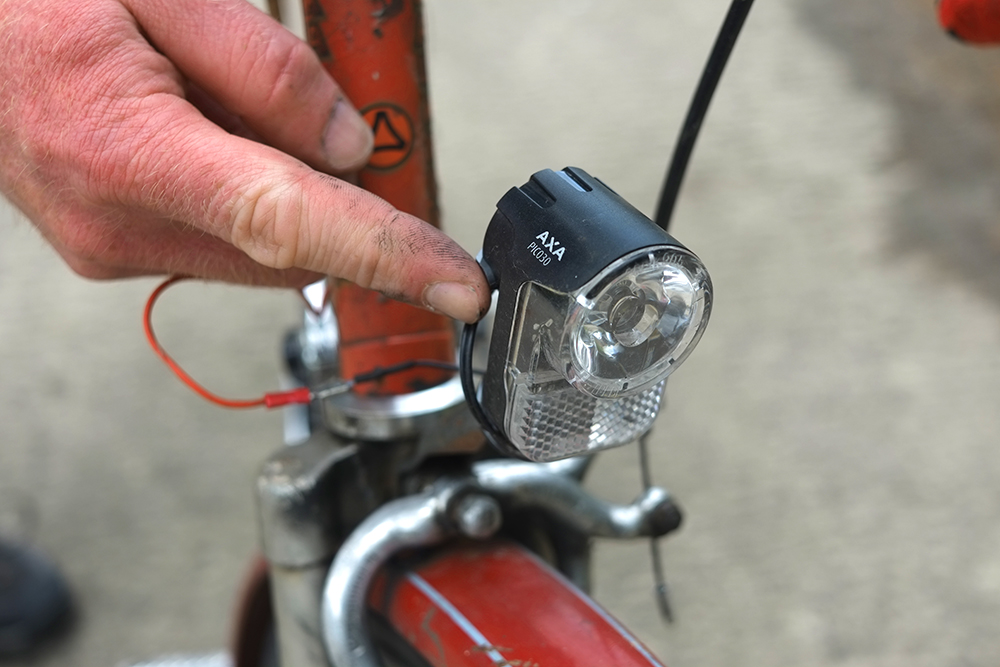 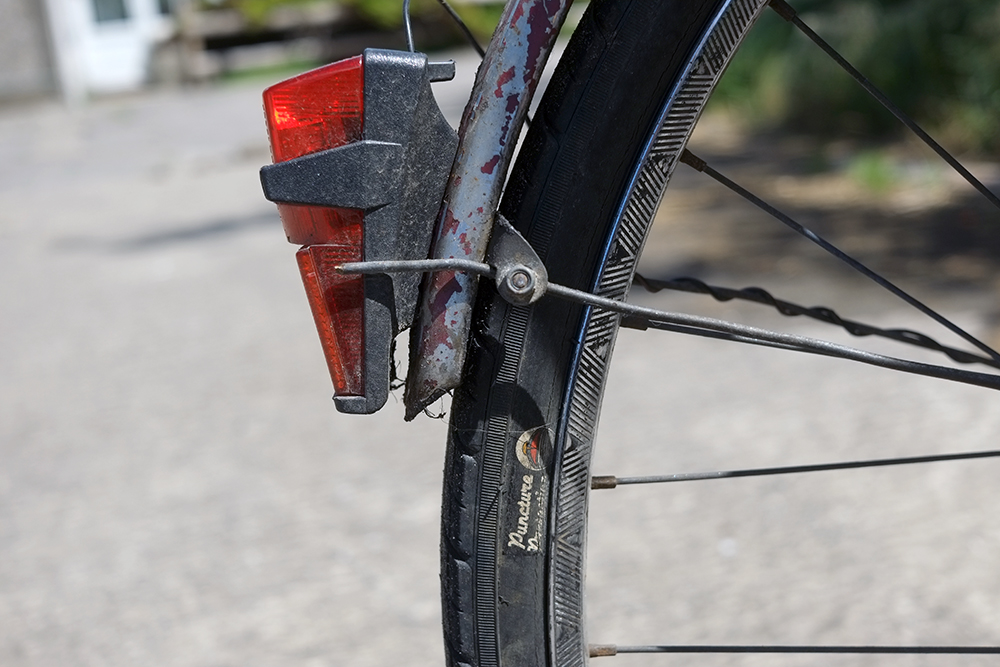 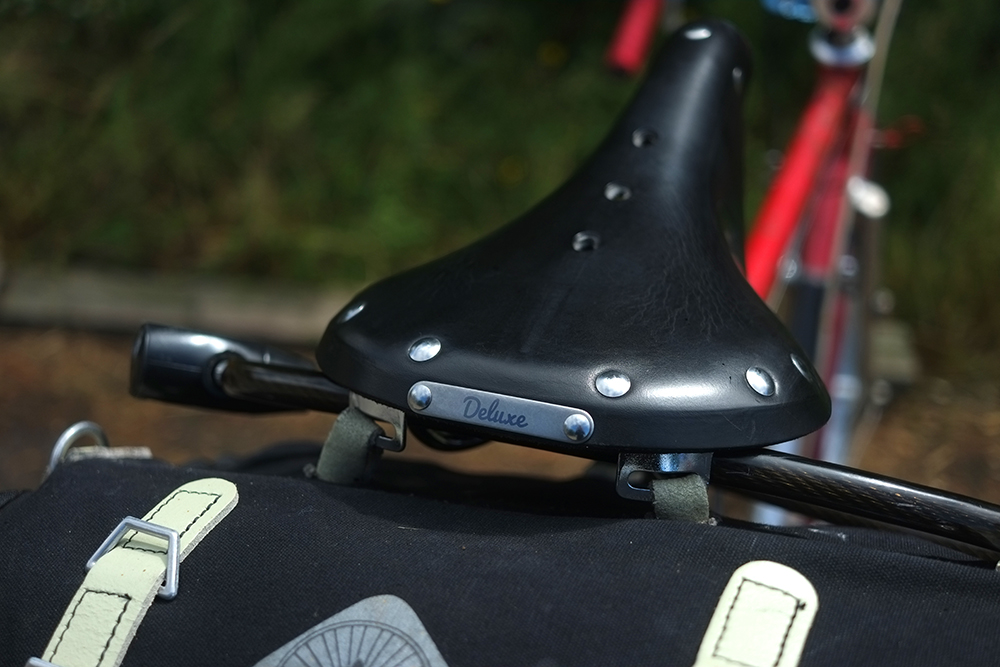 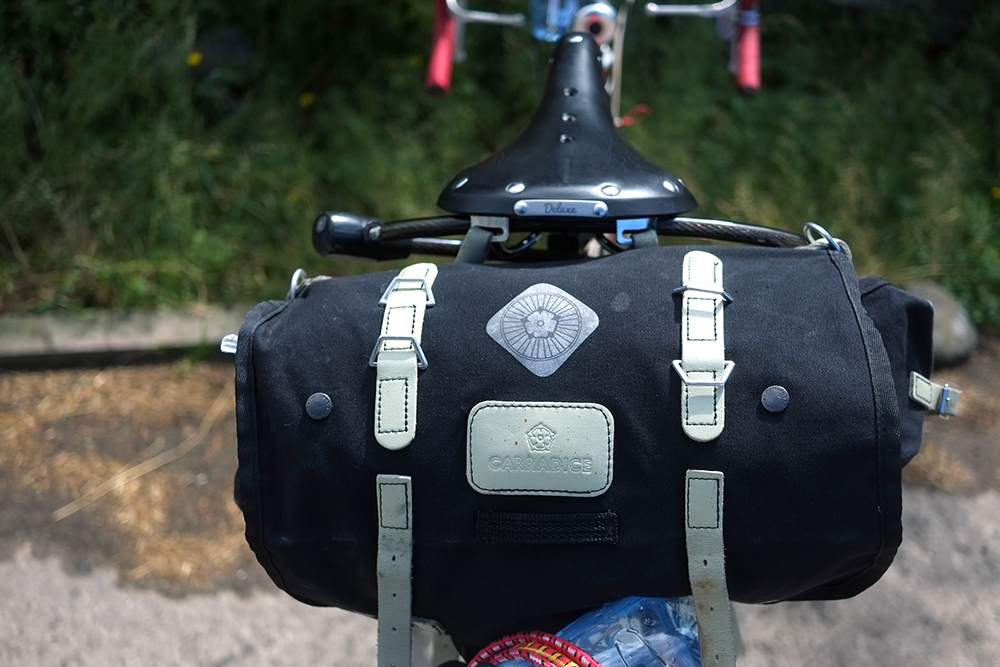 a rear rack and a large Carradice bag, 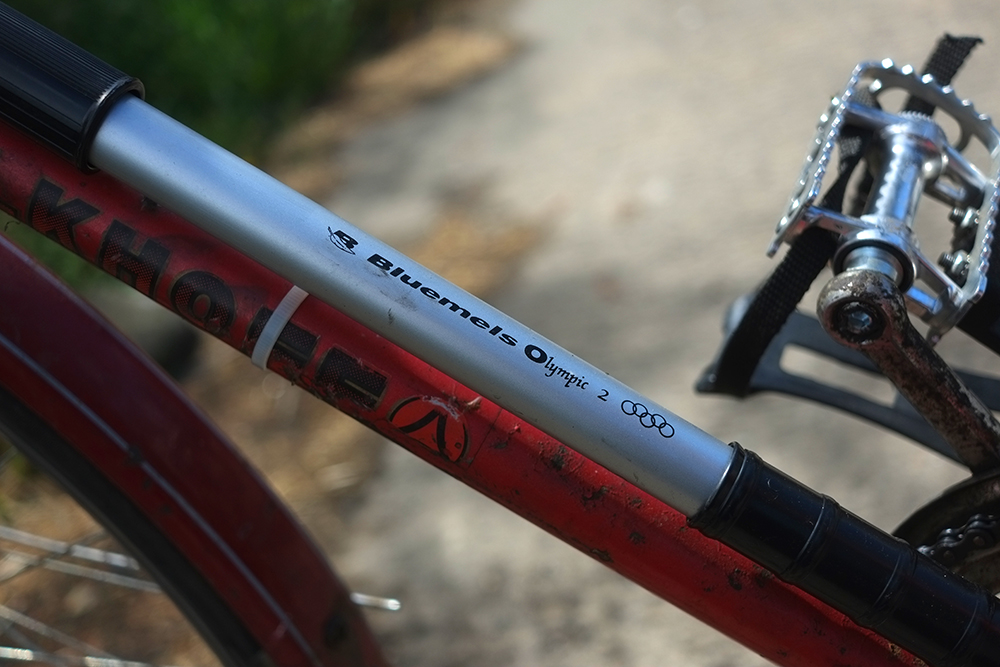 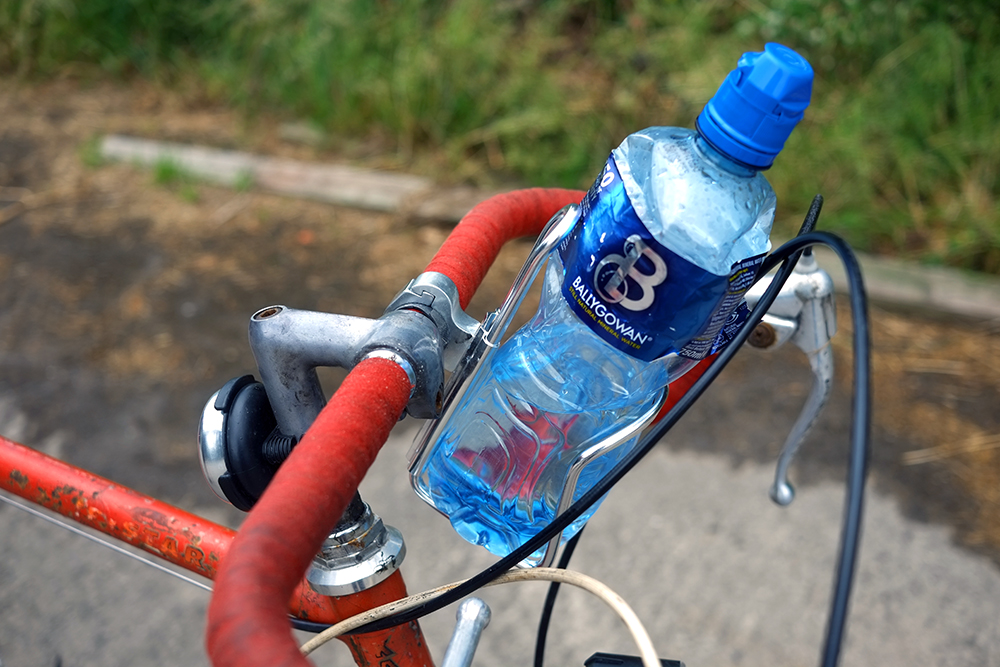 a fancy hydration portage system of the handlebar mounted variety, 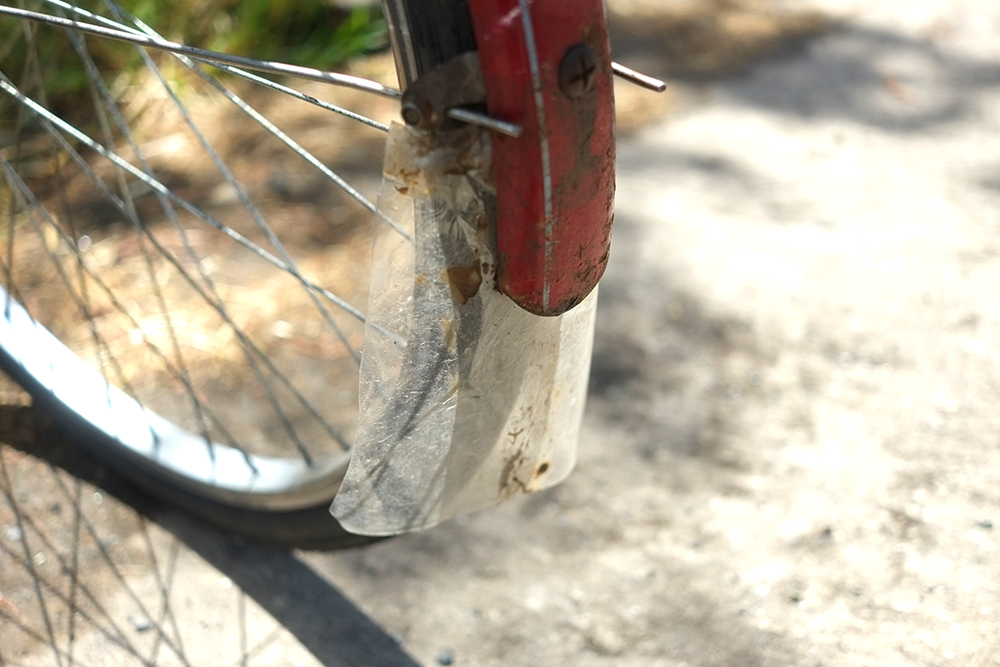 and, last, but not least, a bespoke hand-crafted, utra-lightweight mudflap! 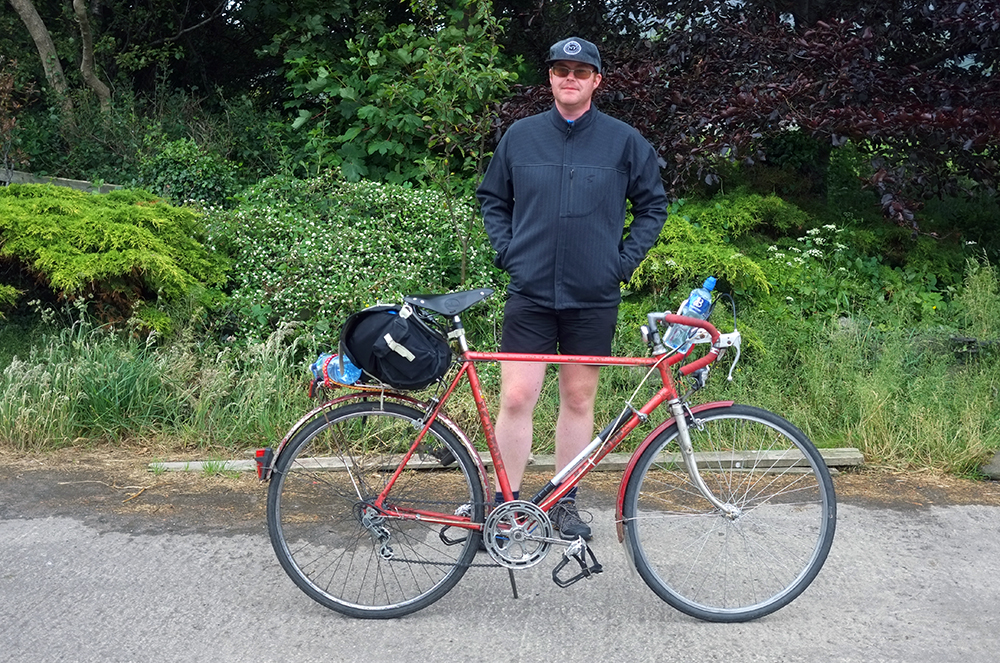 These updates were made as Bryan found himself riding the bicycle more than expected; next he will probably update the tyres and rims (it's actually amazing they have held out this long!). 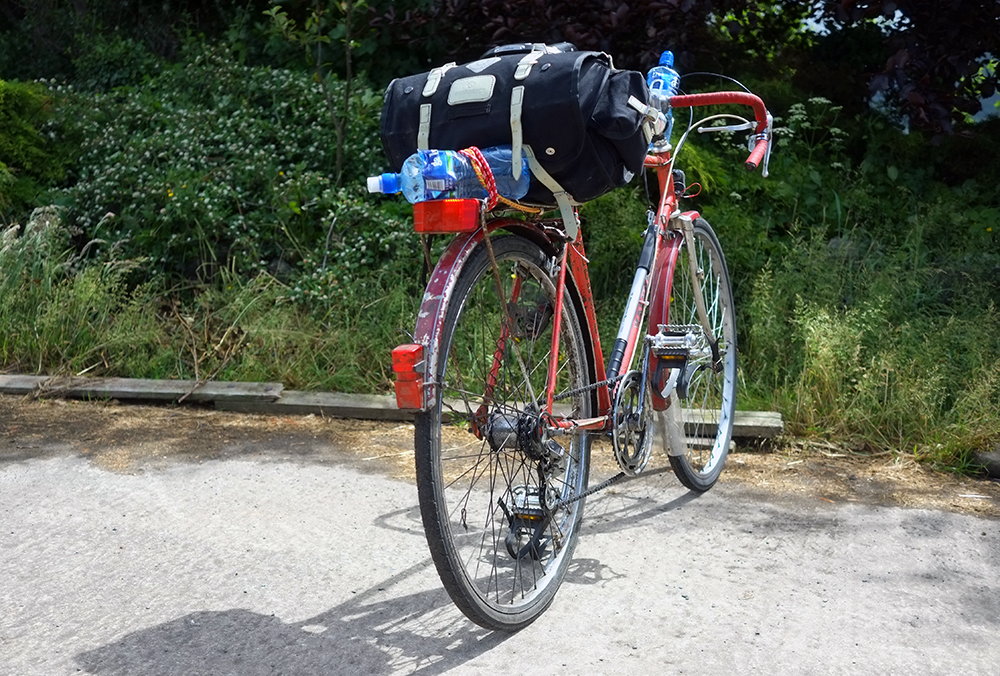 For a discarded frankenbike, which was then frankenbiked some more, the overall result is pretty darn handsome. More pictures here. And many thanks to Bryan for the show and tell and for the explanation of his hybrid build!
Labels: bike friends DIY gearing show and tell vintage vintage