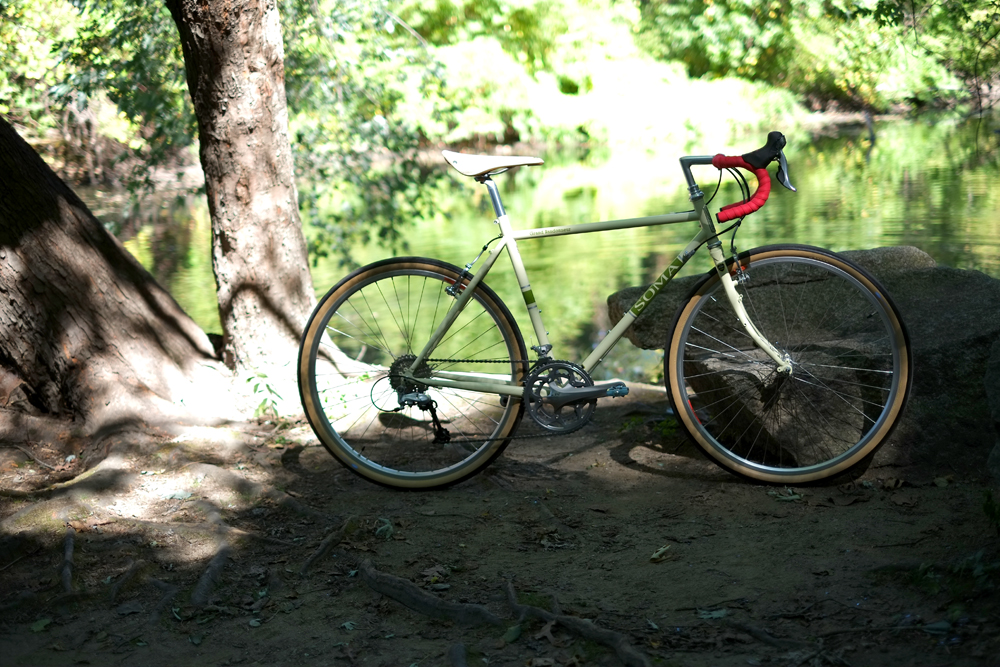 In the course of running this blog, I have come to notice some seasonal patterns in my readers' new bike acquisition tendencies. For instance, in late spring I get the most emails with questions about roadbikes, while interest in city bikes seems to peak in early Autumn. And smack in the middle of summer seems to be when desires for mixed terrain roadbikes, 650B rando bikes and the like, hit their all time high. With the warm weather no longer a novelty, no doubt the relentless heat and fierce sunshine drive folks into the woods - whereupon they discover a need for a dedicated bike for those lovely fire trails and gravel paths. In any case: Like clockwork, I have begun to receive emails pertaining to this topic. And among these is a recurring request to share my impressions of the Soma Grand Randonneur. 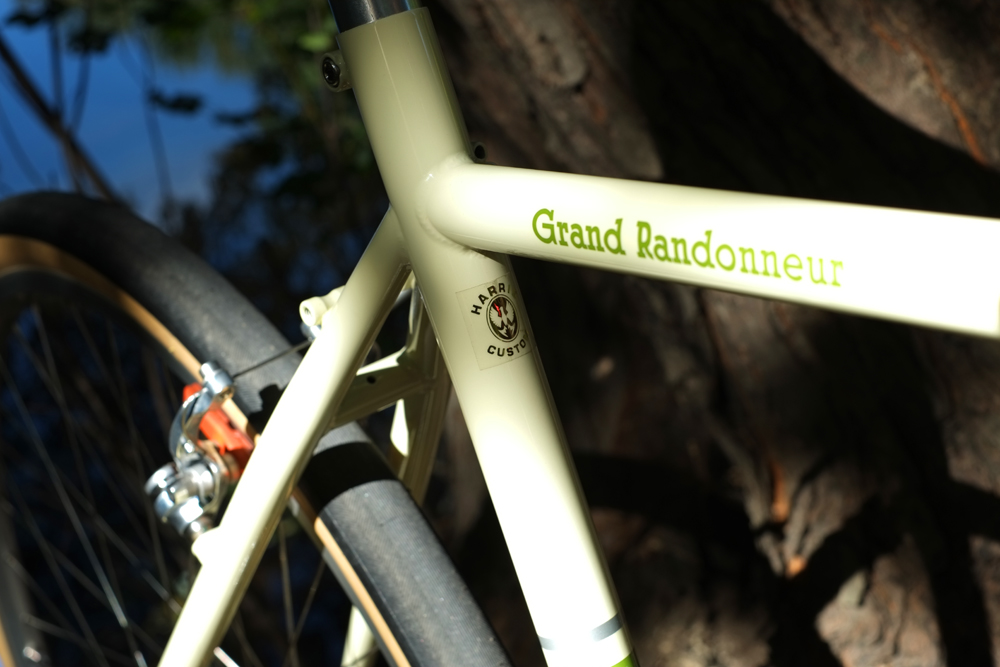 To provide some background: What seems like absolute ages ago now, and is certainly ancient history by internet standards, I "broke" the news of Soma's plans to offer a low trail 650B randonneuring model. The prospect of this was exciting, at least for those of us who care about that sort of thing, as at the time mass-produced and reasonably priced framesets of this type were an anomaly (and still are, for what it's worth).

So anyhow. I was meant to test ride the prototype of the Grand Randonneur when it became available. But by the time it did, it was summer 2013 and my life, as you may have noticed, went slightly haywire. Most bike-related plans I had at the time were put on the back burner or went out of the window entirely. And so the Grand Randonneur slipped my mind, until, on a visit back to Boston last Autumn, I saw it on display at Harris Cyclery. Looking ever so pretty in cream and green, it stood there shyly in the streaming morning light, shooting me a subtle but unmistakable come-hither glance. As it happened, the floor model was in more or less my size. And although the "cockpit" was not set up for me (normally I would use shorter-reach bars and/or stem and set the handlebars lower), we did our best in the time available to achieve a similar reach. Thereupon, I took the bicycle on a joyride through the local roads and woods for about an hour and a half. 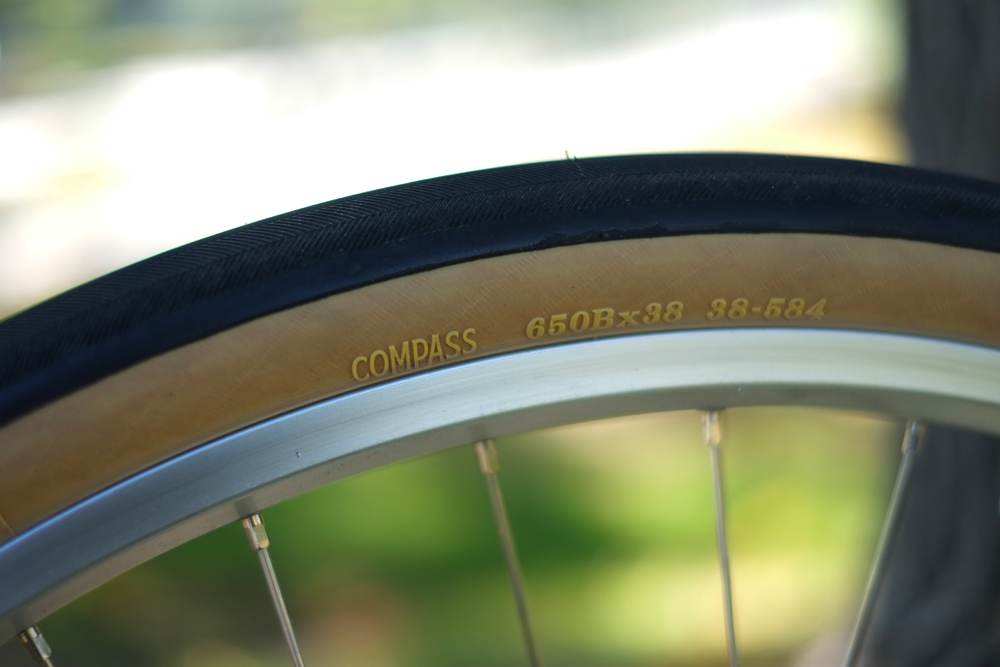 The bicycle came fitted with Compass 650B x 38mm tyres - narrower than the 42mm Hetres I usually use on such bikes, but still wide and cushy, 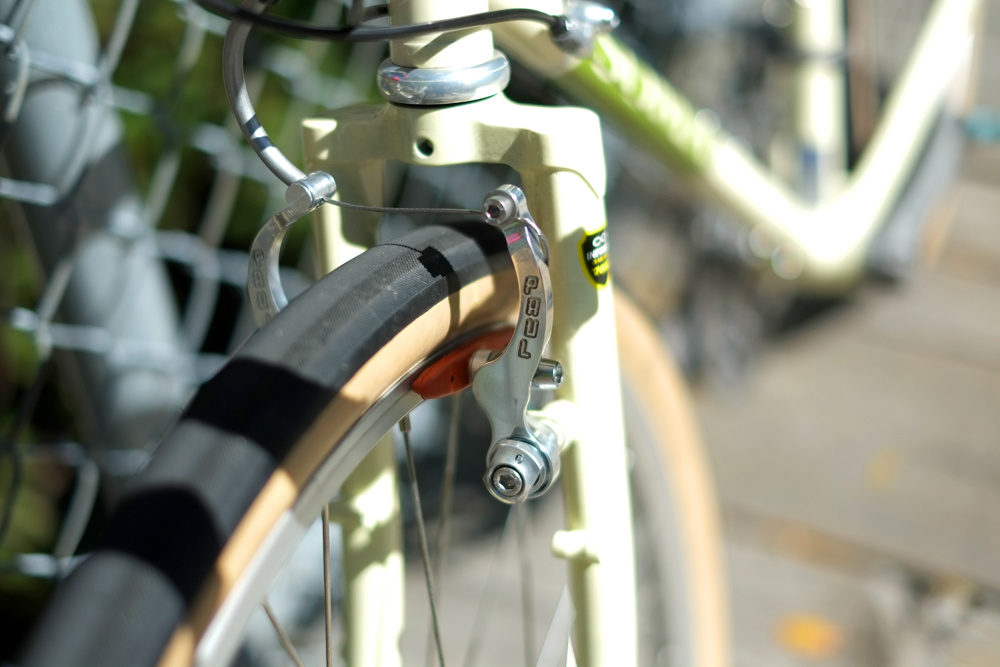 with the added benefit of having enough clearance for Paul's Mini-Moto brakes, which are wonderfully functional. Since the Grand Randonneur frameset is fitted with canti bosses, the choice is either cantilever or v-brakes (the latter being stronger, and therefore preferable to me). I am not sure whether any v-brakes currently on the market will clear 42mm tyres with fenders though. 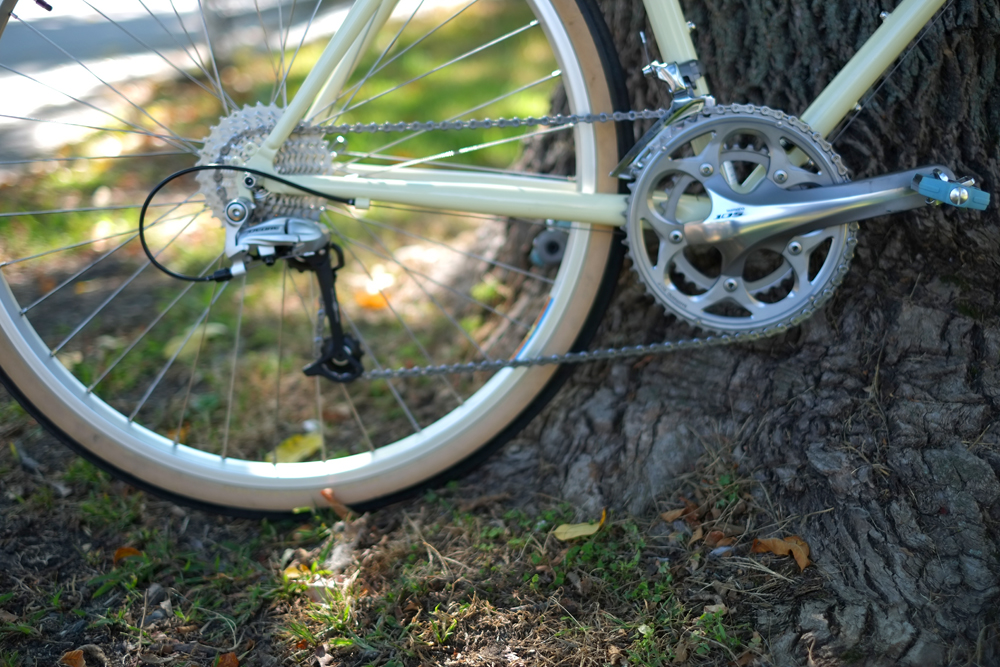 The Shimano 105 drivetrain felt nice and was geared fairly low, though owners of bicycles like this will typically want 1:1 or even sub-1:1 gearing. 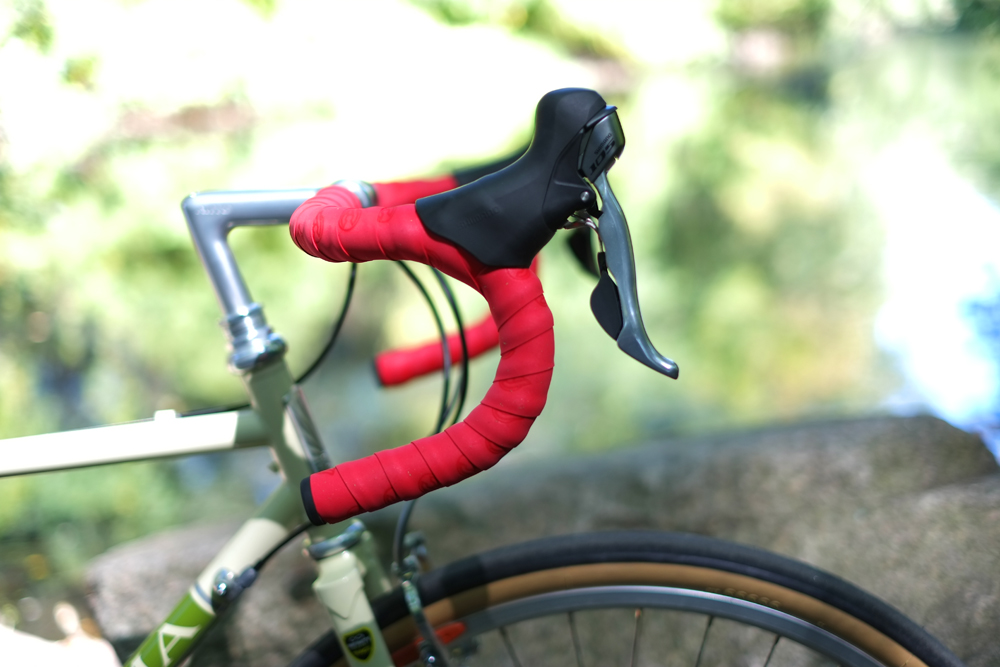 The Grand Bois Maes bars were comfy and familiar, with their lovely parallel drops. 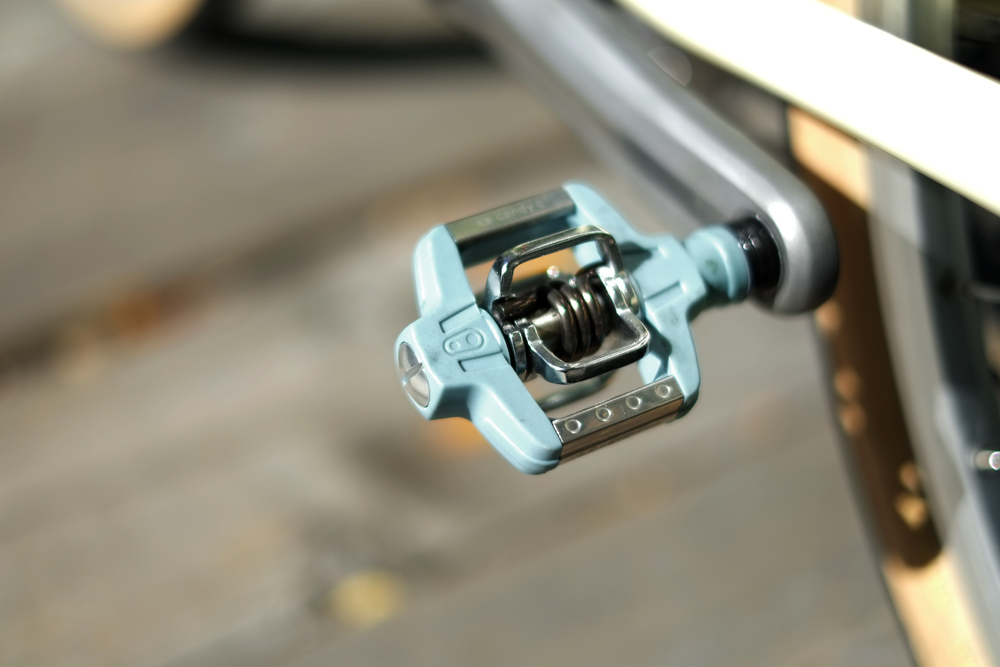 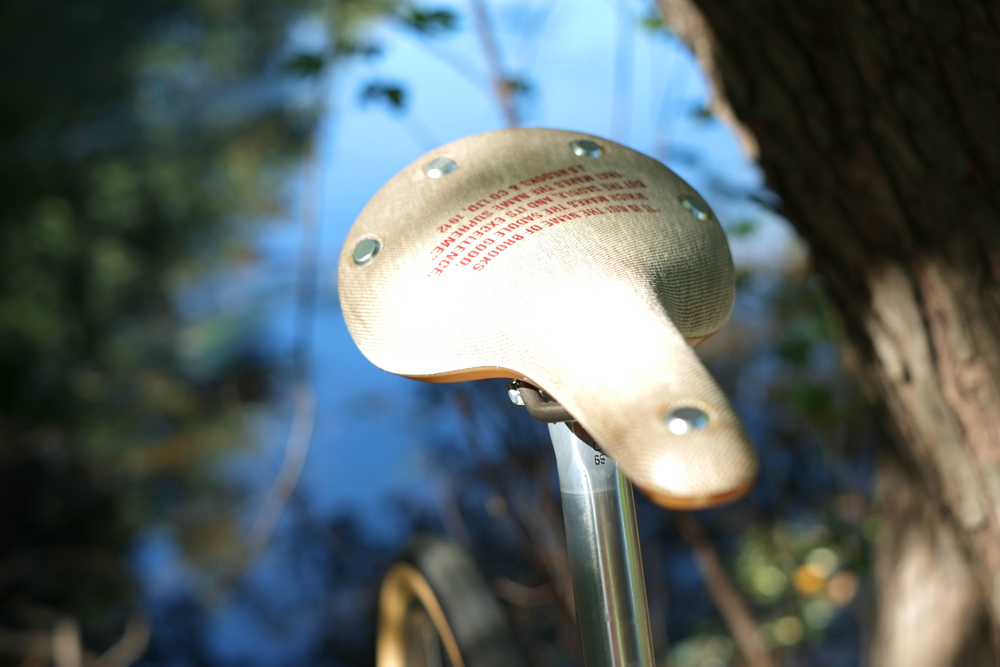 And the Brooks Cambium C17 saddle was an excellent choice for demo and floor model bikes, as it needs no wearing in and feels comfortable from the get-go (I sport one of these on my own 650B bike and the looong-term review will be out soon). 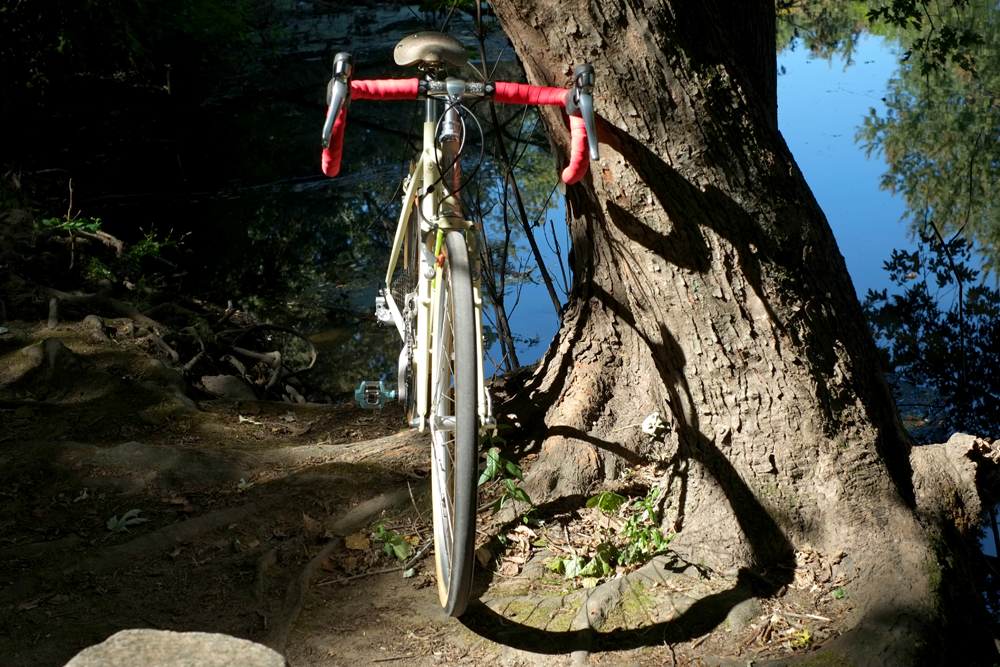 Of course, with the Grand Randonneur sold as a frameset, you can build it up with whichever components you like, barring some limitations. Notably absent here, but usually typical of a complete build for bicycles of this type are: fenders, front rack, handlebar bag, and lighting. The frameset of course comes with provisions for fenders and racks. 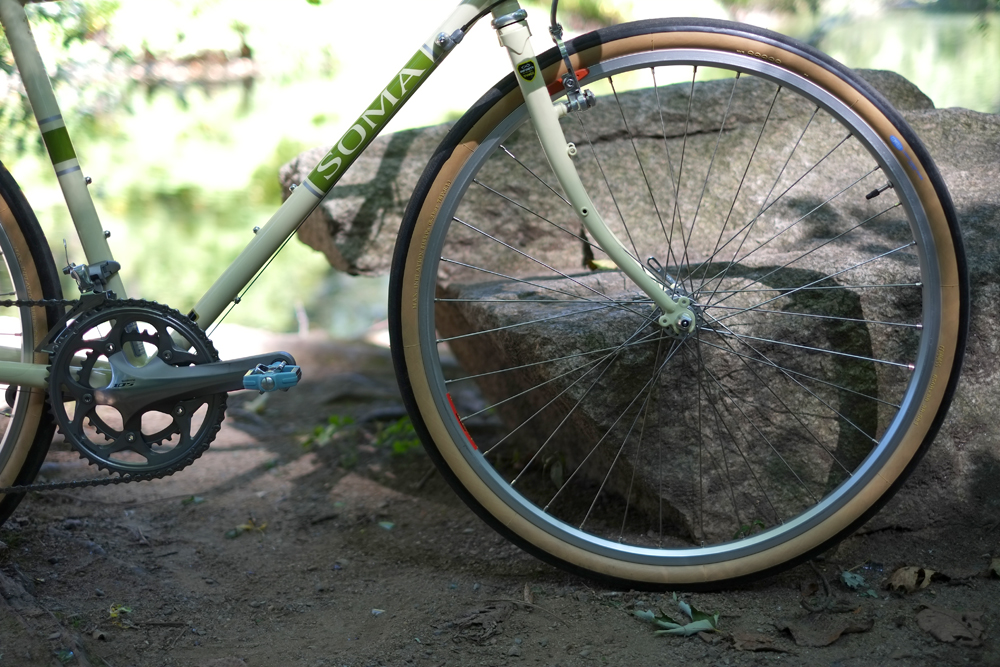 Described as a "a true low trail geometry randonneuring frame set," a distinguishing feature of the Soma Grand Randonneur is the raked-out fork. The trail varies, depending on frame size, from 29mm  to 35mm - which is indeed proper low. And just look at all that sexy toe clearance!

While the Soma fork was bent in the "continuous curve" style rather than the more elegant "French flick", I can't say that I blame them: The latter method, as I know only too well myself, is trickier and more time consuming. The simpler bend also suits the overall utilitarian look of this bicycle: its welded construction (except for the brazed fork crown, thank god) and lack of ornamentation look accessible and unpretentious. Other notable aspects of the Grand Randonneur's geometry include a low bottom bracket and fairly short (considering the need for fat tyre clearance) chainstays. The range of sizes is pretty extensive (49.5 - 65cm) and you can view the complete geometry chart here (click on the Geometry tab - and note that in 2015 Soma has slightly tweaked this frame's geometry: increased frame stack by 15-20mm and reduced the seat tube extension). 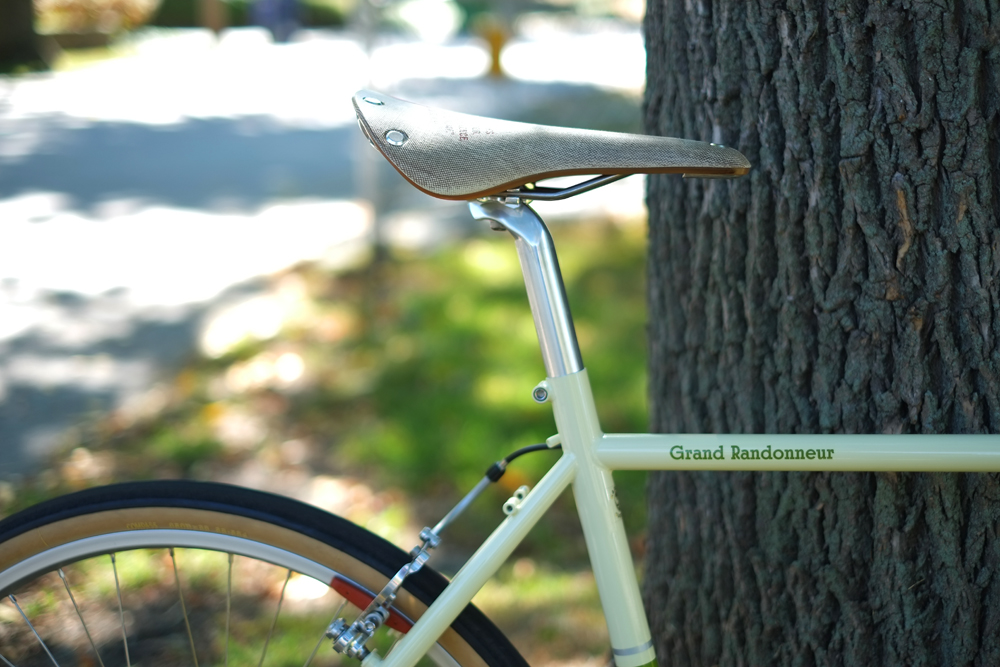 So... As mentioned earlier, my test ride of this bicycle happened spontaneously. In fact, in my own little world here in rural Ireland over the past 2 years, I have been rather oblivious to the goings on of the bicycle industry and had not been following the Grand Randonneur project at all since its earlier stages. I did not know what to expect of the finished product. But my assumptions were, that, like the prototypical randonneuring bicycle of the type Jan Heine describes again and again so thoroughly in his publications, the Soma Grand Randonneur would (1) have low trail geometry with room for 650B x 42mm tires, and (2) be constructed out of lightweight, thin-wall, standard diameter steel tubing - for optimal "planing." 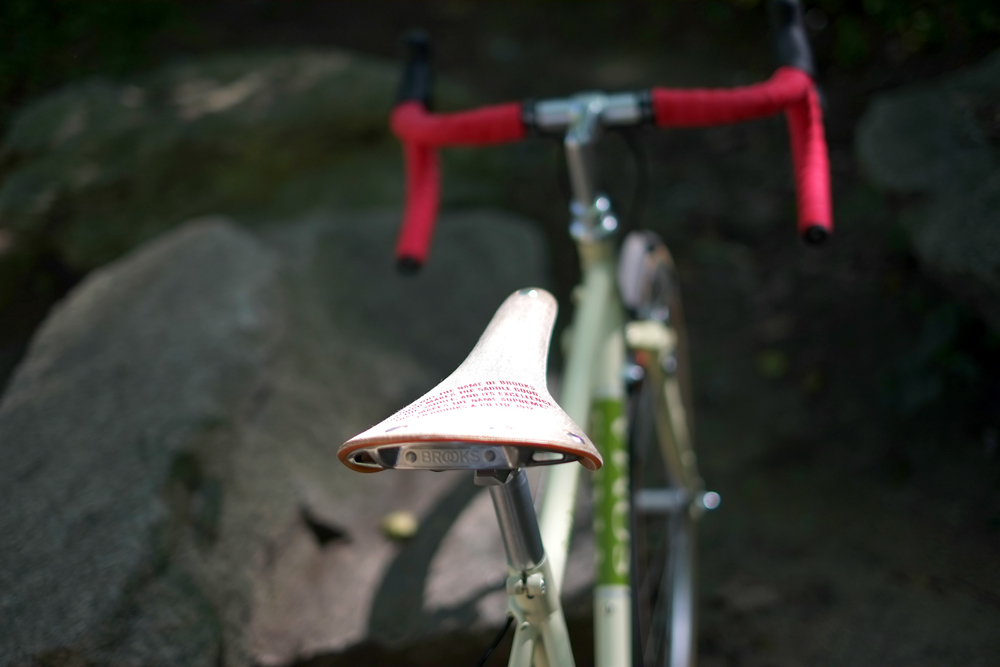 Riding this bicycle, it became immediately apparent that the first of these aspects was realised. Even without a front load, the Soma handled in the distinct manner I have come to expect of low trail bikes. There is a certain flavour, for lack of a better word, to low trail handling, and this bicycle has no shortage of it. As on other low trail bikes I own or have owned in the past, twisty tight forest trails were easier at high speeds, as was avoiding crater-sized potholes in traffic on fast descents, without losing control of the steering. In short, I will spare you the song and dance about the joys of low trail handling, except to say that this bicycle has it. What it didn't have however, was quite the same level of responsiveness to pedaling effort, or the same subtle pleasant flex, I'd grown used to in other machines of this category - including the Rawland Nordavinden on which I'd arrived to the bike shop. In fact, switching straight from the Nordavinden to the Grand Randonneur perhaps made for an unfairly cruel comparison: The former - even laden with fenders, wider tyres, a front rack, handlebar bag and dynamo lighting, had felt "lighter in motion" and springier in the fork than the pared-down machine I was now on. 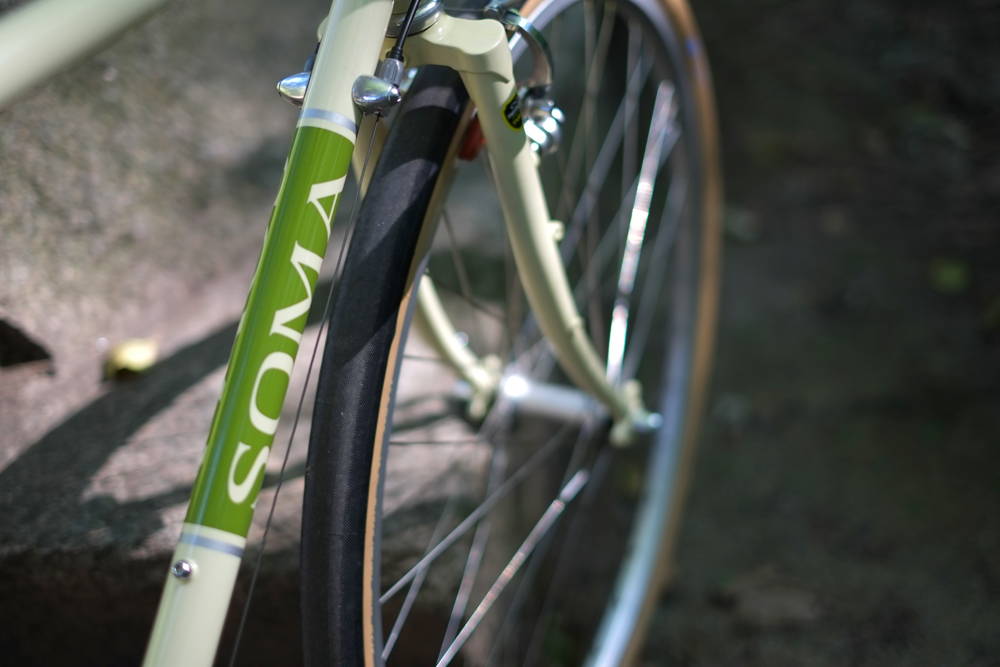 I continued to ride the Grand Randonneur through suburb and forest, and indeed enjoyed it very much. It was great fun, sturdy, comfortable, attractive - just not a performance-oriented machine. And my feeling is, a lot of people were expecting a performance machine when Soma first announced the project.

My understanding of what happened, is that Soma ended up using thicker-walled tubing for the frame, and a beefier fork, than what those of us interested in the project had originally assumed would be used. And while my former contact at Soma is no longer there to give me the details, my understanding from others in the industry is that likely this was due to the pressure of safety regulations. In fact, current manufacturing standards may make it impossible to mass-produce a frame and fork to the exact specifications suggested by the Bicycle Quarterly folk - meaning that those who want a bicycle with 7-4-7 tubing and super lightweight fork blades, may have no option other than to go custom. And while the one exception to this (as far as I am aware) used to be the Rawland Nordavinden, notably that model is no longer produced, with the model which later replaced it (which, in turn, is also no longer produced!) sporting a heavier fork and stirring up great internet drama. 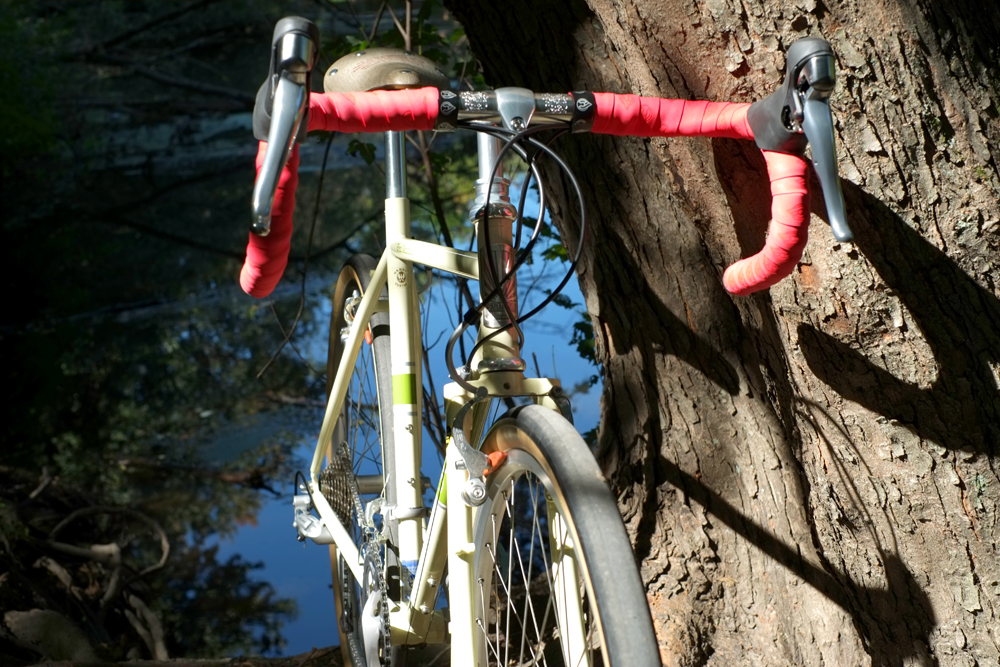 Be all that as it may, at $490 for the frameset, the Soma Grand Randonneur is a lovely, comparatively affordable low trail bicycle. If you enjoy the likes of the Soma ES, or the Surly Cross Check, and want something similar but with low trail handling, you will enjoy this bicycle very much. In my view, the Grand Randonneur is best suited for exploring, commuting, light touring, and many varieties of leisurely cycling. But if you are expecting a competition-oriented rando-bike that has tubing the thickness of tin foil and "planes" so exquisitely as to strike terror and admiration into the hearts of your ride companions, the Grand Randonneur ain't it. Know that about it in advance, and you won't be disappointed.

With thanks to Harris Cyclery for the test ride. Full picture set can be found here.
Labels: 650B bicycle reviews low trail Soma test rides