There Are "No Snakes" in Ireland. But I'm Still Holding My Breath. 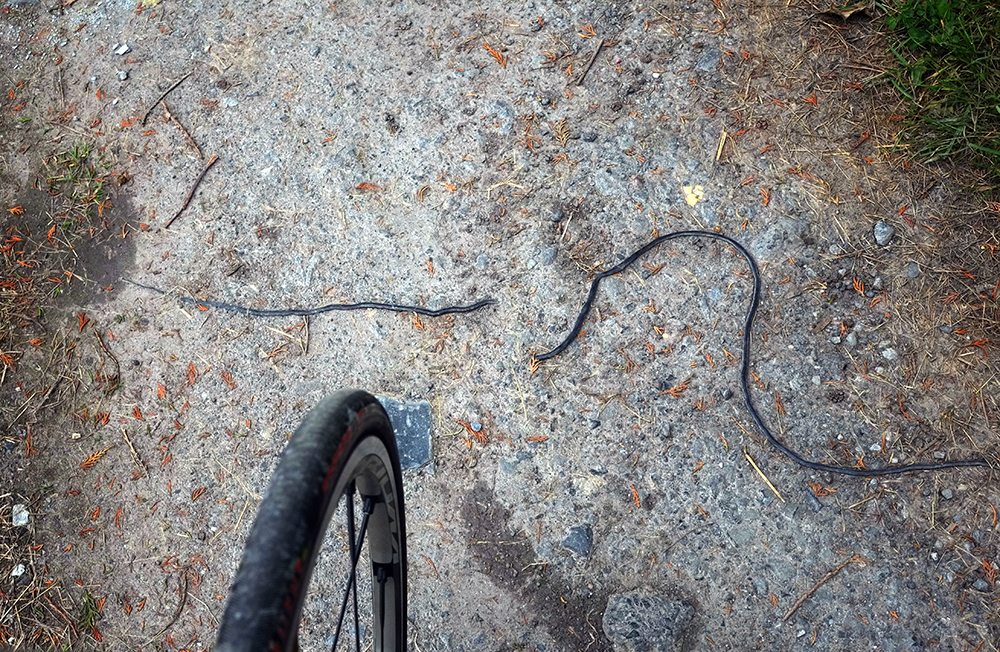 Cycling along a lovely mossy lane in northern Donegal a week or so ago, suddenly I saw in front of me a thing that made me do a double take and slam the brakes. Having come to a screeching halt with my tyre nearly upon it,  I regarded the stringy serpentine form - first with a sense of disbelief and triumph, then with relief and finally disappointment. Upon closer inspection, it was only a long, twisted tree root. But for a glorious, terror-filled moment there, I almost thought it was...

But before I could complete that thought, a loud voice out of nowhere boomed in my head.

"How many times need I tell you? There are no snakes in Ireland!"

"Sorry, what?" had been my reaction the first time I heard this assurance, given in response to my concern over walking in tall grass.

"There are no snakes in Ireland."

"How can there be no snakes?"

"Have you not heard? St. Patrick drove them out."

"Makes no odds what I think. But if you're hoping to find a snake in that grass, you'll be waiting a long time. There are no snakes in Ireland you see. Sure look it up yourself if you don't believe me."

So look it up I did. And while that fascinating Englishman St. Patrick played no role in its banishment, the snake's progress toward the Emerald Isle had apparently been thwarted to begin with by a combination of geographical and evolutionary forces tens of thousands of years ago. In other words, there were never snakes in Ireland (or Iceland, or New Zealand) in the first place, it would seem.

You will forgive me, however, if I remain just a tiny bit skeptical. Because you see, I have already been through this song and dance before. The last time, it had to do with mosquitoes.

On my first visit here, I remarked on the complete and utter absence of insect screens on the windows, doors and porches of Irish houses.

"We could never just open the windows like that in New England," I said, with some envy. "The mosquitoes would eat us alive."

"Oh how terrible. What a wild place that America must be, after all. But you needn't worry about that here. We don't have mosquitoes."

Well, if the no snakes thing turned out to be true, I thought, why not. And I opened the windows wide to let in the lovely summer air, scented with freshly cut grass.

Later that evening I walked into my bedroom and turned on the light to behold a terrifying sight. On the wall, right above my bed, sprawled a monstrous creature which I can only describe as a sneering, gigantic - and I am talking fist-sized here - mosquito. Suppressing a scream, I backed out of the room and entered the living room, where my hosts (I was staying with friends at the time) were blithely watching a motorbike race on tv, oblivious to the horror show unfolding under their very roof.

"Pardon me," I said, not wishing to sound alarmist.  "But could you just come and have a look at something in my room for a moment?"

Made curious by my pallid and wide-eyed face, they arose and joined me eagerly. The grotesque thing had not moved from the wall, and was in fact now joined by an even larger, more menacing-looking companion. Silently, I pointed at their horrific frolic.

"You said there were no mosquitos!"

From the unconcerned look on their faces, I nearly thought I had hallucinated the giant insects hovering above my bed. But finally, they seemed to realise what troubled me.

"Ach! You mean those Daddy Long Legs there?"

"Is that what you call those oversized mosquitos on the wall?"

"Why, sure they're not mosquitoes. They're harmless."

"Harmless! You mean to say those... things don't bite?"

"Not at all! Not humans they don't. Sure you can swat at them with a cloth if they frighten you. Or just leave them be; they'll do you no harm the poor buggers."

Just in case, I destroyed them - then tightly closed the curtains over my window and lay in the dark trying to forget the experience. But forgetting was not in the cards: In the morning, I opened my eyes to see another one of them on the ceiling and a couple more in the corner. However, my skin - which is normally ravaged by any hint of mosquitular presence - was free of bites. And so at length I came to trust in the creatures' harmlessness.

I had nearly put the issue of mosquitos behind me, until, some time later, I ventured out on a day-long cycle ride over the Sperrin Mountains. It was my first time out there and the scenery was beautiful; I made frequent stops along the magical forest roads and took lots of photos. The day was a warm and sticky one, windless, the air thick with humidity. Having cycled a good few miles over the mountains and back, I retuned late in the evening and collapsed straight to sleep with tiredness. The following morning I got up early, wakened by the unpleasant sensation of my entire body covered with tiny, itchy, pus-oozing bumps. I pulled back the covers to discover myself covered with what not only felt like, but also clearly looked like, hundreds of mosquito bites. Haphazard in places, in other spots the bites formed impressive patterns. The flesh which had been peeking out between my 3/4 tights and socks, for instance, was covered with the bites so densely that it appeared I wore ankle bracelets. Stunned by this state of affairs, I was't sure what to think just yet. And the strange thing was,  I had not even noticed any mosquitos during my cycling excursion.

"Ach look at that!" My friends exclaimed when I made my public appearance. "The midges got a hold of you, so they did!"

A wave of emotion washed over me, like a rage tampered with exhaustion.

"The midges, you poor thing! Place is full of them this time of year."

Later I looked it up. While technically not the same species as a mosquito, a midge pretty much does the same thing a mosquito does - including thriving in similar conditions and leaving a similar type of bite. Funny how no one saw fit to mention them to me, in the midst of all the "no mosquitos here!" assurances.

Well, as the saying goes, once bitten, twice shy. So multiply that by a hundred, and perhaps you understand now why I'm just a little suspicious of "There are no snakes in Ireland." One of these days, I fully expect to be cycling home only to be snatched off my bike by a 6-foot ophidian darting out from behind some foliage. And should I manage to wrestle it off me and avoid its sprays of poison, then limp back to my bike and, trembling, broken-boned, and half-mad with shock, pedal to safety to the nearest town - I will then tell my tale in between blood-gurgling spasms only to be met with a nonchalant wave of the hand and a hearty laugh.

"Ach that! Why that's not a snake, silly girl. That's a slithereen. Or perhaps it was a bendy-snatcher you've been unfortunate enough to come across. Place is teeming with them this time of year. Not to worry but. Because one thing you can be sure about: There are no snakes in Ireland."
Labels: animals comfort Ireland stories