Bikes for Extremely Windy Conditions? Some Suggestions to Consider 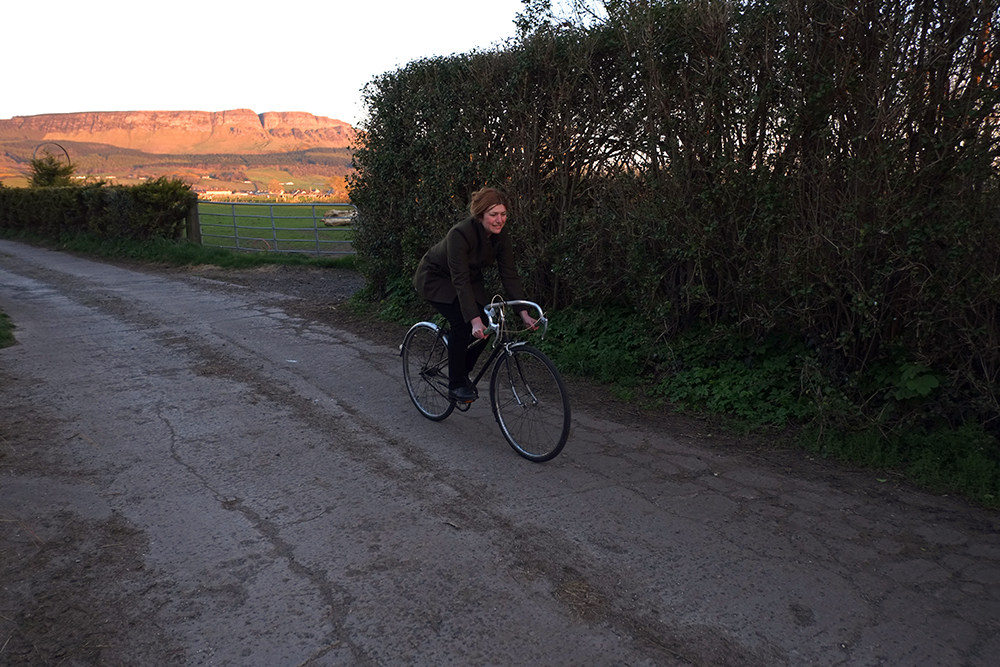 By now you may have grown used to my occasional laments about the very strong winds in this corner of Ireland. And lest you be tempted to roll your eyes at how easily I complain about mere trifles, I am not talking about normal winds here. I'm talking wind speeds of over 20mph, with 40mph+ gusts. That's severe weather warning territory! And if you've ever tried to cycle in those conditions without the benefit of being sheltered in a group, then you know it can be next to impossible.

Cycling into a headwind of 27mph, my speed slows to a snail's pace and trips into town take twice as long as they usually do at double the effort. But the real terror is when the wind comes in from the side - especially in gusts strong enough to push me off the road or into moving traffic. During my first year here, despite braving winds more than I thought myself capable of, I still spent many days off the bike during the worst of it; it just didn't feel safe.

My second year here, the windiness factor did not improve any. But as the number of bicycles at my disposal increased, I began to notice that some of them faired better in windy conditions than others. For instance: I noticed that my 650B fat-tire roadbke - which in most other ways is outperformed by my lighter skinny tire roadbike - was far less prone to being moved sideways by gusts. Switching to it during stretches of windy weather allowed me to put in more road miles than had previously been possible. But the bike that really takes the cake in this regard is the 80-year old heap of a mixte I have on perma-loan from a  friend (pictured above), which feels as if it plows through headwinds with less effort than my other bicycles, while remaining almost indifferent to sideway gusts. Having become my windy-day transportation bike, it has expanded my travel radius - and comfort - in what is otherwise "impossible" weather.

Having tried to find patterns between various bicycles' characteristics and how they handle in extremely windy conditions, my success has been limited. Most obvious is that a low rider position is better in headwinds. And that bikes with some weight to them (or just the wheels?) are better in resisting crosswind gusts. Other than that, I don't really have enough data to go on - or enough expertise to make deductions, for that matter. Nevertheless, I am curious. So I approached a few bikey folks with some experience in this matter and asked what they thought. I had expected their responses to be more or less similar, allowing for a general picture to emerge. Did it? Well, read for yourself!

Mariposa Bicycles are a Canadian builder specialising in road, touring and randonneuring machines since 1969:


The higher up the cyclist sits the more he/she will be affected by the wind and a poorly positioned cyclist will have a harder time handling the bicycle, especially in extreme conditions.

The front wheel should have weight on it - [the rider] should not be sitting too far back in the saddle, with little weight over the front end, as the bicycle will be harder to control in a strong cross wind. Rims should present the smallest surface to side winds. Deep rims, especially the front, make the bike unstable in cross winds.

When touring with panniers on low-riders and other bags, the weight should be as low as possible on the bike and the load well balanced. As the cyclist can easily become a sail in high winds, properly fitting clothing will also make a significant difference.


Mike Flanigan of ANT is a Boston-based builder of transportation and touring bicycles, as well as a welder at Seven Cycles:


If I were building a bicycle specific to being used for [transportation in] windy conditions I would incorporate high trail geometry, not so light frame - if even heavy, tri-spoke aero wheels, rear loading rack with small panniers, and low-set upright handlebars.

The bike being heavy overall would really help with stabilizing the ride. I would also oversize the tubing to stiffen up the frame to resist twisting. Bars [should be] low enough to keep weight on the front end. The tri spoke wheels are an obvious choice, even if ugly. Loading in the rear of the bike is a better option, as a front rack and or basket will catch a lot of resistance with gust.


Jan Heine is a Seattle-based publisher of Bicycle Quarterly, an owner of Rene Herse Cycles and Compass Bicycles, and an experienced randonneur:


For handling low-trail geometry makes a huge difference, because then the whole bike gets pushed sideways without deviating from its course. As Tony Foale, the motorcycle handling wizard, pointed out, trail acts as a lever for the wind to turn your handlebars. The more trail you have, the more the bike will veer off-course when hit by a gust of crosswind.

For riding into headwinds, you obviously want a bike that has the right flex characteristics to work with your pedal strokes. That makes it less fatiguing to put out the power required to keep going into the wind.


Todd Fahrner is an owner of the transportation-focused Clever Cycles in Portland Oregon and an experienced bicycle tourist:


Get a very heavy bike with big heavy wheels. Dutch models aren't bad. Like an icebreaker, these resist buffeting through sheer mass. Equip the Dutch bike with aerobars.

[Failing that] get a fully-faired recumbent velomobile... Bromptons are good too as you can get into another vehicle with no fuss.

Indeed! Better yet, will the Brompton fit into the velomobile?

Silliness aside, the above suggestions - despite some very different recommendations as to wheels and tubing - do share some common elements. Basically in extremely windy conditions you want a bike that is "planted" enough to resist gusts, that responds well to your pedaling efforts under strain, and that positions you (and your luggage) in such a way as to minimise wind resistance. No doubt there is more than one way in which such a machine can be achieved. And with its heavy old wheels, compact frame and ultra-low deep drop bar positioning, my ancient Claud Butler mixte might just have tapped into one of them.

Then again, perhaps the most sensible piece of advice on the topic of riding in windy conditions comes from Todd Farhner after all: "Always arrange for the wind to come from your back, adjusting your destination or schedule as required."
Labels: bike fit comfort commentary framebuilders wind