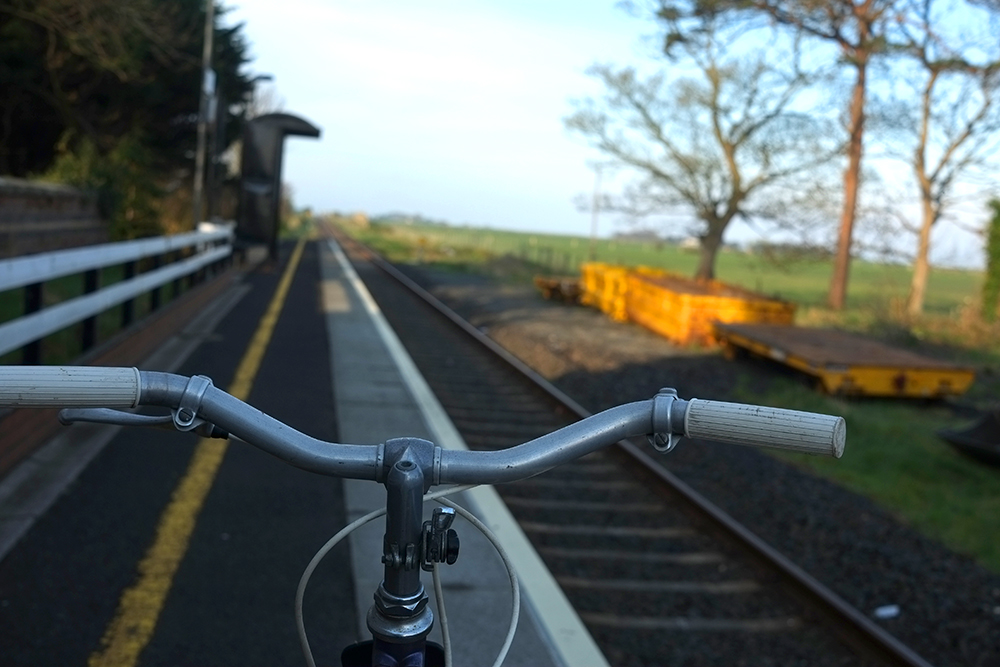 The train was moving quickly, the blues and greens and yellows of the landscape blurring and running into one another in the glare of the morning sun. The diminishing mountain in the distance resembled now a flat brown cutout, sitting dull and static beyond the shimmer of the jagged marshy shore. In the corner fold-down seat I was fenced in by my bicycle resting against me on a diagonal. This created a sense of being in a tiny private compartment - just me, the bike, and the window with its views of endless grass and water. My fingers began to tap on the handlebars to the train's rhythm, as the lyrics to that exuberant '80s gem Voyage-Voyage popped into my head. All things considered, it was not a bad start to a long day.

One reason I am able to live in this rather remote corner of the world comfortably with only my bicycle for transportation, is that my travel radius is normally quite small. So when a series of personal events last week meant I'd have to dart around the country and beyond, I experienced a brief moment of panic, of the "How will I do this without a car?!" variety. 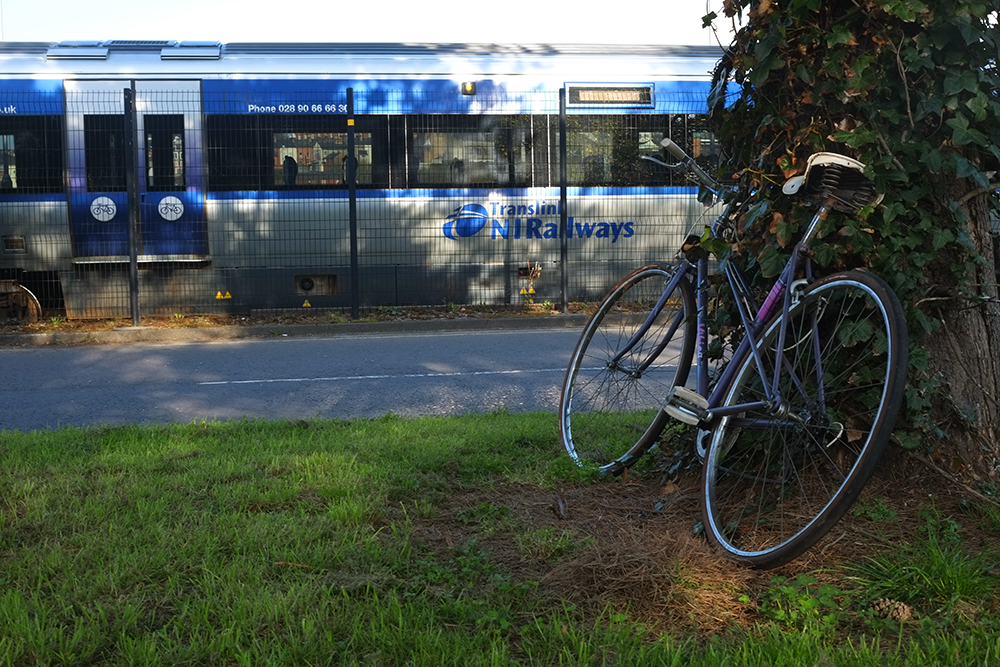 But after some initial hand-wringing, I optimistically reframed the situation as an opportunity to try out some variations of multimodal travel. After all, I live less than a mile from a bus station and within easy cycling distance from a train station. But how realistic is it to get around in Ireland via public transport - especially when you've got to be at specific places at specific times? As I already knew, but confirmed once again in the course of this hectic week: A lot depends on where you want to go. 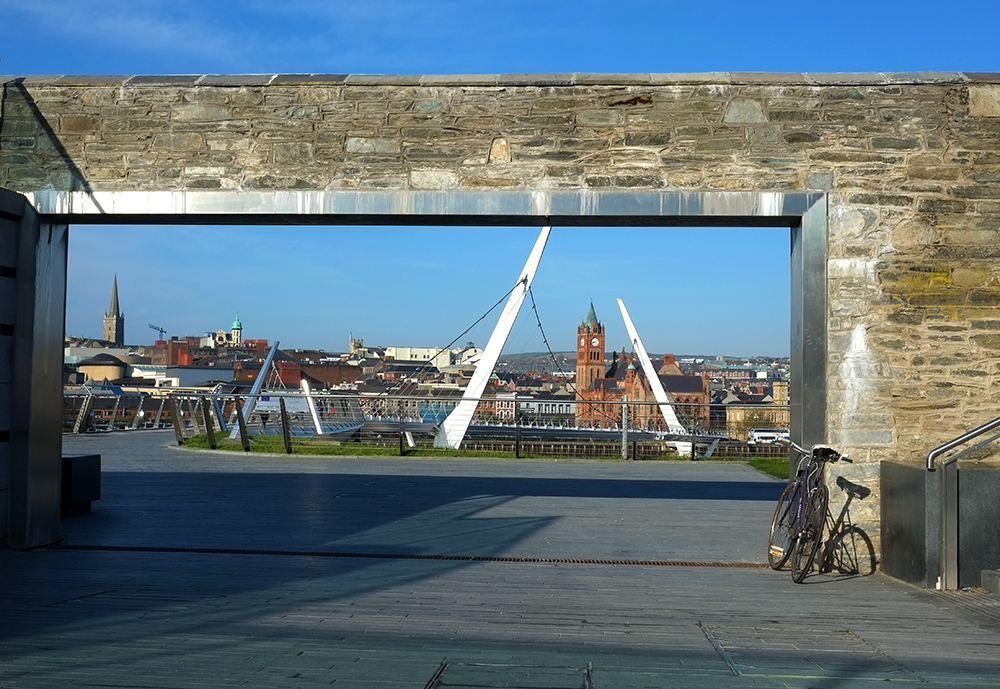 Getting to major cities - namely, Derry, Belfast and Dublin - is actually pretty painless. All I have to do is cycle to my local train station, pay for the ticket and submit myself to what is usually a rather scenic and relaxing journey. The trains mostly arrive on time, run with reasonable frequency, and allow bicycles on board. And even though in theory there is a limit to how many bikes each train is allowed to accept, in my experience this rule is not enforced. So even though I own a folding bike, if I want to bring a full sized bicycle on the train for whatever reason, it is not a problem. Even if I had to travel to Belfast or Dublin on a regular basis (as many people here do), I would prefer bicycle+train to car. The journey by train takes about the same time as by car, but allows me to use the time more productively, since on the train I can read and do a bit of work. 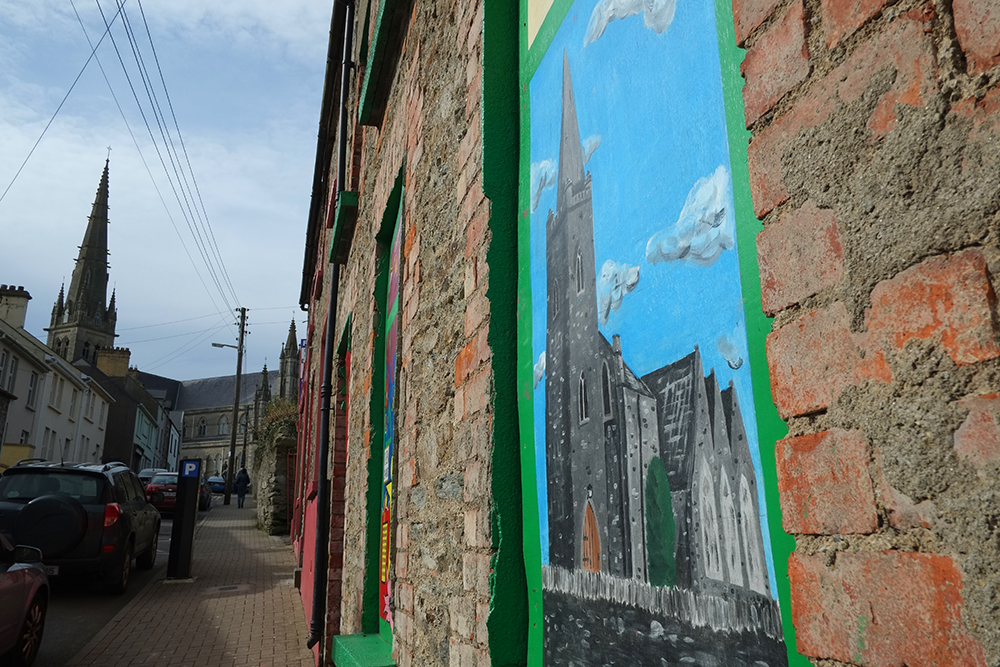 More problematic are trips to places that are not along the train routes. The bus networks in Ireland, North and South, are actually quite good. But as in most places, there is often no direct way to get from point A to Point B if both points are off the beaten track. For instance, although there is a bus stop walking distance from my house, this bus only goes as far as the nearest market town. From there, I would then need to make an epic series of transfers to reach a similar type of market town elsewhere.

Just how epic, I learned when I tried to travel by bus to Letterkenny - a fairly large and central town in neighbouring County Donegal a mere 50 miles away. Starting from my local bus station, it took me no less than 3 transfers to reach my destination! It was the sort of situation where a car really would have been more efficient, no way around that. But since I didn't have a car, and would have to visit Letterkenny again in the near future, I decided to at least improve my journey next time - because doing 6 (total) bus rides in one day again was out of the question! 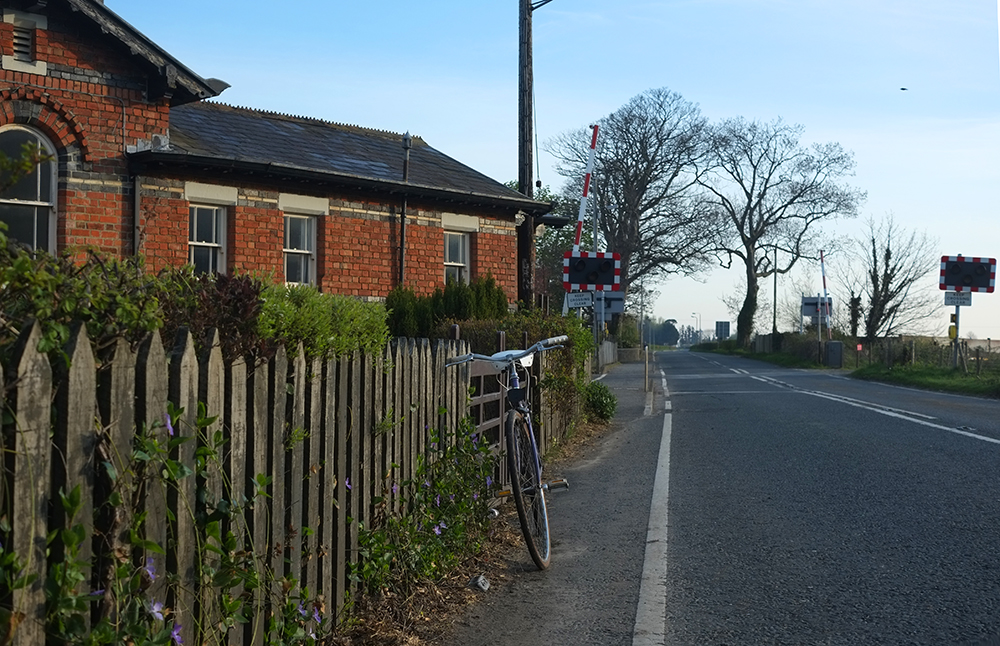 Aside from the fact that this trip took about half the time of the walk+bus journey, I preferred it because cycling in the fresh air in between being inside vehicles made me feel a lot better physically.

It was also kind of cool to realise the full potential of the bicycle as a multimodal tool. The bicycle can do more than just serve as a means of getting to and from the train station. It can also be used to link up journeys that may otherwise be impossible or inconvenient to combine, expanding the usefulness of available public transportations options exponentially. 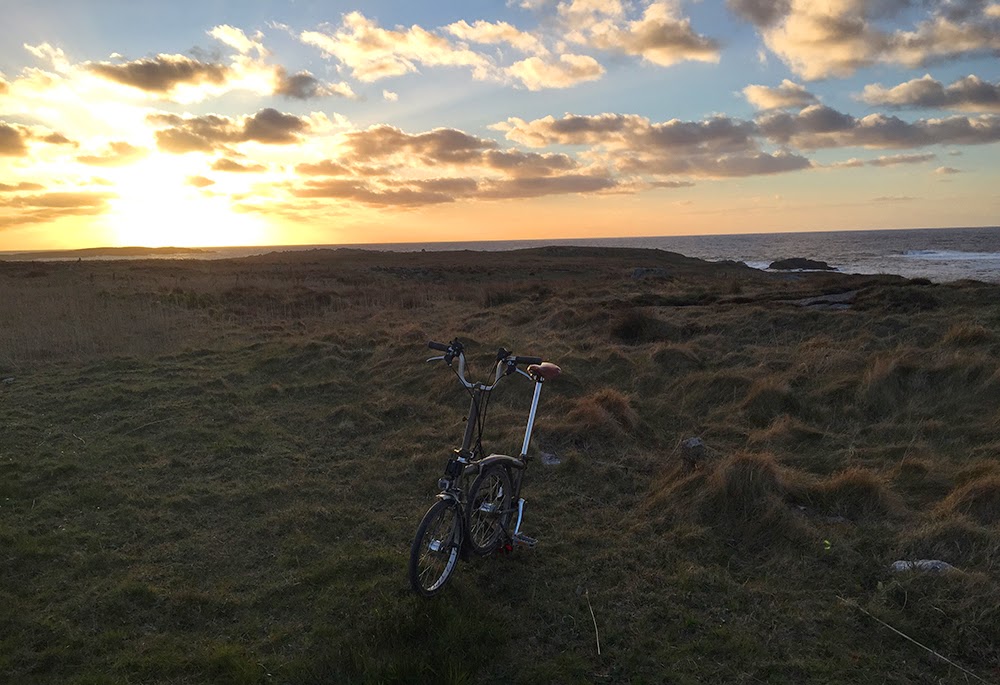 Having become aware of this, I grew bold in my planning. I began to derive satisfaction out of cleverly combining transport modes to minimise bus transfers. When I had time to waste in between transfers, I explored places I would not otherwise have ever had cause to visit. What I thought would be a week of hellish travel became instead... well no, it was still that. But at least I'd made a game of it that made it easier to cope with.

Among other factors, I experimented with whether I preferred to bring my folding bike and have it with me at all times, or a full-sized bike that I could lock up and leave at the bus station before the final leg of a journey. Sometimes I found the latter option worked better, especially if my final destination was the sort where I would not need my bike, so that having one would be more of a hindrance than a help. 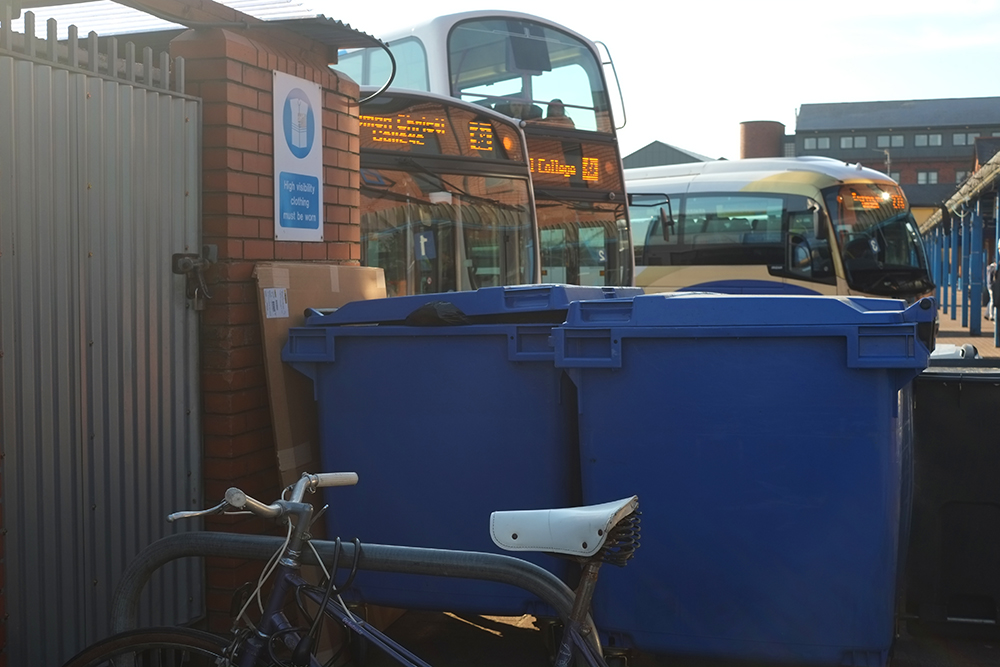 Having locked up my old and somewhat cruddy looking Viking behind the bus station in Derry one day, I returned to it several hours later to find it being examined enthusiastically by a couple of bus drivers on their smoke break.

"I was just after slagging that bike," said one of them cheerfully as I leaned to unlock it.
"What, don't you like it?"
"Couldn't pay me to steal that thing!"
"I think that's the idea, mate" chuckled his friend. 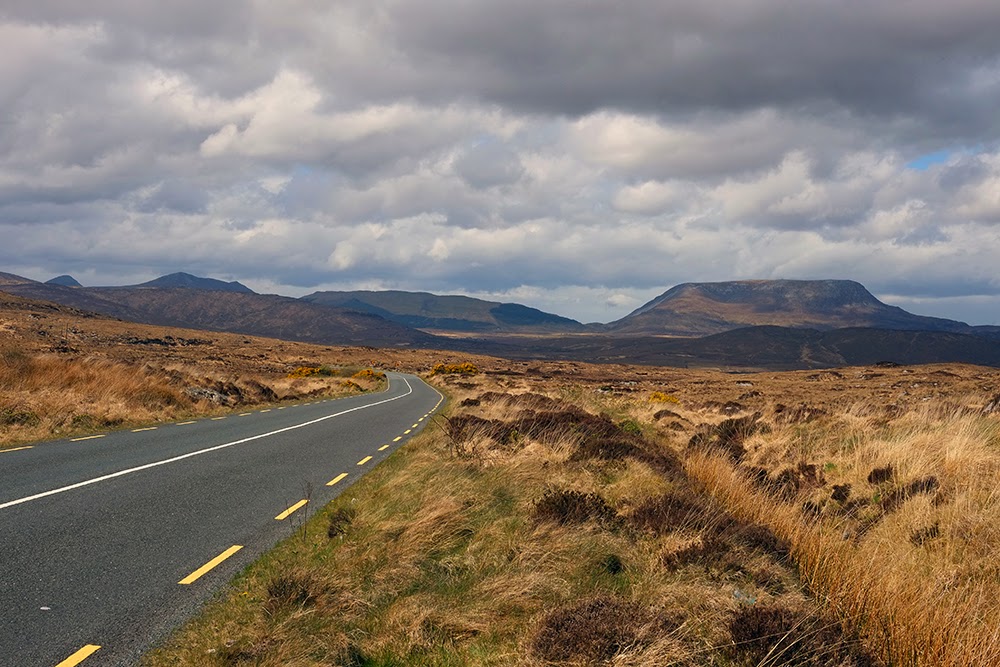 Later I learned that I can actually take a full sized bicycle on the bus with me. Though I suspect this policy is informal, they allow you to plop it right into the luggage compartment apparently, where it can lay napping on its side on top of all the suitcases. I was on a bus with the final destination of Galway when I was told this, and although I had no intention of going that far, for a moment I imagined it and marveled at the myriad of possibilities in front of me.

Just then, the echoey voice of Desireless crooned "voyage-voyage, eternellement..." into my ear again - as if to entice me to pedal through this endless boggy wilderness in a silver lamé dress and blue eyeliner to the sounds of electronic keyboard; as if to say, "You see? You got everything done and survived without a car after all. Voyages-voyages... multimodaux."
Labels: transportation options travel