Seeing Sense in Local Manufacture: the Story of a Bike Light Made in Northern Ireland 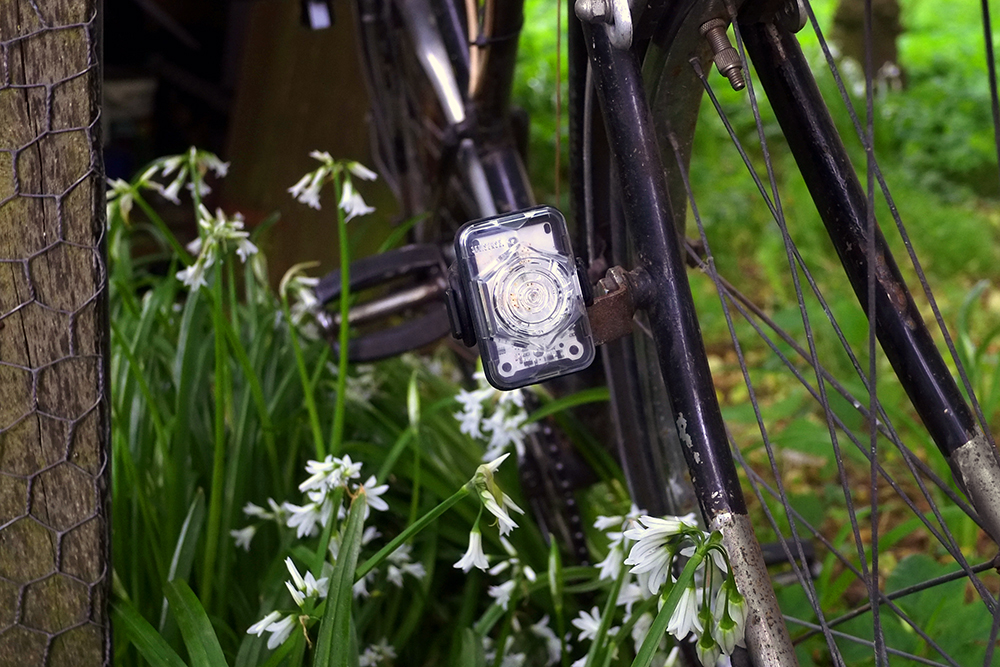 So I'm riding around with these funky little high-tech lights on my bike from the Northern Ireland startup called See.Sense (see what I did with the blogpost title there?). The lights are rechargeable, feather-light, preternaturally bright, weatherproof, "intelligent," motion-programmable, and easy to attach to almost any bicycle, thanks to the magically stretchy and very secure rubber straps. Naturally, I attached these futuristic little darlings to the oldest bicycle in my possession. The front light looks surprisingly at home on its ancient fork-mounted headlight bracket! 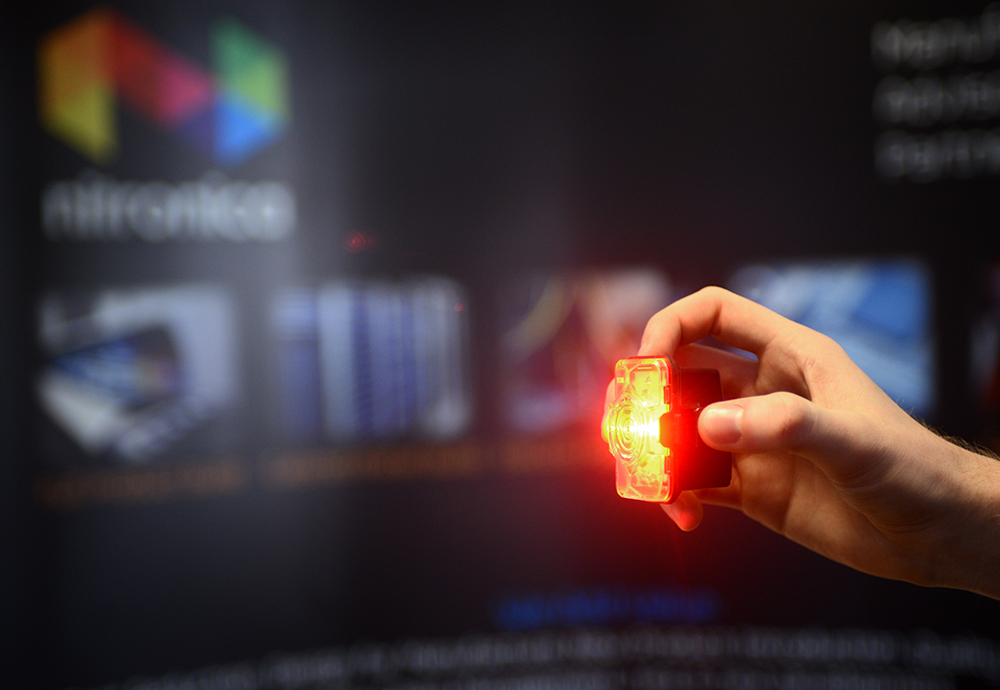 I will say right off the bat that I am not the target market for these lights. Designed primarily for visibility (as opposed to illuminating one's path) and optimised to run in flash-mode, See.Sense lights are intended for urban commuters, for roadies who outstay the sunset, for cyclists looking to increase their daytime sparkle, or otherwise to be used as supplementary lighting. Me, I'm a "light up the road" kind of gal. And personally, I think flash mode should be outlawed (ducks, runs). Nevertheless, I still think these lights are darn cool and I can see why so many local cyclists are going nuts over them. 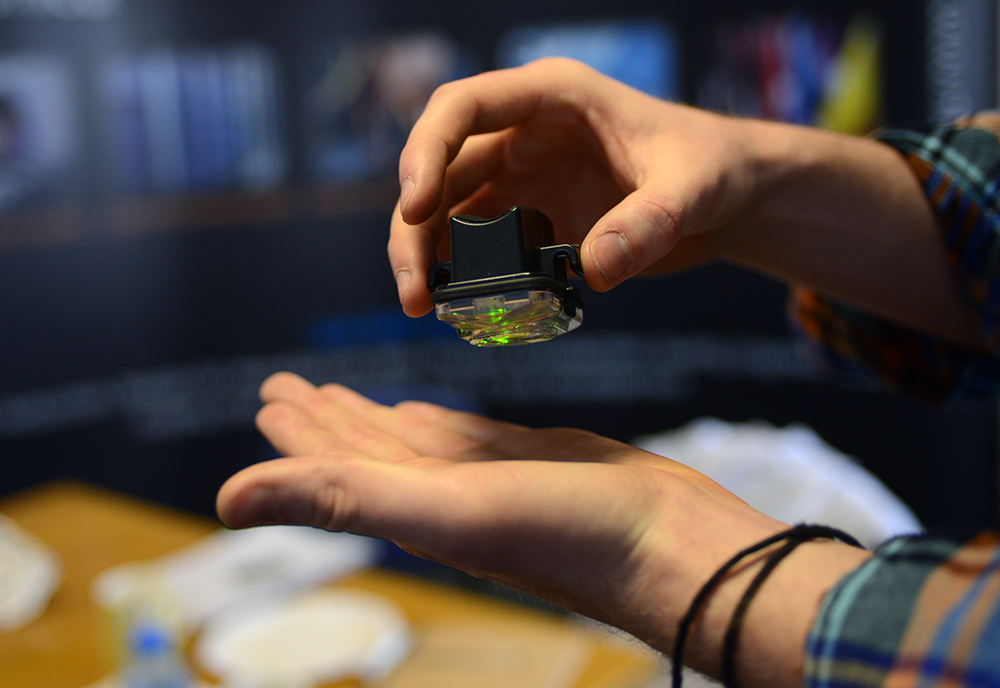 An absolute dream for gadget lovers, See.Sense lights have no on/off switch, or any switch at all for that matter. Instead, the lights activate via motion gestures. 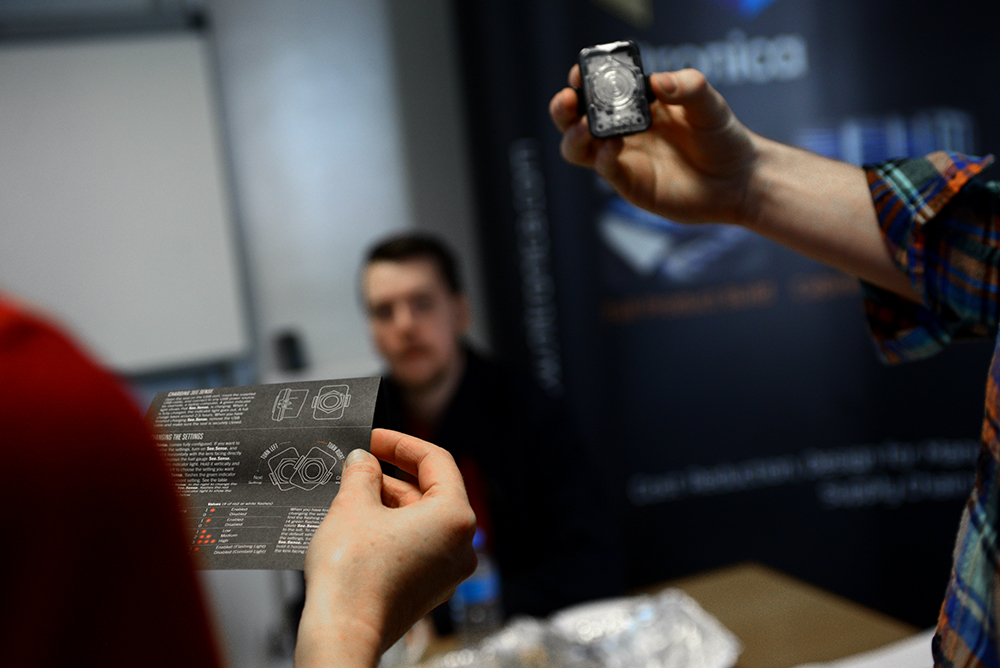 These motion gestures are also used to program settings, making each light highly customisable. Features such as power output level, flash vs steady mode, motion sensing, and reactivity to light, can all be adjusted via a sequence of left/right rotations.

See.Sense lights are built with Fresnel lens elements to maximise angles of visibility, making the beam visible from the sides. And if that wasn't enough, the lights "continually monitor motion, orientation and light," responding to "road conditions - junctions, roundabouts, filtering in traffic, approaching headlights and more." The lights also react to the bike's orientation and speed. And an auto-standby feature puts them to sleep after 3 minutes of inactivity, activating them again when the bicycle is in motion. 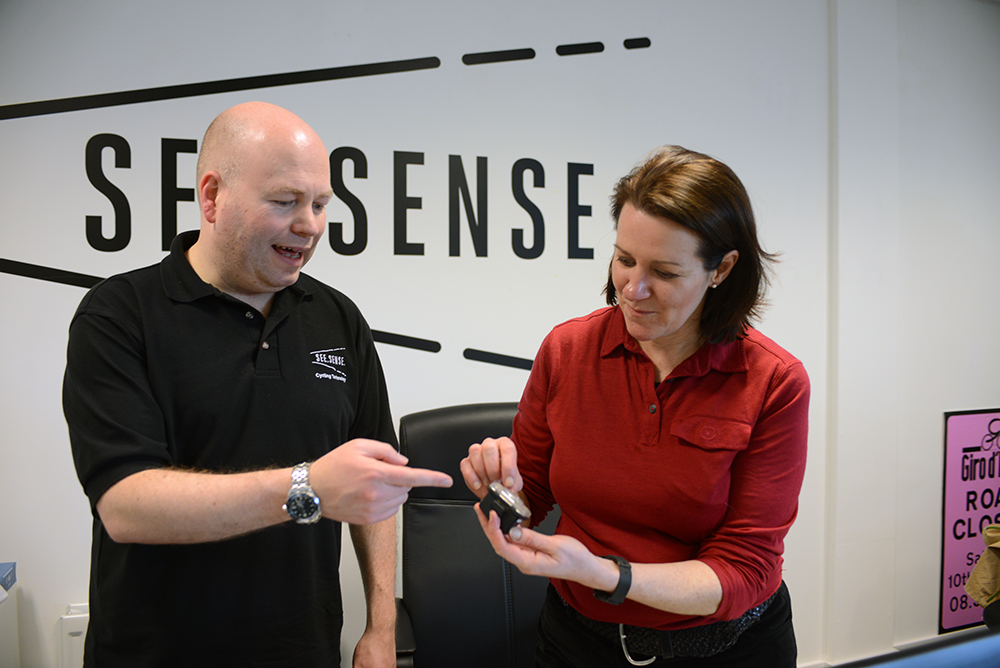 Now, whether all of this sounds awesome or makes you want to plead for a simple on/off switch, probably depends on where you stand on the tech-loving spectrum. But for those who belong to the former category, I daresay at £80 per set the See.Sense lights are not a bad deal at all - considering all the features designed into them. And considering that they are locally made. 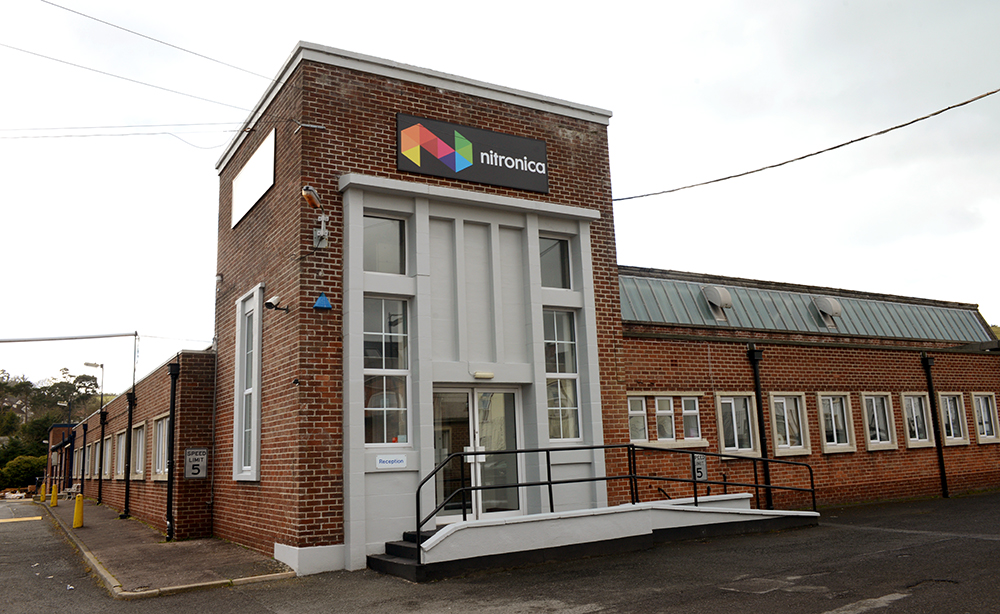 It was this aspect of See.Sense that intrigued me and made me want to pay them a visit. Northern Ireland is not exactly bustling with industry, making outsourcing the obvious choice for most NI-based inventors and designers. How then did this small, fledgling company manage to get a niche product such as bicycle lights produced locally?

The answer is NItronica. Located on an industrial site in the otherwise rural Ballynahinch, it is just 15 miles from the See.Sense office in Newtonards. Both locations are fairly close to the outskirts of Belfast. 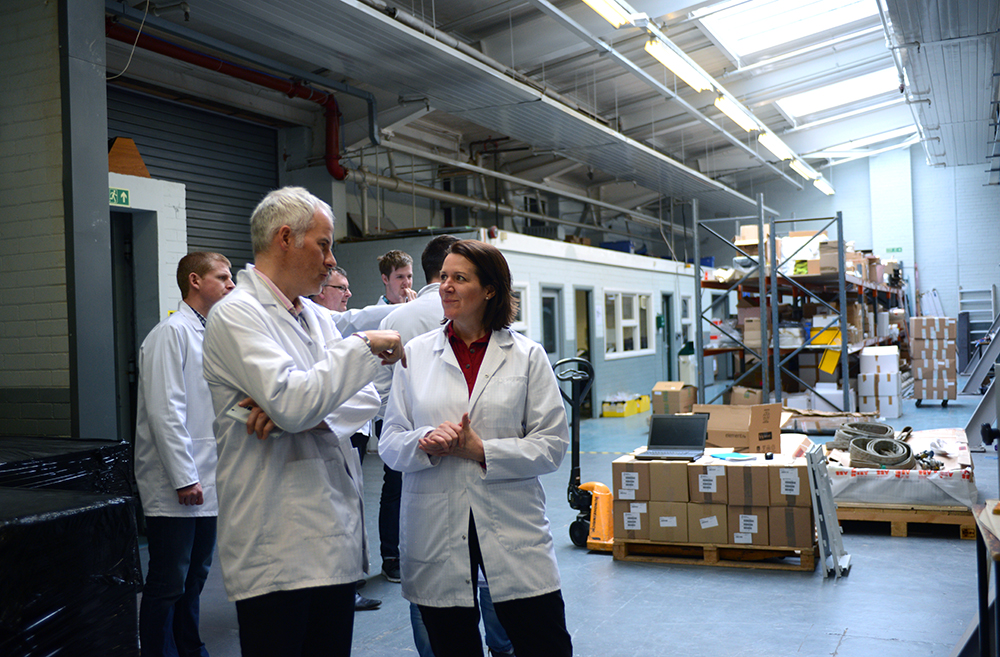 When I asked whether I could visit the factory to see how their lights are made, Irene and Philip of See.Sense agreed in the sort of casual, lighthearted manner that made me envision I would be dropping by and taking some snaps, with no one paying me any mind. But as the visit drew nearer, planning grew more elaborate - so that in the end, the visit took on the formal and exciting feel of a government delegation, complete with tea, sandwiches, a presentation and a tour.

Rather than sneaking around incognito, I was part of a group that included cycling wonder-coach Dave Smith (aka ffflow), and a group of brand-new employees and interns at See.Sense who had yet to visit the factory. 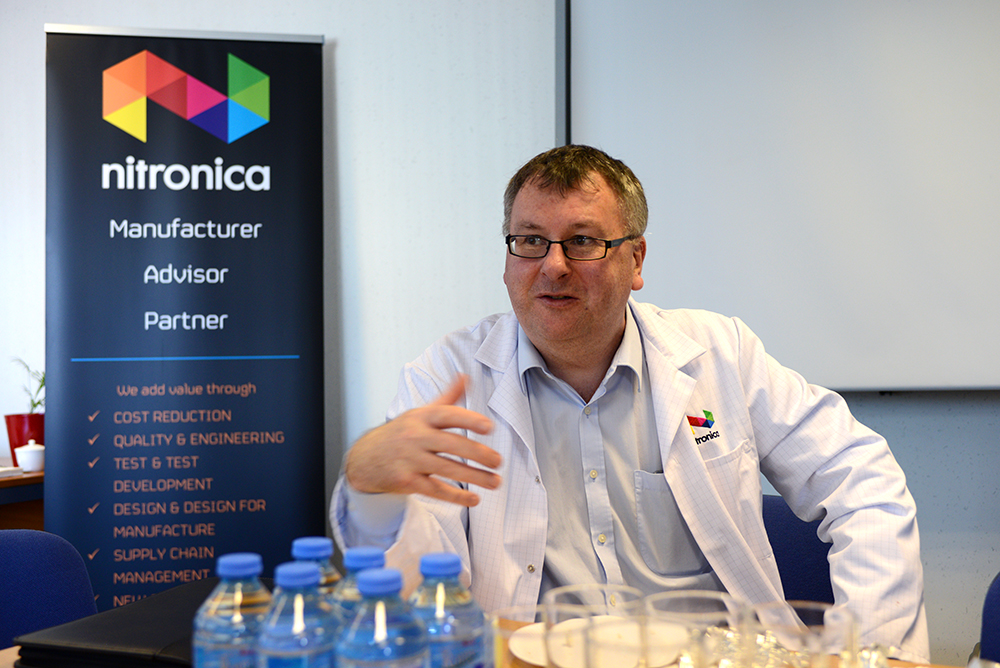 In the first instance we were treated to an interesting talk about the factory's manufacturing practices and history. NItronica as it is known today came into existence in 2002, when some former employees bought out the failing telecommunications company Viassistance that had occupied the site for decades prior. 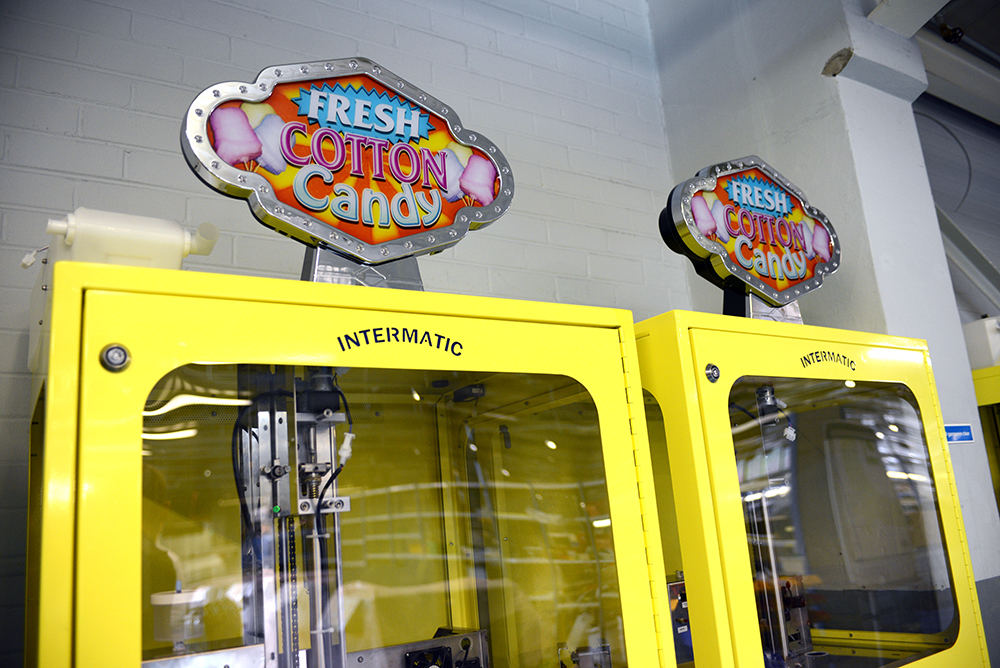 Specialising in the manufacture of electronics, the range of products NItronica are capable of producing is surprisingly diverse - from cotton candy machines, 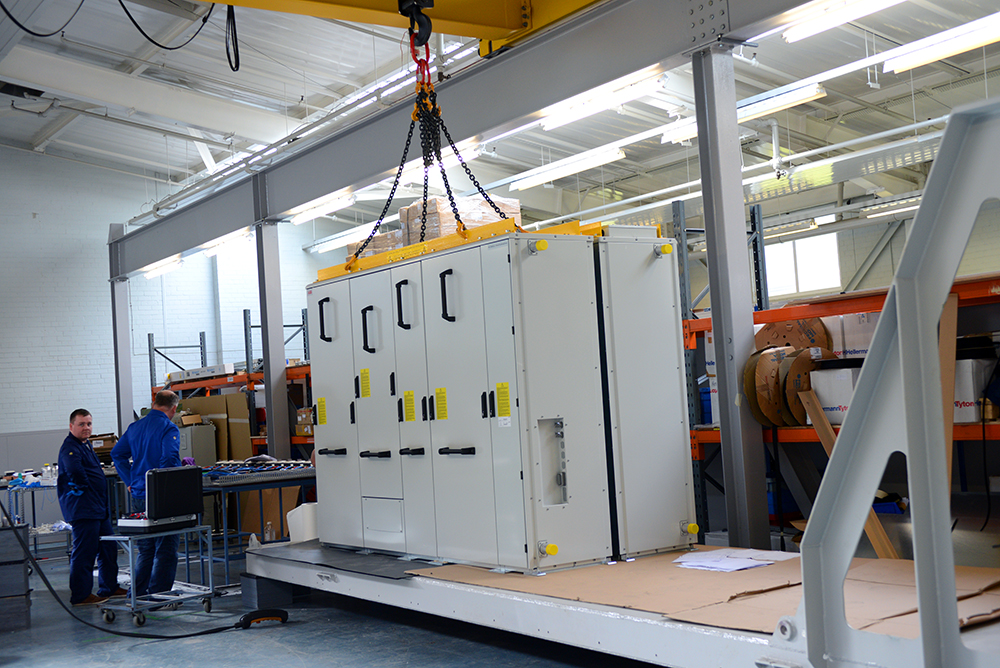 to parts for underwater turbines, 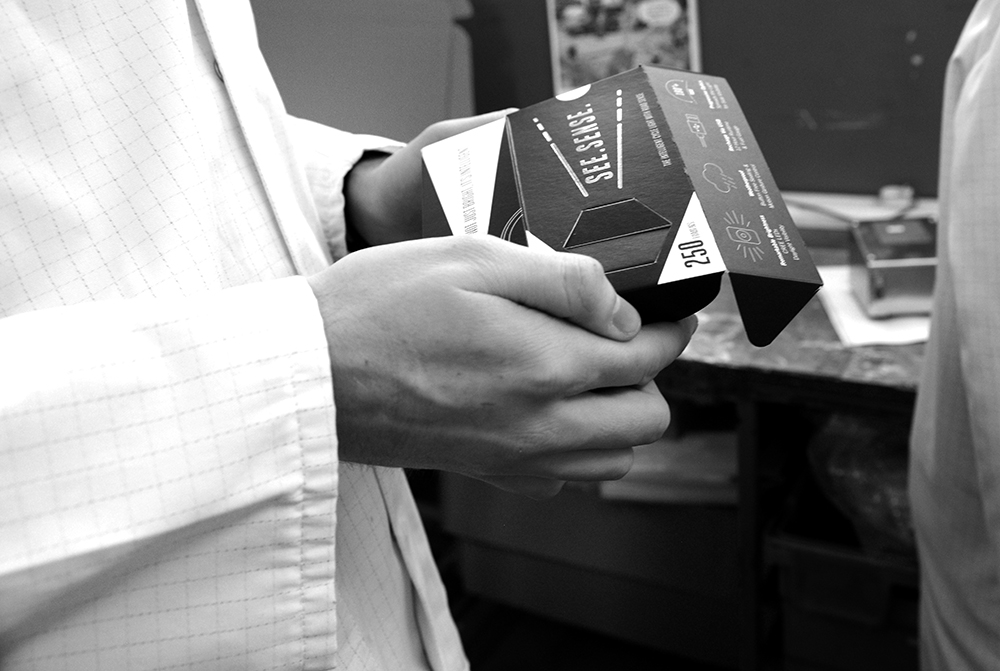 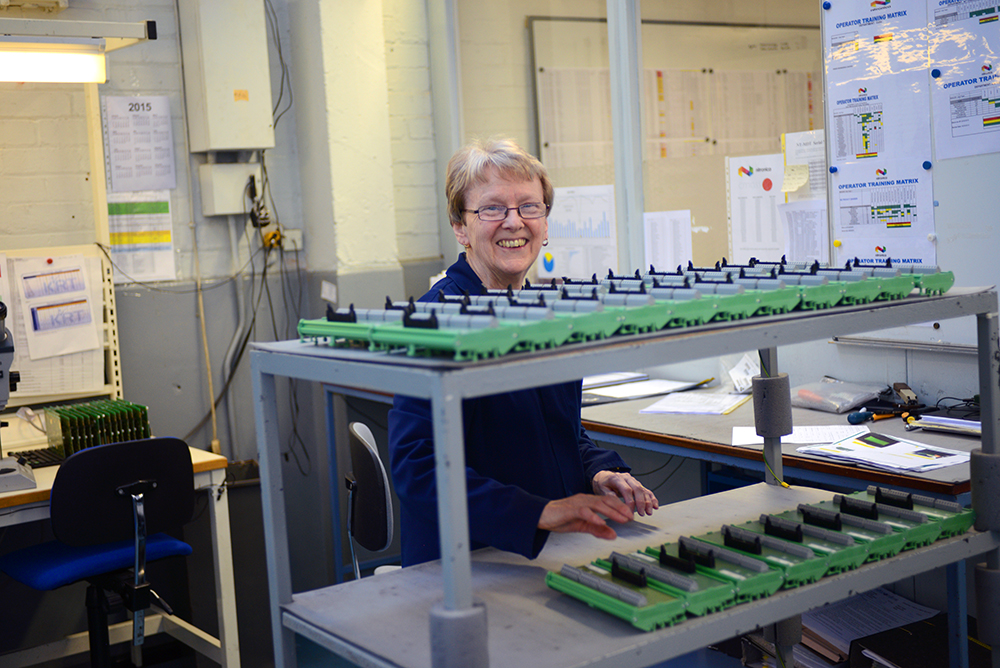 Business proved successful, and NItronica now have many clients throughout the UK and Ireland, continental Europe, and some even further afield. 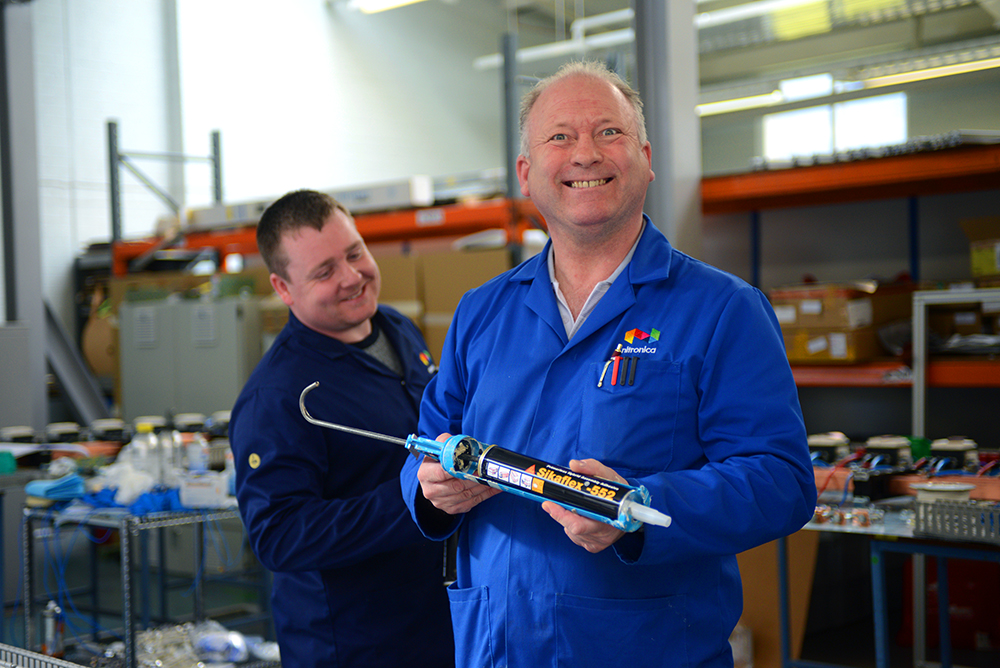 At the moment, NItronica employs a staff of 135, a good portion of whom we had a chance to meet and briefly speak to. 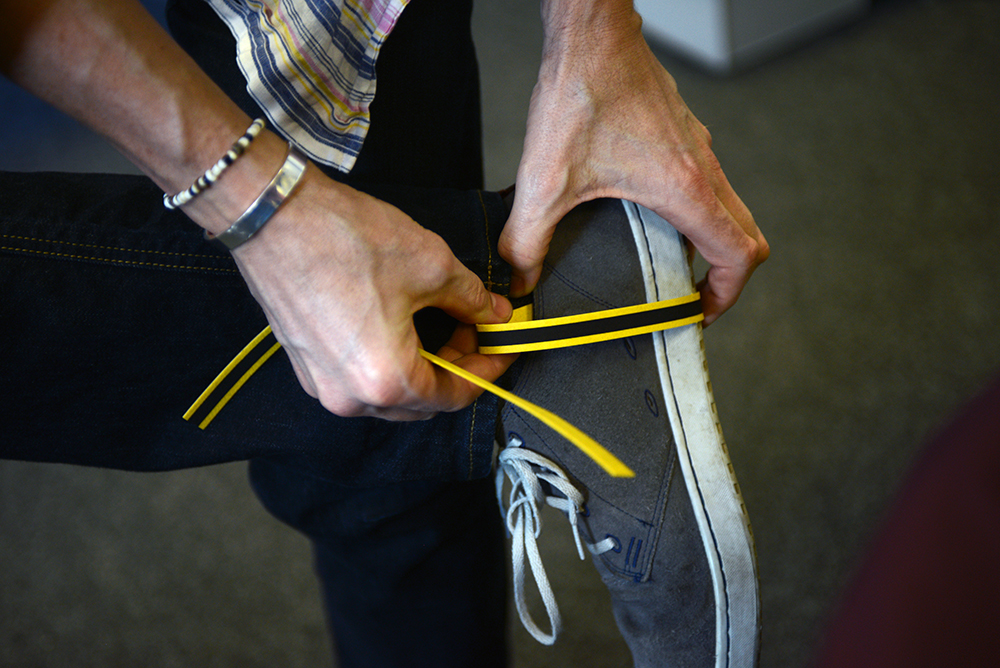 But before we did any of that, we were required to go through the rather exciting process of donning white lab coats and strapping heel grounders onto our shoes. We then took turns going through an electrostatic discharge tester to ensure the grounders were working properly, before finally being let loose onto the factory floor. 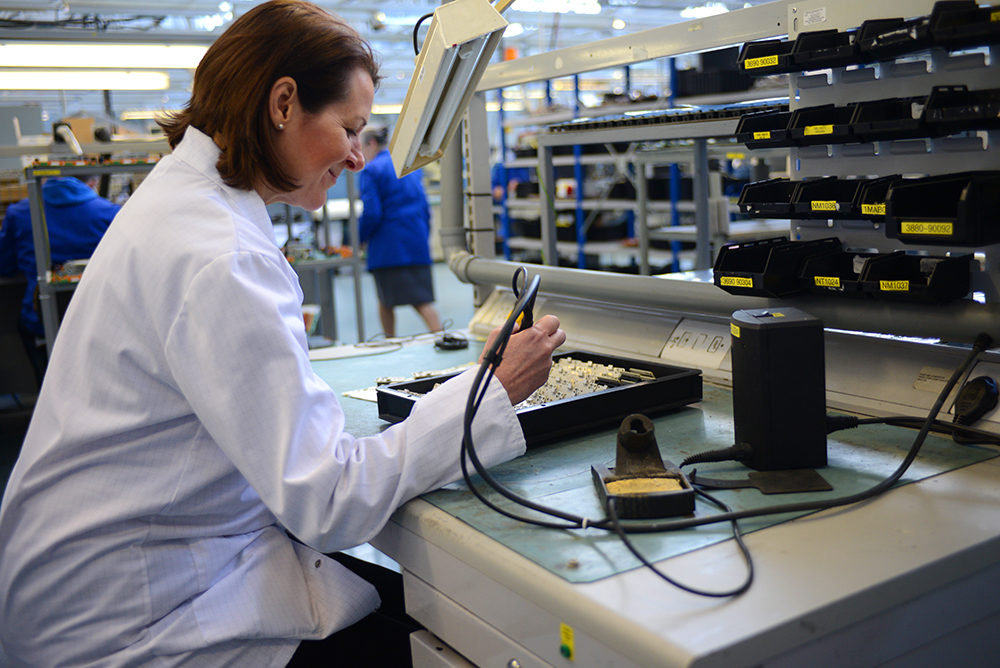 While the details of manufacturing See.Sense lights are top secret, in a broad sense it involves making circuitboards and shells for those circuitboards. 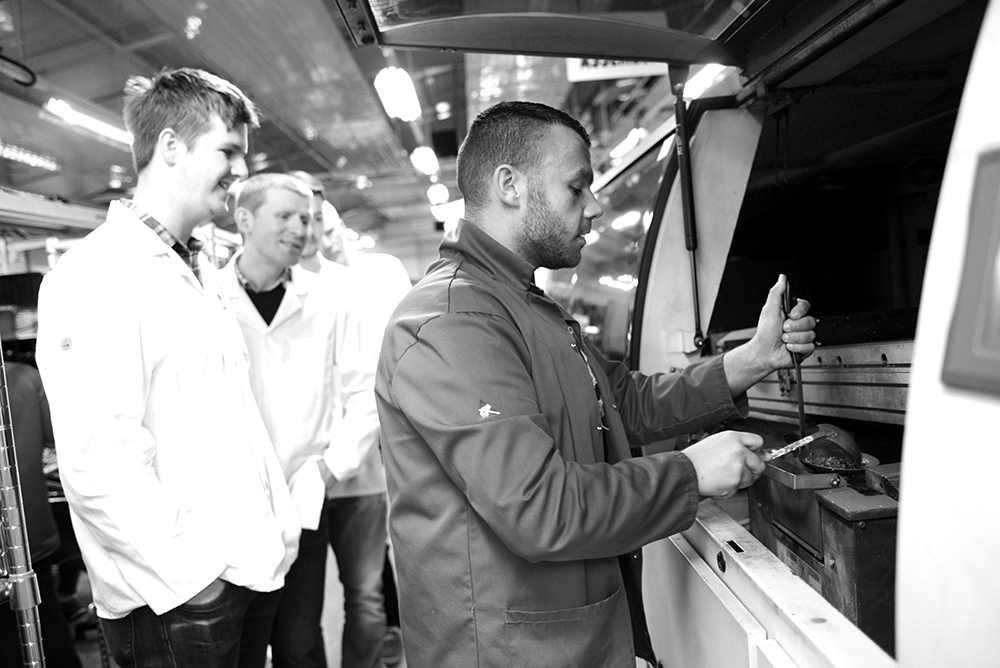 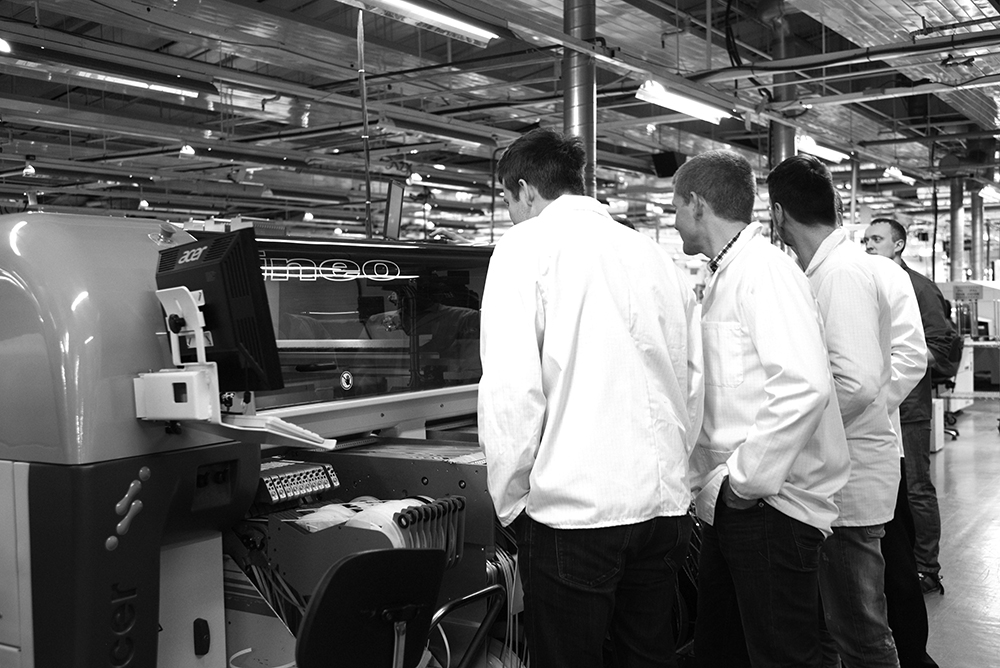 This is done via a multi-step machine process. 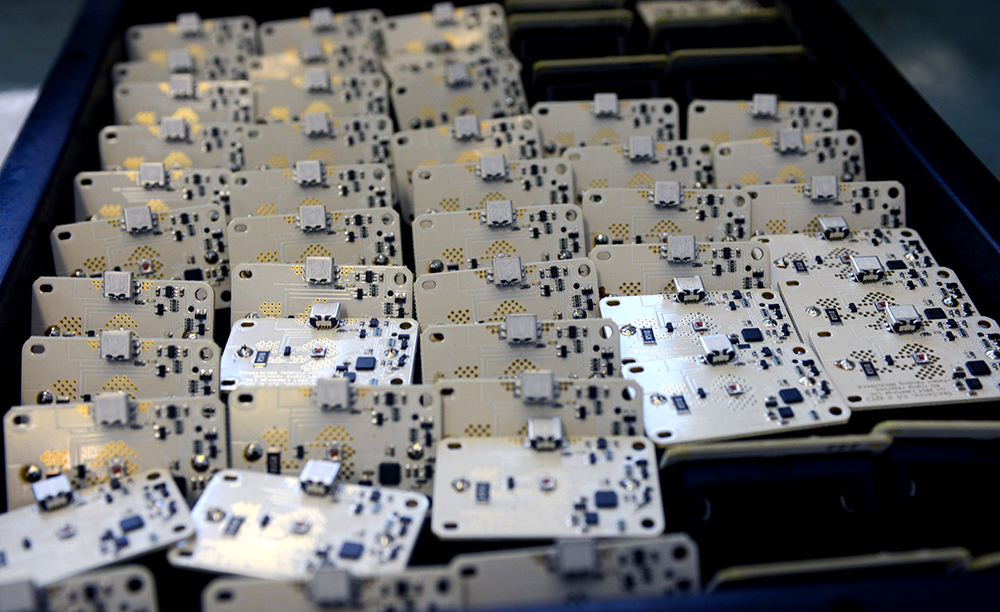 At the end of which the boards are cut into light-sized segments. 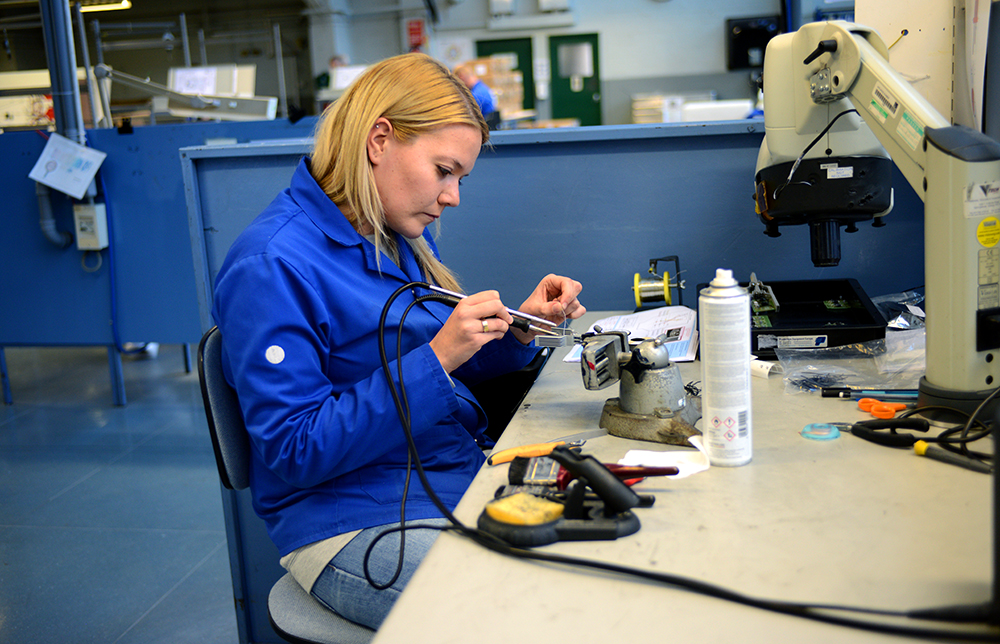 At this stage, finishing touches are done by hand. 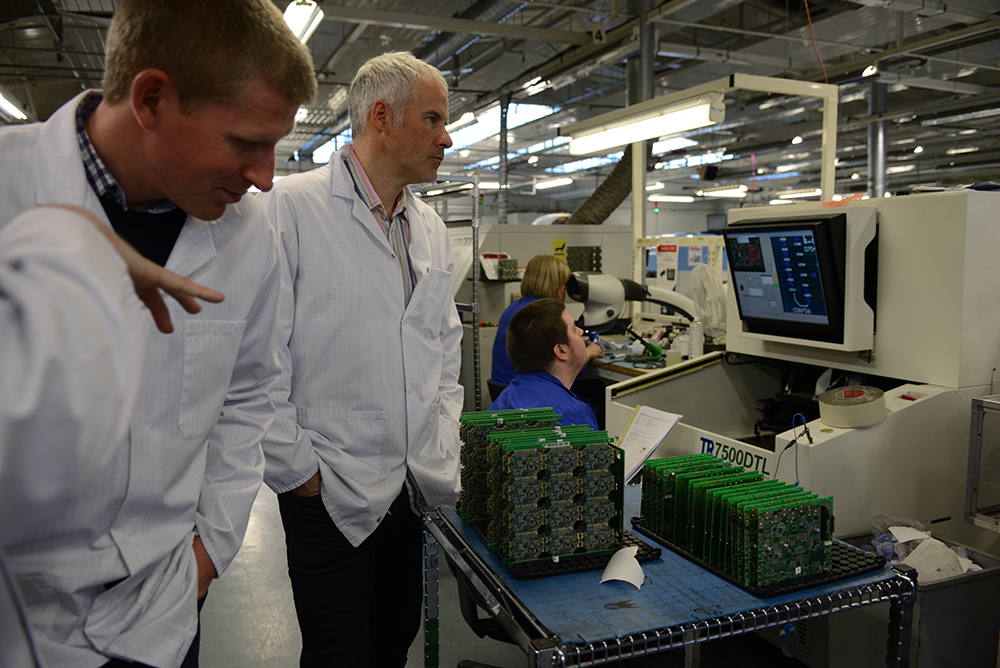 Which is followed by several testing and quality control phases. 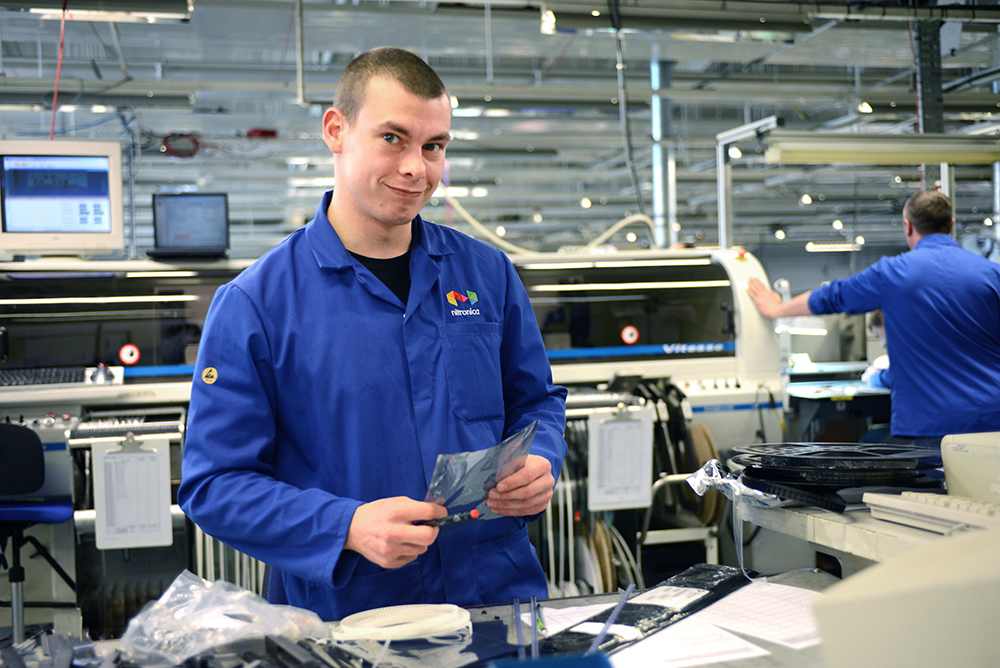 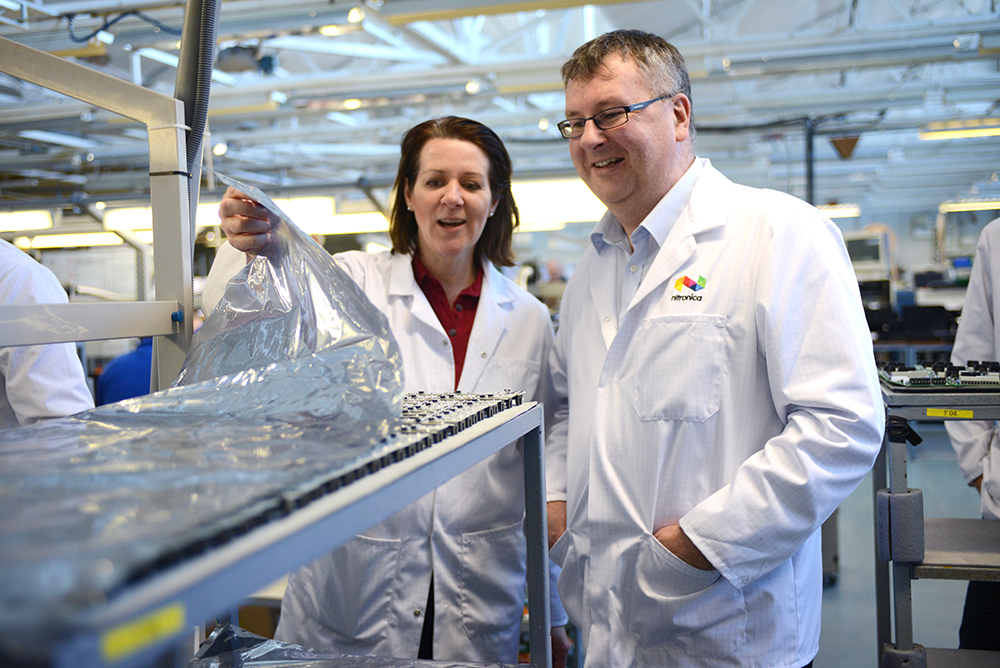 Finally, the innards are prepared to be assembled into lights. 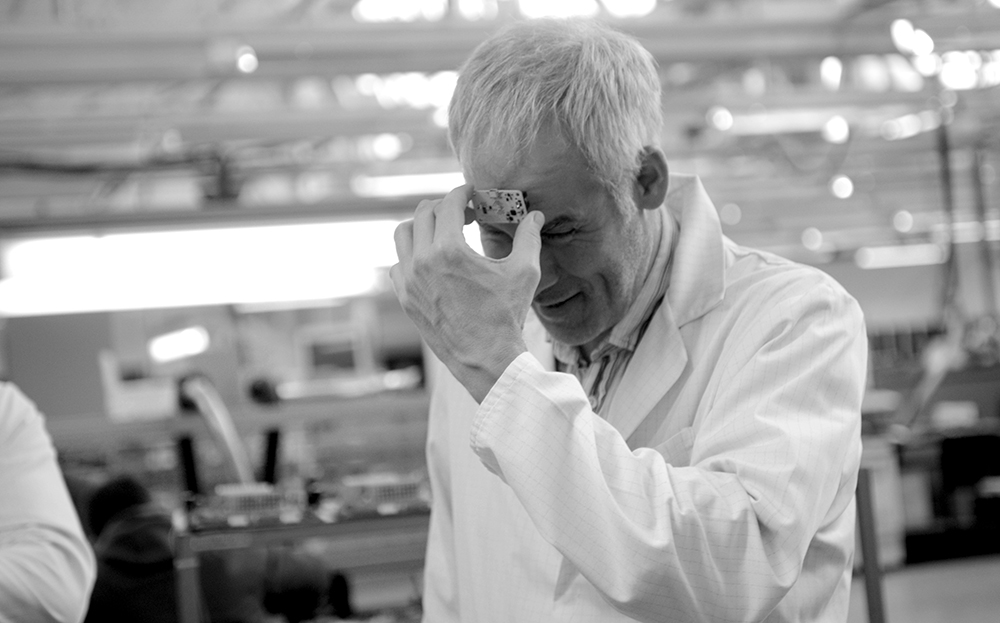 (As our delegation has determined, the lights do not work without the crucial assembly phase.) 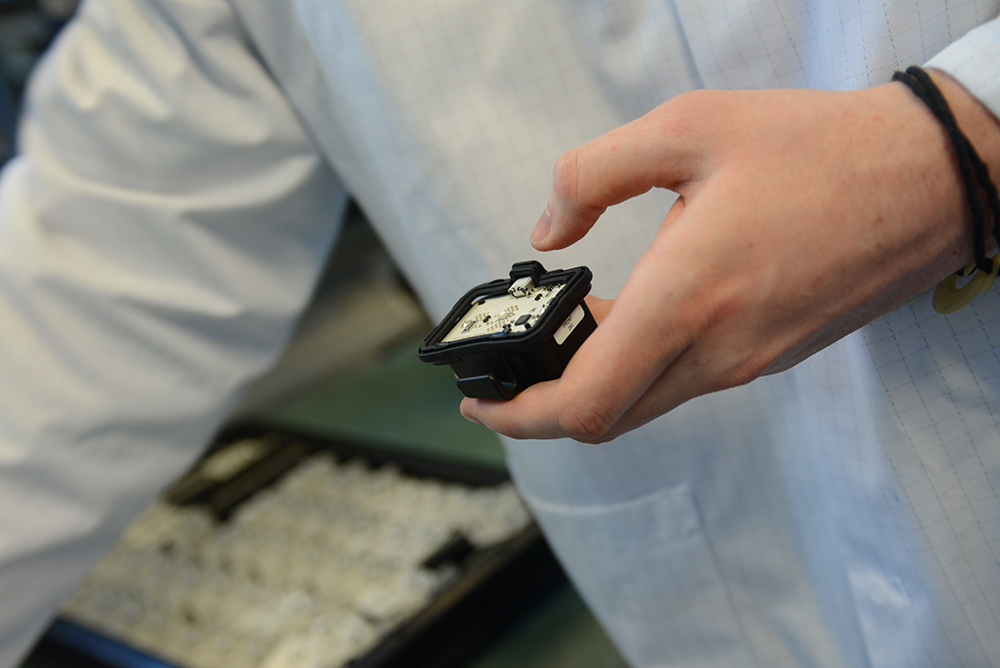 Not to worry though, as assembly takes place in the factory also - albeit a lot quicker when we are not there to pester the employees. 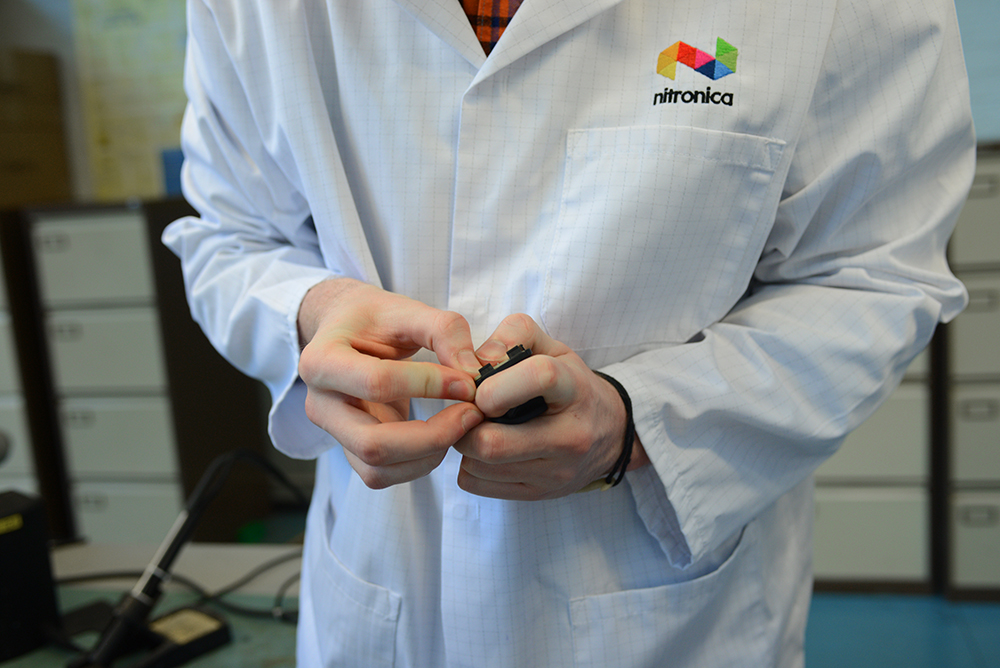 As interesting as it was to visit the NItronica factory and see how See.Sense lights are made, what I found more interesting still was the company's response to my question of why they chose to manufacture locally. 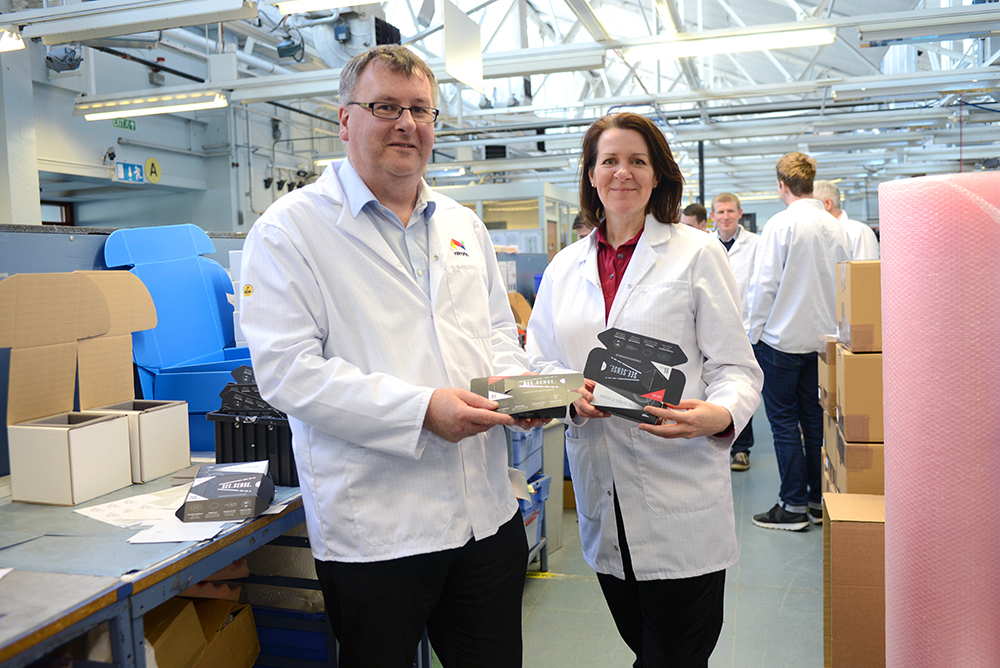 To my surprise, the answer to this question was that it made the most sense financially. When the founders of See.Sense were first looking at where to have their product made, they did research and compared the available options. Having discovered there was a factory capable of making their product in their own backyard that was willing to do small batch production while also being capable of going large-scale, they compared prices, did a cost/benefit analysis, and determined that going local simply made more sense in their case. NItronica's cost was reasonable. Their reputation was excellent. And, just as importantly, the factory's proximity would facilitate communications, eliminate travel expenses, reduce manufacturing time, allow for greater involvement in and control over the manufacturing process, and offer greater flexibility.

As all this was being laid out for me, it made perfect sense. It was, however, quite a change from the more typical story I am accustomed to hearing- that of how much more difficult and expensive it is to manufacture locally than to outsource. 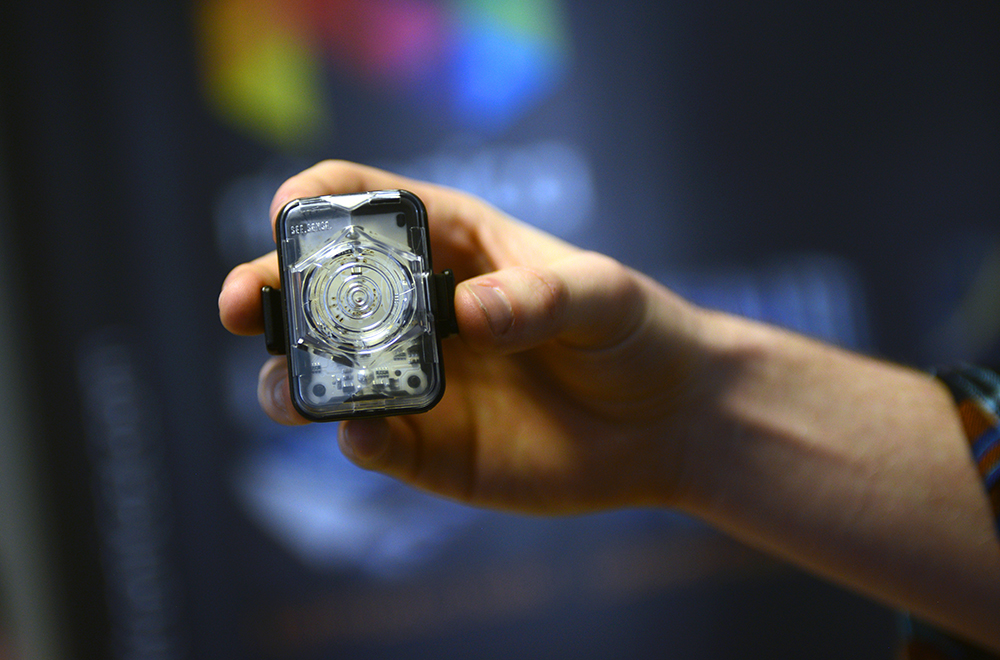 And indeed, for many companies it is more difficult and more expensive to manufacture locally - sometimes so much so that going that route is financially impossible; by no means is my intent to invalidate this claim. But what I mean to say is, "locally made" does not automatically mean mission impossible. And a business isn't always forced to chose between wishing to make a reasonable profit and opting for local production. It all depends on the industry, on the location, on the specific logistics involved in manufacturing a particular product, and on many other individual factors. 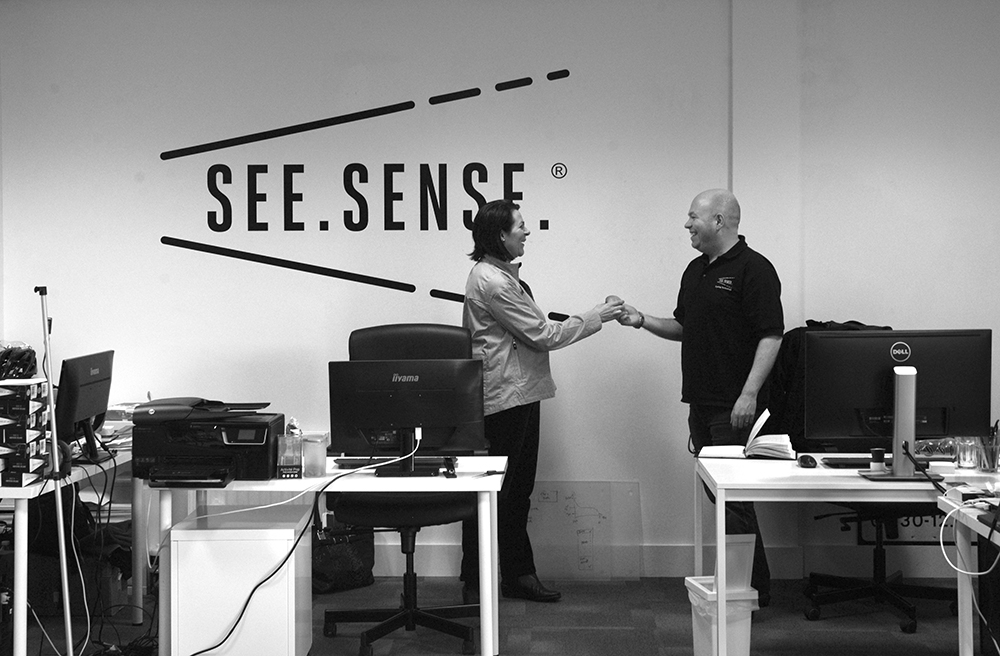 Talking to See.Sense and NItronica about their practices has offered me a new perspective on local manufacture, which I hope you too might have found interesting. And while I will be returning my sample lights soon, I will continue to follow See.Sense with interest. Aside from being a downright adorable couple, Irene and Philip are doing cool, innovative things and are a pleasure to talk to about cycling, technology, and pretty much anything else. I look forward to seeing what else they come up with in future, and I thank them for taking the time to speak to me about their products and show me their manufacturing process. A thank you also to NItronica for the informative tour.