Better Looking At It Than From It 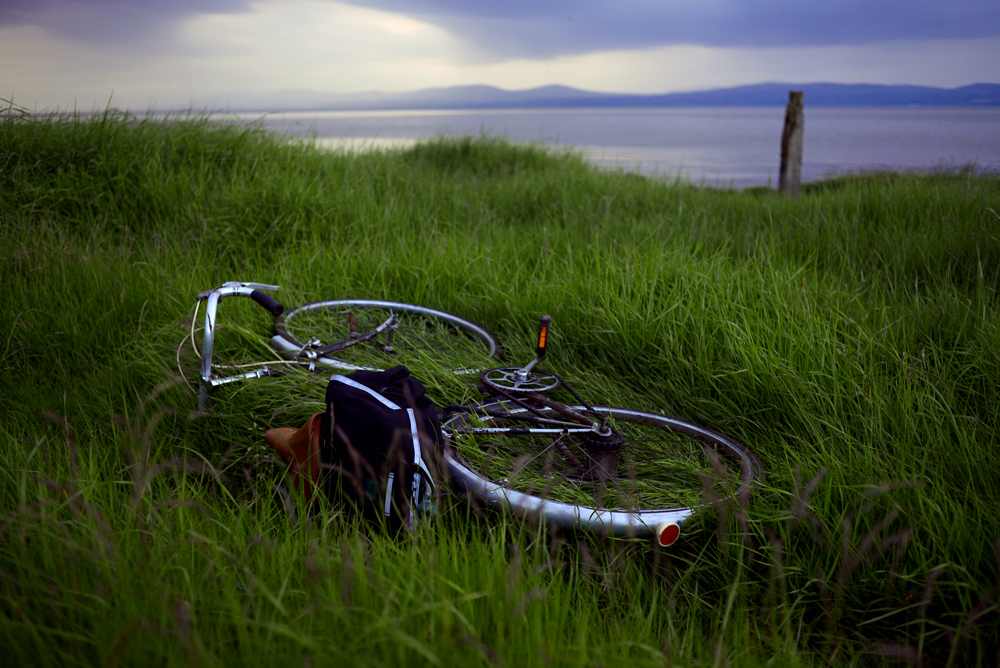 Since my first visit to the Roe Valley in County Derry, I have been in love with its unique, beautiful view across the Lough Foyle - a saltwater inlet that separates this northwestern corner of Northern Ireland from the Inishowen Peninsula of the Republic's County Donegal. This view consists of a vast expanse of water, separated from an even vaster expanse of sky only by a thin strip of land - or, more accurately, by a strip of mountains. Their peaks irregularly shaped but similar in height, the mountains frame the water's edge like a string of freshwater pearls laid out on a piece of velvet for inspection.

On clear days, and particularly toward sunset, the mountains emit a multi-hued brilliance that makes the scene look more like an idealised illustration of what such a view could look like than any real place that might possibly exist. On hazy days, the mountains are rendered flat and lilac by the sea mist, losing their detail and turning into abstractions of themselves - at times resembling a paper cutout collage, at times a road sign communicating, with deliberate bluntness, the idea of "mountains on horizon."

This iconic scene is visible from nearly every point in the Roe Valley, if facing northwest. With only minor variations, it is the view I see when cycling along the main coastal road and along the myriad of tiny mountain backroads. It is the view from the local airfield and from all the farms along the banks of the Foyle. It is a view that I can glimpse at this very moment from the window of the back room which I have just finished turning into an office.

It amazed me at first that in this rambling seaside farmhouse where I stay, with rooms sprouting from rooms, only one tiny back bedroom faces the water - and even there the Foyle is half-obscured by trees and barns. But I understand it now: the farmers' eyes and psyches must have needed a rest from that ever-present lilac string of mountains slicing through water and sky.

It may be a while still before my own eyes require a rest from the glorious Foyle view. But one thing has changed since I first began admiring it: Nowadays, when I look at that distant strip of land, I no longer fantasise about cycling over its undulating ridges. Because I know that what I am seeing does not actually exist, as such.

My big childish disappointment upon visiting Inishowen for the first time had been learning that the "string of mountains" glimpsed from across the water is actually an illusion. Oh there are mountains there all right. But they are scattered all over the peninsula, rather than being aligned in a distinct, linear formation as the view from this side suggests. It is the vantage point from the Roe Valley that flattens them and strings them out, creating a mirage of a cohesive and picturesque mountain range.

Cycling along the main coastal road in Inishowen, the view across the water in the Roe Valley direction is less extraordinary than the other way around. The asymmetrical Binevenagh Mountain sits awkwardly, refusing to harmonise with the Sperrins mountain range behind it and distracting the eye. The scene lacks the rhythm and the symmetry of the Inishowen view, as well as - due to the direction of the light - its magical colouring. In contrast to the Roe Valley, the main stretch of the Foyleside road in Inishowen is quite busy with cars and dense with tourist establishments. Funny enough, nothing about cycling there hints at how magical, wild, and remote it looks from the Northern Ireland side.

Thinking of this as I saw those lilac hills again while cornering around a bend, I remembered an episode from childhood. It was shortly after my family moved to the US. We lived in New York City at first, then moved a couple of states north to a small New England town. While my parents looked for a house to buy, they rented a cramped in-law type of apartment, in the attic of what must have been the ugliest, shabbiest house on a street otherwise filled with impeccably maintained historical homes. This apartment had a balcony and I spent most of my time there sketching. I had just turned 11 and was entering my Architectural phase, so what I sketched was mostly other houses. I grew particularly enamoured of the house directly across the street - a neo-gothic concoction with gables jutting out in every direction, an overabundance of decorative latticework, and a tower suggestive of a lighthouse. Sketching this magnificent structure, I initially wished that my family lived in that pretty house instead of where we did. As I sketched, I enjoyed imagining that my bedroom was up in the lighthouse tower. But then one day I let that train of thought continue: Say we lived in that house instead of this one, and I had my own bedroom in that cute lighthouse tower, and there I was, at the window, sketching... It was then it occurred to me, that my view from the tower window would be of the nothing other than the ugly house I was living in right now. Suddenly, I felt quite happy where I was, having experienced the epiphany that a view of a thing could in some ways be more enjoyable than the thing itself.

The Roe Valley is far from an ugly house with a pretty view. The landscape here is in of itself gorgeous; the roads are quiet and serene. Cycling through the damp, steep, narrow, herb-scented mossiness that is its back roads, I have never been happier on a bicycle. That the view across the water suggests a landscape even dreamier elsewhere is but a trick of the eye. Because when it comes to mountain views and sea views and views of every other variety, that is exactly what they are - views, meant to be glimpsed from a distance. And ideally on two wheels.
Labels: hills Ireland roadcycling stories