Bicycle Fit, Comfort, and the Ever-Changing You 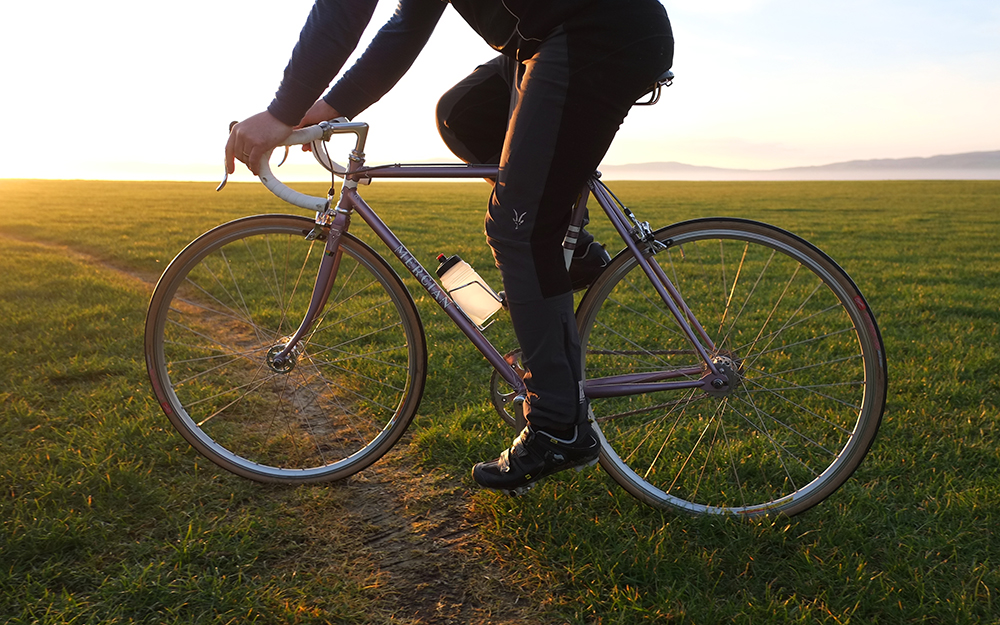 A friend had recently returned to roadcycling after an absence of several years. He bought a very nice secondhand bicycle, which was professionally set up for him by a bike shop. The bike seemed to fit him well and felt comfortable during an initial 10 mile spin down the road. Shortly thereafter I joined him on a 30 mile ride. Everything was grand at first. Then, around the half-way point, my friend began to experience discomfort. It started with soreness in the saddle. Then back pain. Then tingling and pain in the hands. As we continued to cycle, his discomfort grew from mild to unbearable, forcing us eventually to take a shortcut and shave some miles off the route originally planned. In the end my friend was crestfallen: The bicycle that at first felt so good had turned into a torture device. He started theorising about the fit issues that could be causing his pains. Should he alter his saddle's setback? handlebar height? stem length?

But, having watched him pedal beside me, my intuition told me there was nothing actually wrong with the way his bicycle fit him. His back was at an angle that "looked right." He wasn't shifting about restlessly, as if uncomfortable with his saddle's position or his handlebar reach. Neither was he hunching his shoulders or extending his arms rigidly. Furthermore, my friend is a fit man with good muscle tone. My suspicion was, his position was fine - he just needed a bit more time in the saddle.

So, when he asked my opinion, I said "Look. I am no expert in bike fit. But you may want to give it another couple of rides, increasing your distance more gradually - then see if you're still getting these pains."

Somewhat to my surprise, he listened to me. Then two weeks later we set off on the same 30 mile route we'd previously attempted. His bike - to which he hadn't done a thing since the last time - felt great throughout the ride. No sore behind, no back pain, no tingling hands this time.

Naturally, I was delighted for him - as well as relieved I'd judged the situation correctly! After all, ignoring discomfort and pain that arise from genuine fit issues can not only discourage a person from cycling, it can lead to damage and injury. The question is, how do we know when the discomfort is worth "riding out," and when it requires making adjustments to bike fit? Of all the questions pertaining to fit and comfort, this is one I seldom see addressed. We talk all to easily of making changes to the bike. But what about the ever-changing rider? It is only logical that changes in our bike-specific as well as general fitness will effect how comfortable we are in the saddle.

In myself I have observed this process in action both in the short term and in the long term. Every spring, when I go out on my first "proper" long hilly ride, I will experience a variety of annoying discomforts. Almost certainly my butt will feel sore if I increase my distance too quickly. Over hilly terrain, sometimes my back will start to hurt if I attempt to push the pace up inclines. And toward the end of the ride, indeed my hands might tingle or feel numb. This does not mean that my bicycle suddenly doesn't fit me as well as it used to. It just means my body has grown unaccustomed to long distance and/or intense cycling. Invariably, after the 2nd or 3rd long ride these early-season discomforts disappear, and my roadbike, once again, feels like a seamless extension of my body.

As I continue cycling year after year, I notice more sustained changes as well. As I've grown stronger, hills no longer hurt my legs in the way they once did and I can push a higher gear. A persistent ache in my lower back that I'd suffered for years on long inclines finally disappeared entirely as I developed greater core strength (see this earlier post on "climbing muscles"). Thanks to an increase in upper body strength and flexibility, I hardly ever feel pressure on my hands anymore, and can spend more time in the drop position than I used to. Even my sense of balance has improved as a result of all these changes. To be sure, my own changing body has been just as influential in my level of comfort on the bike as any tweaks I've made to the bike itself.

So, how do such changes come about? For the most part through cycling, cycling, and more cycling - in particular, the sort of intense, effortful cycling that pushes the boundaries of our current abilities and comfort zones. The changes can also be hastened, or supplemented, through other physical activities that promote overall fitness and muscle tone - whether it's running, scrambling up and down mountains, or (gulp) weight lifting.

Don't get me wrong, dear reader, I'm not suggesting that cyclists "ought to" do any these things in order to feel comfortable on the bike. I only started doing some of them myself this past year because I genuinely enjoy them. All the same, it is worth pointing out that building up our own strength is an approach to on-the-bike comfort that is no less valid than tinkering with a bicycle's fit.

Getting back to the question of knowing when discomfort can be overcome by our own acclimatisation, and when it necessitates making changes to the bike: Obviously there is a lot to be said for individual differences here. To a large extent it is really a matter of knowing thyself - being aware of what your body is telling you, recognising your patterns from one year to the next. And while some types of pain disappear with increased fitness, others (some of the more obvious I can think of being knee pain and genital numbness) are more obvious indicators of bad positioning and should not be ignored. When in doubt, seek professional advice from a bicycle shop or fitter you trust. Your mileage, like your on-the-bike comfort, may vary.
Labels: bike fit comfort mercian pain roadcycling