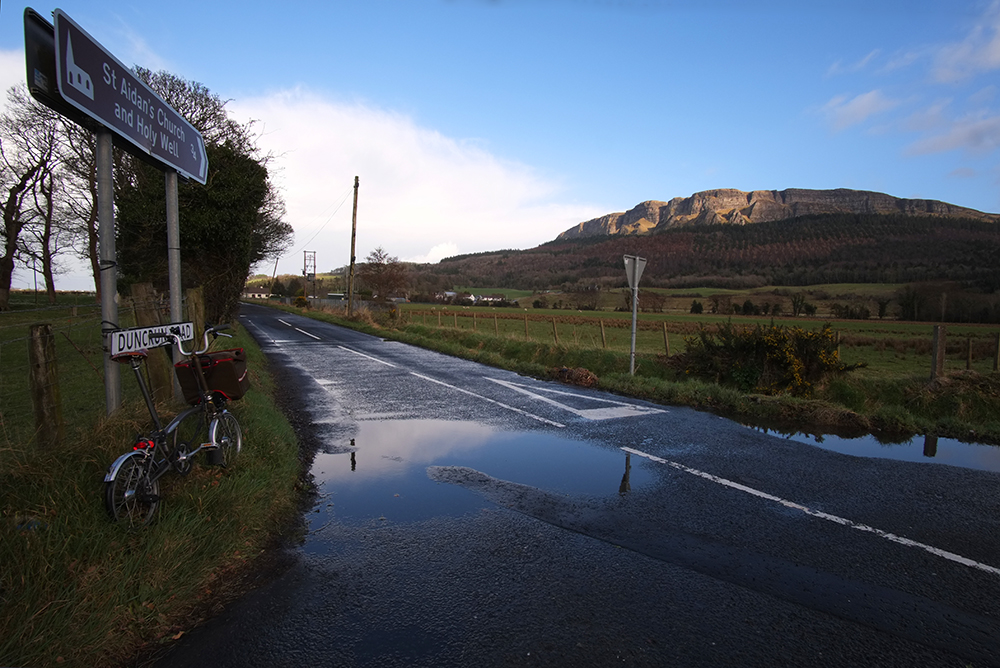 We live in an era when shops throughout much of the world are standardised to such an extent, and exported goods so easily available, that being asked to procure something "local and unusual" from one's neck of the woods for curious friends can present a daunting challenge. Luckily, in this remote corner of Northern Ireland I have a few tricks up my sleeve for such purposes. Pulling one of them out this windy morning, I set off to visit St. Aidan's Well.

Two miles down the main road from my house, a modest sign points to this local landmark. The back road it invites you to take then winds its way up the looming Binevenagh mountain. From this vantage point, the mountain has a stacked, tiered appearance - resembling a misshapen cake. First come the grassy tiers, then the forested ones, finally giving way to the flat-top cliffs. The well is located along one of the forested tiers. 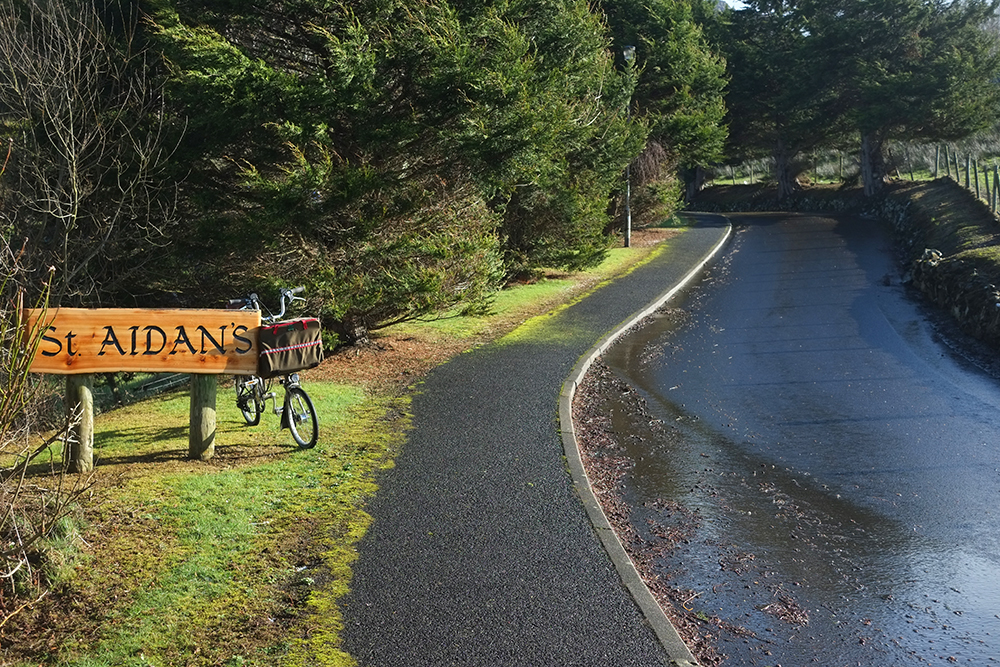 The 1 mile climb to this spot is manageable on my low-geared transport bike. I have done it so many times, there is almost a sense of my legs "knowing" it, and anticipating when the changes in elevation will come; it is like a familiar staircase. 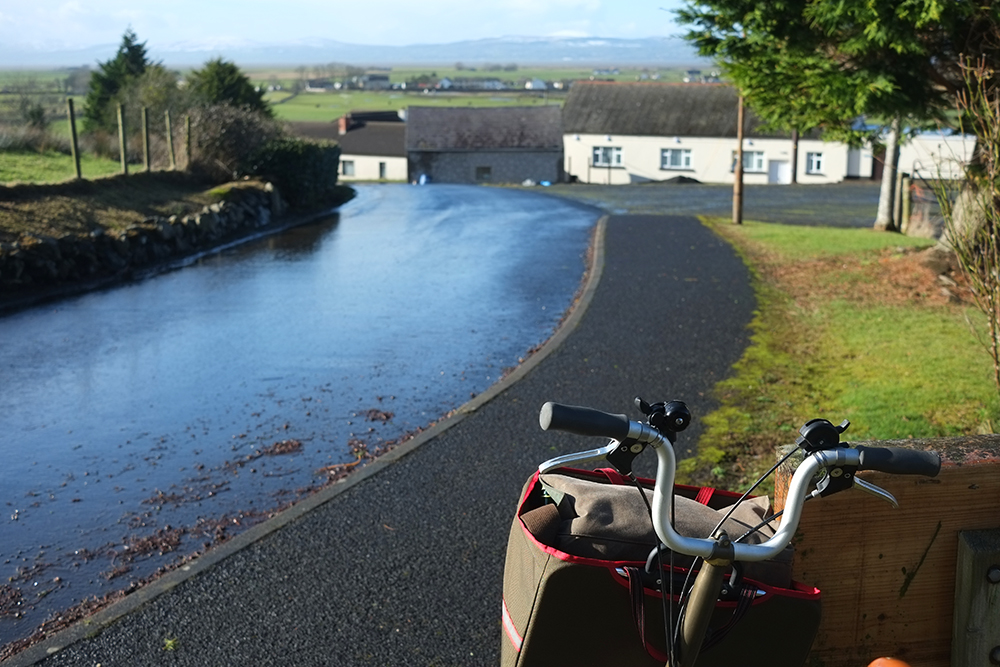 But when I turn around, the view reminds me that the climb is indeed considerable. Those flat green fields in the distance are where I've cycled from. 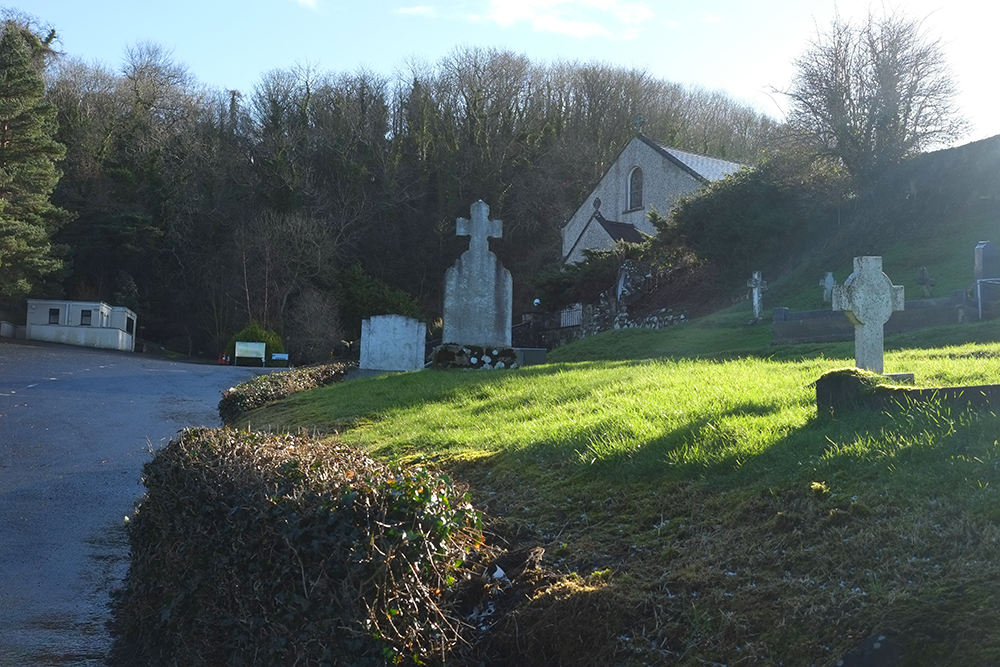 The steep pitch continues as the road proceeds past the carved wooden sign, until at length the stone walls of a graveyard are revealed. Then, a glimpse of a small tidy church.

In Northern Ireland, Catholic churches are referred to as "chapels." While Presbyterian and Church of Ireland churches tend to be situated prominently along main roads, Chapels are more likely to be hidden out of the way. They are also likely to be smaller and more low-key in appearance than the Protestant churches. This goes back to the restrictions placed on Catholicism in Northern Ireland, lasting into the late 19th century. But while remote locations are typical of local Catholic chapels, St. Aidan's situation has greater significance.

Originally, this Foyle-facing side of Binevenagh Mountain was a pre-Christian spiritual site that had developed around two natural springs. Early celtic and pict peoples worshiped here, and the area is said to have been a hub for Druid practices. This went on until St. Patrick happened upon the site, declared it holy, and introduced the locals to Christianity. After his death, a disciple of his, named St. Caidan, established a church beside one of the springs, which in later centuries became known (through a spelling error, hence the omitted “C”) as the Church of St. Aidan.

Today, a crumbled piece of wall is all that remains of of the original Church of St. (C)aidan. The structure that replaced it in the 13th Century is somewhat better preserved, standing in the graveyard next to the modern-day Chapel.

In fact, on the day of my most recent visit it was undergoing maintenance work by the Northern Ireland Environmental Agency - clearing vegetation and making stonework structurally sounder. 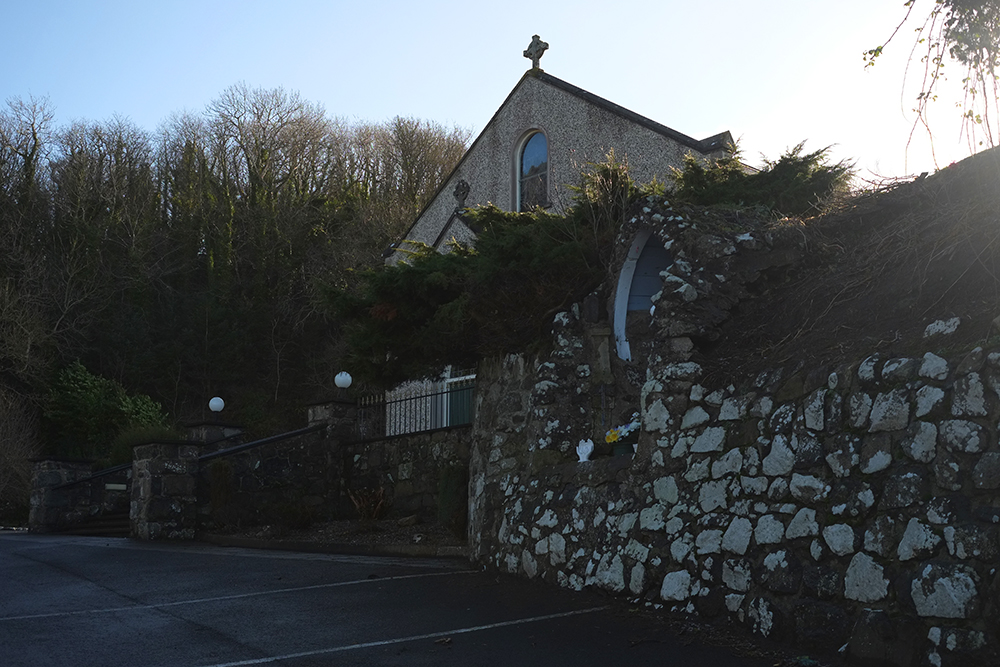 The current St. Aidan's was built in 1823 to replace the medieval structure once it feel into disrepair. It was originally a Protestant Church, as the practice of Catholicism was prohibited entirely under Northern Ireland's Penal Laws at the time. When these laws were relaxed, St. Aidan's was returned to the local Catholic community and has served as a parish chapel ever since.

And what of the pagan sacred spring, which had inspired this sequence of spiritual sites since early times? Under St. Patrick it was refashioned as a Christian holy well. Specifically, it was said to have the power to cure ills and pains, if poured over the affected area. Locals would make weekly pilgrimages to the well to stock up on its medicinal waters. 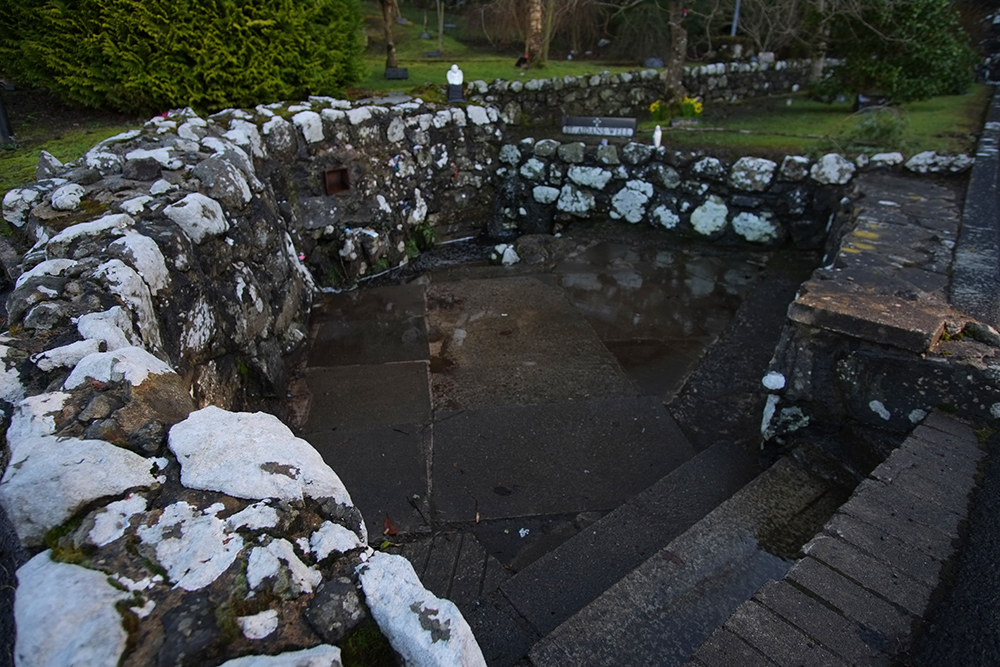 Parishioners still pray here and collect the well's water. Pilgrimages from further afield are probably mostly made by historians these days. 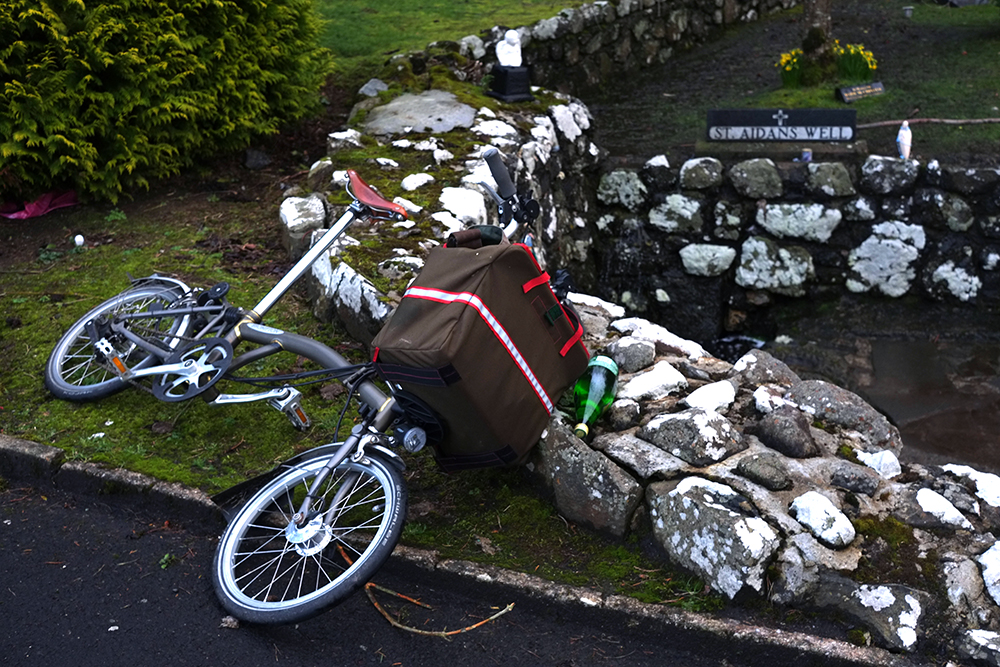 As the weather alternated between sunny and dry to full-on hailstorm mode, and back, I filled an empty glass bottle with water from St. Aidan's well. 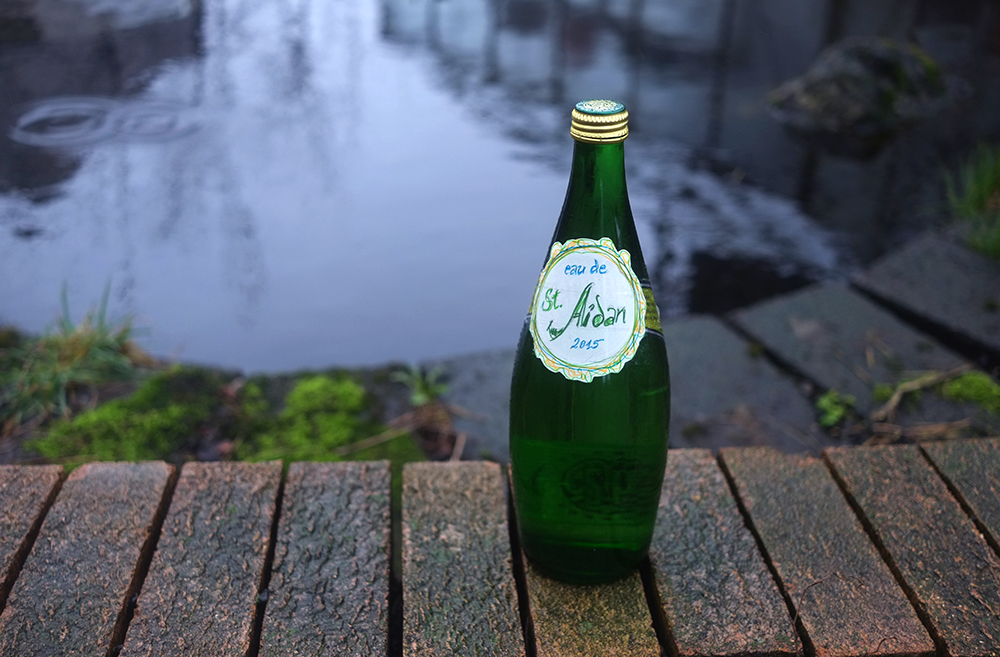 My mission accomplished, I tucked the bottle into a padded bag inside my bicycle's basket before proceeding with the riveting descent toward the main road. While I cannot guarantee the water from St. Aidan's well will heal wounds, something "local and unusual" that you can't buy in a tourist shop it certainly is. 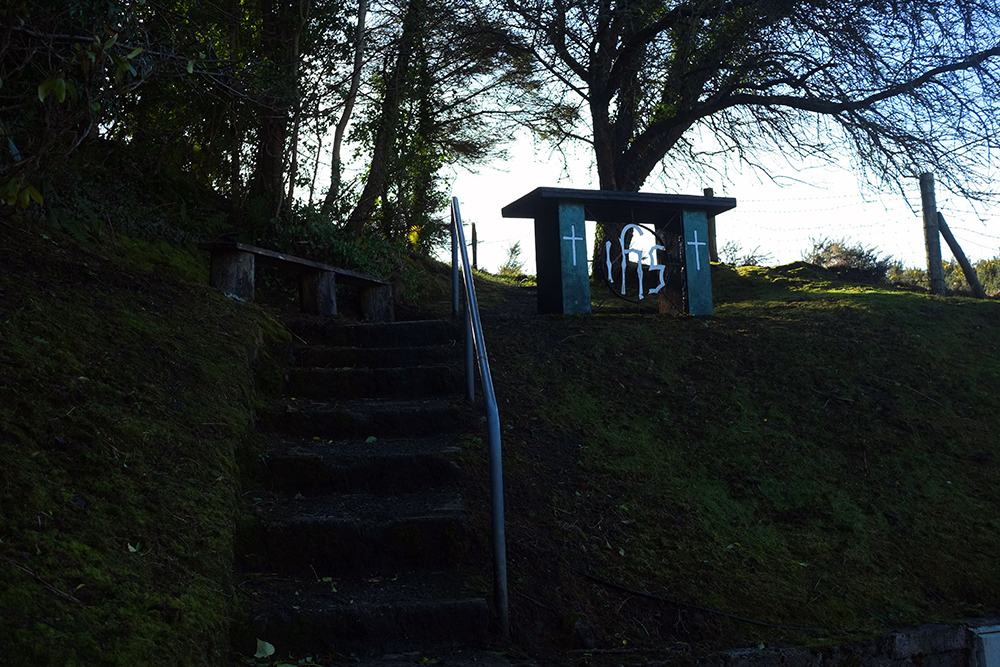 I come to St. Aidan's often. Not because of the well or the church, but because in the wooded lot in the back is the start of a hidden hiking trail up the side of Binevenagh Mountain. The trail is steep and muddy and overgrown with twisted roots; at times I need to use my hands to support myself. Unsurprisingly, not many people come here, except on the driest and sunniest weekends. And perhaps because of this, the trail remains utterly wild, beautiful and serene - one of my favourite local spots. 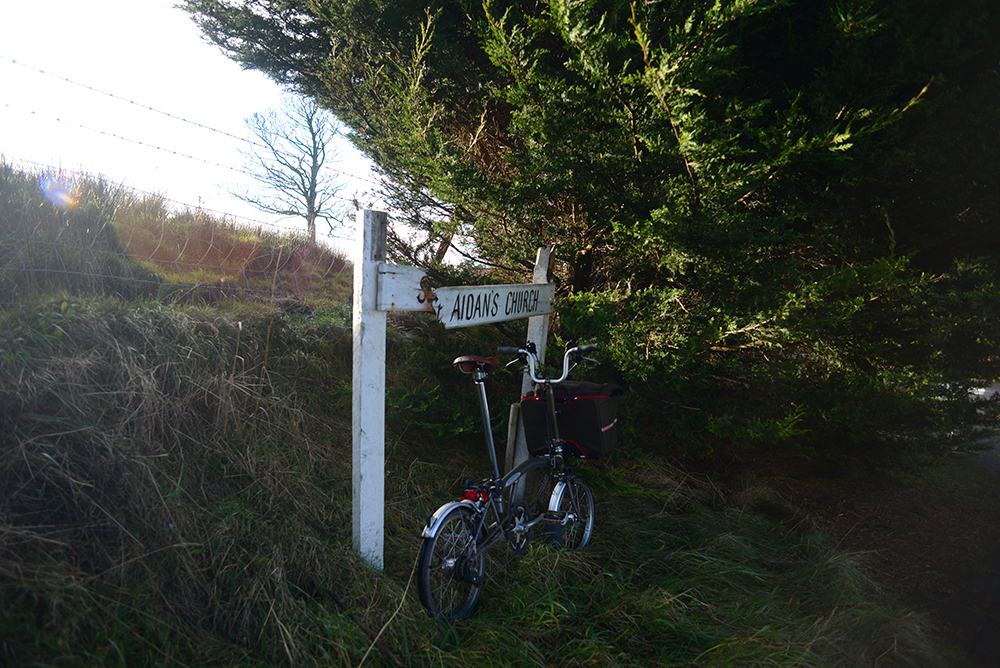 When the mood strikes me, I cycle as far as the churchyard, park my bicycle at the gate, then walk the rest of the way to the top of the mountain. Usually I come to photograph, but sometimes I come for no reason at all. There is something about this part of the mountain that draws me to it. It's a feeling, an energy. And it is utterly compelling. No doubt it is the same energy that made it a place of spiritual interest to the area's earliest inhabitants, inspiring settlements and pilgrimages.
Labels: Brompton Ireland travel