Of Garden Paths and Urban Routes 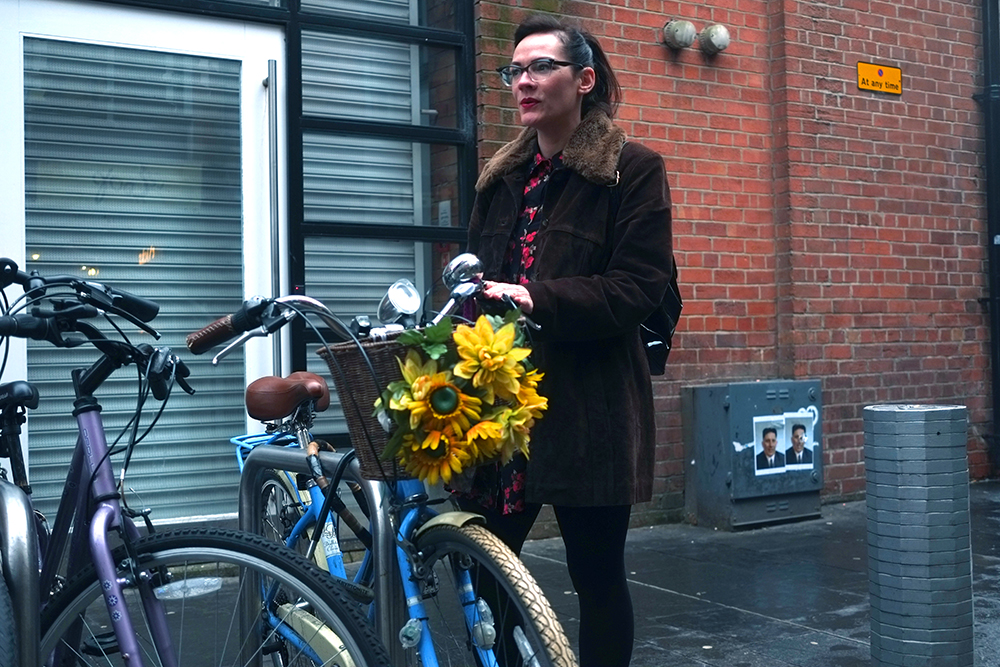 As I sit and work beside a window overlooking my garden, I observe a small barn cat crossing the lawn toward a distant cluster of trees. Both this particular cat and a few of the others make this journey several times a day. And the fascinating thing about it is, they don’t hop across the grass. Neither do they slink through the shrubbery. Rather amazingly, they follow the garden path. The dedicated garden path - a gently curving narrow dirt tract - is not the quickest or the most direct route across the lawn. The cats are not required to use it; indeed no one would expect it of them. And yet they insist on walking along the path, in an elegantly unhurried sort of trot - as if drawn to this more civilised method of moving from A to B.

Pondering this, I think back to my first visit to Belfast earlier in the week. A mere 2 hours away by train, Belfast is by no means inaccessible and I had meant to visit it much sooner - only somehow never had cause to. But finally, a cause arose. And on a cold sunny winter morning I emerged from the depths of Great Victoria Station to find myself in an unmistakably urban landscape of tall buildings and wide avenues. 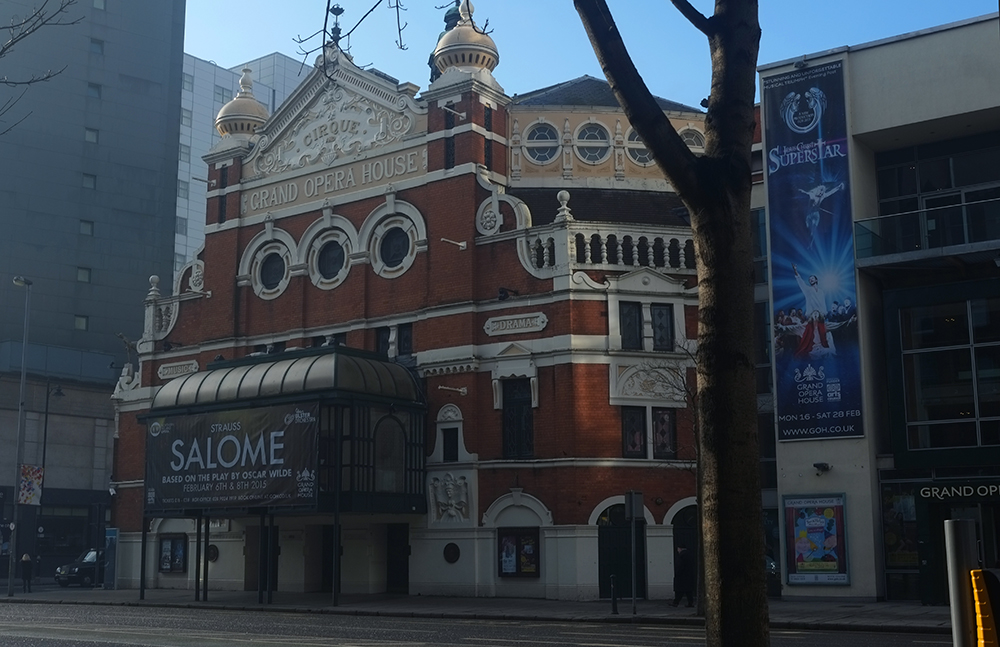 With a couple of hours to kill before my appointment, I set off to wander around on foot. The center of Belfast has a vaguely Bostonian look to it, with red brick and white stone and a certain quaintness to it despite the occasional swathe of post-modern glass reflecting clouds and steeples and our own mortality and attractive shopping centers. 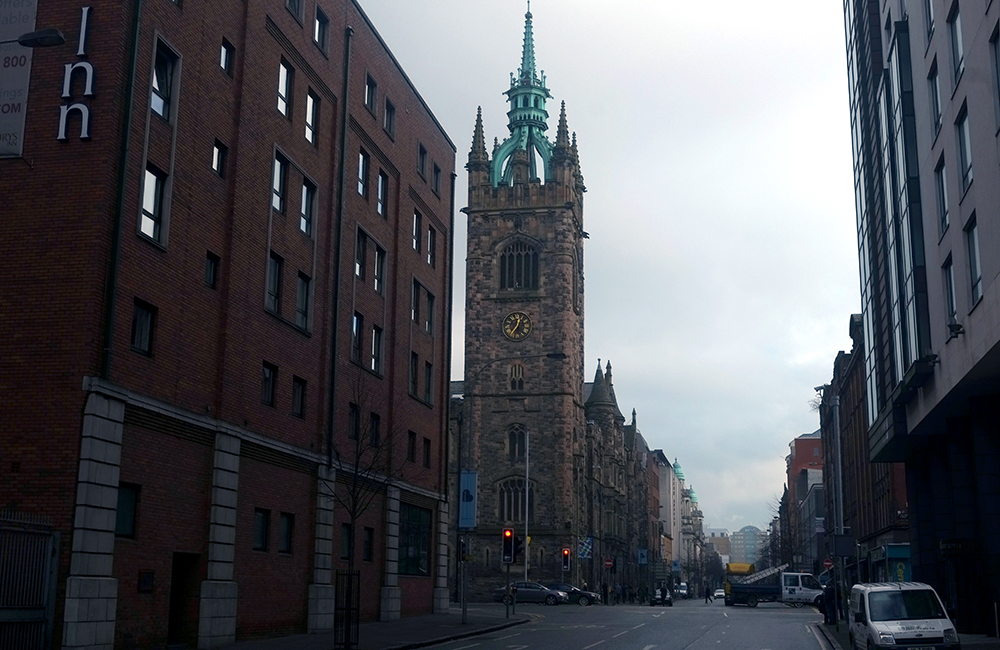 Unlike the center of Boston though, the streets were almost uncannily clean and quiet, and relatively light in both motorised and pedestrian traffic. 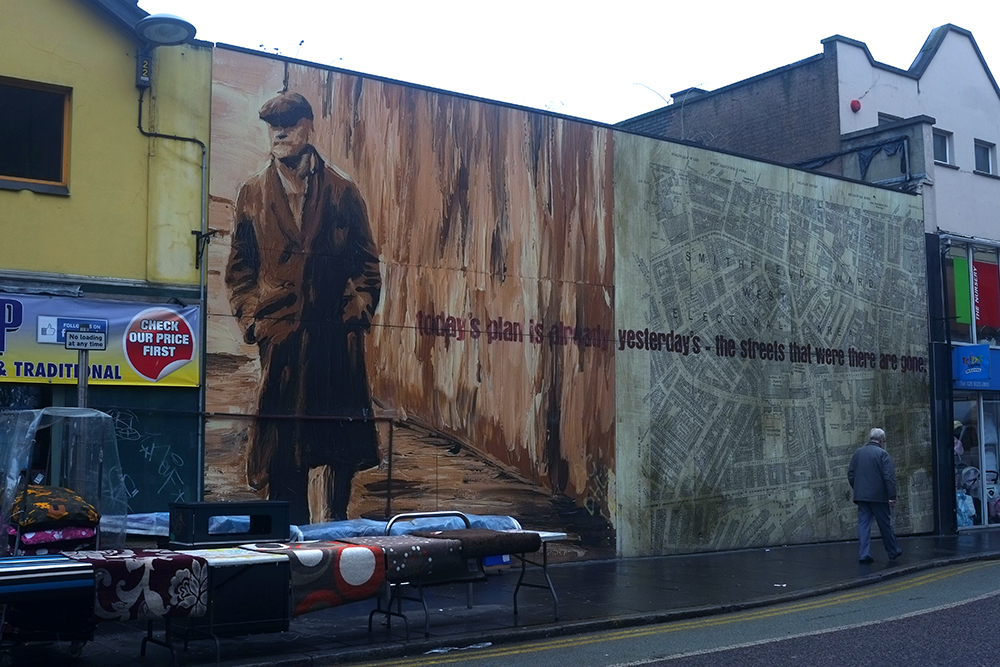 As for bicycles, it was as if some emergency ban had been placed on the city in the course of which all trace of them had been removed. Not only did I see no cyclists as I stood and tried to get my bearings at a central intersection, but I didn't even see any bicycles locked to any racks or railings. Alongside a mural depicting a V.I. Lenin-like fellow and an old city map, inscribed with the ennui-inspiring message "Today's plan is already yesterday's - the streets that were there are gone," I spied what was almost certainly a bike lane. It was as free of cyclists and the main lane beside it was free of cars.

The city center appeared to have a fairly logical layout, and I decided to follow the big main road and see where it would lead. Certainly not to bicycles, it would seem. But perhaps somewhere interesting still. 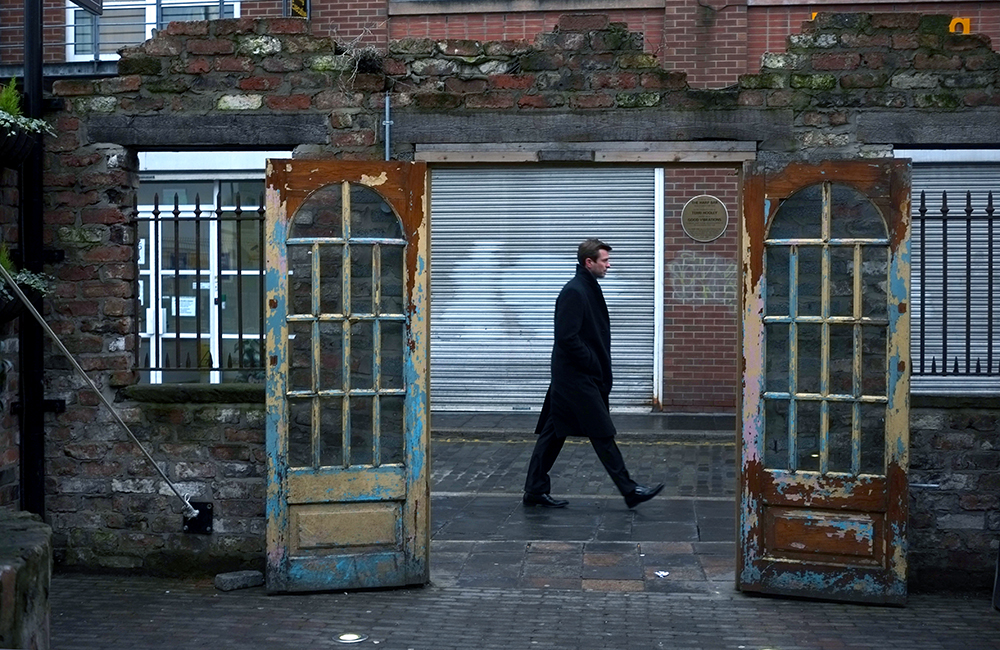 But no sooner had I crossed the main intersection than my plans changed. Having spotted a narrow alley, something compelled me to see where it would lead, instead of continuing along the main road. And that was how I discovered the labyrinthine system of alleyways, pedestrian passages and courtyards hidden within the wide city blocks.

Here, there were cobblestones and benches and walls lined with geranium planters. There were artsy murals. There were pubs and galleries nestled beside half-demolished buildings. There were also quite a few pedestrians. 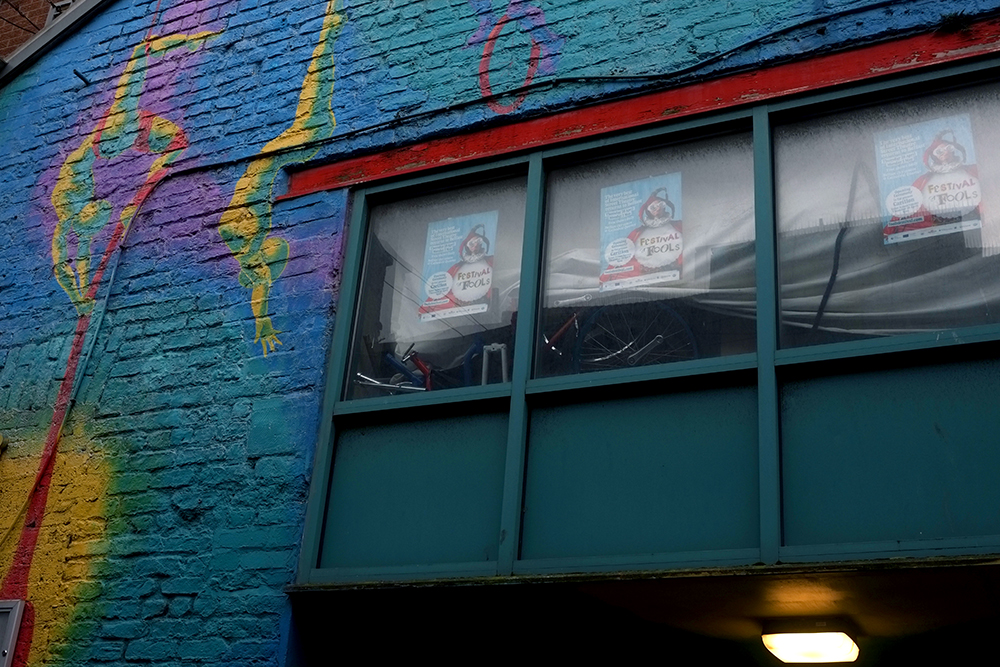 Here also I finally saw the first hint of bicycles. 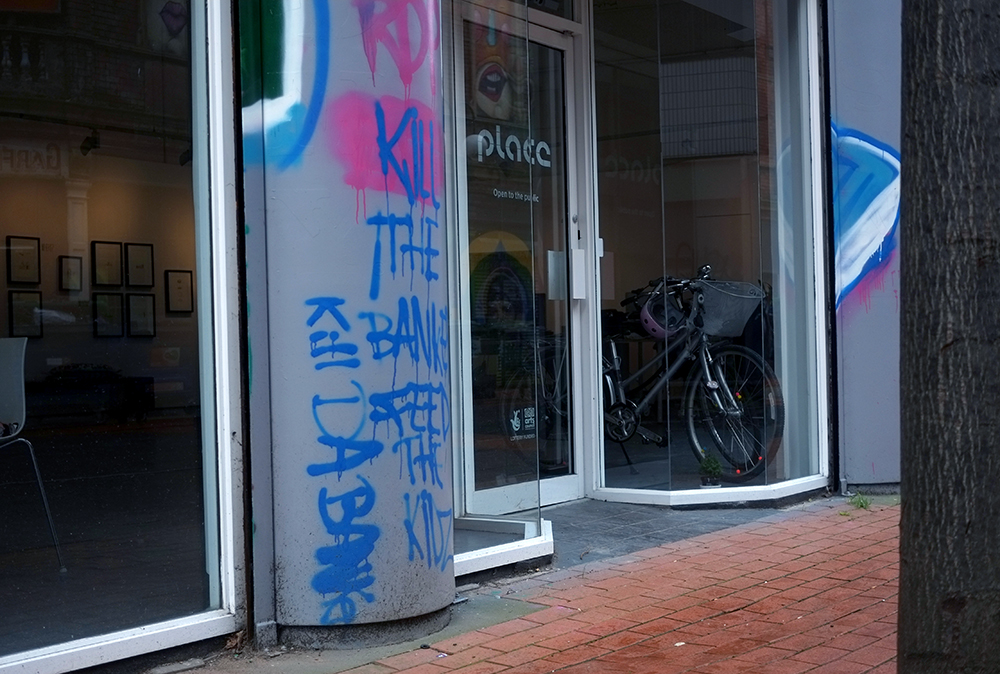 Followed rapidly by another. 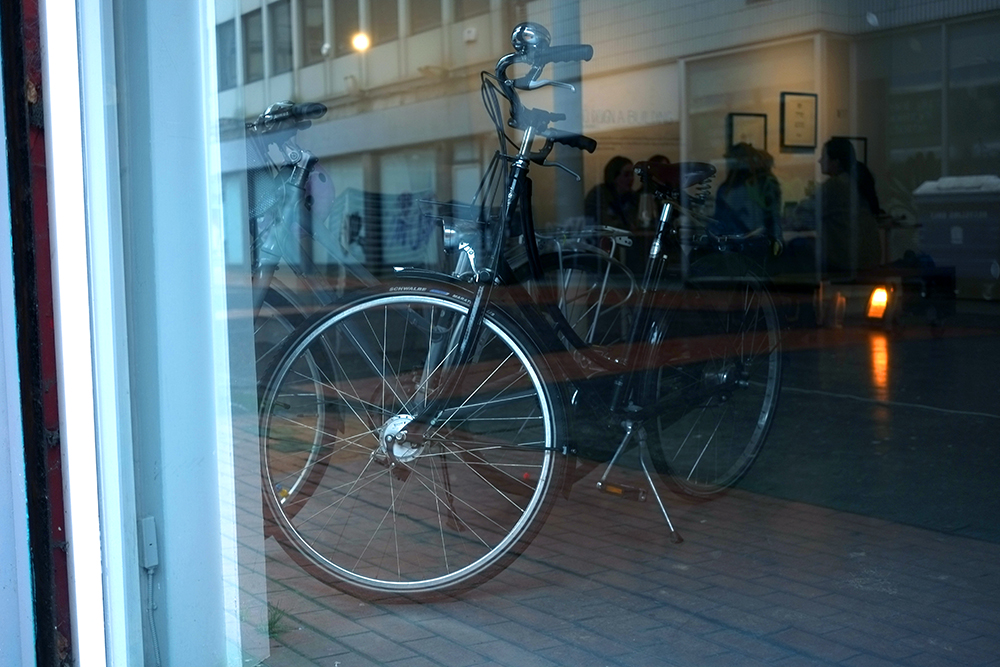 Seeing this Pashley Princess and several other bikes behind glass made me suspect that Belfast was perhaps teeming with bicycles after all - only most of them arrived in the city early and were then quickly whisked inside office buildings. 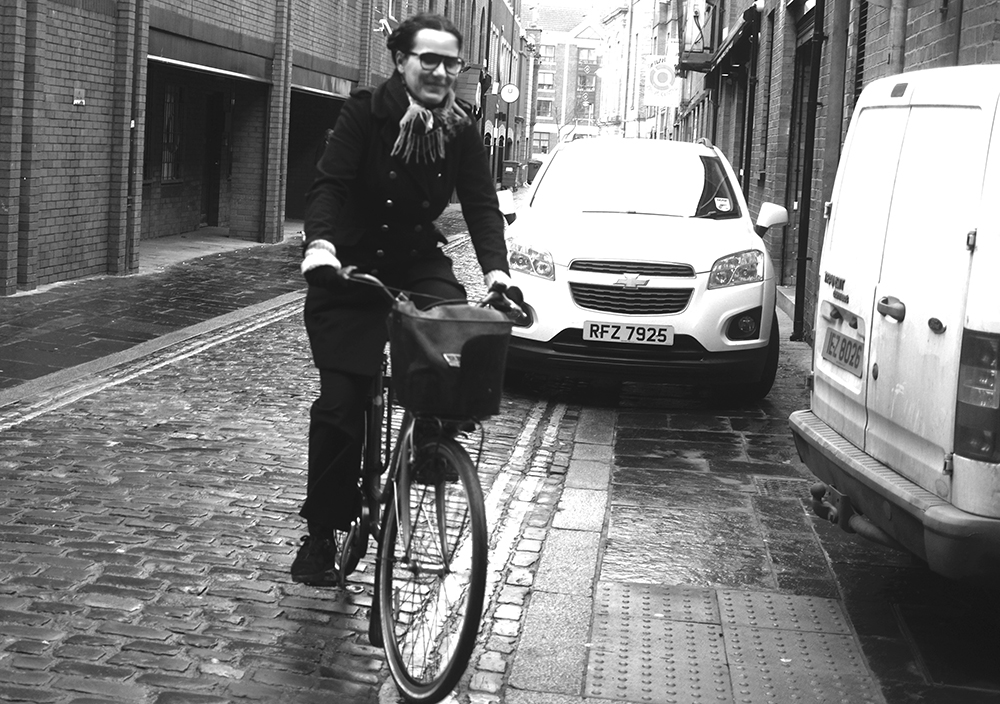 Exploring the maze of courtyards and alleys purely on instinct, I realised at length that the entire city center could be navigated this way quite easily. And, further, that all the "cool" places were apparently located in these hidden nooks and crannies rather than on the main roads. Had I studied a map of the city closely or asked someone local before setting off, I'm sure I would have discovered this fact already and could have planned my route better. But it was precisely the fact that I hadn't done that, yet stumbled upon this way of crossing the city anyway, that I found interesting. Like the barn cats preferring the garden path over the direct open walk across the lawn, I had spotted and chosen the crooked, winding alleyways instead of the normal city streets.

Pausing my walk to buy a coffee, I spotted a poster inside the vintage Citroen - turned vending truck  announcing the imminent arrival of a Belfast bikeshare system. I asked about it, and learned that it was coming in spring. A station is to be installed right beside the truck, in the pedestrian courtyard. There must be cyclists here if they are doing this, I thought. Perhaps today was just a very cold day and not a good example of local cycling culture. 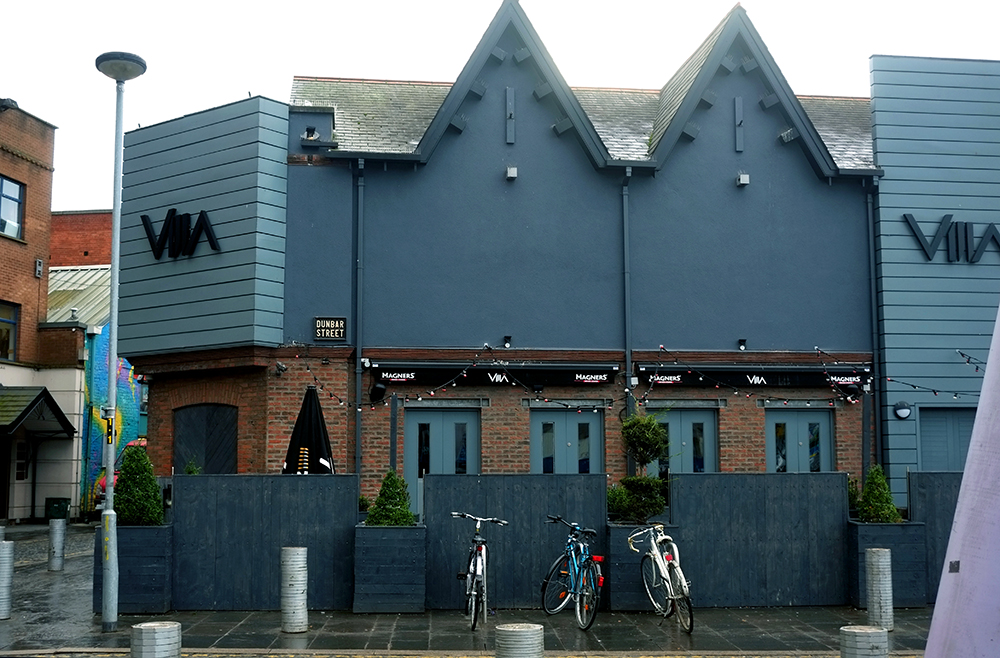 Then again, when the bike share system arrives perhaps it will be like another garden path - offering an alternative, and inexplicably appealing means of travel merely through the power of suggestion.

I will have to visit Belfast again soon and see.
Labels: Belfast transportation options urban cycling