The Demise of the Country Pub, and Other New Year Ruminations 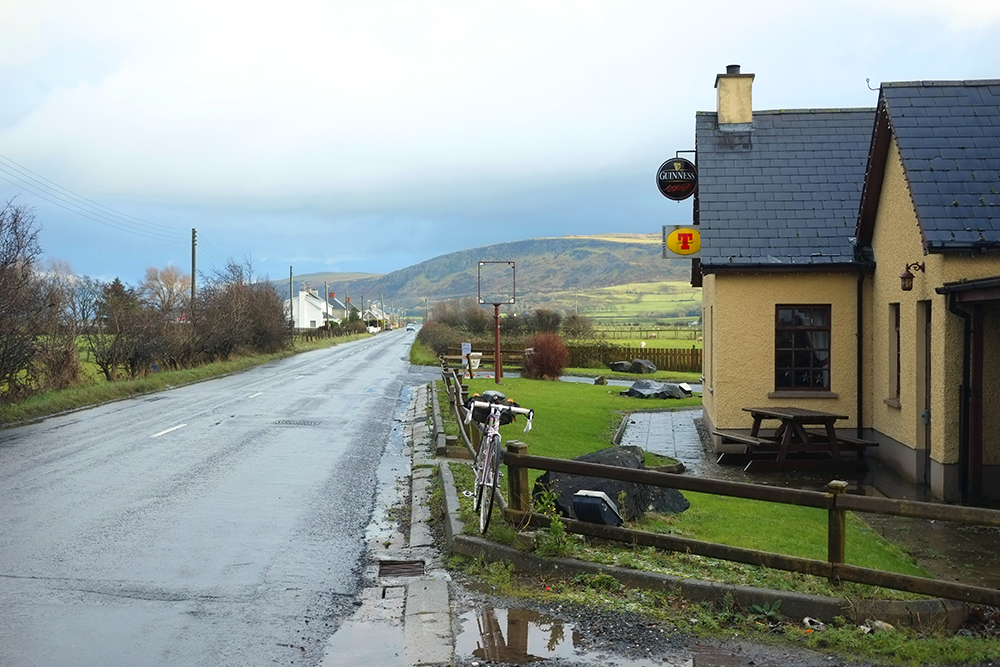 Last week I greeted the New Year in a pub that is walking/cycling distance from my house - a circumstance that is becoming increasingly uncommon around these parts. It used to be that the countryside in Northern Ireland was littered with public houses. Every tiny village and hamlet had at least one. Today, you can still see their remains along country roads - boarded up, or in various states of dilapidation. Others have been torn down, the land beneath them now sprouting housing developments, and only the memories and direction-giving habits of older locals keeping them alive in spirit. "Take a left at the Oasis," one might say, even though no such place has existed for decades.

Those country pubs that do remain in operation are fast becoming an endangered species. Passing them even on Friday and Saturday nights, one cannot help but notice the empty car parks and the lack of patrons inside. Through the brightly lit windows, it is not uncommon to see only one slumped-over silhouette at the bar, or perhaps even none at all. "They'll be shut in less than a year at this rate," a local will say, with a sigh and a shake of their head. And they'll not be far off the mark.

One early cause of the pubs' diminishing numbers, was their tendency to serve as popular targets of sectarian terrorist attacks during the Northern Ireland conflict. In rural areas, pubs that were bombed seem seldom to have been rebuilt - in part for financial reasons, and in part because residents of the small communities tended to become pub-shy after such incidents. But while the Troubles mostly ended by the late 1990s, the country pubs have only continued to vanish at ever increasing rates. What might account for that?

Local friends' thoughts on this are unanimous: Unlike in the good old days, few people today will drive drunk - thanks to a decade-long police crackdown on driving under the influence. And how else would you get home from the pub in a remote area? Sure, you could order a taxi or go out in a group with a designated driver, but that sort of thing is reserved for special nights out - not for the relaxed and habitual practice that going to the local pub is meant to be. Plus, if you're going to go through the hassle of organising a group and a taxi, you might as well head into town - where you can dance, sample sophisticated drinks, and meet new people. And so, on weekends the bars in the towns get all the business and on weekdays folks who drink, drink at home. Meanwhile, the local pubs languish.

When put this way, the demise of the country pub seems like a regrettable, yet understandable - and even necessary - sacrifice for making our roads safe from drunk drivers. If the country pub, nostalgic for it as we may be, has to go, then that is the price we must pay for Being Safe. For our children being safe.

But even as the heads nod with gravitas, there is a sense in these conversations of an undercurrent of absurdity that everyone can sense, in a vague sort of way, but no one can (or will) articulate. Until one day, I, the newcomer that I am, finally tried to:

"So what did they do before cars?"

"How did they get home from the pub before there were cars? I mean, some of these pubs have been around forever, and private car ownership was not widespread here until, what, the 1950s? Maybe later? Not to mention that rural housing estates didn't exist until a couple of decades ago, so homes around these parts were more spread out than they are now. How on earth did rural folks get to the pubs?"

After some thought, answers are brought forth. Horse and cart. Bicycle. Walking. This is promptly followed by...

(An interesting thing to say, considering most of my friends are cyclists.)

Innocently, I ask why not and several answers are offered, with various degrees of conviction. People were hardier back then. Now that there's television, no one can be bothered. And, my favourite: The roads are less safe today.

But the real answer - the one everyone is thinking of - is that it's just not the done thing. It was the done thing back in the day, so that's what everyone did. But today the done thing is to drive everywhere, even if you're visiting your neighbor two doors down. And if you can't drive, you don't go. It would just be too weird.

And so while we might sigh with sadness over the numbered days of the local country pub and talk of wishing it were preventable, we will not go so far as to cycle, or even walk to it along a country road, because it is not culturally acceptable to do so.

Where am I going with all this (other than perhaps to the pub, while it's still standing)? Good question! Sometimes a theme will suggest itself, rather insistently, and then good luck trying to figure out what you're support to do with it... But I've been thinking about the country pub thing over the holidays, as I kept passing my local one (rumored to close soon) on my bike every day, and the absurdity of the situation just kept nagging at me in the midst of the many conversations I've had about new year resolutions, health, and transportation options over the past couple of weeks. We humans tend to underestimate the extent to which we are creatures of habit and followers of cultural trends. We hardly notice when self-undermining behaviour creeps into our daily routine, constraining our freedoms and diminishing our quality of life. I did not have a New Year's resolution this year. Instead, I took it easy, ate, rode my bike, took some photos, spent time with family, attended two wakes and a funeral, and simply felt happy in the freedom to cycle for fun, sport and transportation.
Labels: Ireland mercian stories