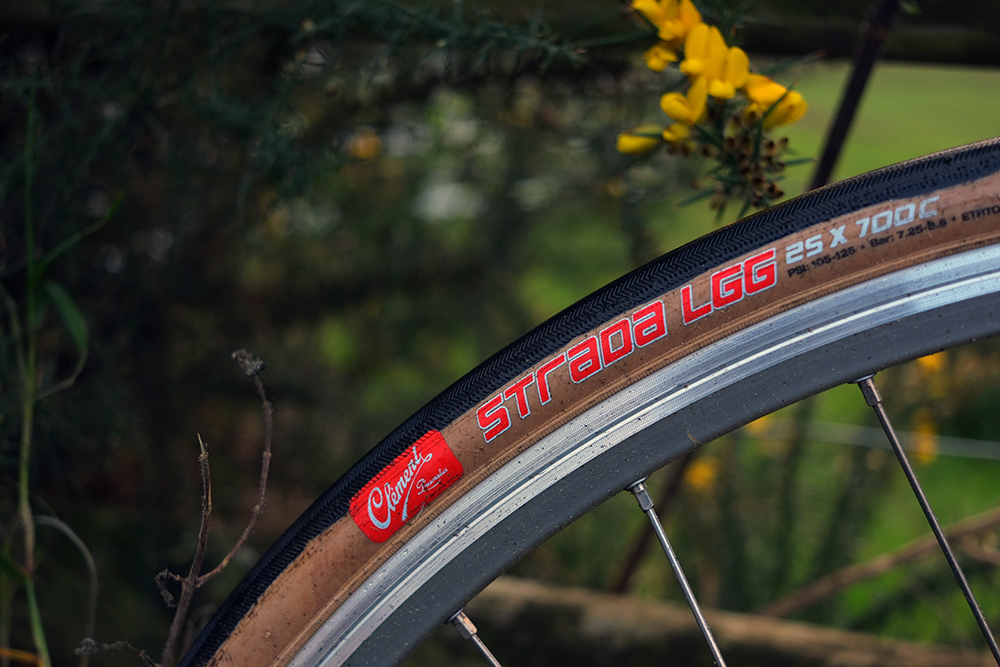 Since switching to Clement Strada LGG tires on my roadbike, I've had quite a few requests to review them. But how does one review tires? I have not used a sufficient variety of road tires to establish a solid basis of comparison. Still, I am so pleased with these particular tires, that I'd like to provide some feedback.

To put things in context, I will start by saying that my preferences in road tires (which for me, means 700C x 23-26mm) revolve around three main features: speed, comfort and durability. That is, I like a tire that is fast rolling, that feels plush and supple despite its narrow width, and that is puncture resistant. All three features are equally important to me - which, unsurprisingly, restricts me to a rather narrow range of options. There are plenty fast racing tires out there, but most tend to be delicate. There are now also many puncture-proof tires on the market, but most tend to be rather harsh or slow rolling. A perfect balance of all three features might just be too much to ask for. Still, after a few misses in the past I've been pretty happy with several makes and models of tires - in particular, with the Michelin Pro series, and the Grand Bois Cerfs. Both of these, I found, offered a lovely fast supple ride and resisted punctures on New England roads.

But in Ireland, things changed. Here, the jaggedly surfaced chipseal roads with their generous scatterings of thorny hedge trimmings practically ate my tires alive. Within days of cycling here, I got a flat on my 700C x 26mm Cerfs. I chalked this up to bad luck, but the following week I got another. Switching between the Cerfs and my 25mm Michelin Pros, I continued to get flats at a rate of about one per week, until - after an especially eventful flat on a high speed descent - my nerves couldn't take it anymore and I began to seek a more puncture-resistant option. 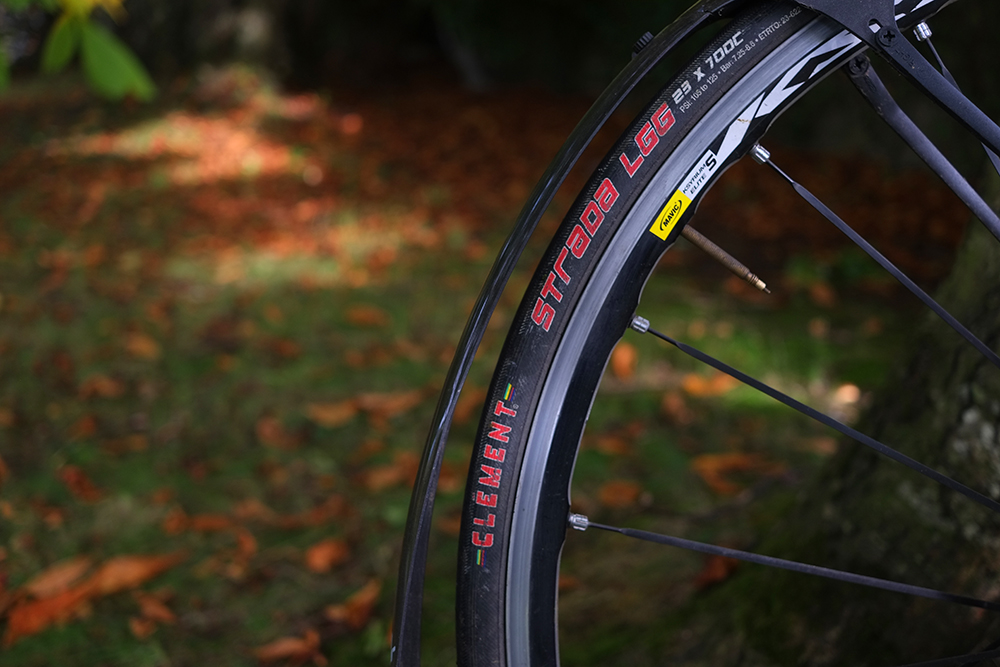 I forget now who exactly first mentioned Clement tires to me, but it was someone in the bicycle industry. The Clement name is an old one, and the brand was well known for their high quality Italian-made tubular tires back in the day. However, that Clement disappeared decades ago. The Clement that surfaced in 2009 licensed the name and created a new range of products "in the spirit of" the original brand (see here for the story). Their products were rumored to be excellent, and I was especially interested to learn about a road tire that, presumably, had superior puncture resistant properties without sacrificing performance.

Spotting this very tire in my local bike shop some days later cinched the deal. There I was, shopping for a new spare tube after yet another flat. And there it was - a shiny pair of Clement Strada LGGs glistening fetchingly with its beautiful logo typography. Ideally I would have preferred the 25mm width, but the shop only had the 23mms in stock and I did't want to wait any longer. Onto my roadbike they went and we rode off into the sunset, hoping for the best.

That was in August 2013. Now, 17 months and thousands of miles later (perhaps around 8K?), I continue to ride on the same pair of tires without a single flat so far (knock on wood) and with the tread still in pretty decent condition. Now, it could very well be that I'm just having a long, lucky flatless stretch on this bike and the tire switch was but a coincidence. But just in case it's not a coincidence, I bought a second pair of these tires last month when I brought my fixed gear over from the US. This time I special ordered the gumwall version in 25mm. 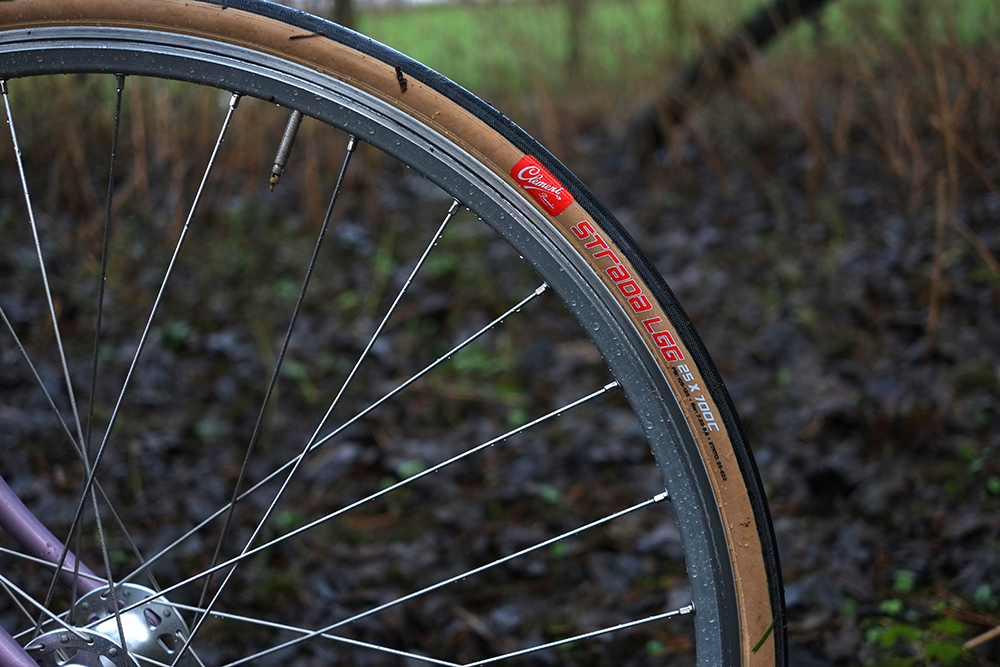 How do the tires feel? Fast. Plush. Noticeably stable in slippery conditions. Just overall beautiful. The 23mm blackwalls feel wider than they are. The 25mm gumwalls feel true to size. Overall the ride feel of the Strada LGGs involves the same sensations that I liked about the 26mm Grand Bois Cerfs and the 25mm Michelin Pros I switched from. Except, on Irish roads, they seem to be less flat prone.

Clement describe the Strada LGGs as featuring an "integrated puncture-protection belt." They do not elaborate on its technical features. But whatever those are, they've worked pretty well, and (as far as I can discern within the limits of my riding style) without adverse effects on performance or feel.

Named after the airport code for Liege, Belgium (after the Liege-Bastogne-Liege spring classics race), the Clement Strada LGG road tires boast a combination of lightweight construction, superior grip for wet weather conditions, and effective puncture protection. They come in a chevron tread pattern and are available in 23mm, 25mm and 28mm blackwall versions and 25mm and 28mm gumwall versions, as well as 25mm tubulars. Now an owner of two sets, I am a happy customer. If you're looking for a fast, comfortable, puncture resistant road tire, these are certainly worth considering.
Labels: product reviews tires