Making Friends with the Dark 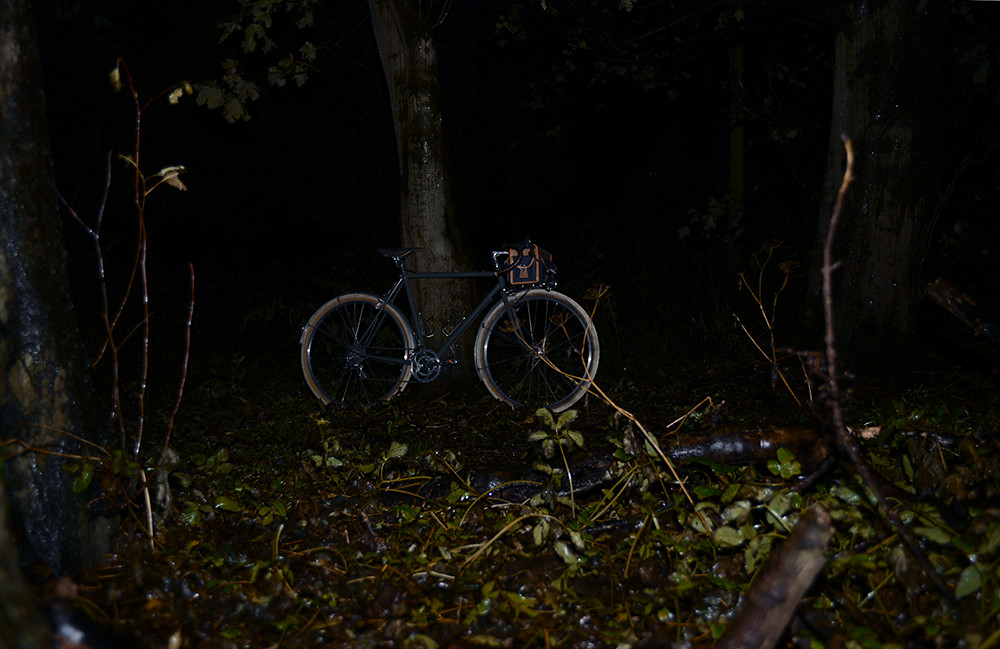 As the season of early sunsets descends upon us, many cyclists find themselves overwhelmed by the prospect of commuting in the dark. Now entering my 6th winter of relying on two wheeled transportation, I too find this aspect of things challenging - in particular since moving from a populated, well lit urban area to a remote, pitch-black rural one. But while it's certainly been difficult, it has not been impossible. And as I settle into another winter of moonlit trips along winding country roads, this time around I am finding it less daunting, more comfortable. To get to this state, it has helped to consistently follow a 2-prongued approach: (1) to always have good lights, and (2) to know the road as well as possible. It's an approach that's straightforward and commonsensical enough. But in the event this may prove useful to others, allow me to elaborate.


Taking lighting seriously
When it comes to riding in darkness, the importance of good lights may seem too obvious to mention ...except I've noticed that many cyclists tend to think of lighting as a splurge rather than a necessity. The number of times I see fancy, expensive utility bikes with cheap, inadequate headlights clipped to the handlebars like an afterthought never ceases to amaze me. This is probably because lights are still typically marketed as optional "accessories" in the bicycle industry,  portrayed as inessential to the cycling experience. But if you rely on cycling after dark for transportation and it gets dark at 4pm, then lights are in fact crucial components. Just as you need brakes that stop the bike and tires that hold air, you need lights that illuminate the road and won't conk out in the middle of a commute. Bearing that in mind, I suggest prioritising lighting in your overall budget. Save money elsewhere on the bike, but get the best lights you can: lights that are bright enough to properly illuminate the types of roads you'll be traveling on, and that rely on a charge system compatible with your lifestyle (more on that later).

Now, to continue stating the obvious... Merely owning good lights is not enough: You also need to make sure they are on your bike and functional when you need them. Even if you use detachable clip-on lights, once summer ends I suggest securing them to your bike permanently - that way you'll never forget and get caught out. Because that time you think "I'll not bother clipping a headlight on, since I'll be back before dark" will be the time you'll unexpectedly meet a friend and end up chatting or grabbing a drink, until - oops - you're stranded in the dark with no lights. Better to eliminate the stress and guesswork, by permanently securing lights to your transportation bike once it starts to get dark early.

Battery or dynamo?
The battery vs dynamo powered lighting debate, is one of charging logistics rather than brightness. And the choice is really up to you. Think of it this way: The goal is to not end up in a situation where your lights die on you in the middle of a dark commute because you haven't charged them adequately. With battery powered lights, this means that you will need to establish a religiously regular battery changing or charging routine. If you are the organised, diligent type who is good at that, then using battery lights could make sense, as it will save money and weight over dynamo-powered lights of the same brightness. However, if you're not confident in your ability to keep on top of the battery re-charging/ replacing process, or simply don't want to add yet another tedious task to your life, go with dynamo lighting and you won't have to worry.

Testing your lighting setup
No matter how well your lights are rated in industry reviews, you will need to test them thoroughly on your own bike and on your own routes to know whether they will work for you. Should the headlight be attached to the handlebars, fork crown, front rack? Where should the beam point? Will it be obscured by the front wheel or handlebar bag from certain angles? Will one headlight suffice? These questions and others can only be answered through experimenting with your setup. And don't be discouraged if getting the lights pointed just right proves difficult. Just make sure you test them in circumstances that resemble those of your actual commute as closely as possible. A setup that may seem fine in your driveway may not work quite so well when you're descending a hairpin road in the dark (a real feature of my commute, by the way)!

And when testing your lighting setup, don't neglect your tail light - after all, being visible from the rear is crucial to road safety. In particular, make sure that whatever part of your bike you attach the tail light to, keeps it stable. Saddlebag-mounted tail lights have a tendency to slip and point downward. Seatpost-mounted tail lights can rotate and point sideways if the attachment is not tight enough. Check for all of this, and again, under conditions similar to your actual commuting conditions. For example: deliberately go over bumps at speed to see whether the tail light slips.

Knowing the road
Lighting-related advice aside, I cannot stress enough what a huge, huge difference familiarity makes when cycling in the dark. The more remote, less illuminated, and trickier a road is, the more this applies. Luckily (and unlike, say, randonneuring) cycling for transportation typically involves everyday routes which we ride again and again. It is only a matter of time before those routes become familiar to us in the dark, under the limited illumination of our headlight beam. But it's possible to hasten that process by practicing dry runs along a commuting route that's either new or not yet familiar. This can be done first in the daytime and then in the dark, at a time when you're not in a hurry to be somewhere and can go slowly, or even turn back if need be. The more often you travel on any given road, the better you will know its contours, ascents and descents, the locations of its potholes and other danger spots - until you're eventually able to anticipate these things by rote memory. That tricky bend, that slippery railroad track, the unexpected stop sign at the bottom of a steep descent - you will discover you body anticipating them upon approach even before your powerful, well-angled headlight beam illuminates them before you.

Cycling in the dark - proper dark - is an advanced skill that not everyone is immediately comfortable with. But for those of us who rely on the bicycle for transportation, it is a necessary skill. And with some pro-active behaviour when it comes to lighting setup and route familiarisation, we can come to enjoy a new level of comfort and freedom in night-time commutes.

I think I realised that I had made friends with the dark when I deliberately turned of onto a forest path to get home one night. If I had thought the road was pitch black, this quickly put that idea to rest. It had just stopped raining and the droplets were glistening on the crooked black tree branches under the glow of my headlight like a scattering of tiny festive lights. I pedaled along the winding slippery path, as wet leaves made surprised squishing noises under my tires - finding it all beautiful and not at all scary, and humming "Hello darkness, my old friend."
Labels: Alice lights night time cycling rural cycling trails visibility