In and Out of Character 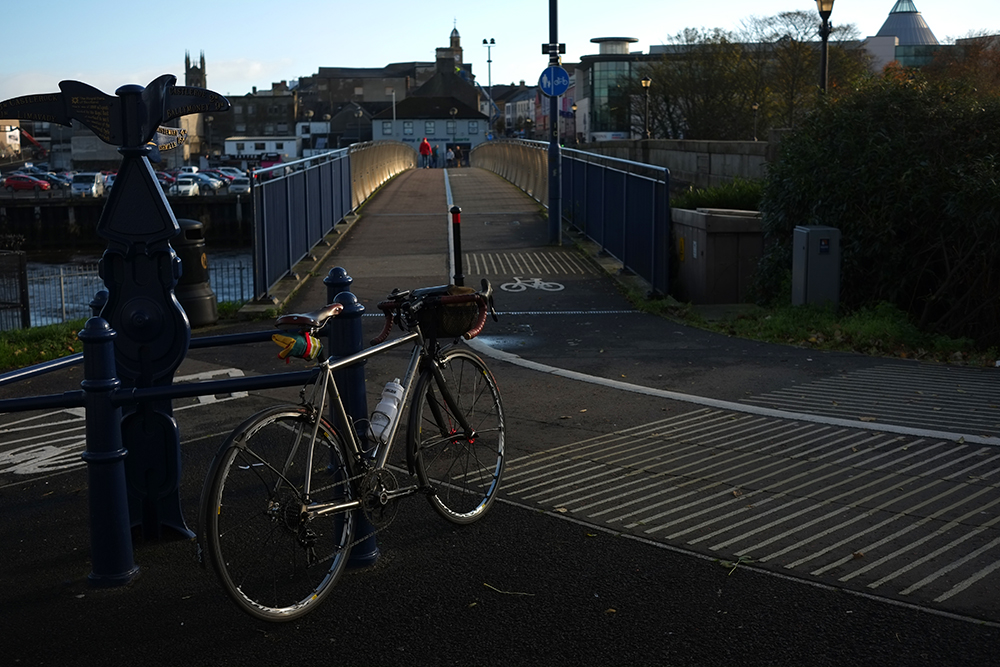 One afternoon not so long ago, I was doing something I don't normally do: riding my roadbike through a busy town center. I was cycling slowly, meandering really, taking in the sights. Then I stopped to take a photo of the sun setting over a distant scrap yard. As I admired the pastel heaps of debris whilst considering composition, a man walked past and turned his head to look at my bike. He then remarked offhandedly that it looked "out of character." What do you mean, I said. But before my words could reach him, he was out of earshot.


I replayed the phrase in my head a few times. Did he mean that the bike looked out of place in the town center? Or that its modern sleekness clashed with my clunky vintage camera and non-roadie attire?

Who knows what he really meant. But it got me thinking more generally about differences in character between types of cycling experiences. For example, in the comments of the earlier post about tracking milage, a reader made a distinction between the way she might feel on an exploratory ride with no pre-determined destination versus on a focused fitness ride. The differences can also pertain to the bicycle itself: the way a particular bike can "make" us feel and ride a certain way, influencing not only our riding style but our attitudes and behaviours whilst we are astride it.

It is this latter part I find especially interesting. When the current wave of urban cycling culture first began, there was a lot of talk of how upright city bikes cultivate a rider who is more relaxed, dapper, civilised, polite, considerate, observant, et cetera - in comparison to more aggressive roadbikes and "fixies."

Likewise, when riders unfamiliar with racing bikes first experience this breed of machines, they often talk about the seduction of speed and quick handling in a way that almost grants the bikes agency. In this type of narrative, the bike is a wild, unruly creature full of impulses and preferences - which their new owner might initially struggle to rein in, before ultimately succumbing to.

It's fun to think of bikes as having minds of their own. But it also begs the question: To what extent does the type of bike we ride really shape our behaviour? Were we to take a participant pool of cyclists and send each off on an identical ride on one of several types of bicycles assigned at random, would they really exhibit differences in demeanor? How would they score on various attitude and mood state tests?

The idea that a bicycle's "character" can impact our own, if only temporarily, is not a ridiculous one. In fact, fit alone can be the culprit. After all, decades of research have shown that posture affects mood - which, in turn, affects attitudes, behaviour and decision making.

It used to be that I experienced huge differences in state of mind when riding one type of bicycle versus another; with the bike's personality most certainly dictating my riding style. As I continue to gain experience and miles, I notice the effect diminishing. Today I feel perfectly capable of riding my roadbike in a way that's "out of character" for it - without feeling as if the bike is "making me" ride too fast or too aggressively.

I do love a bike with strong personality. Negotiating it, without compromising my own, is yet another exciting aspect of cycling.
Labels: commentary