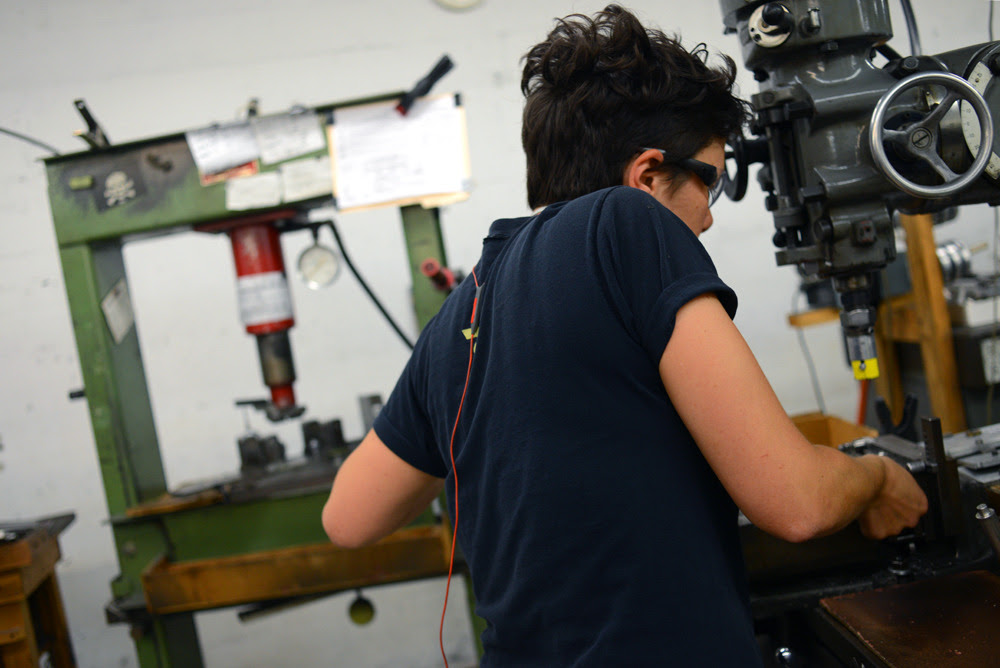 Once in a while a really cool job announcement comes up in the bicycle industry and gets passed around via social media, in a way that you can practically hear the frenzied oohs and aaahs and "wish I could"s echoing through the ether. Oftentimes the job's awesomeness is matched only by its utter impossibility. Like the time a well known framebuilder out in the middle of nowhere was hiring an apprentice, requiring relocation to his remote abode and a 2-year commitment. Or that time a fancy cycling clothing manufacturer was seeking an account manager fluent in French and Japanese (and/or Hebrew). The professor in England recruiting an assistant for bicycling-related research, Masters degree in Psychology and 6 recent publications a must...

In cases like these, the sheer unlikeliness of these positions make them all the more entertaining to contemplate, placing them firmly in the realm of fantasy. Other bike job listings are more accessible. When hip component manufacturers or quirky world-famous bike shops are hiring, their fans know all about it, and - even if their educational backgrounds and career experiences are far removed from the bicycle industry - cannot help but imagine, if only for a moment, dropping everything and rushing over to work there, surrounded by their favourite bikey products, industry personas, and plain old fabulous bicycle vibes.

I would venture to say that most of us, regardless of our current employment or lack thereof, have at some point fantasised about a dream job in the bicycle industry. So what's yours?

For me it is a 3-way tie. With some regularity, I fantasise about being a part of the R&D team at Seven Cycles. Not only do I love their bikes, but the people who work at Seven are wonderful and the atmosphere in the shop is an intriguing combination of exciting and calming. Participating in the development of new commuting, mixed-terrain, and long distance bicycle models, complete with integrated racks, lights and such, would be a dream. Especially if testing them thoroughly during work hours is part of the job description!

Likewise, I often dream of being a product designer at Ibex. Over the years I have become a huge fan of this small Vermont company, to the point that now, of the non-DIY items of clothing in my wardrobe, there are probably more with an Ibex label than any others. I love the feel and quality of their wool, their tailoring, the versatility of their designs across weather conditions and activities. And hey, I already torment them with product feedback, ideas and requests anyhow!  In my fantasy, I take part in developing gorgeous cycling-friendly outfits, after which I (of course) diligently test them out on various types of bicycles. And this being Vermont, it goes without saying that in the winter I shall require a fat bike.

Finally - and this one is pure fantasy, as I am pretty sure no such position exists or ever will - I would love to be a traveling researcher for Compass Bicycles/ Bicycle Quarterly Press. I mean, Jan Heine is a busy man, right? Surely he could use a helping hand with all those trips to research the heck out of obscure vintage bicycle manufacturers. In my fantasy, I spend my days crawling around the dusty attics and cellars of old collectors in remote corners of Europe, photographing and cataloguing to exhaustion, and my nights madly scribbling notes on my findings by candle-light - which will then be promptly compiled toward the next hardbound, breathtakingly illustrated tome. Naturally, I shall be given the company vintage Rene Herse mixte for my travels.

While I've no plans to seek 9-5 employment any time soon, if I were to look in the future it would be in the bicycle industry and not in my former line of work. Despite its paucity of decently paid job prospects, there is just something about the bike world that's pulled me in and won't let go, for better or worse.

For whatever reason, the start of this winter season seems to have left quite a few of the bikey people I know "in between jobs." And I get the impression a lot of bike shops are doing the off-season layoffs early this year. I only wish I had some useful advice for those looking for real work in the bicycle industry this season. Based on what I have seen, twitter seems to be the most fruitful source for job announcements. The Alliance for Biking and Walking features a Job Board and includes a roundup of latest job listings in its weekly newsletter. Various bicycling forums will sometimes post job listings. And the Wheelwomen Switchboard has recently launched a job listing service that actually appears to be frequently updated. Aside from these resources, I would say it is worth writing to the companies you'd like to work for with a straighforward, enthusiastic expression of interest - I know of several folks for whom this strategy has worked over this past year, and the companies they approached weren't even officially hiring. It is tough out there, but you never know - a dream cycling job could become a reality.
Labels: bicycle industry