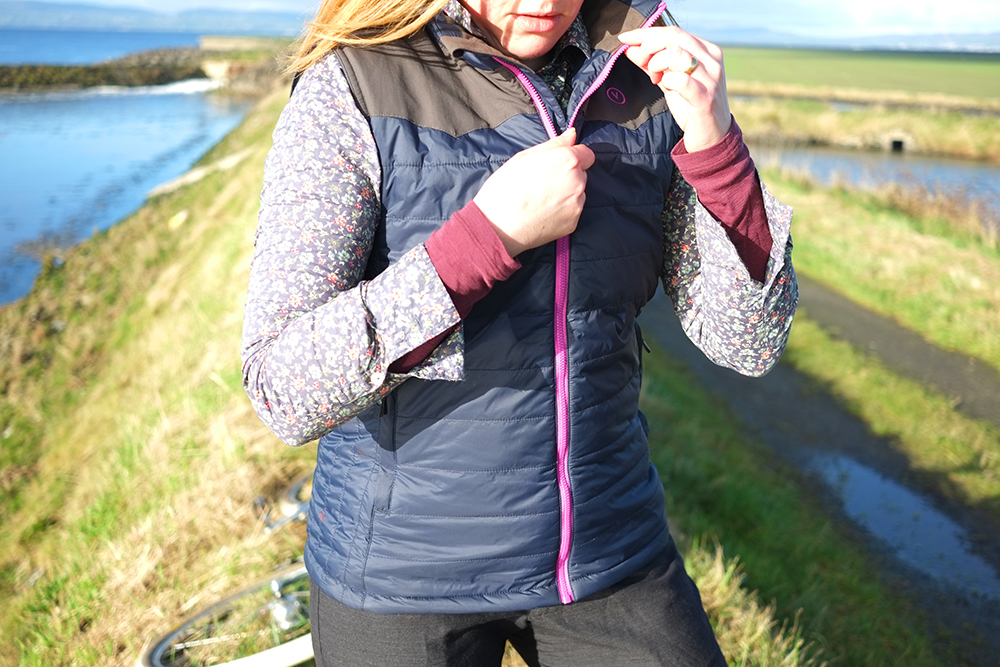 For wandering about outdoors in cool weather, I have long been a fan of the down vest (or, as it's known in the UK, the gilet.) Allowing my arms to move without constraint while enclosing my torso in what's essentially a wearable winter-weight duvet, the vest/gilet has been a wardrobe staple for nature walks and photo expeditions since my teenage years. I have not, however, found this garment to be ideal for cycling. The prototypical EMS and the LL Bean vests I'd owned since my pre-bicycling days proved both too short and too heavy for the bike, overheating my torso while at the same time exposing a good chunk of my lower back to the frigid wind. They also pulled at the sleeve openings and bunched up around the tummy area uncomfortably on anything but the most bolt-upright of machines. And so, what was once a wardrobe stable became relegated to the back of said wardrobe once I switched to life on two wheels. But that did not mean I didn't miss the mighty down vest. Which is why when Vulpine released their cycling-specific puffy gilet, they immediately had my attention. Available in navy or red for women, and in navy, charcoal, or marigold for men, the Vulpine Ultralight Quilted Thermal Gilet is priced at £119. I've been testing this vest for a couple of months now, and over that period of time I've found myself wearing it at some point of nearly every day, on the bike and off. 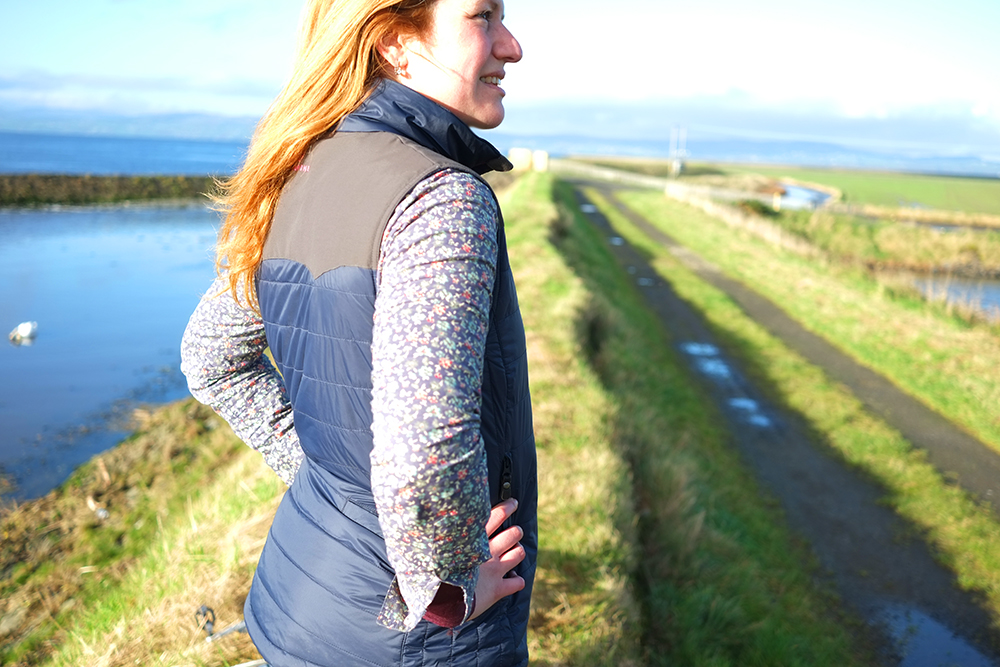 One feature that makes the Vulpine gilet work well on the bike is the fit. This vest is cut long, so that even in a drop bar position it cannot ride up in the back to expose any skin. In the front, it is roomy, yet somehow resists bunching up. The women's version is cut generously in the midsection, while also adhering to the curves of the female figure. The result is a sensation of wearing something comfy and loose, combined with the appearance of wearing something quite tailored. I find the vest to be true to size and relaxed in fit. I am normally a US size 4 (UK size 10/12, EU size 38), and the size Small fits me with room for several layers of clothing beneath. In these photos I am wearing the gilet over 3 layers: two wool long sleeve tops and a button-down shirt. 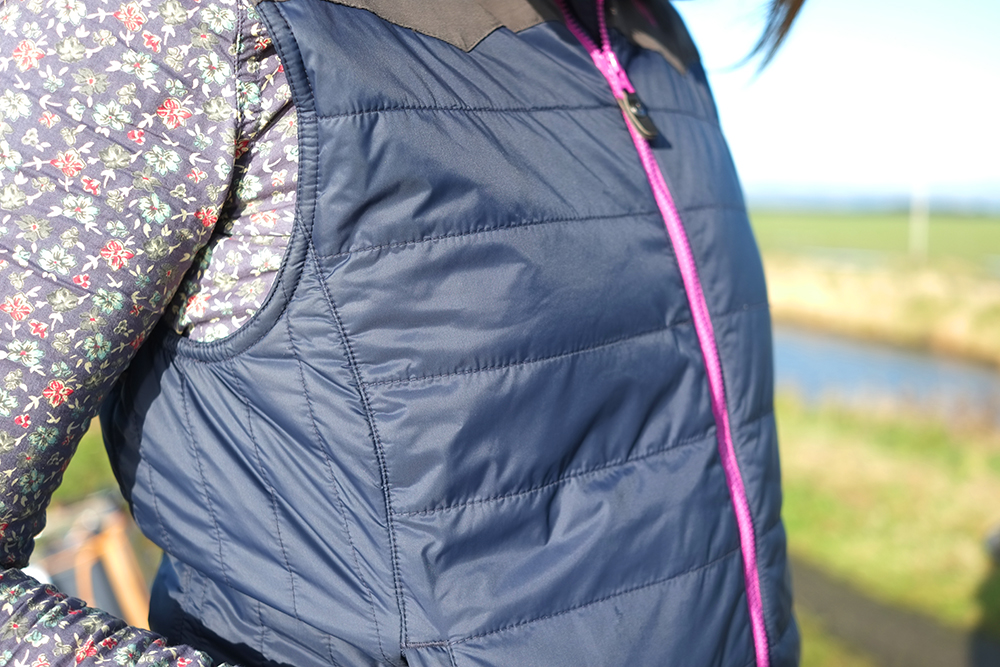 The sleeve openings are cut generously - but with a subtle stretchy action happening, preventing the openings from gaping and letting cold air in. The soft finishing of the edges further prevents them from pinching or cutting into the skin if you stretch your arms way forward. 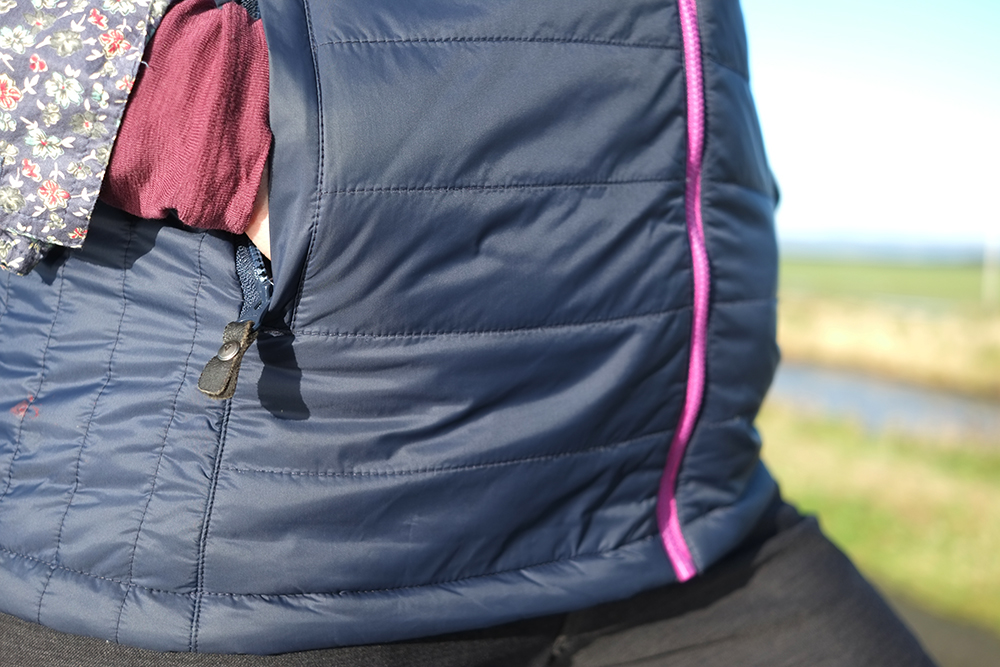 The gilet's two front zip pockets are so low key, they would hardly be noticeable if it weren't for the V-stamped leather tabs - which makes it all the more surprising how enormously deep they are. I can fit a large SLR camera lens in each pocket easily - which comes in handy, as it allows me to avoid carrying a photo bag. And while that's not a bicycle specific feature in itself, what's interesting is that when I place something heavy in a front pocket of this vest, I do not notice the weight puling down much in a leaned over cycling position. This is a contrast to my experience with other tops or jackets with large front pockets, where I've found that even if the pockets can fit stuff, it's just uncomfortable to carry weight there while cycling. The fabric of this gilet must be quite sag-resistant to eliminate this issue. 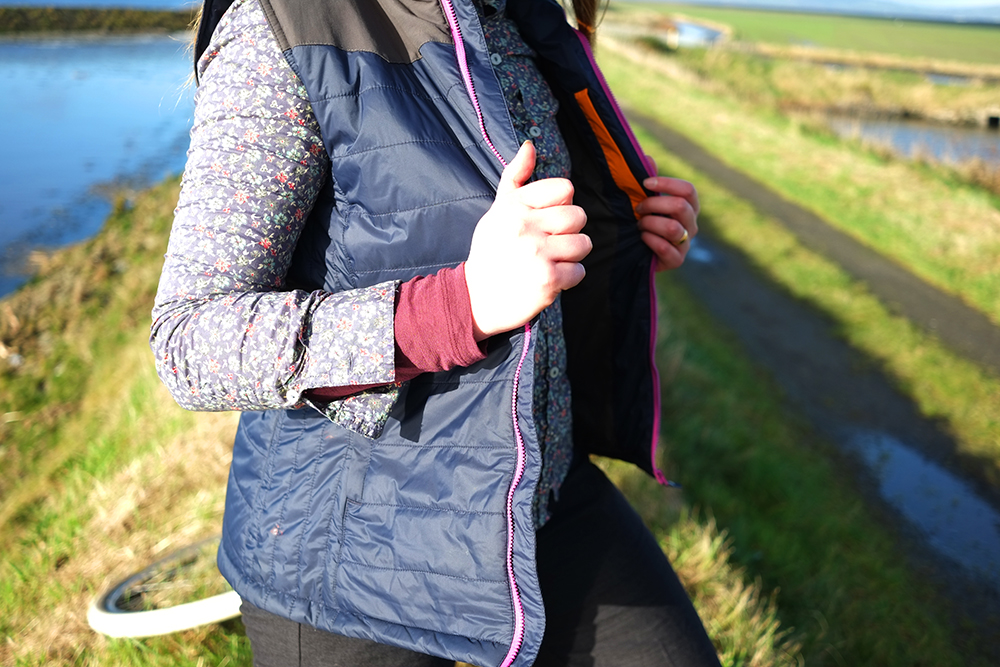 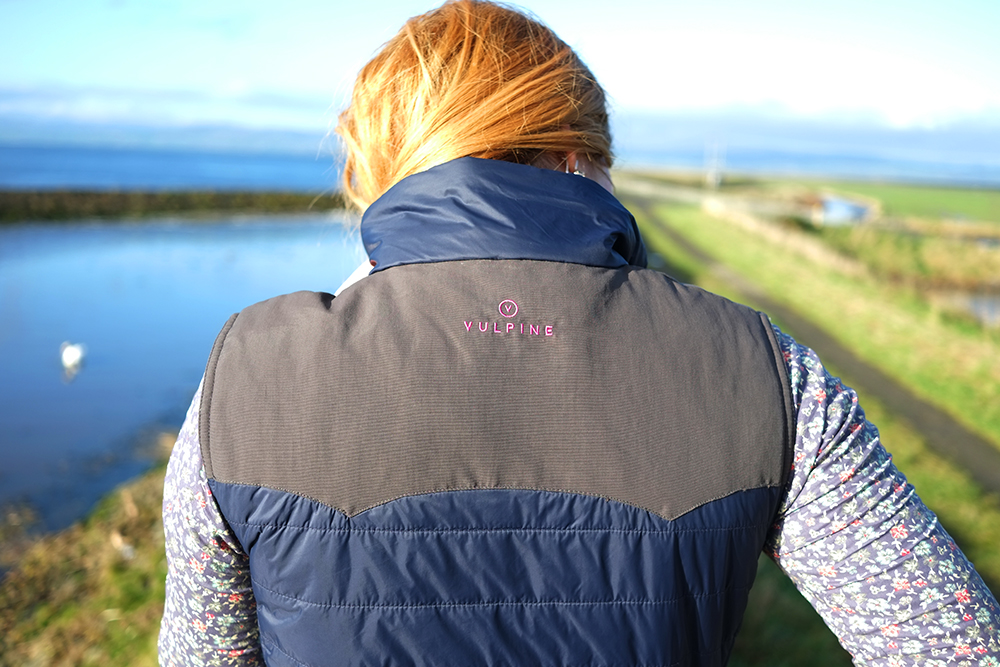 The high neckline provides extra wind protection when on the bike, and the shoulder panel is constructed from a material that is meant to resist abrasions from backpack straps. 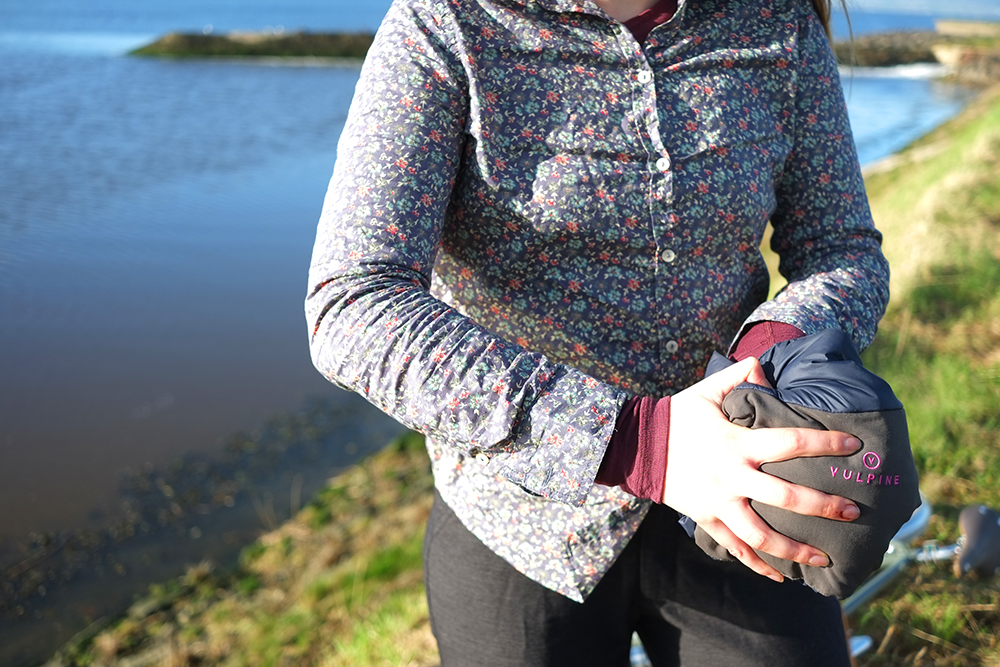 The other notable feature that makes the Vulpine gilet a good choice for cyclists, is its compactness. The nylon shell is filled with Primaloft Gold synthetic down alternative, which feels barely 2mm thin when pinched between the fingers. The entire vest crumples up into a tiny ball, which fits easily into a small handlebar or saddle bag and even in some jersey pockets. Because the weather can change so quickly here in Ireland, this is a much-appreciated quality in any piece of outerwear. 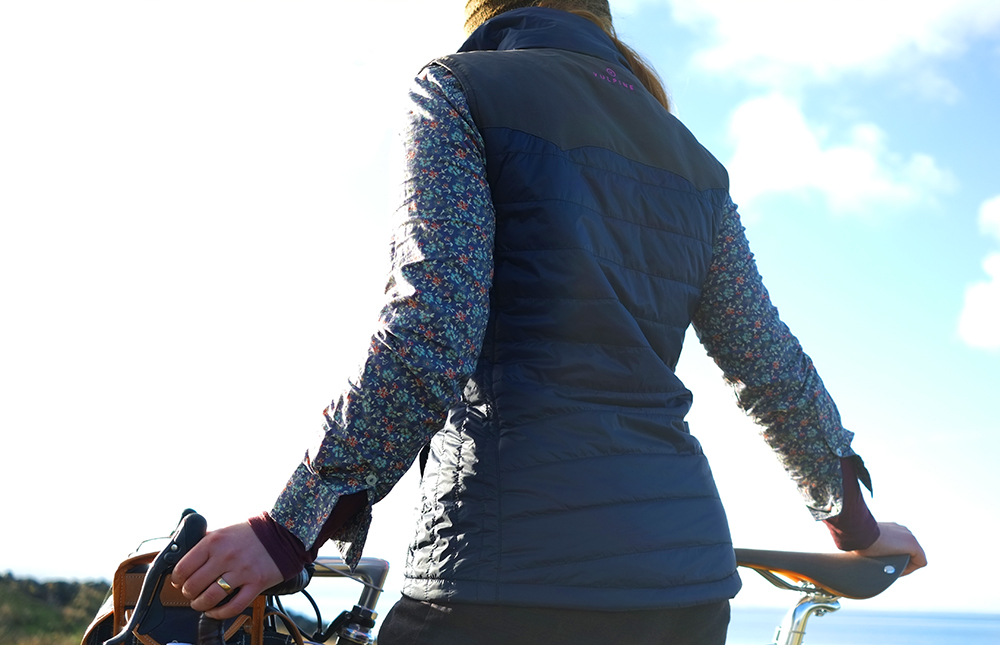 Importantly, the Vulpine gilet strikes a good balance between warmth, windproofing and breathability. When cycling for transportation I can wear it over a wide range of temperatures without overheating. On a roadbike that range narrows, and it needs to be quite a bit colder for the vest to come out. But even on a roadbike it works well for those days when the temperature starts out freezing in the early morning, then spikes an hour or two later. I can wear the gilet to warm up, then stash it in a bag or pocket.

Finally - and granted, this might be just a personal neurotic thing (Ed, just listen to this!!) - but I love that the Vulpine gilet is silent. I find that a lot of nylon outerwear makes annoying swishing noises when I move around in it, which especially drives me nuts when I pedal and the noise becomes rhythmic. This gilet doesn't make a peep, no greased cotton balls required. 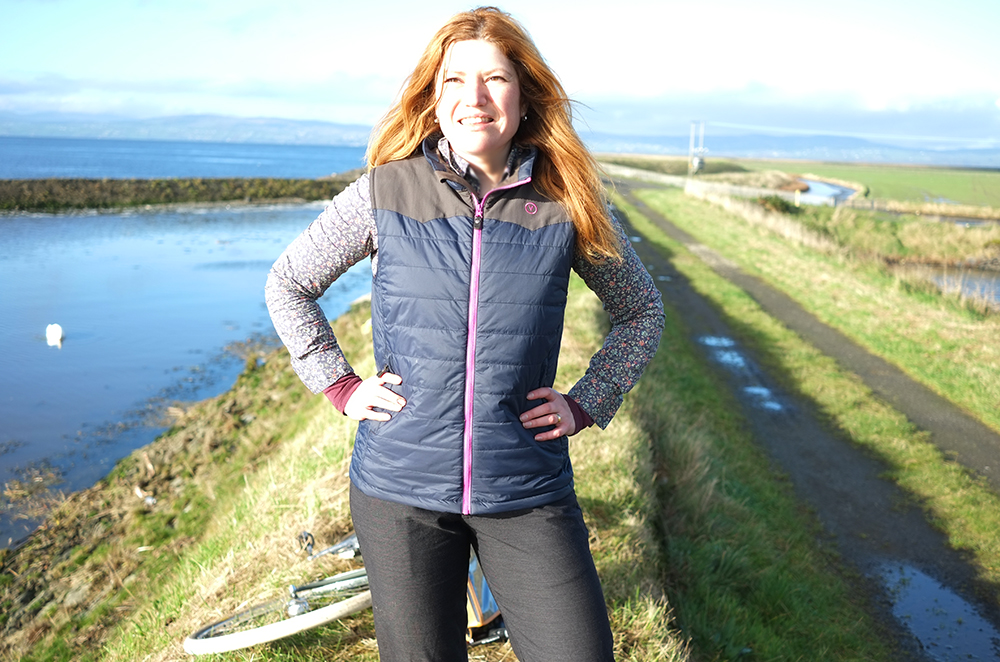 (I am smiling, because of the silence. And because I've stashed an 85mm lens in my pocket and no one is the wiser.)

As far as critical feedback... truthfully, I've had a hard time coming up with any. Fans of hi-vis will be disappointed that this gilet absolutely lacks any reflective elements. But I'd rather have it this way myself, as it makes the vest more versatile for off the bike daywear. I am not crazy about the shade of magenta they used to contrast the women's navy blue colourscheme, but that's a matter of personal taste and doesn't bother me that much anyhow. The only thing I can really think of, is that I'd love this vest even more were it equipped with a two-way zipper for a wider range of ventilation options. Perhaps on a future rendition?

I've been testing Vulpine products since they opened up shop, and the Women's Quilted Thermal Gilet is my favourite piece so far. I was looking for a versatile, reasonably attractive puffy vest that could be worn on and off the bike, and this lovely thing fits the bill better than I'd hoped. I should also add, that to equip a women's garment with huge, useful pockets without making it look bulky is no small feat. Thank you, Vulpine, for reinstating the vest - erm, gilet! - into my cold season wardrobe.
Labels: product reviews Vulpine