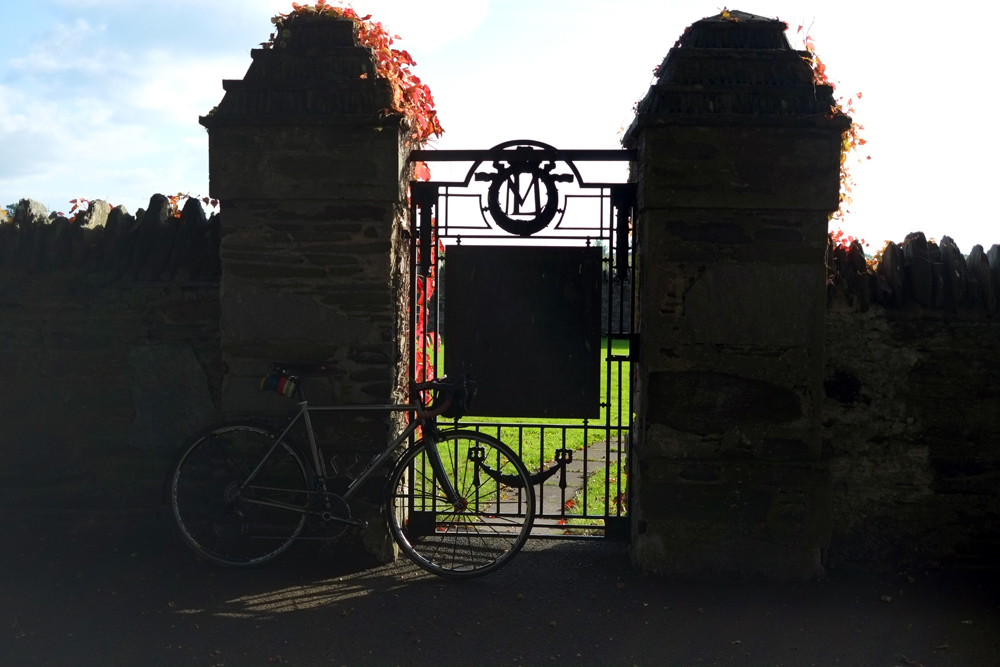 Last year I was away from Northern Ireland for most of October. And as far as Autumn scenery, I'd assumed I wasn't missing much. From having lived in England in my 20s, I remember this time of the year being rather bland. As summer came to an end, at some point the leaves would start to change from green to a sad yellowish brown, promptly shriveling in the process and disappearing altogether soon after. I assumed it'd be more or less the same over here and did not harbour expectations of remarkable foliage. But oh how wrong I was! 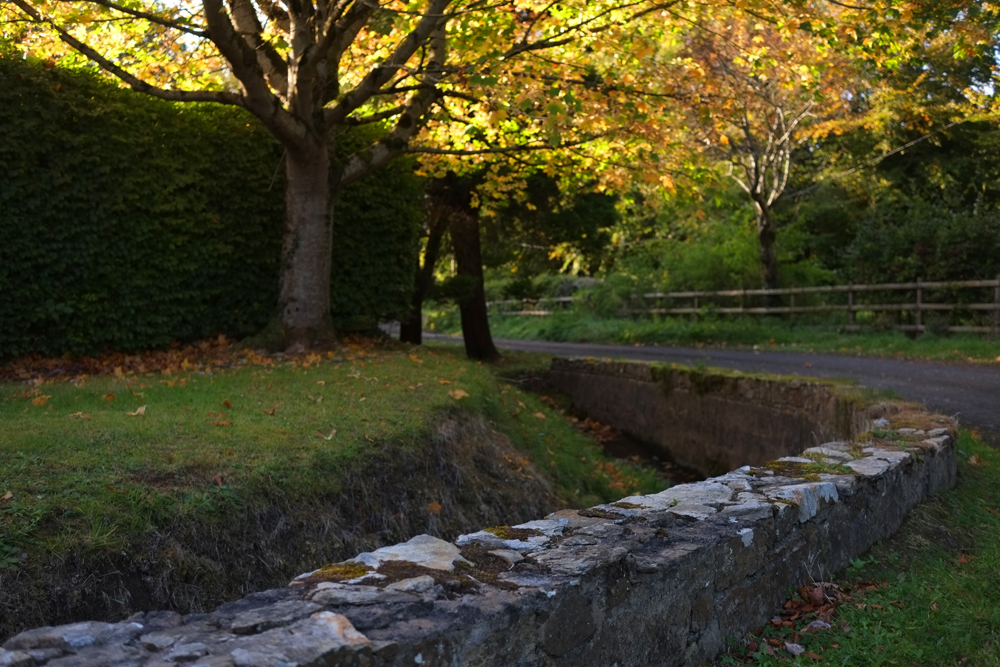 These days I have difficulty riding my bike without craning my neck to gawk at the magnificent colourbursts that pepper the landscape. The Autumn foliage is not as pervasive as it is in Northeastern US. Rather than a blanket of colour, here it comes in patches. But if anything, this only makes it more striking. An impossibly luminous golden tree stands in a clearing of a drab green forest. And on this crisp, chilly day, passers-bye can't help but orient themselves toward it, as if it were a giant hearth emitting not only light but warmth. 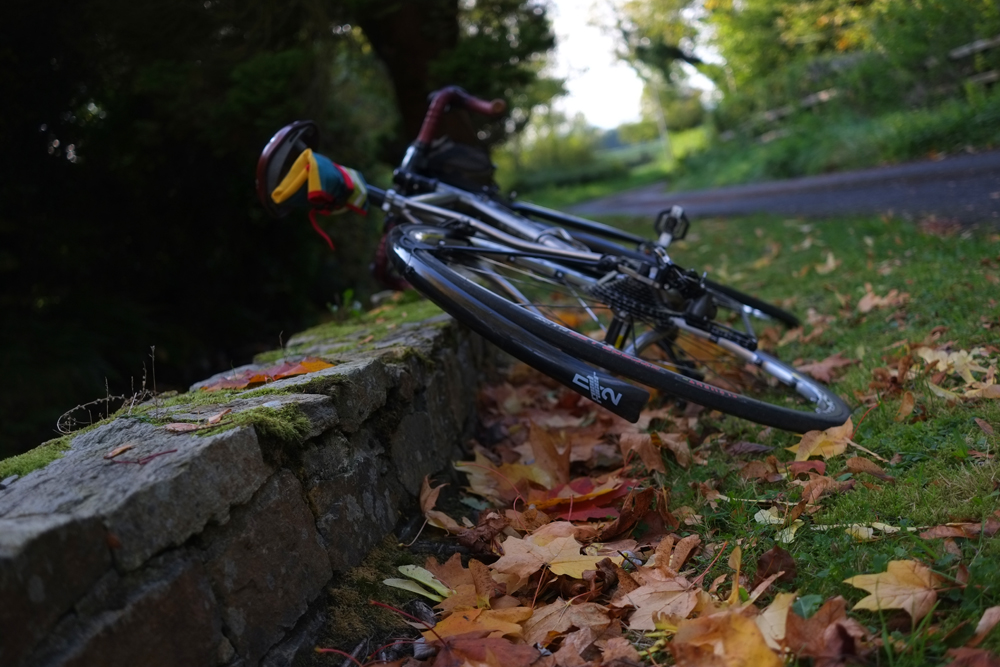 The tree's sprinkling of fallen leaves covers a mossy embankment, lighting up the dark, pine-shaded corner with a brassy glow. The leaves smell forest-spiced and sun-toasted, without a hint of rot, suggesting - falsely - a climate of crisp sunny afternoons rather than days upon days of overcast dampness. 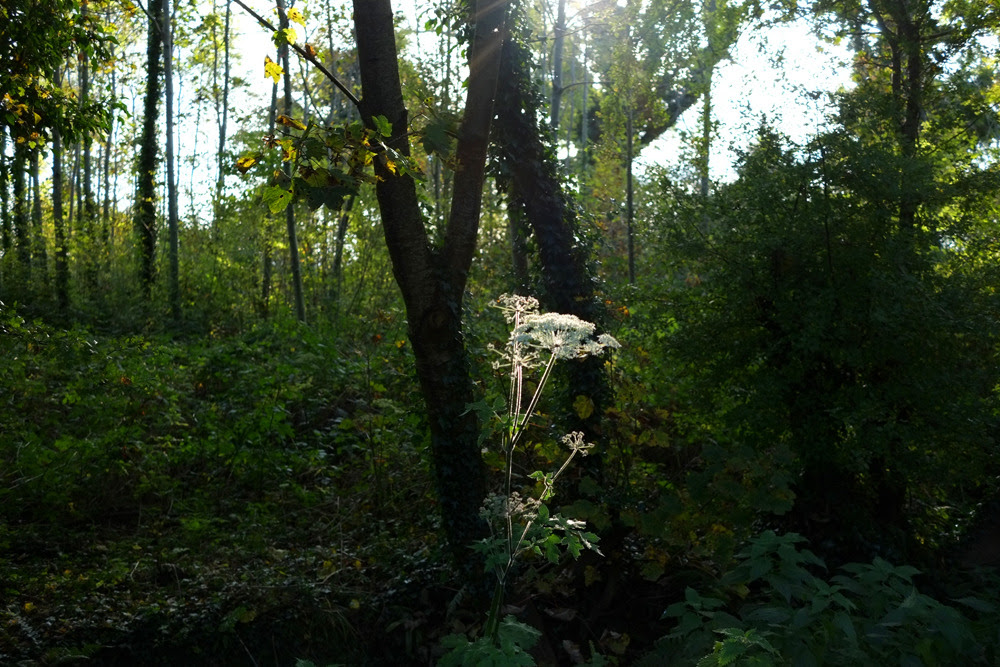 I have noticed other instances of this magical crispness that preserves plants from summer wholly, like pressed flowers in the pages of a book, rather than letting them rot away slowly in the season's demise. The meadows are strewn with blanched, bone-dry stalks of Queen Anne's Lace and the gardens are lined with perfectly dried Hydrangeas. 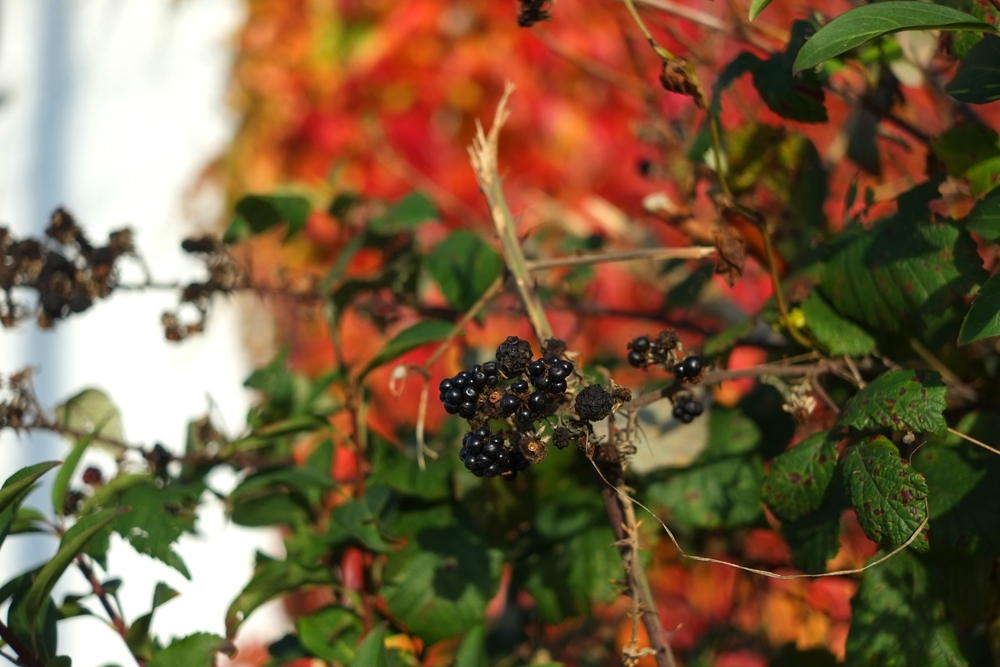 Blackberries hang on to their edible plumpness for as long as they can, until one day they turn into sundried candied kernels, with no wilting process having taken place in between. 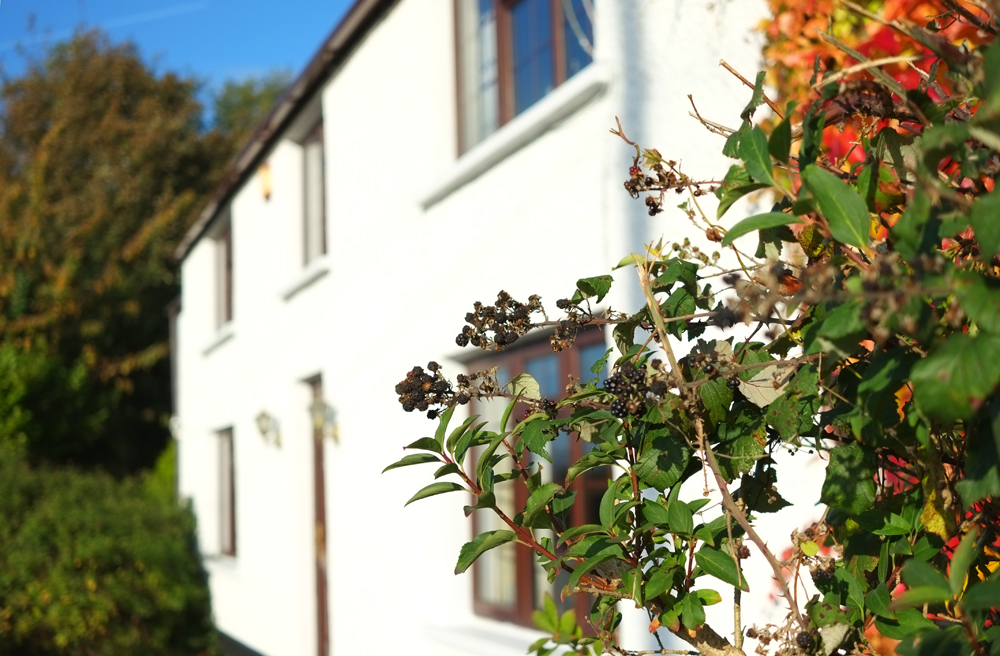 It's as if someone waves a magic wand and the berry gives up its juices on the spot to the crisp Autumn air, its remains now exuding a subtle, jammy perfume. 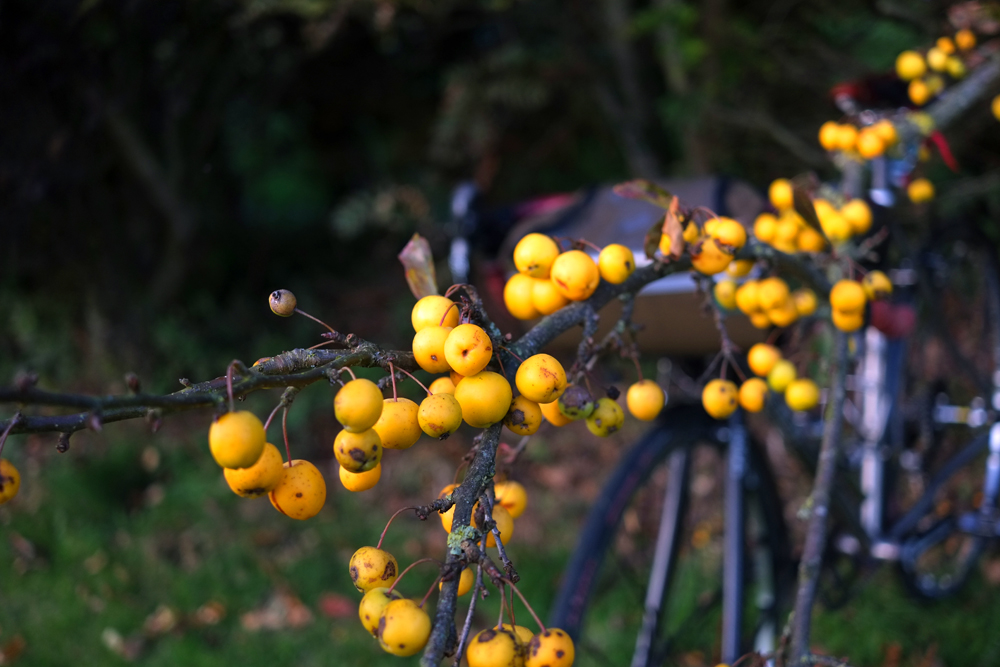 Elsewhere, fruit at once familiar and strange ripens heavily on twig-like, moss covered branches, glowing in vibrant shades of gold, red and plum. 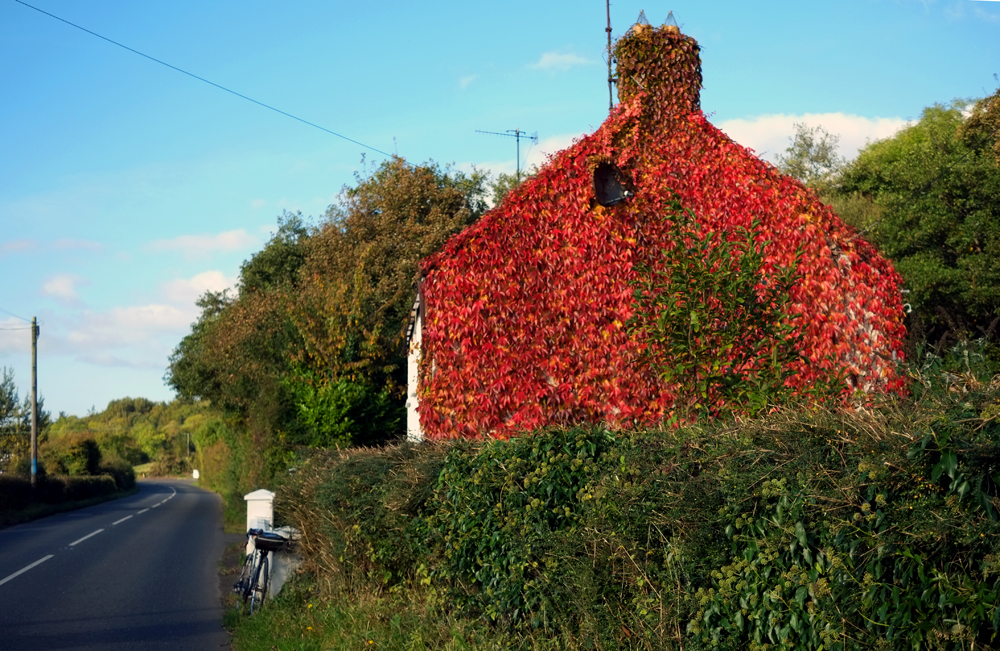 But the most amazing sight of all is the ivy. Flame red, it covers the white exteriors of cottages, the gray stone walls of church yards. 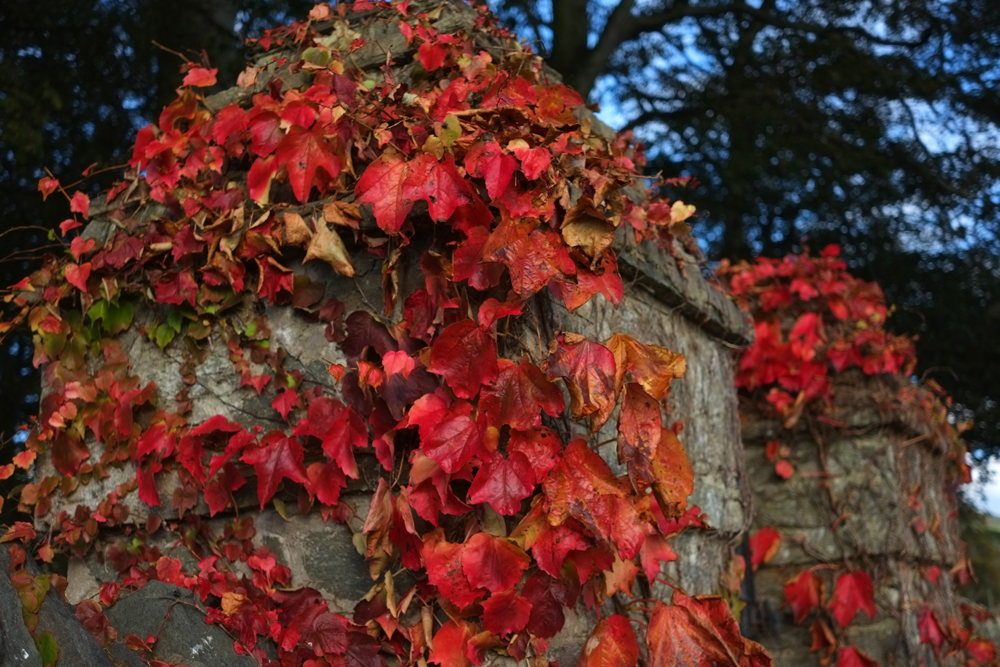 The ivy leaves are supple and waxy, showing not a single sign of dryness. From last year I try to remember what becomes of them as the season goes on. What happens to ivy in winter, and how will it get to that state from its current rich, oily, crimson splendor? 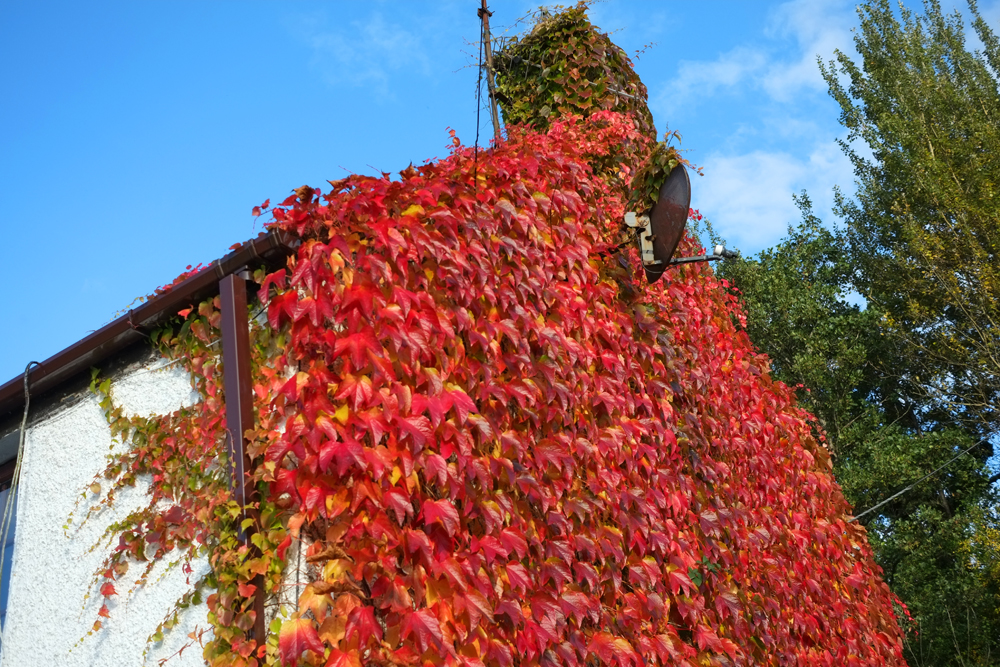 For a moment, thinking of this evokes an image of human red hair, year by year losing its lustre, thinning and turning gray. Autumn's inevitable waning does bring to mind aging, hence its sad and sentimental connotations. I, however, am, more than anything, curious. And this curiosity makes me feel awake, not sad. It makes me want to get out on my bike and ride past all the ivy-covered stonework I can find and take it all in. 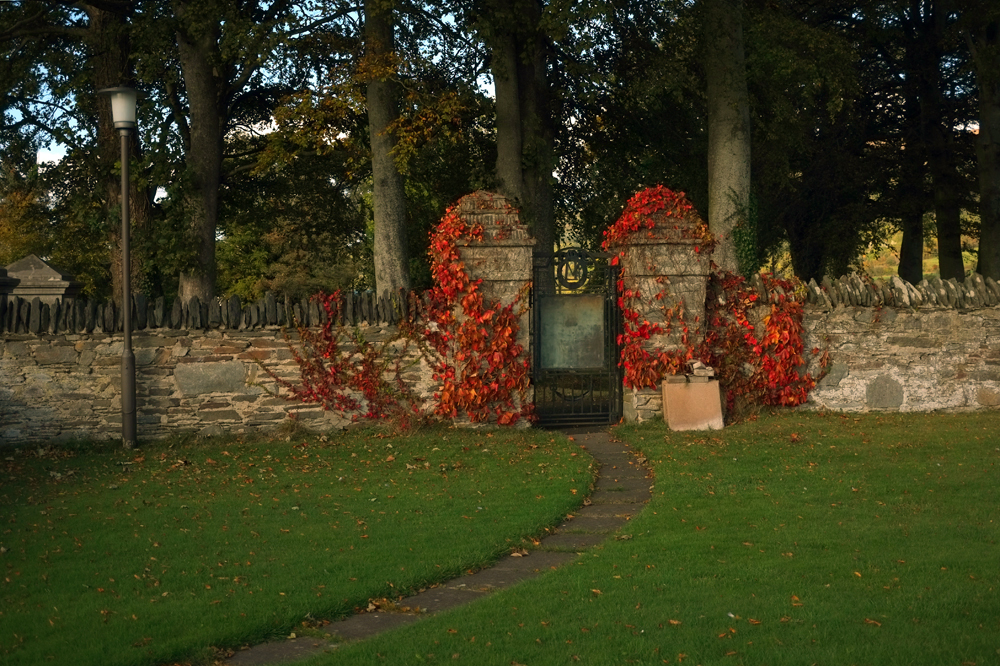 We think of Autumn as a transitional, transformative season. It is a shapeshifter - with the light, the landscape and the weather changing rapidly on an almost daily basis, until it all settles down into the more solid and stable state that is winter. In that sense, Autumn can be conceived as a journey of sorts. And in Northern Ireland this year, it is an exceptionally beautiful one.
Labels: autumn Ireland