Turning Heads (and Headtubes!) On a 19th Century Rudge 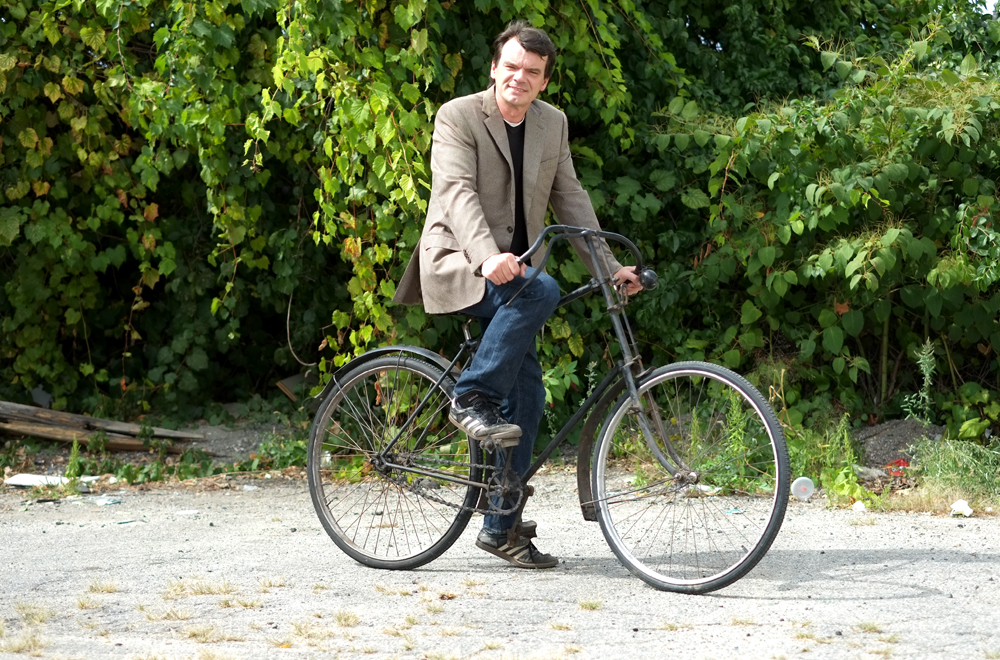 In the realm of collecting old things, a distinction is generally made between the vintage and the antique - the latter typically defined as being over 100 years old. When it comes to bicycles, my interest in this category has been limited to detached historical curiosity at best. It’s not that I don’t appreciate early two-wheeled machines. But oftentimes they are just too far removed from the bicycle as we know it today, for them to register in my brain as bikes and excite me on the same tactile, visceral level.


And that is pretty much how I felt during one of my visits to the Three Speed Hub, when proprietor Nick pointed conspiringly to a shadowy corner of his warehouse space and waited for my reaction. The enormous object that stood there resembled a bicycle in form, but at the same time deviated from a bicycle in subtle, yet significant and somewhat disconcerting ways. 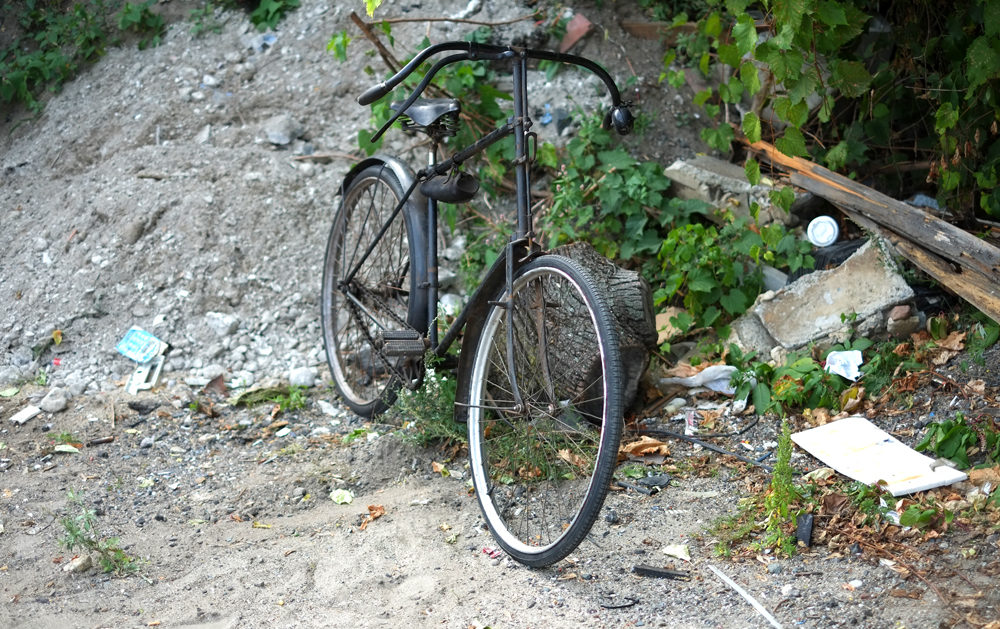 Ah, 19th century. I had guessed as much. I regarded the thing politely and asked some questions about its history, all the while longing to resume fondling the 1950s Oscar Egg that was more in keeping with my interests.

“And just wait till you see how it rides!” Nick continued.

I snapped out of my daze. “Oh, is it ridable?” I said, as casually as possible, while uttering a silent prayer that he wouldn’t attempt to convince me to try it out.

“It’s ridable all right, you’ve never seen anything like it! Here, let's take it outside and you can give it a go…”

“Why don’t you ride it and I’ll photograph you,” I offered instead, following apprehensively. Nick is of the breed of collectors who believe that all bikes - no matter how old, precious, or rare - ought to be ridden. In the past he had tried to coax me onto all sorts of machines, regardless of their size, decrepitude and trickiness to handle, with varying degrees of success. But I would rather forego this century-and-a-quarter old beast that was clearly several sizes too large for me. 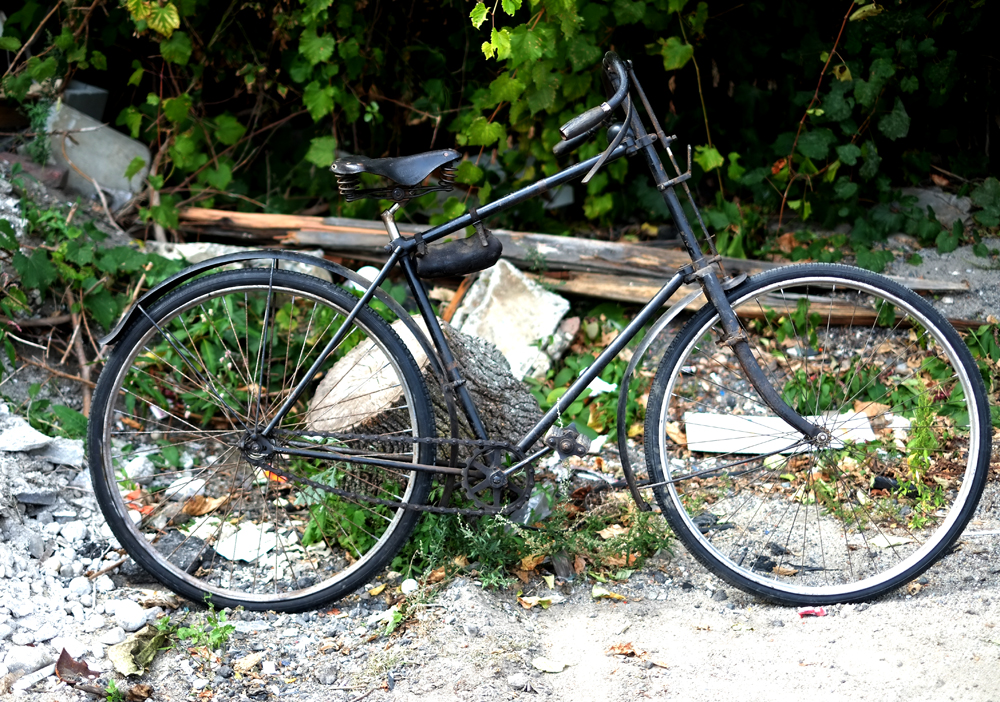 Outside I had a closer look at the Rudge's construction. The dramatic, almost Pedersen-like slope of the top tube gives the bicycle an intimidating, oversized appearance. However, the saddle's position suggests it can be ridden by considerably smaller persons than it may at first appear. Another oddity I soon noticed is that the front wheel appeared to be smaller than the rear. I asked Nick about this. Initially he had assumed the front rim was a modern replacement, smaller than the rear because the previous owner could not get ahold of the period-appropriate size. However, he soon learned that the mismatched wheels are most likely correct and an original feature of this model - which is a rare 1892 Rudge Model D, nearly identical to the bicycle pictured here. 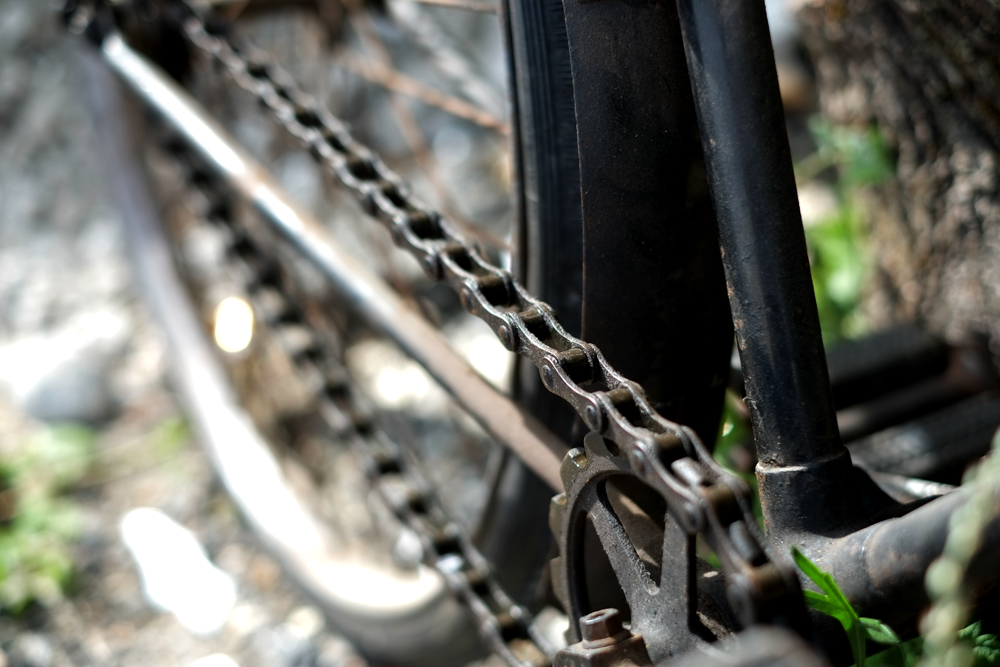 Another remarkable feature I soon observed was the monstrously thick chain. 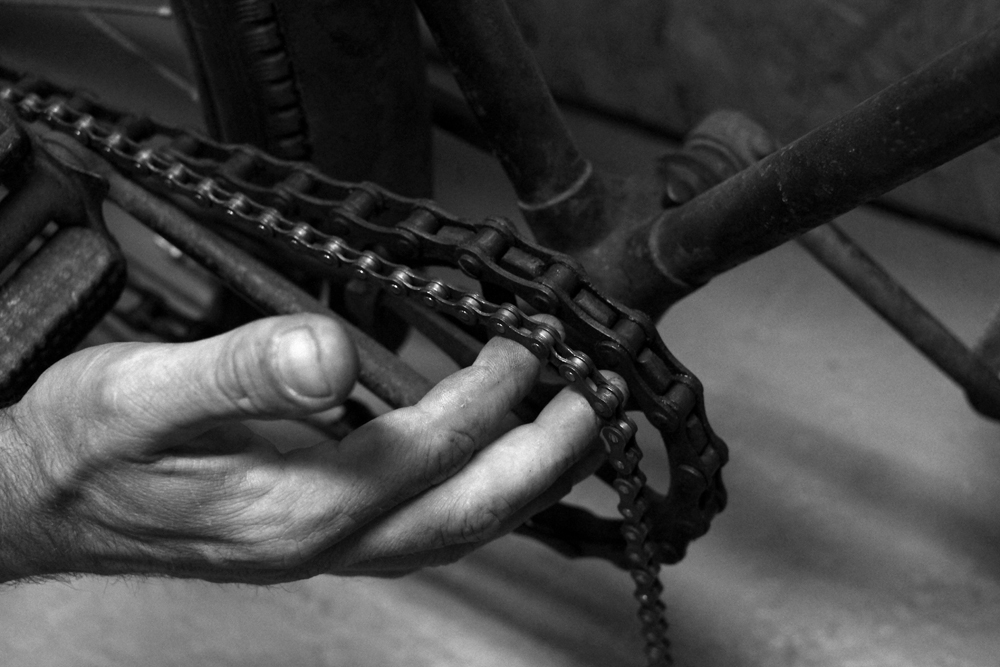 Here it is next to an (already oversized by current standards) early 20th century roadster chain. 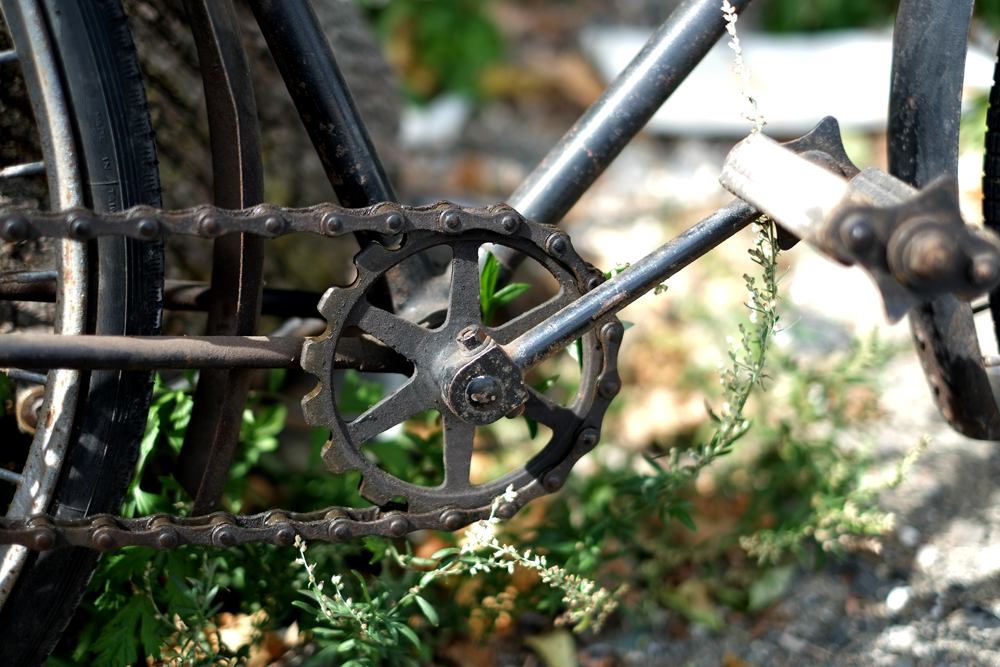 And notice the flat teeth on the chainring, to accommodate it! 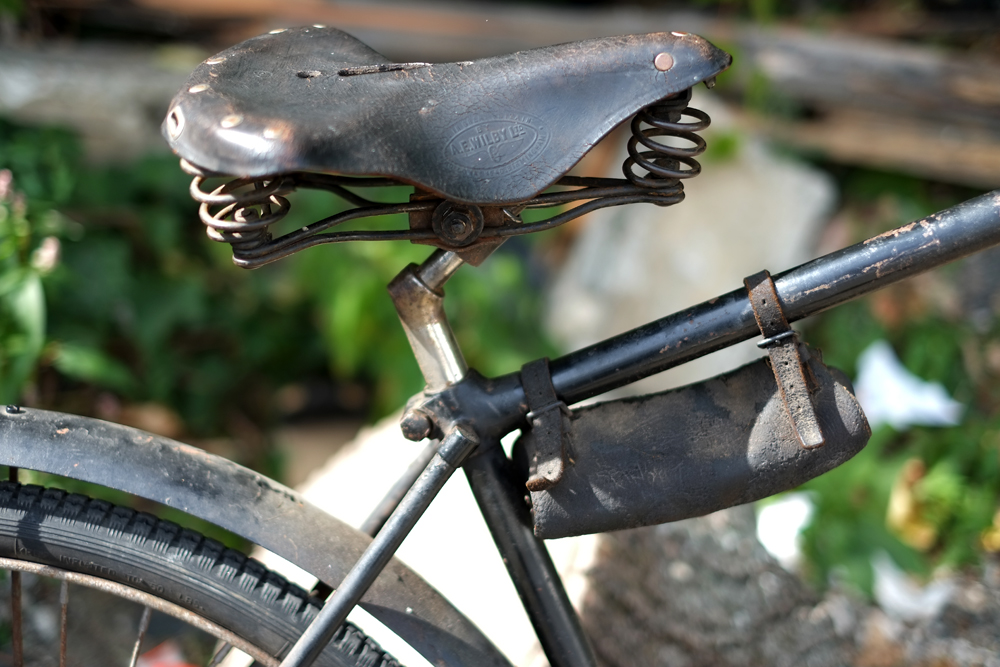 The reverse-setback seatpost beneath the sprung A. E. Wilby saddle is also interesting. 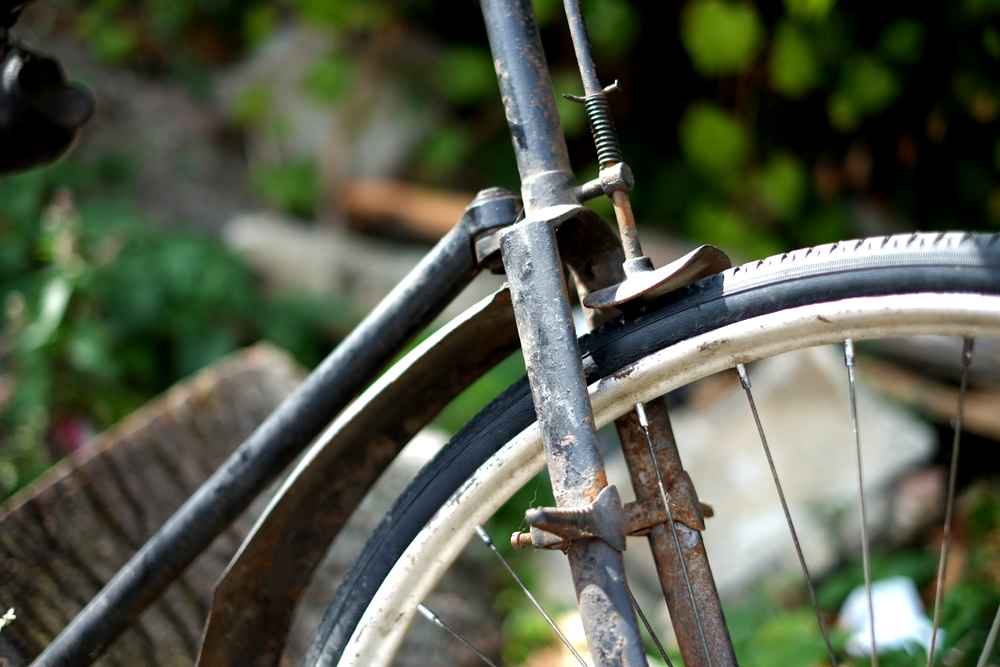 As is, of course, the front spoon brake. 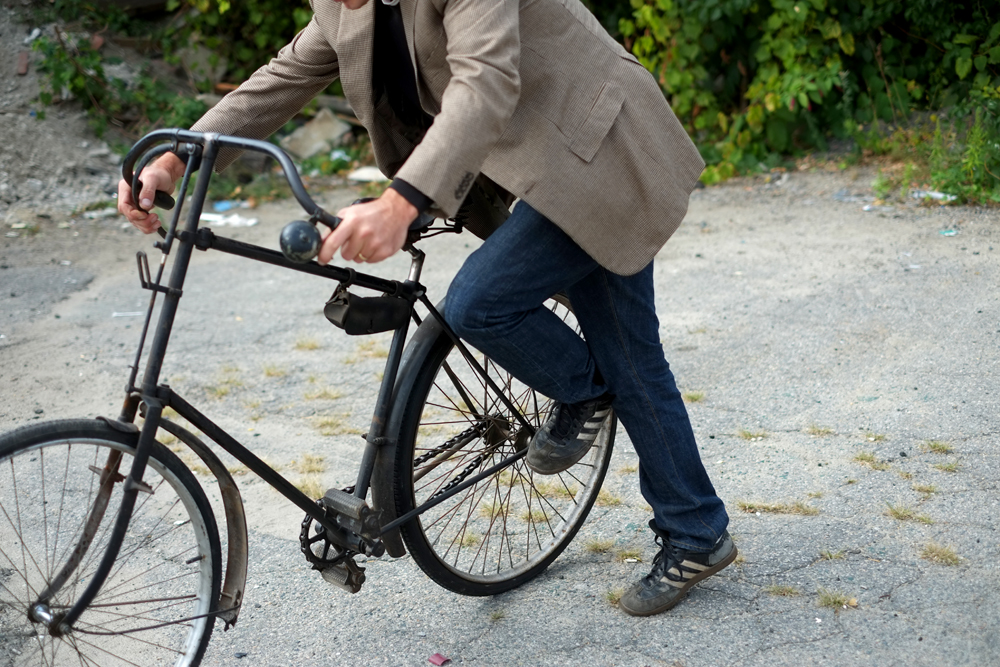 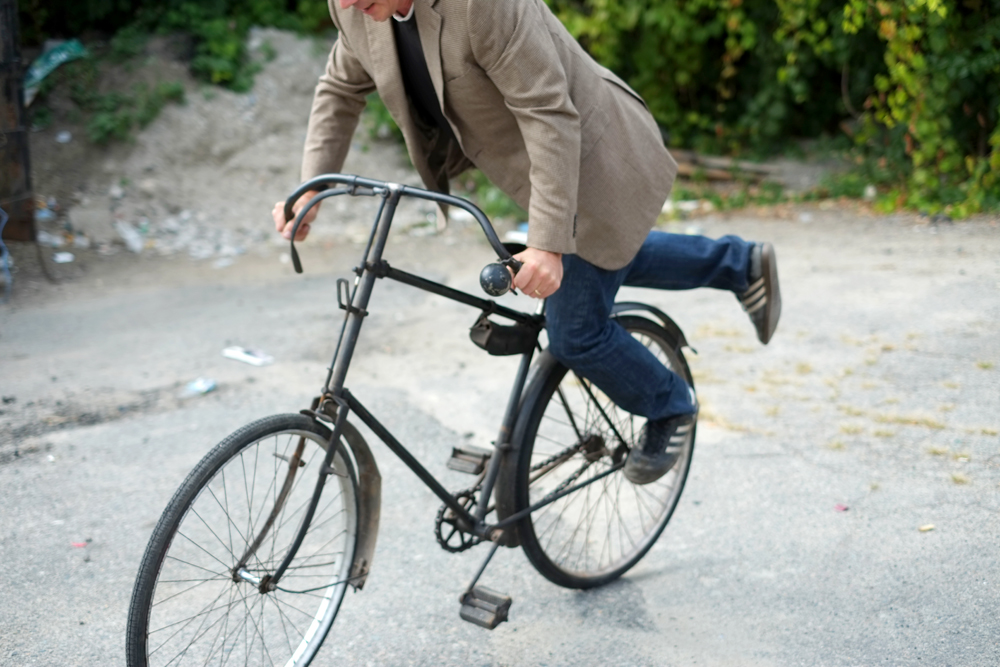 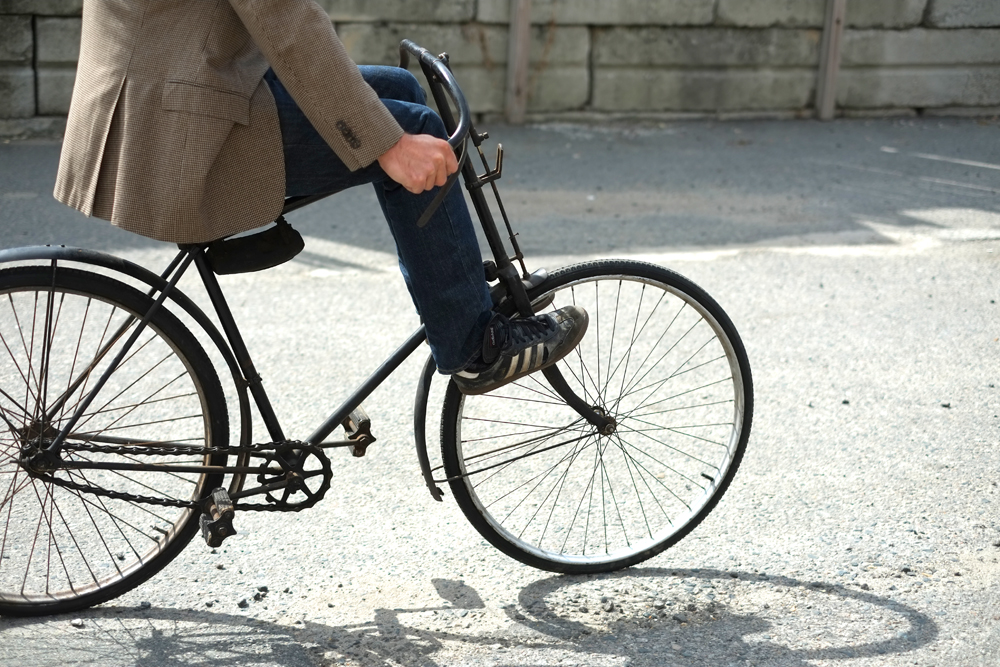 While foot rests on the fork blades facilitate the fixed geared "hipster coast." 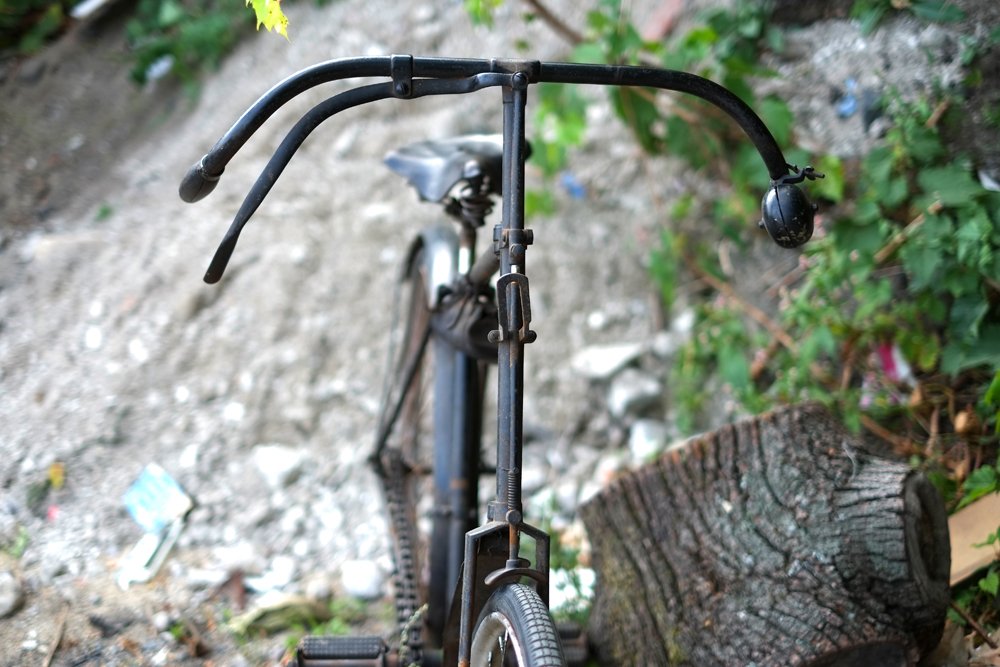 But, all of this pales in comparison to what is by far the coolest feature of the 1892 Rudge: the headtube! Or, rather, the steerer! Or really both, since they are one and the same. 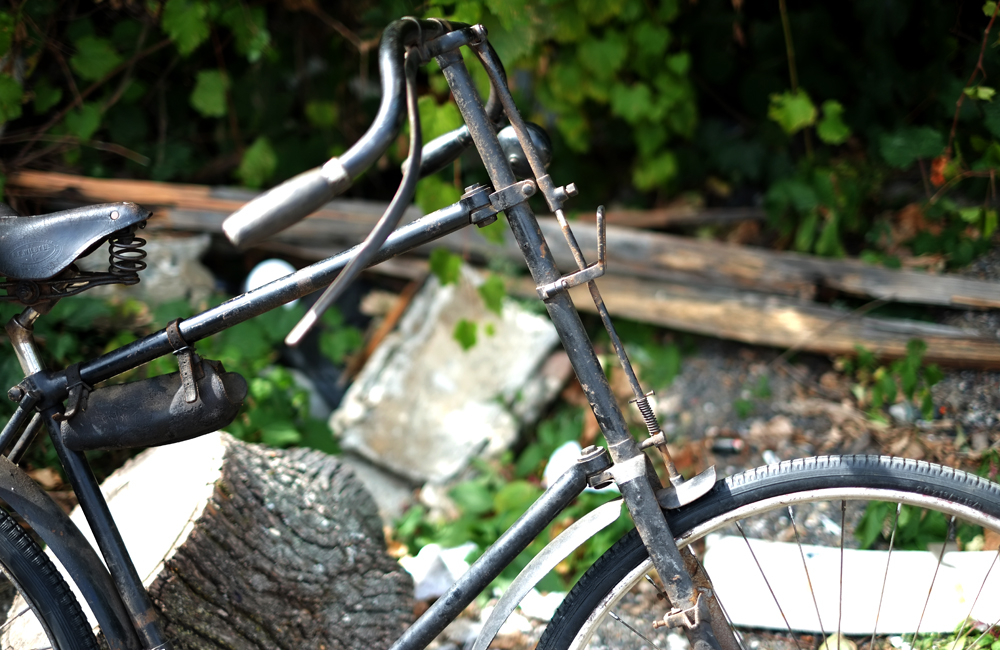 As you can see in the pictures, the stem, headtube and fork are all one unit, connected to the top and downtube with hinges, so that when the rider turns the handlebars the entire front end pivots. 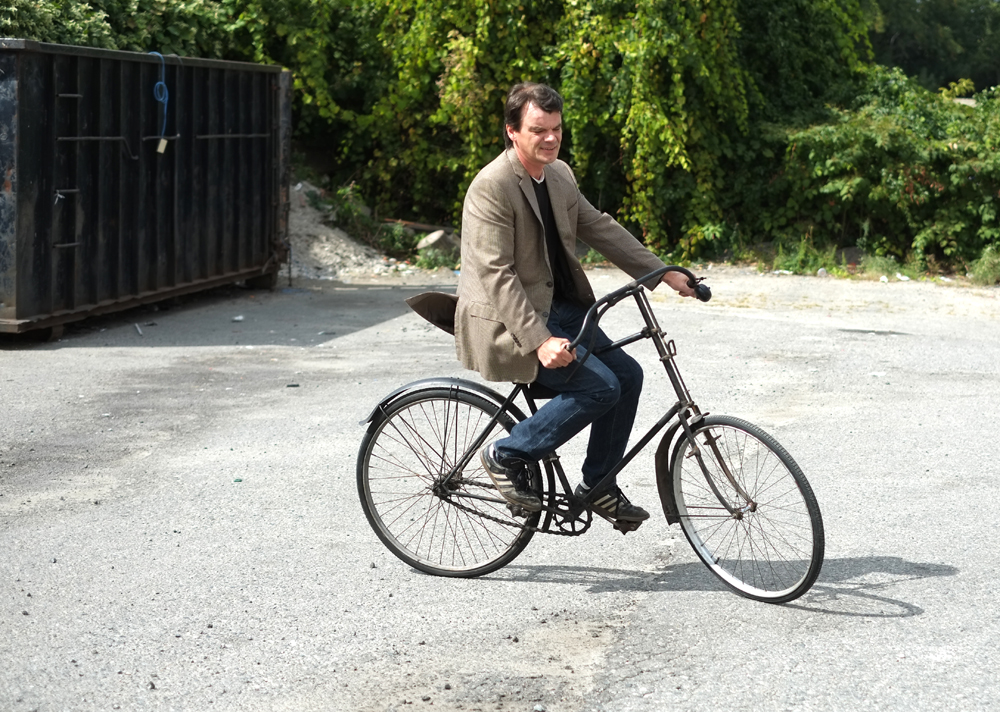 In motion, this looks something like this. To the observer, it does look as if there is something different about the front end, even if you can't put into words what that is until someone points out the funky construction. 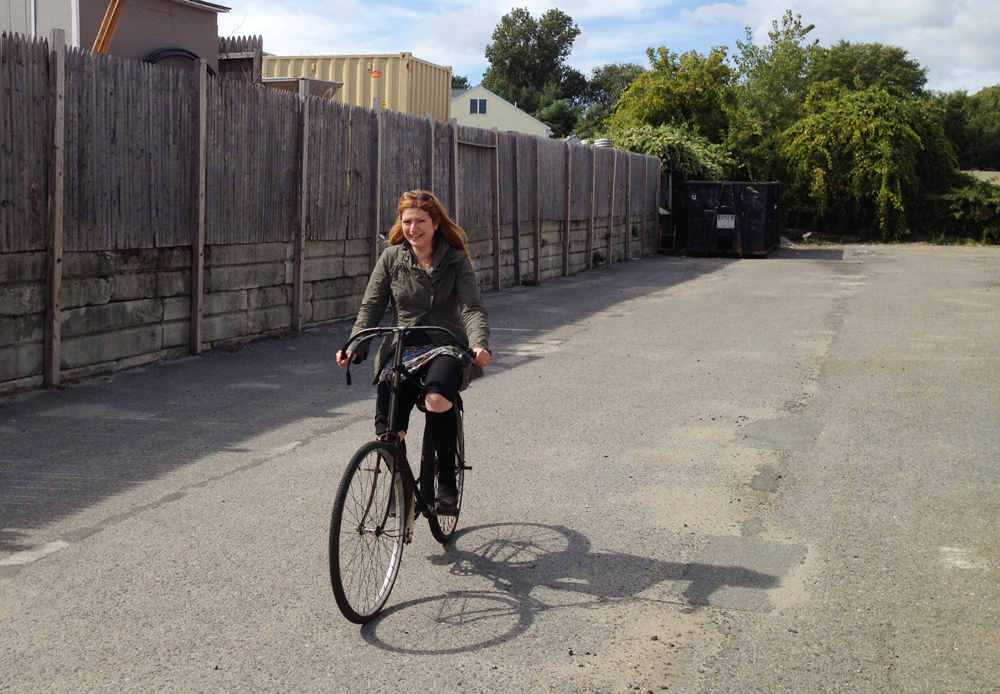 However, from the rider's perspective (yes, I was soon riding the bike myself!) the front end handling feels strangely normal - in an early roadsterish sort of way, which is to say, rather deliberate and delayed. It is only the visual aspect of things that takes getting used to - that is, seeing the headtube turn when the handlebars turn.

As far as sizing, I am still not sure what stature of rider this bicycle was meant to fit. Lowering the saddle nearly as far down as it would go allowed me to pedal comfortably. However, I could not clear even the lowest part of the top tube (which towered above saddle height, due to the slope), and had to lean the bike over considerably when standing over it. 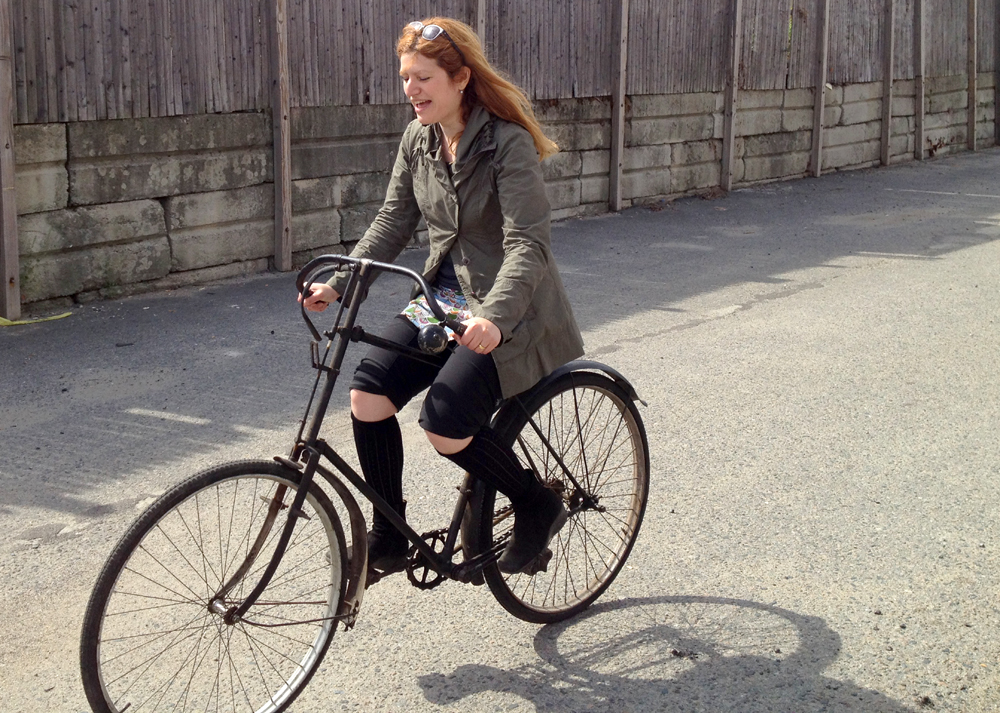 In motion, the (surprisingly reasonably geared) fixed drivetrain picked up momentum with a steady eagerness, so that soon I was circling the industrial parking lot at speed - which the spoon brake actually helped shave off when it was time to stop (my feet did the rest). All in all, riding the 1892 Rudge with its pivoting front end, odd fit, differently sized wheels and monster chain, did not feel all that different from riding an early vintage roadster. I would not choose it for a personal commuter bike, but that is mostly due to the awkward top tube. Did the Rudge Model D exist in a drop frame version? I have a feeling it did. And if so, I might reconsider my disposition toward antique bicycles.

If you are in the Boston area and interested in trying the 1892 Rudge Model D for yourself, get in touch with Nick through the Three Speed Hub. The bicycle is not for sale, but available for historically informative joy rides!
Labels: bike friends show and tell vintage test rides vintage