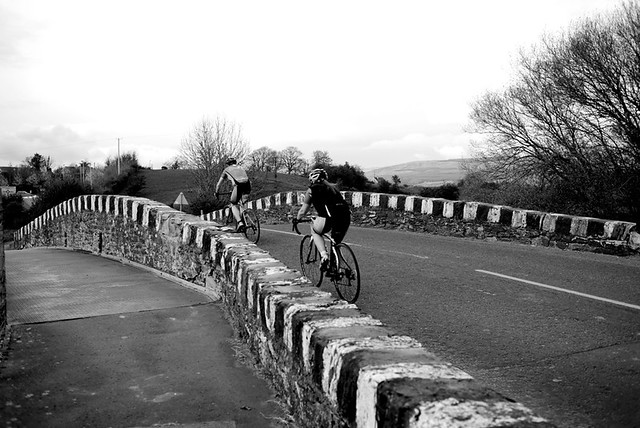 After a 7 year absence from the driver's seat, I found myself in one again as I practiced my rusty motoring skills on the narrow winding roads of Northern Ireland. I still have no plans to buy a car here. But I want to be able to operate one when called upon. Skills, after all, are useful things, and I never intended to let my ability to drive atrophy. But alas, time passed and atrophy it did - so that this time around it felt as if I were learning to drive from scratch.

Some of the novelty had to do with the left-handed traffic flow here. I did not expect for this to be problematic, as I have no trouble at all switching into left-hand mode when riding my bicycle. What I didn't anticipate was the difference in the visuo-spatial experience of operating a right-hand drive car. It seems that over the years I drove in the past, my brain must have grown accustomed to relying on certain markers on the road in relation to the contours of the car's front end in determining my road position.

Of course these markers had been viewed from the vantage point of the American driver's seat, located on the left side of the car. In cars in Ireland and the UK, the driver's seat is located on the right, which results in a very different vantage point. So now that I drove from the opposite side of the car, my brain's reliance on those old cues was dangerously inaccurate - making me feel as if I were too far out to the right and about to smash into oncoming traffic, whereas in reality I'd be too far to the left, about to drive into a ditch or smash into a stone wall. It took me weeks of regular, supervised driving - during which I  kept my road position as instructed, ignoring every fibre of my being screaming "you're too close to the right! swerve left or else you'll hit that truck coming toward you!!" - before my brain re-callibrated to the correct vantage point. But gradually I stopped flinching when passing cars on the opposite side of the road, and the proper road position began to feel more and more natural until at last, I was pronounced safe to drive on my own. "Here," said my beloved/ instructor, handing me his car keys with alarming nonchalance, "I won't need it today, so why don't you take it and practice."

A car to myself!... oh what exciting places would I drive to? I decided to visit the supermarket and stock up on all the bulkiest items that were a pain to transport by bike. The route into town, while only 8 miles in distance, had it all: twisty narrow roads, a dangerous bridge, hairpin bends, blind crests, a crazily-cambered roundabout, and exquisitely subtle "Yield" markings painted in unexpected places. It was also, on that particular Saturday morning, positively teeming with cyclists - this despite the vigorous rain that grew gleefully torrential as I pulled out of my lane and onto the main road.

As I drove, surprisingly calm, passing one cyclist after another while watching for oncoming traffic through the flow of water and the manic sweep of the windshield wipers, I thought about the notion of giving space. Linguistically, this phrase fosters a sense that we have this space, our space (in this case the entire travel lane?), and then we give it. If we're feeling good, we give it generously, magnanimously. If we're out of sorts or in a hurry, we give it irritably, begrudgingly. Either way, it portrays the driver in the role of some grand benefactor. Only the thing is, I thought, navigating the bendy, slippery road that demanded my full attention, we do not "give" it at all. It's more accurate to think of ourselves as taking space - whilst continuously adjusting our position, speed and trajectory based on road conditions and other road users. When I pass a cyclist, I am not giving them space. I am partaking of a common space in a way that must not interfere with their ability to do the same.

It's not that this realisation was profound. If anything it had an ordinary, organic feel to it. But it made me feel comfortable in my role as vehicle operator, while also renewing my appreciation for the skill of driving. To manipulate ourselves through space in a vehicle, we must have excellent control of that vehicle. And I'm not sure at all that most drivers do - myself in my younger years included. And this feeling of the lane we happen to be in being "our" lane, like a dedicated track on which we can switch into mental auto-pilot mode, is one symptom of that. There is no space on the road that is ours, ever. We must at all times carve it out, at once confidently and cautiously, and, most importantly, while being fully switched on.

It's been a couple of months now since I've been able to drive solo again. And I believe that, this time around, I am actually a competent driver - a realisation that makes me prouder than I'd anticipated. But moreover, driving feels different to me now than it did 7 years ago. In large part it's because my past hatred of driving has been replaced with curiosity and enthusiasm - ironically, as a result of cycling. I find myself fascinated by the car's handling, by why it does what it does under different circumstances, speeds and road conditions. And all this makes me a lot more involved in the process of driving, a more deliberate, aware and engaged vehicle operator. I don't give space. But I feel like I understand how to take it, safely - whether on a bike or inside a car.
Labels: cars Ireland not cycling