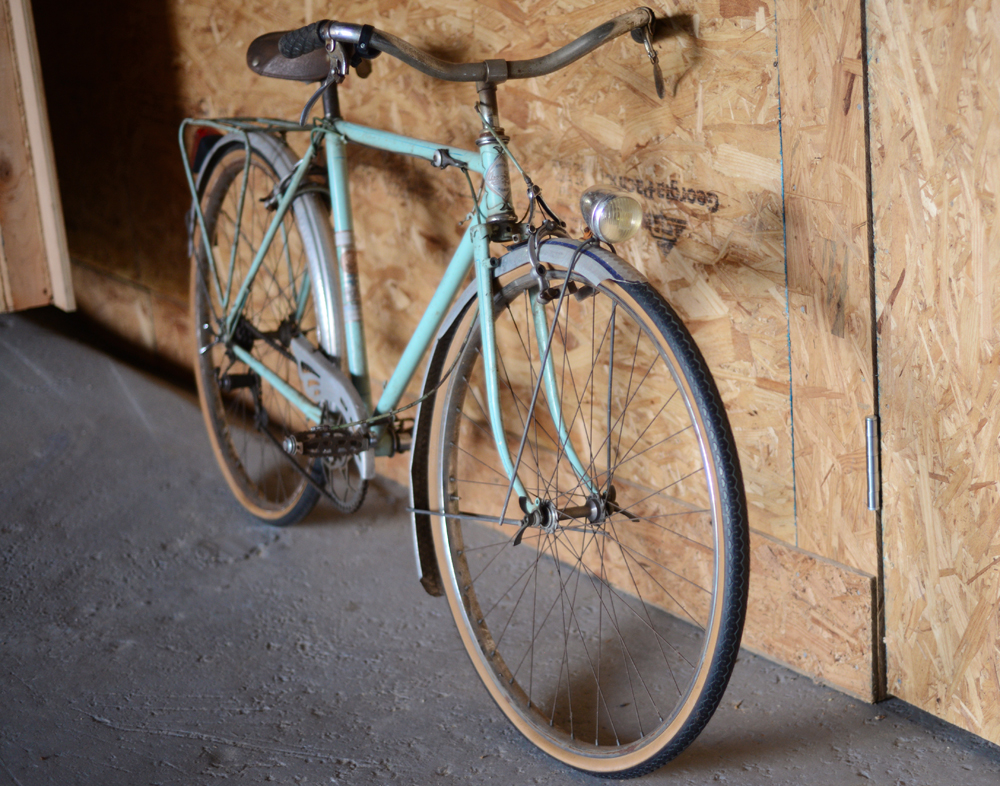 For one accustomed to currently-made, constructeur-inspired machines, seeing one of the originals can be a surreal experience. All the imitated elements - from the intricate lugwork, to the fat 650B tires, to the artful chaincase and elegant rack, even to the colour of the paint - are there. And yet the bicycle looks and feels different from the modern remakes. In some ways it feels like a book illustration come to life, more than a real bike. 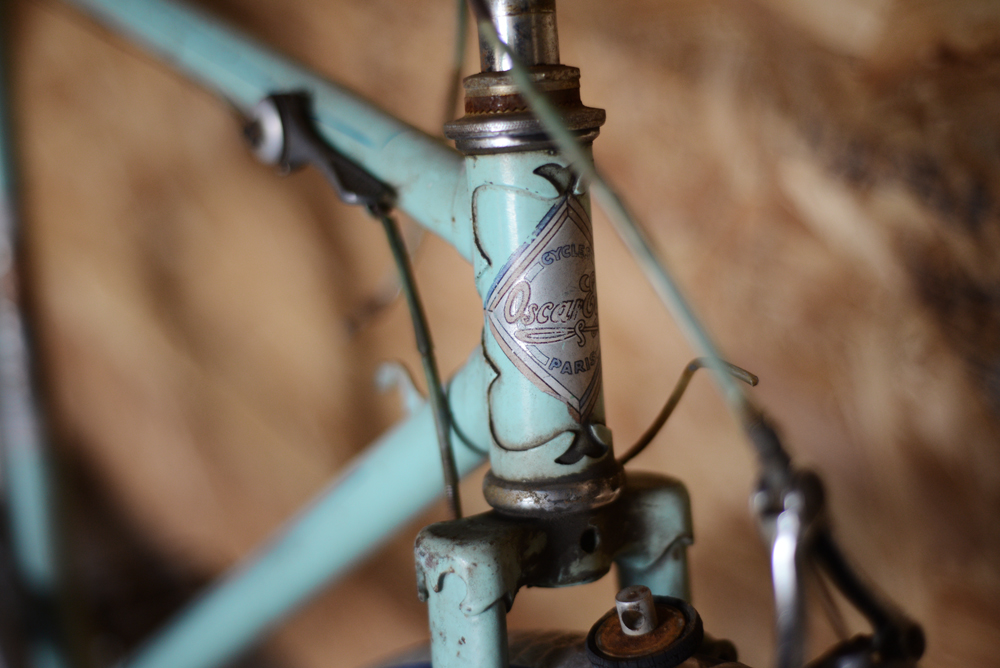 In the darkened hallway stands a box, torn open at the top. When I see the words "Oscar Egg" on a powder-blue tube, I feel such lightheaded excitement that I need to walk away.

I am not certain why the name of this particular builder engages my imagination. A Swiss bicycle racer who later settled in Paris to sell and manufacture bike parts, he is perhaps best known for his lugs, which were used by a variety of European builders. Complete Oscar Egg bicycles are less common, and there seems to be some debate as to whether he actually built them himself. Aside from this, little is known of him or his work. The man himself appears in photos as a broadly smiling, amicable fellow, with a round face and perky ears. The name Oscar Egg suits him. The name somehow also suits itself - the O in Oscar resembling an egg, and the font in which it is inscribed reminding me of an old children's book cover. 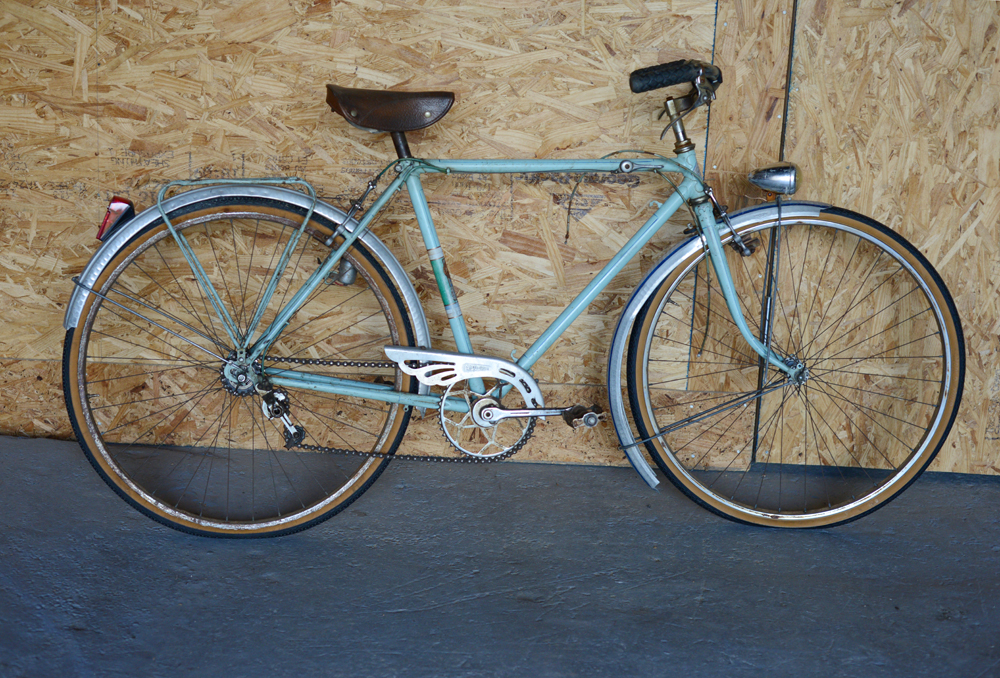 I step outside to photograph some bikes of Nick's - the collector whose warehouse I'm in. When I return the Oscar Egg is unboxed and propped against the wall - unassembled, the parts just resting on top of one another. The machine is teeny-tiny, a 50cm frame perhaps, and a perfect, powdery shade of robin's egg blue. And it's a city bike, with upright handlebars and relaxed angles. 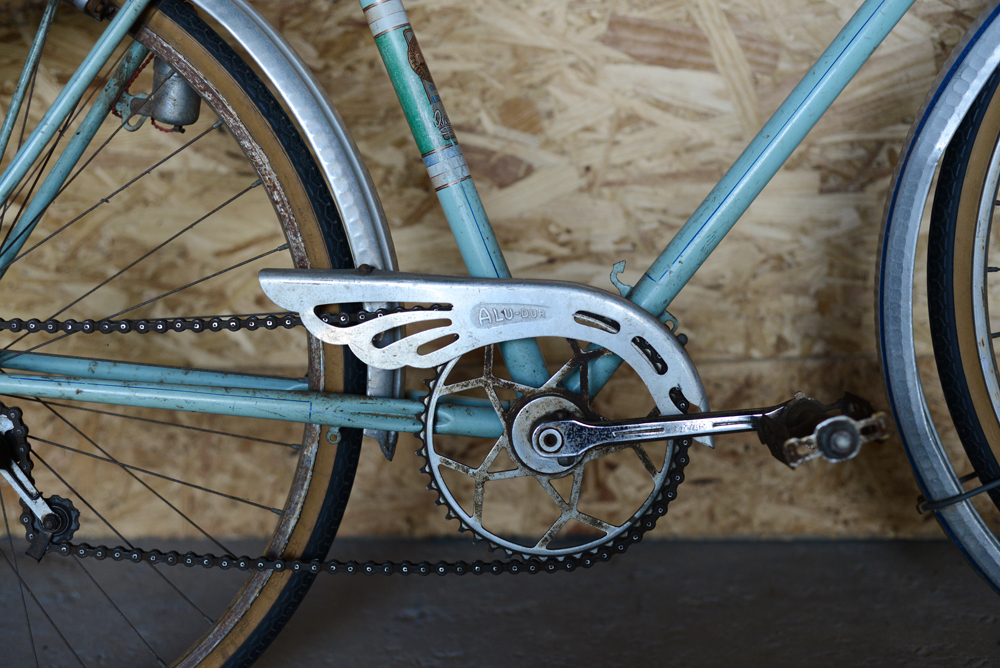 The unassembled bike cannot be easily moved, and the patchily lit hallway makes for a film-noiresque viewing. 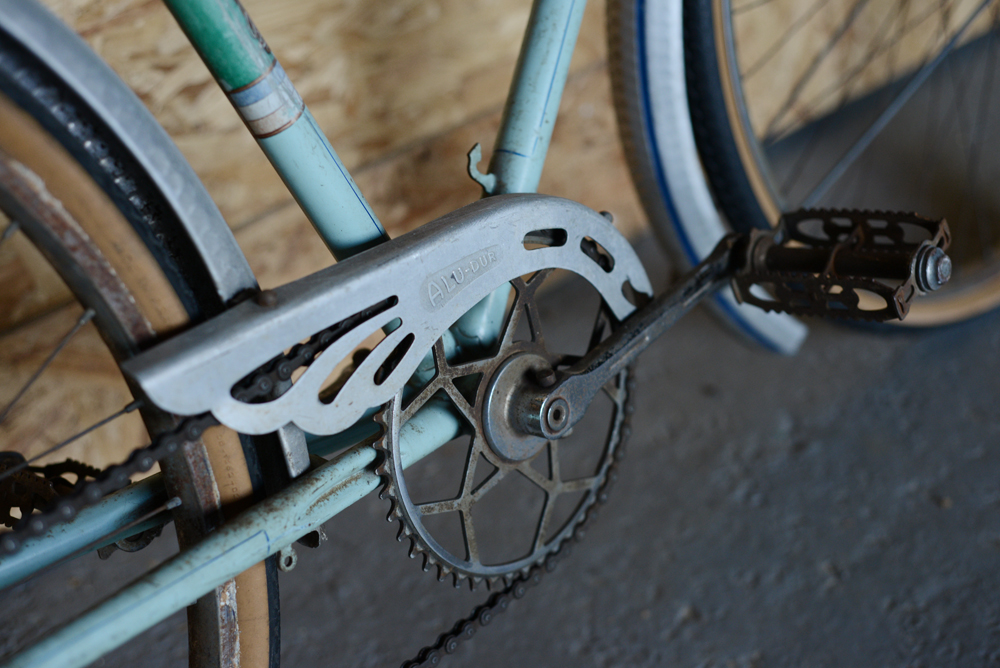 The dramatic flick of the Alu-Dur chainguard. 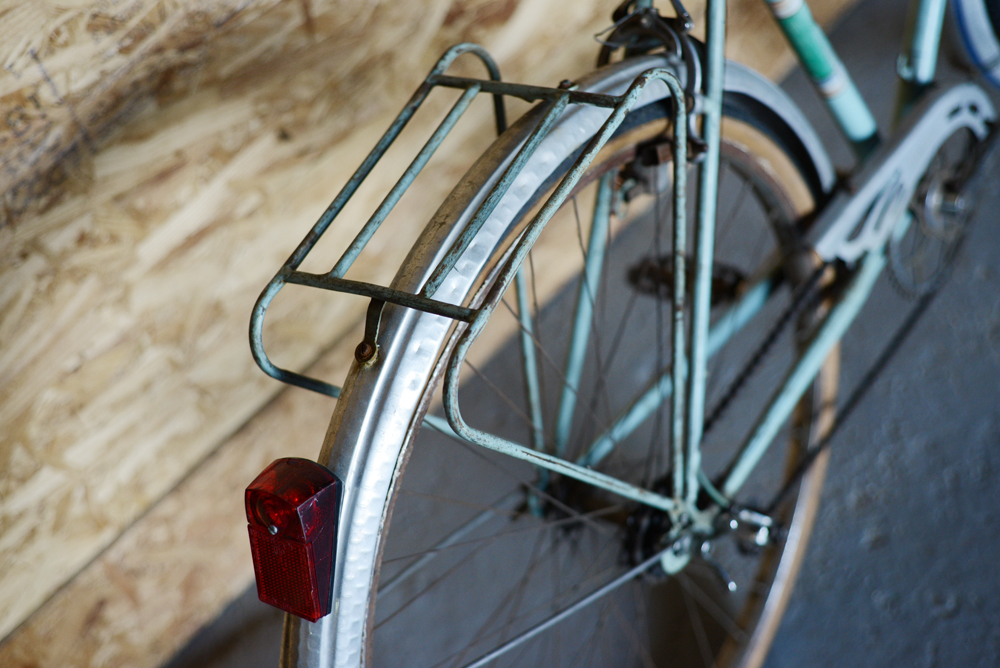 The rounded forms of the rear rack. 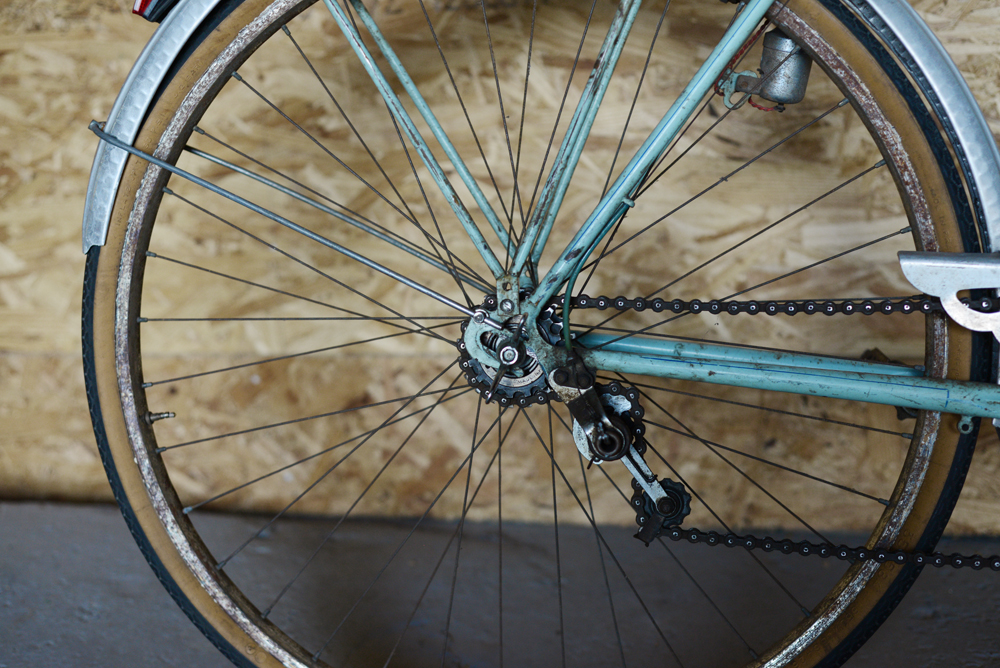 The plump 650B wheels, the indentations on the fenders, the jewel-like lights, the wingnuts, the delicate-looking pulleys… 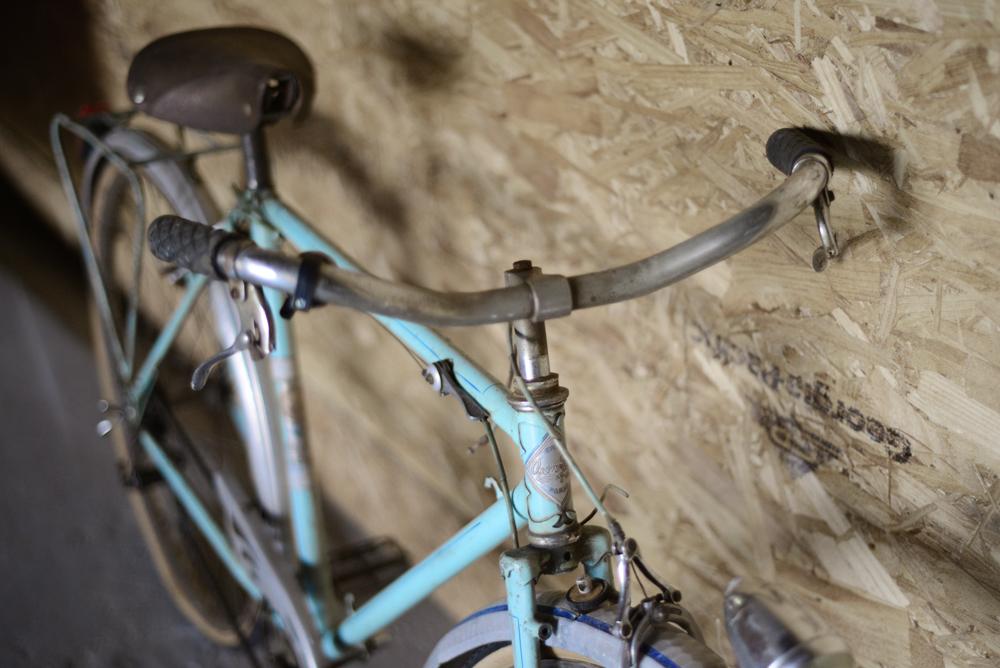 My eyes dart from one detail to another, and so perfectly like itself each part is that it hardly seems real. The bike is from the 1950s, and not a particularly high-end model, judging by the simpler style of lugwork. Not that these things are particularly well documented, when it comes to Oscar Egg. 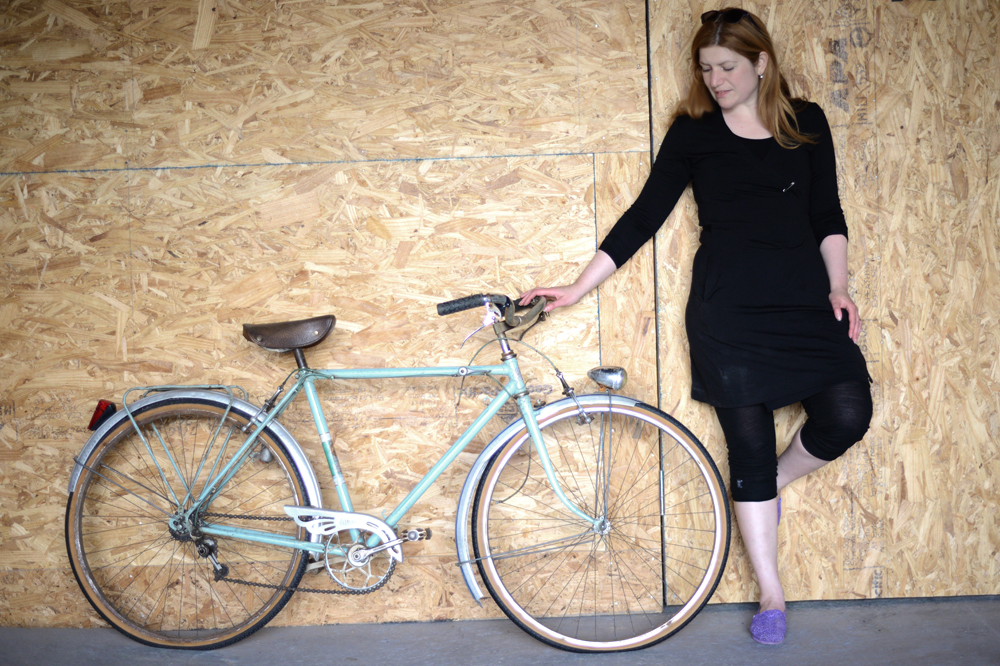 The details of this bicycle's construction may never be known. I lament this, while in my head plays a black and white silent film in which Humpty Dumpy, clad in an old work apron, sits bent over a pile of lugwork with a file and polishing cloth, his elbows moving jerkily as music builds to a crescendo.
Labels: show and tell vintage vintage