"Saving" Your Gears: a False Economy? 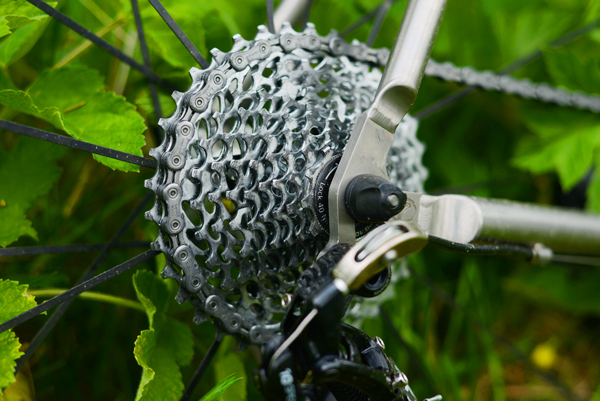 Just as one might ration out provisions in anticipation of hard times, so will some cyclists engage in an act I will refer to as "saving gears." Allow me to explain. Say you're doing a long, unpleasant climb. Almost straight away the gradient is pretty bad, in a "hits you over the head with a shovel" sort of way. And you know there's more of that to come. So you start downshifting, clicking through the gears with manic desperation in order to cope with the steepness of the climb. But in doing so, you take care to resist the temptation to use your absolute lowest gear. Why? Well, because as the climb progresses, you don't want to run out of gears at a moment you need them most! So, mentally you set that bail-out gear aside. Hidden under your mind's floorboards, it is your emergency water supply in a drought; your last crust of bread in a famine.

And then, only in your darkest hour, when you go around that bend where you expect the climb to level out only to find that it steepens obscenely, just as you're about to despair and pass out from the effort, you remember that one last gear and you switch to it, and the mere relief its presence brings allows you to soar toward salvation. It is this that saving gears is all about.

Some might call it a false economy. Why not spin in a comfortable gear all the way up, rather than torture and overexert yourself needlessly? And no doubt that is wise. Yet our nature, some primeval instinct within us, compels us to keep a reserve for hard times. Just in case.

I contemplated this today, as I saved my lowest gear for the hard bit at the end of a long and tedious hill. Though I hadn't done this climb in some time, I remembered that stretch well. I dreaded it physically and steeled myself against it mentally. And, fastidiously keeping away from my biggest cog, I spun in a gear that kept me all right, but not as comfortable as I could have been, waiting for that moment when the climb would try to surprise me with its last flick of nastiness and I, in turn, would triumph over it with a flick of shifter.

In this manner, I pedaled, and I huffed and puffed, and I anticipated. I watched the clouds above and the fields below, the birds soaring and the sheep grazing. I pedaled and I anticipated until something happened that I hadn't counted on…

I began to descend.

That last hard bit must not have been as bad as I remembered, since I never noticed when it came and went. And now my bail-out gear, having gone unused, sat there sulkily, gathering dust, as I flew down the other side of the hill, then made my way home. The joke was on me. Or was there a joke in this at all? My legs did not seem to find it funny!
Labels: gearing hills roadcycling