On Pedaling to the Doctor: a Rural Cyclist's Predicament 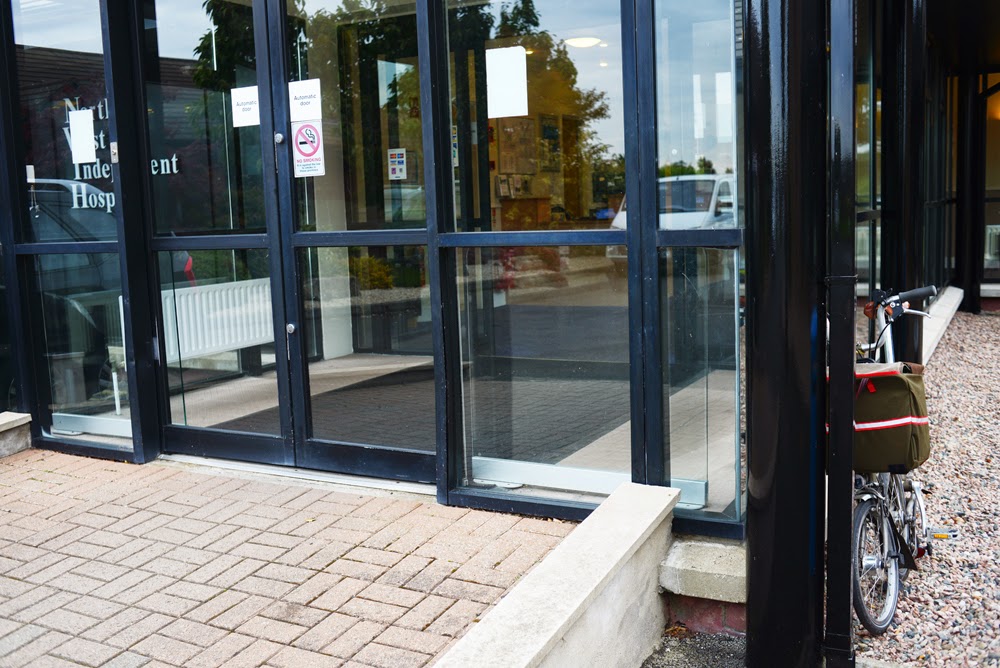 A couple of years ago I was chatting to a cyclist who lived car free in an out of the way suburb, and I asked what he found challenging about getting around by bike. Interestingly, it was not his daily 20 mile commute to work. This he happily combined with training, cycling in lycra and changing at his office building's gym and shower facilities. Neither was it his 12 mile grocery/ hardware store run. To accomplish that, he hitched a trailer to his roadbike every Saturday morning and stocked up for the week. What he did find tricky, he said, was visiting the doctor. "How do you mean?" I asked. "Oh you know," he chuckled, now slightly embarrassed, "I hate to arrive for a check-up with that not so fresh feeling..."


At the time I had not given his words much consideration. But they came back to me on the day of my first doctor's appointment since having moved to a rural area. Faced with an 11 mile ride to the hospital along exposed country roads in windy conditions, I found myself uneasy about the state I'd be in upon arrival.

While not everyone will admit this openly, the truth is that we tend to "primp" before a doctor's appointment. In fact, a casual survey of my friends revealed that most have elaborate pre-doctor visit rituals that can rival any romantic date prep. At the very least, we want to be clean - ideally, freshly showered and wearing recently laundered clothing. We make sure to put on our "good" underwear and socks, not the stretched-out, hole-ridden rags we might normally wear when we think no one will see. For women, it is not uncommon to shave or wax before a doctor's appointment, at times more thoroughly than for a holiday in Ipanema. To make liberal use of scented lotions is considered by some de rigueur.

Don't get me wrong, it's not that we want to appeal to our doctors. It's more that we don't want to disgust them. At no other time does our personal hygiene seem under greater scrutiny than when our bodies are prodded and examined under glaring lights by a member of the medical profession (or more likely, by entire groups of them, with crowds of eager medical students gathered around as the doctor cheerfully points to some private part of our anatomy and we lie there, rendered docile and mute by the shock of the intrusion). And sure, they've probably seen it all. But somehow we still feel that our bodies have the power to revolt them, unless scrubbed clean and presentably packaged.

As the wind howled outside at 25mph, I considered my transportation options. I could make it easier on myself and ride my roadbike. But then I'd have to wear the shoes and the padded shorts. I'd arrive looking and smelling like a sweaty cyclist, presenting with CCS (Crumpled Crotch Syndrome). The alternative was to ride an upright bike in my everyday clothes. But that would take longer and feel tedious, and I'd probably still arrive sweaty. In a moment of desperation, I considered the bus. But there is no direct route to the hospital from my house, and the thought of spending half a day on bus transfers filled me with horror - which proved a rather effective means of resolving my indecision. For heaven's sake, it's only 11 miles. I put on clean clothes, grabbed a packet of tea tree oil wipes, got on my folding bike and took my time pedaling into the wind. Upon arrival, I darted for the bathroom and gave myself a zealous wipe-down before plopping into a chair in the waiting room.

If I displayed any signs of uncleanliness, the doctor did not let on. But he did scrutinise my face with mild concern. "And how long have you been troubled by that patchy redness?" For a moment, I panicked, imagining myself stricken with some terrible skin disease. Then I remembered: I'd been riding my bicycle.
Labels: rural cycling transport