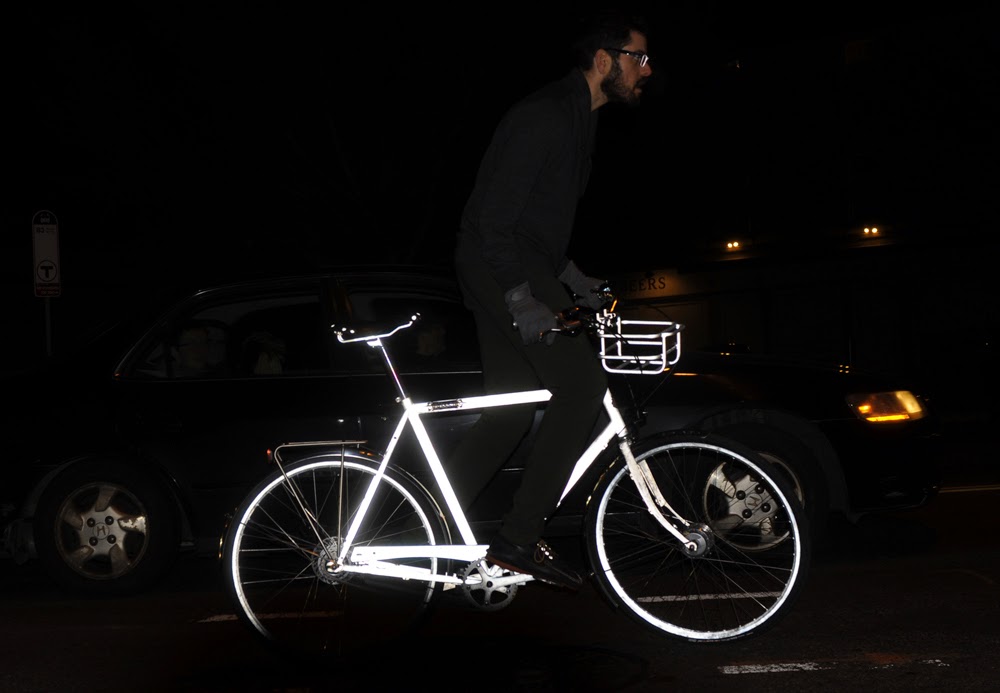 Some time ago I wrote about a "retro-reflective" powdercoat developed by manufacturer Halo Coatings and mentioned its potential application to bicycle frames. Two years later, framesets using this technology are finally starting to become commercially available. Mission Bicycles has recently announced their $500 Lumen frameset available for pre-order, and various publications have covered the news. As far as I can tell, few have had direct experience with bikes made with this technology, so I thought this might be a good time to share my impressions. 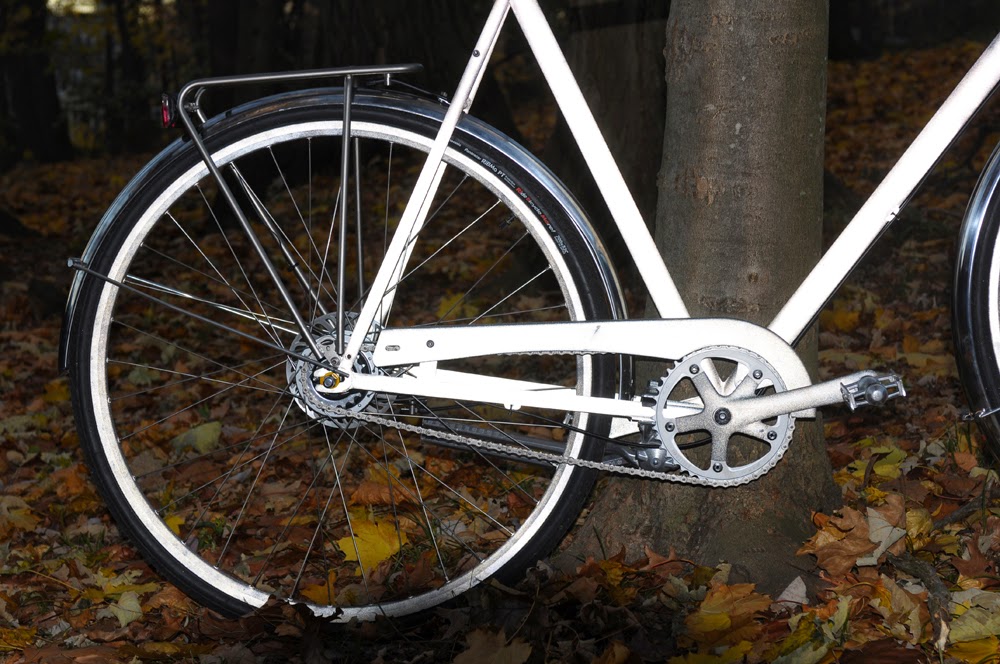 As it happens, I know the guys behind Halo Coatings through the Boston cycling scene. And I've had the opportunity to examine a pre-production bike made with their technology up close and personal. 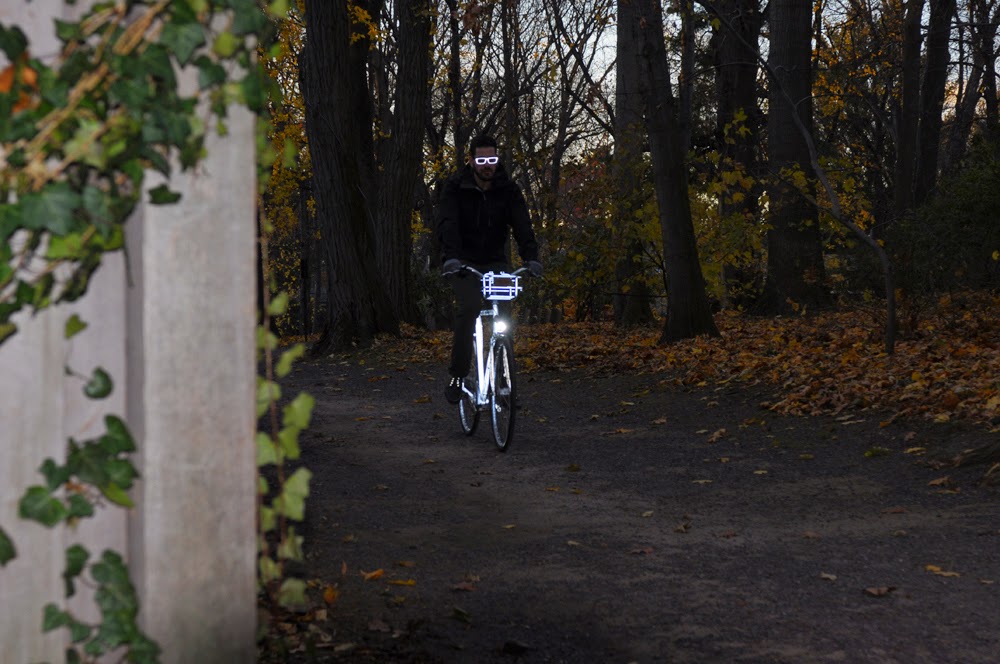 The bike shown belongs to Joshua Zisson of Bike Safe Boston. Initially a Halo customer, he felt so strongly about the product's possibilities he ended up joining the company. Last year I followed Josh around the city as he rode his reflective bike. As you might imagine, keeping track of him in the dark wasn't terribly difficult. 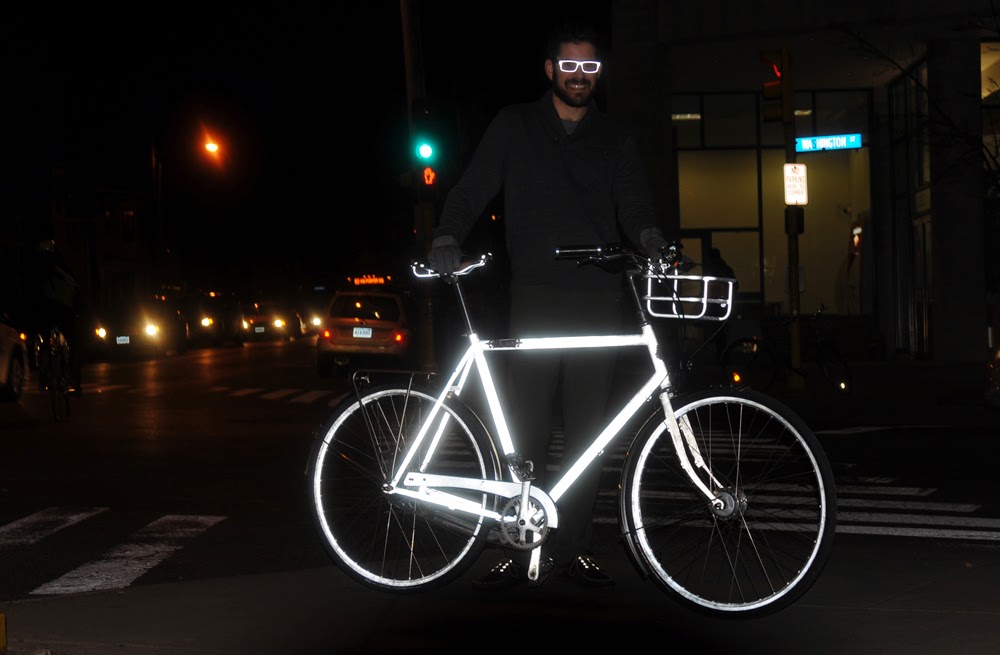 When it comes to reflective properties, the Halo-coated bike does exactly what I was led to expect. In the glare of a camera flash or vehicle headlights, the finish reflects a bright white, setting the entire machine aglow. 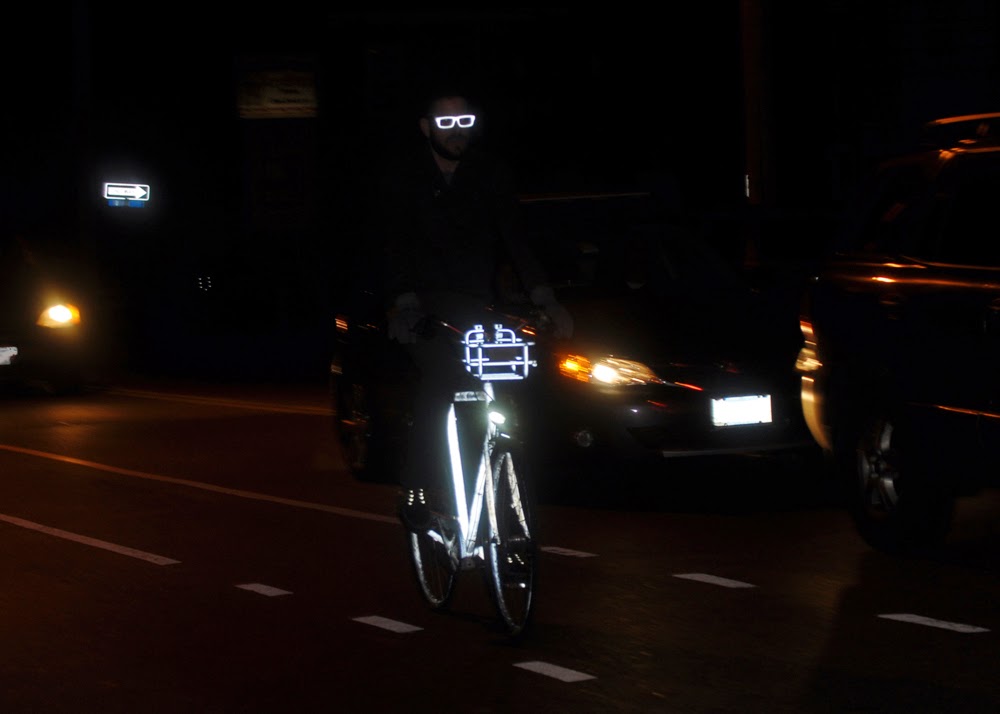 In the dark, it looks like a glowing, riderless bike, which is a pretty funny sight. In my previous post and elsewhere, some have expressed concern that this degree of visibility could be too much, disturbing and distracting other road users. Observing the bike as it operated in Boston night traffic, I did not get that impression. The reflective glow is not piercingly-bright in a way that hurt my eyes or made me fixate on it. If anything, I found that on busy and well-lit streets, the bike faded in prominence. You can see this in Mission's own promotional video as well: Notice that the more street lights there are, the less the bikes stand out. On the other hand, when rolling through a dark side street or through the woods, the bike is super-visible. A reflective frameset like this might be useful on my rural commutes in Ireland. 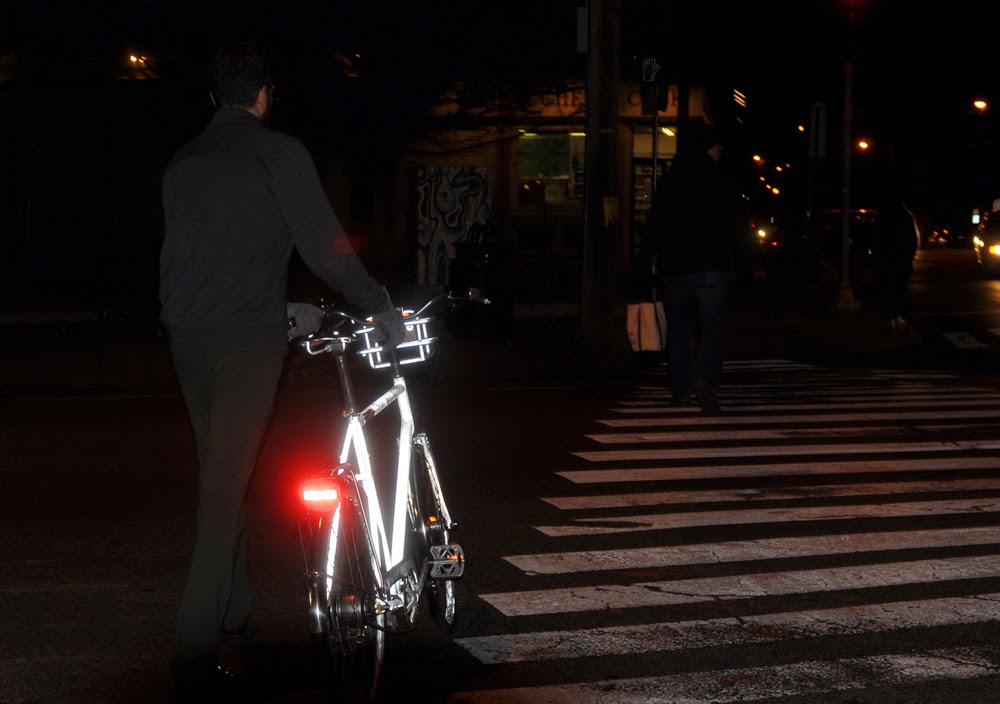 Others have wondered whether a reflective frameset would be sufficiently visible from the front and rear. According to my observations, yes, and the pictures here demonstrate this. Even if the bike were positioned as to align perfectly straight (which in reality seldom happens), the swathe of headtube and fork makes for a large reflective area head-on, and the seat stays reflect in the rear. Of course, with a bike like this you still need a headlight and tail light, as the frame's reflective properties will only activate under strong direct light. The reflective paint is a supplementary visibility feature, not intended to replace lighting. 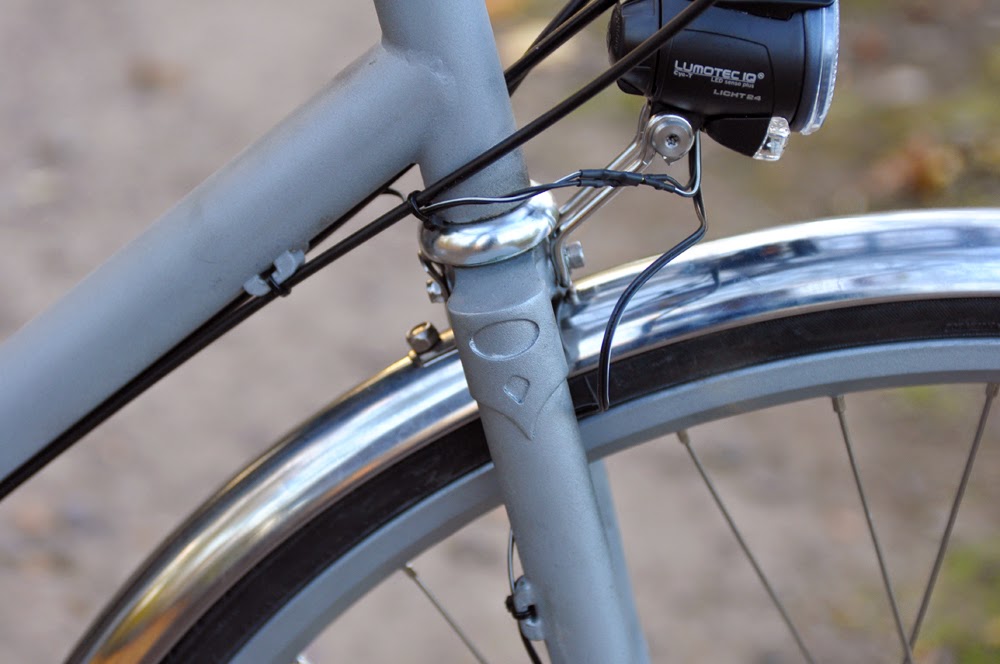 Aside from its luminous properties, one notable aspect of the Halo coating is the distinct aesthetic. On his pre-production frame Josh opted for the matte silver finish, which, in its non-reflective state has a flat, industrial look to it. 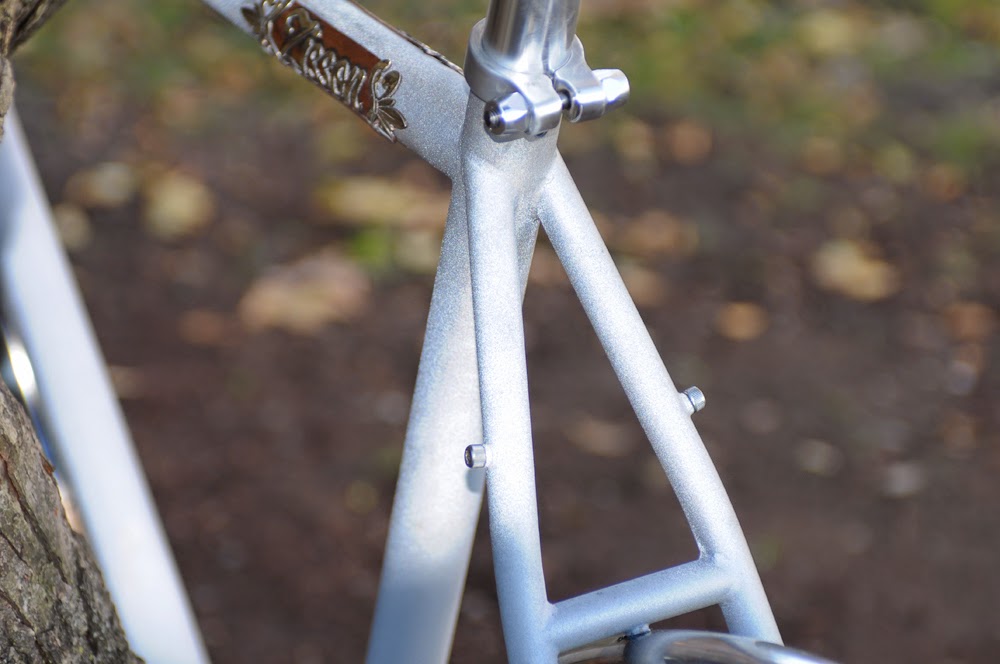 Under certain light conditions, there is also a velvety quality that comes through, with some subtle tonal variation. It is a matte finish with a shimmery depth to it, rather than a metallic finish, if that makes sense. 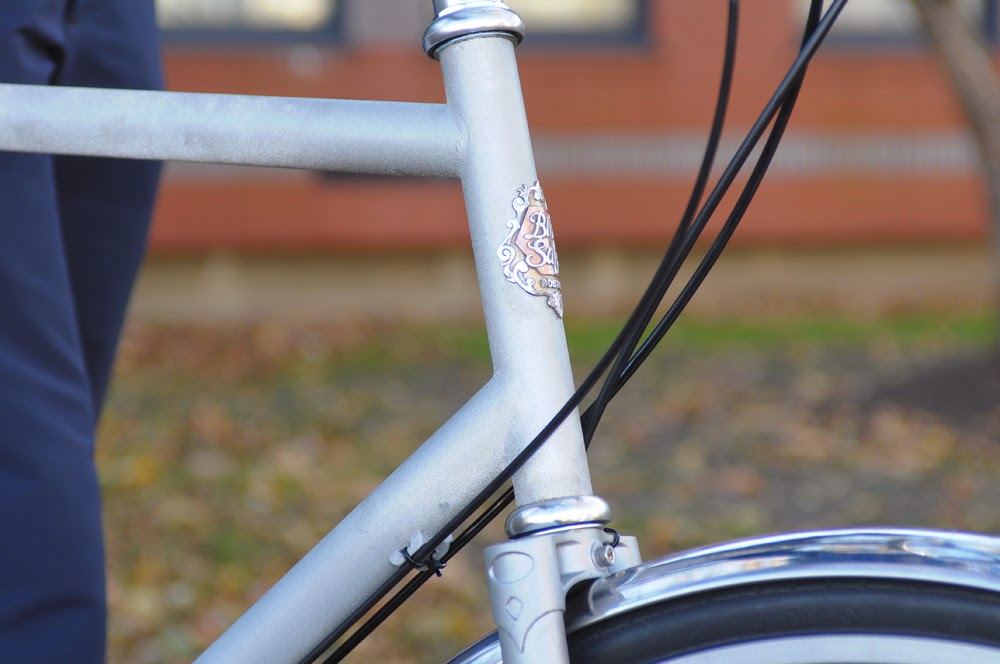 The look is unusual for sure, and may not be to everyone's taste. If you like a bike with a raw, unpolished vibe, you will be delighted. But sleek and sparkly it is not. The coating on Mission's Lumen frame is a gloss charcoal gray, which will have a different look to it while incorporating some of the same elements. I have also seen swatches of other colours, and those could become available in future. And colour aside, the finish is also said to be durable: According to Halo, it is rated to withstand over 4,300 hours in the industry "salt spray" test (ASTM B117), with zero loss in reflectivity. 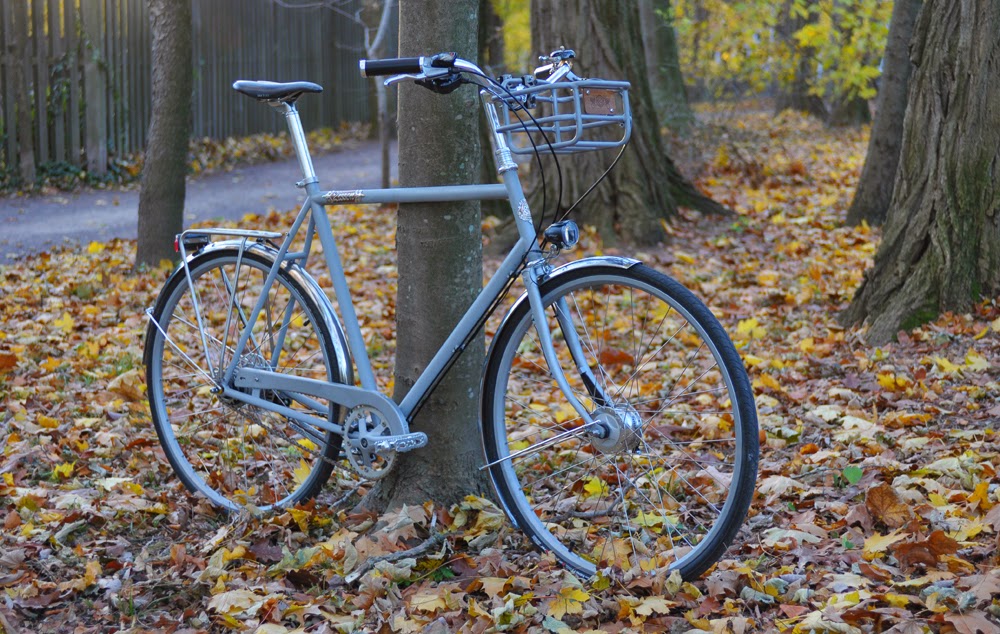 Currently Halo's facility is set up to handle high volume runs, which means they can only accommodate manufacturers, not individual customers or framebuilders looking to coat one frame at a time. In other words, to get your hands on a reflective bike with this technology, you have to wait until a manufacturer decides to offer it. The San Francisco-based Mission are the first to give it a try, with delivery of their Lumen framesets scheduled for December 2014. The guys at Halo are also talking to several other companies that produce city bikes in a variety of styles, including step-throughs and mixtes, so that could be on offer soon. Considering what I've seen of the pre-production bike, I think this has potential - though perhaps even more for riding in the country than in the city. And I know more than a handful of randonneurs who wrap their entire bicycle frames in reflective tape and might appreciate this technology! I continue to follow Halo's progress with interest and wish Ryan and Josh best of luck.
Labels: lights night time cycling product reviews visibility