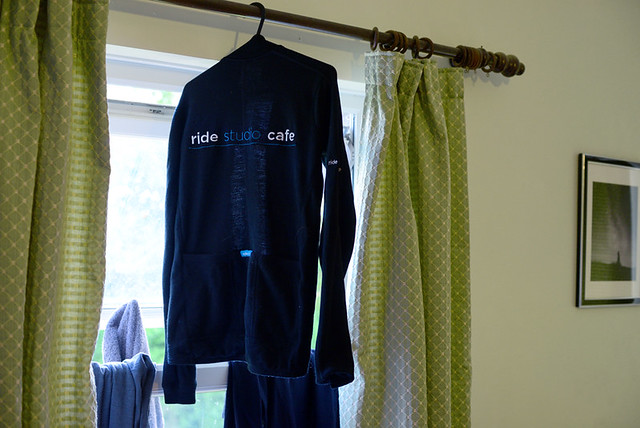 One of the much-touted attractions of wool clothing - and the basis on which it is recommended to cyclists - is its supposed odor resistant properties. In fact, it is not uncommon for proponents of the stuff to brag about how infrequently they wash their clothing (once a month! once a year! never!!!) As a wool enthusiast myself I am often asked about my take on this claim. Can wool clothing really be worn endlessly without washing? or - as one friend recently put it - "are woolsters just grungy?..."

Well, speaking from personal experience I would put it this way: Wool retains odors to a lesser extent than cotton, and to a much lesser extent than synthetics. This is not to say that it does not pick up odors at all; only that it picks them up at a slower rate, and perhaps emanates them more subtly. Still, eventually there will come a time when you will have to clean your wool garment. But cleaning need not mean washing. And one thing I've discovered over the years, is that "dry cleaning" wool with fresh air can be amazingly effective.

The practice of airing out clothing is of course nothing new. Compulsive laundering after brief periods of wear is a relatively recent trend, and it was once common practice to hang clothes in the window or even on the backs of chairs overnight to keep them fresher, longer.

But with wool, this method is disproportionally effective. Just as wool is reluctant to retain odors, it's also eager to shed them if given a chance. The back yard clothesline does the trick best, especially on a breezy day. After I hang my wool clothes on the clothesline for half a day, they don't just smell fresh-er; they smell no less clean than had I actually washed them, then hung them out in the garden. They smell like the sun and the wind, that "fresh laundry" scent that detergent manufacturers try so desperately to bottle, but that can't quite compete with the real thing. And if you don't have a yard with a clothesline? Opening the window and hanging the garment off the curtain rod (or a hook) can work too.

But why bother with this at all, you might ask, when you can just toss the clothes in the washing machine? Well, environmental and financial issues aside, there is incentive to wash wool as infrequently as possible. Wool tends to be more delicate than synthetics and cottons, as well as more prone to losing its shape. And while this is not necessarily true for all wool clothing (anything made of the "indie" fabric from Ibex I've found to be especially resilient), it has been true for enough of it, so that I avoid washing unless I have to.

While it may seem suspiciously simple, I have found that airing out wool works wonders to remove not only body odors, but also ambient smells picked from the environment, including strong food and cigarette smoke odors. Of course, airing out won't get rid of stains. So with a stain, I'll treat then handwash just the area around it - then air-dry.

The only time I really wash my wool clothing fully and properly, is after I wear it doing something active on a hot day. When fabric becomes salt-encrusted from sweat, there is really no way to deal with it but wash the entire thing. Otherwise, the airing out method keeps my wool's contact with the washing machine at a minimum. Am I grungy or is wool just that cool? Try it out and decide for yourself!
Labels: clothing wool