Room at the Inn? Accommodation Strategies for Bicycle Touring 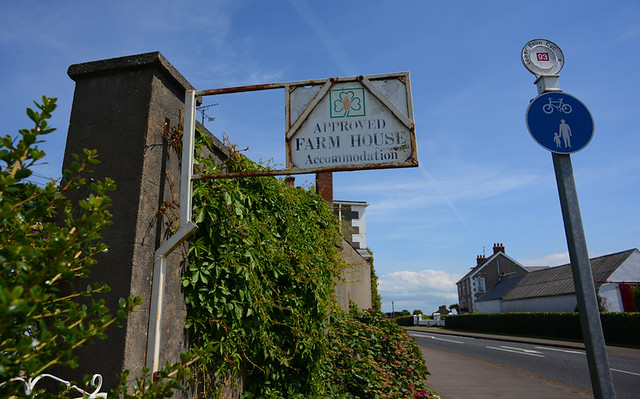 Some years ago, an Austrian friend planned a lovely bicycle tour around the west of Ireland. She put together a scenic route, booked rooms in B&Bs and hostels, took a week off work, flew overseas with her bike, and… had a miserable time! It rained every day, with visibility so poor she could hardly make out any of the scenery, and winds so strong she struggled to complete her daily milage. After a few days of this and with the forecast promising more of the same, she decided it might be better to stop and hang out locally instead of continuing to tour. So she tried to extend her stay at the B&B she'd last spent the night and cancel her other reservations. Unfortunately the B&B had no room for her to remain there for extra nights, and some of the places she'd booked ahead would not allow last-minute cancellations. She was essentially locked into continuing her tour. And she did, returning home with a pannier full of soggy clothing and pictures of blurry rainscapes. Now whenever someone mentions touring in Ireland, she grimaces and tells this cautionary tale. It was in fact what influenced me to pick a place and use it as base-camp for day trips, instead of touring from point to point, when I first visited in 2012.

The thing about bicycle touring in Ireland, is that you have to be kind of flexible. There are stretches of beautiful, sunny weather here. And there are stretches of stormy, miserable weather. If you plan too far in advance or too rigidly, you might be committing yourself to a trip consisting entirely of the latter. And while normally I don't mind cycling in the rain one bit, with touring it's more than about being cold and wet. It's about wanting to experience the local scenery by bike. If all you are seeing is mist and sheets of rain, that rather defeats the purpose!

Luckily for me, I do have some flexibility. What working freelance lacks in income, it makes up for in allowing for a degree of scheduling freedom. And so this summer I'd love to take advantage of this and try a little mini-tour. Nowhere far or exotic, but maybe to this little spot I like in County Sligo, just over 100 miles away. One day last month, when the forecast for the next few days looked good, I thought "Great, this is it!" and began to phone up B&Bs and hostels. But my spirits were quickly deflated when it turned out that most of them were booked, with the ones that weren't either costing a fortune or inconveniently located. Planning has its perils, but apparently so does spontaneity.

There are other options of course, such as camping and asking around for contacts of people to stay with. One friend has even told me that he's toured all of Ireland, making no plans in advance what so ever but simply knocking on farmers' doors every evening. They would usually have a spare room where they'd let him crash - sometimes for a modest fee, and sometimes free of charge. I don't think I'd be quite comfortable with that, but it's nice to know that people can be so hospitable.

For those experienced in touring, what are your strategies for securing accommodations? Do you book in advance, or take off and hope for the best? Do share your stories!
Labels: Ireland touring