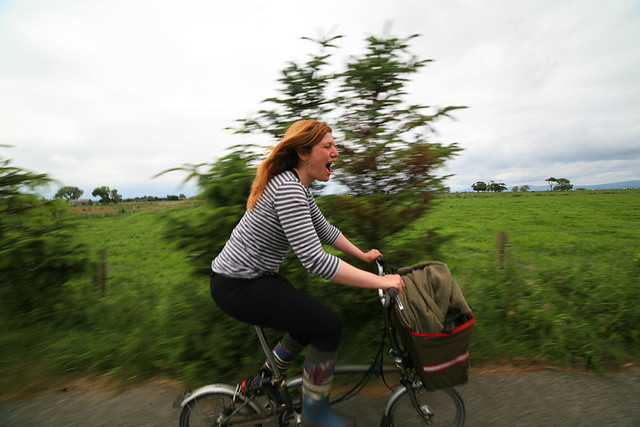 Last week some bicycle bloggers and forumites were passing around a link to a funny post on Vox.com. Entitled The 19th-century health scare that told women to worry about "bicycle face," it brings to light an article circa 1897 written by a medical doctor that warns ladies who pedal against producing a "wearied and exhausted" facial expression. So unattractive!

Of course the title and content of the article immediately made me think of the popular online comic Bikeyface, whose author sees the matter differently. To her, a "bikeyface" is an expression of unbridled joy, rather than a pained grimace.

It's a cool idea, though anecdotal evidence gleaned from my own experience gives me pause.

Thinking back to the days before I began to ride a bike myself, my impressions of transportation cyclists fluctuated depending on what country I was in. I remember observing cyclists in English cities and finding their demeanor alarmingly aggressive. And I remember thinking that people on bikes on the East Coast of the US looked huffy-puffy and stern - as if what they were doing was both very difficult and very important. On the other hand, watching cyclists in Austria, Holland, Belgium and France, I  do not recall finding their facial expressions remarkable in any way. Some people looked happy, some looked sad, some annoyed, bored or lost in their thoughts - but none of these states seemed to have anything to do with them being on a bicycle. Cycling in its own right was matter of fact, causing neither bliss nor wearied exertion.

Interestingly, I first noticed the "bikeyface" - in the joy/bliss sense of the word - in myself, catching my grinning reflection in a storefront as I cycled shakily past. And with the rise of the city/transport/ cute bike movement, I did begin to spot other cyclists in the Boston area with this stamp of bliss on their physiognomies. Increasingly, that, as well as the continental European indifference, are if not replacing then at least generously supplementing the super-serious look that first dominated in those parts.

What this extremely unscientific sampler of impressions tells me, is that the faces we make while pedaling may depend less on cycling in itself than on our attitudes toward it - which can vary tremendously. Today, cycling can be perceived as a risky athletic activity, a fashion statement, a political act, a way to relax and have fun, an independent means of travel, or as any combination thereof. Unsurprisingly, the facial expressions these attitudes yield will differ. And in cultures where transportation cycling is so normalised and easy as to be unremarkable, we are as unlikely to see the bicycle face against which Victorian doctors admonished as we are to see the bikeyface which pedaling enthusiasts promise.

By now, cycling really should be normalised for me. After all, I do it in some form or other nearly every single day. But even when riding my bike in entirely mundane circumstances, on occasion I still catch myself grinning. What can I say? I love it.

Stranger though is the habit I apparently have of smiling even when I am not having fun on the bike. Several friends have now pointed this out to me, but it seems that when I am having a particularly difficult time on a roadbike I tend to smile in leu of displaying the "pain face." This gives the impression that I am far hardier than I actually am and that I am enjoying myself, creating genuine puzzlement among my companions when I later tell them I was struggling or suffering. "But you seemed so happy! - see?" And sure enough, a snapshot will be produced showing my red face distorted by a mad grin. As I never remember doing this, all I can say for myself is that smiling must be a coping mechanism - à la the facial feedback theory: Research has shown that if our muscles contort in a way consistent with a specific emotion, we can genuinely feel some dose of that emotion regardless of whether it is situationally appropriate. So the smile must be my way of saying "I will not surrender to the pain face! If I smile, then I won't be miserable…"

Thankfully most of my time on a bike gives me no cause to employ this technique and my grins on two wheels are, for the most part, quite genuine. Is there such a thing as a bikeyface? Perhaps not once we control for other factors. Nonetheless in me it is alive and well. When I catch myself doing it, it feels silly and embarrassing - though I am hardly complaining that cycling makes me happy!
Labels: silliness social commentary