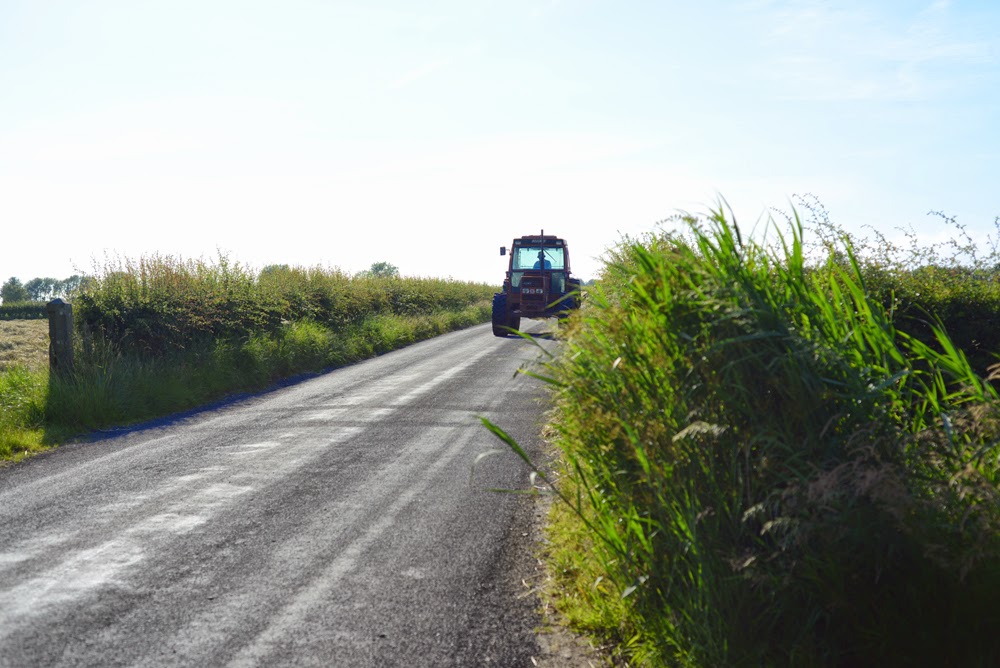 Today something amazing happened to me on the way into town. I was cycling though the countryside,  half way through my usual 7 mile commute, when behind me I heard the put-put-put of a tractor. I scooted over toward the hedges and slowed down, to make it easier for the cumbersome heap of metal to pass me. And it did, huffing and creaking as it maneuvered around me on the narrow winding road. It was one of those smallish things with a flat-bed at the rear, piled high with freshly cut grass. These types of machines are not meant for the road and they move slowly - faster than a typical bicyclist, but closer to bicycle speed than car speed. In the cabin, the driver gave me a friendly wave as he passed. He then made some other gesture I could not make out and slowed down. I did not understand what he wanted at first. Why did he pass me only to slow down to a speed slower than mine? Soon I was a foot behind him and applying brakes. Now what? If I pass him, we will only play leapfrog.

Confusing me further, at this point the driver turned around, made eye contact and gave me a thumbs up. Then he began to speed up again. I followed suit, and as I did, it finally hit me what was happening: He was offering me to draft him!

Quickly I scanned the back of the tractor.  A metal ledge and a pile of cut grass; no sharp edges to impale myself upon. This was crazy, but what the heck!

As he increased his speed, I followed suit and increased mine, so that the distance between us remained the same. I did not have my computer, but by feel alone I could tell I was traveling faster than I would on my own power. It was just like riding in a paceline, sort of.

Occasionally, the driver would turn around and give me a questioning nod, like "speed still okay?" And I would reply with a thumbs up.

Cruising along at what was probably 25mph on my folding bike, I spun madly in my high gear feeling little resistance. It was just like that scene in Breaking Away, sort of. I kept expecting him to stick his fingers out the window to challenge me to daredevil speeds - three fingers, four, five! Alas, the rickety farm vehicle was no more capable of such feats than I.

At the next roundabout, the tractor turned off and I rolled into town, beside myself with giddiness in the flickering sunshine. There are plenty of drafty mornings. But not quite like this one.
Labels: cars rural cycling stories