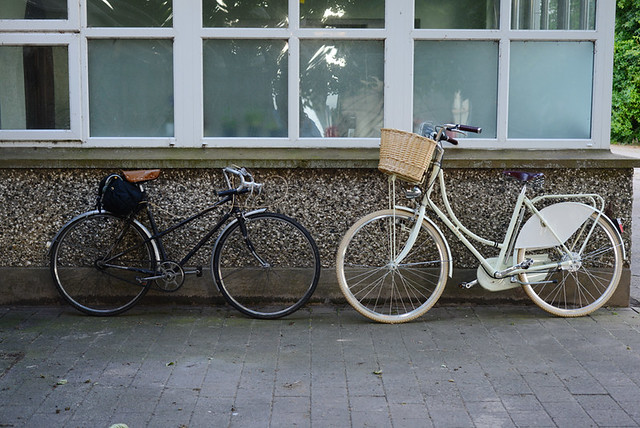 42 centimeters, or nearly 17 inches! Any guesses what that figure refers to? Go on, think about it before I tell you. Anyone?

Over the past few weeks I've had under my guardianship two step-through bicycles that could not be more different from one another: a vintage Claud Butler Lady Lightweight that belongs to a friend, and a modern Mosi Carolina that was sent to me for review by the manufacturer. The former was essentially designed as a time trial bike (according to 1930s notions of what that entails) with all-arounder capability; the latter as a Dutch-style urban commuter. Switching back and forth between these machines has been an interesting experience - especially considering that 42cm is the difference in their handlebar heights! In fact I don't think I've ever ridden a bicycle that's quite as upright as the Mosi or quite as low-leaning as the Claud Butler. And to think that both of them can be described as step-throughs or "lady's bikes" - evoking a similar image while in reality being so different.

And yet, despite these differences what I found most striking about the two bikes was an attribute they had in common, aside from the low step-over: Both felt absolutely amazing to ride. Amazing in an entirely different way form one another, but amazing nonetheless, with each machine's handling feeling "just right" in the context of what that bike was meant to be. This is something not many people think about unless they are involved with product design or product reviews. But it is a core criterion based on which a product can be judged as successful.

Recently, I was talking to a Belgian acquaintance who owns a shop selling European utility bikes, and who is also a former amateur road and track racer. In his opinion, if a Dutch-style bike feels "too upright" (and size/weight/fit are eliminated as the culprit), it is because there is a flaw in that model's design. A well-designed bicycle of its kind should feel as if it's supposed to be that upright, evoking an "Ooh, this is very different but very nice" type of reaction from even the roadiest of roadies, as opposed to a request to slam the stem. Similarly, a well designed utility bike of this type should not feel slow-rolling in action; subjectively it should feel as if its speed is just right for how fast you want to go while riding in that position. And he applies the same principle to what they refer to in continental Europe as "sports bikes" - that is, road-racing or touring bikes with drop bars. In theory, even to a rider new to the sporty side of cycling, a well designed roadbike should feel intuitive and safe after a minimal initiation period. If it doesn't, something is off.

For the most part, I think I agree with this way of putting things. Though my own cycling experience so far is limited to just over 5 years, I've crammed a lot of pedaling time and a great number of bikes into those years. I have ridden bikes that did not feel "just right" to start with and so I'd try to wrangle them into being just right with mixed (usually not entirely successful!) results. I have also been lucky enough to ride bikes that have felt exactly right from the get-go. And the thing is, once you've had that experience you know it's possible. You know that not all bikes of the same category, even if they look similar and are similarly priced, are in fact the same in how well they perform the function they were designed to perform.

Whether it is a city bike or a racing bike, or something in another category entirely, when a bike feels right we tend to know it. Sometimes it really is black and white.