2 Wheels, 4 Legs: a Study in Attitudes 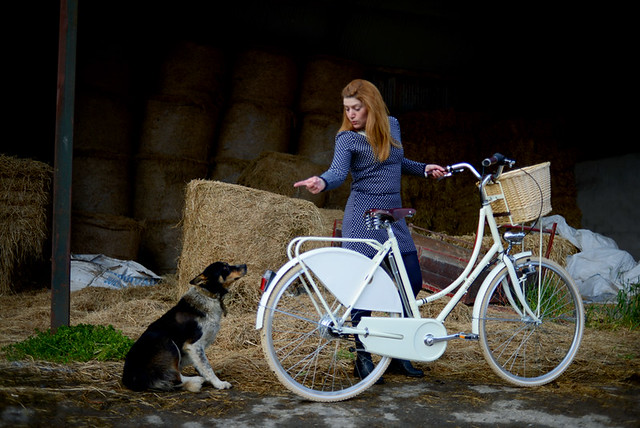 Since the very start of this blog I have shared random, at times ludicrous thoughts about pets and bicycles. But never have I been around such a large number of animals as now that I live in rural Northern Ireland. From being held up by bovine traffic jams, to getting my bicycle grips eaten by shameless Shetlands, to herding wayward lambs, to being herded myself, I've had enough experience with animals on my bike to last a lifetime. What interests me about the whole thing, is the mere fact that animals react to bikes in the first place. For instance, when I pass a sheep, horse or cow on my bike, I could swear that they pay more attention and study me more intently then were I to pass on foot or in a car. Perhaps this is because the hybrid two wheeled beast is a relative novelty for them, and thus warrants a closer look that the beasts they are familiar with. Or perhaps it's because animals, with their natural instincts, know a good thing when they see it. Would it be taking things too far to suggest a look of wistfulness comes over their faces as I roll past?

Okay, maybe. All the same, certain patterns of behaviour are fascinating to observe - in particular among felines and canines. I live next door to a farm that is home to a handful of dogs and at least 40 barn cats. Whenever I ride, photograph, wash, maintain, or even park a bicycle outside my house, a good few of them come out to get involved. The dogs' behaviour in these circumstance is that of would-be participants. If I ride, they want to come along. If I work on the bike, they want to help. If I take photos they volunteer themselves as models or even try to paw the camera as if to advise on settings and composition. They are like that hapless, enthusiastic brand of intern every employer dreads, whose eagerness to help is matched only by their talent for getting in the way. And, hard as I try to explain that I do not require assistance in this particular project, they remain undeterred until they run out of energy and wander away on their own accord, off to pursue the next thing to catch their attention. 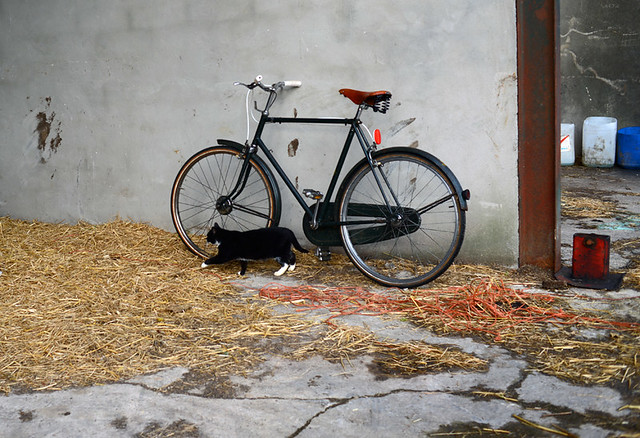 The cats, on the other hand, seem to think their job is to evaluate the machine. Whereas the dogs communicate joy at the sight of any bike that appears in front of them, the cats express caution and extreme skepticism. "What is this thing you've brought here? Better stand back till I examine it."

And with an air of a put-upon expert who is nonetheless ethically committed to doing a job thoroughly, they circle the bike in slow motion, meticulously examining every inch, rubbing and sniffing and furrowing their brow as if taking copious mental notes, until finally they express readiness to pass judgment upon it. And that judgment is rarely simple in nature. Oh they have something to say about the bike, you can be sure of that. Question is, can you be counted on to comprehend their profound findings? "Pssht, why do I even bother," the cat's face finally says. And with an air of mild disgust the feline expert strolls away unhurriedly - returning every now and again to supervise, just in case you totally mess up whatever silly thing it is you are planning to do with this piece of equipment. "Certainly this job is beneath me," says the peevish flick of their whiskers, "But if I don't help you, who will? Certainly not that cretin, the dog..."
Labels: animals silliness